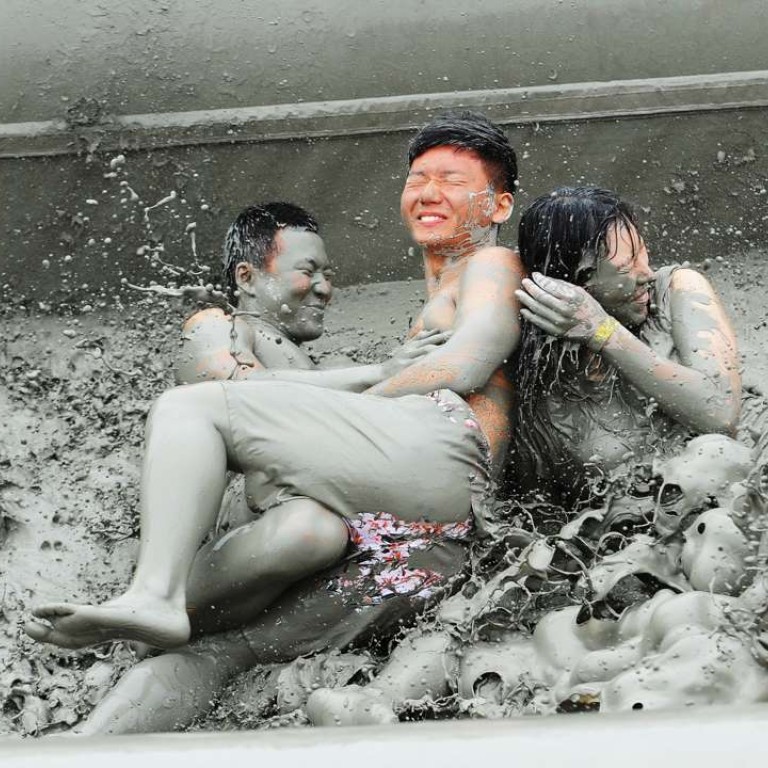 Whether it’s for therapy or fun, who doesn’t love a splash-around in the mud?
Culture /  Music

Once a little-known event held to promote the area’s mud-based cosmetics, an influx of foreigners has given cachet to this merrymaking in the muck. This year organisers are wooing Chinese visitors 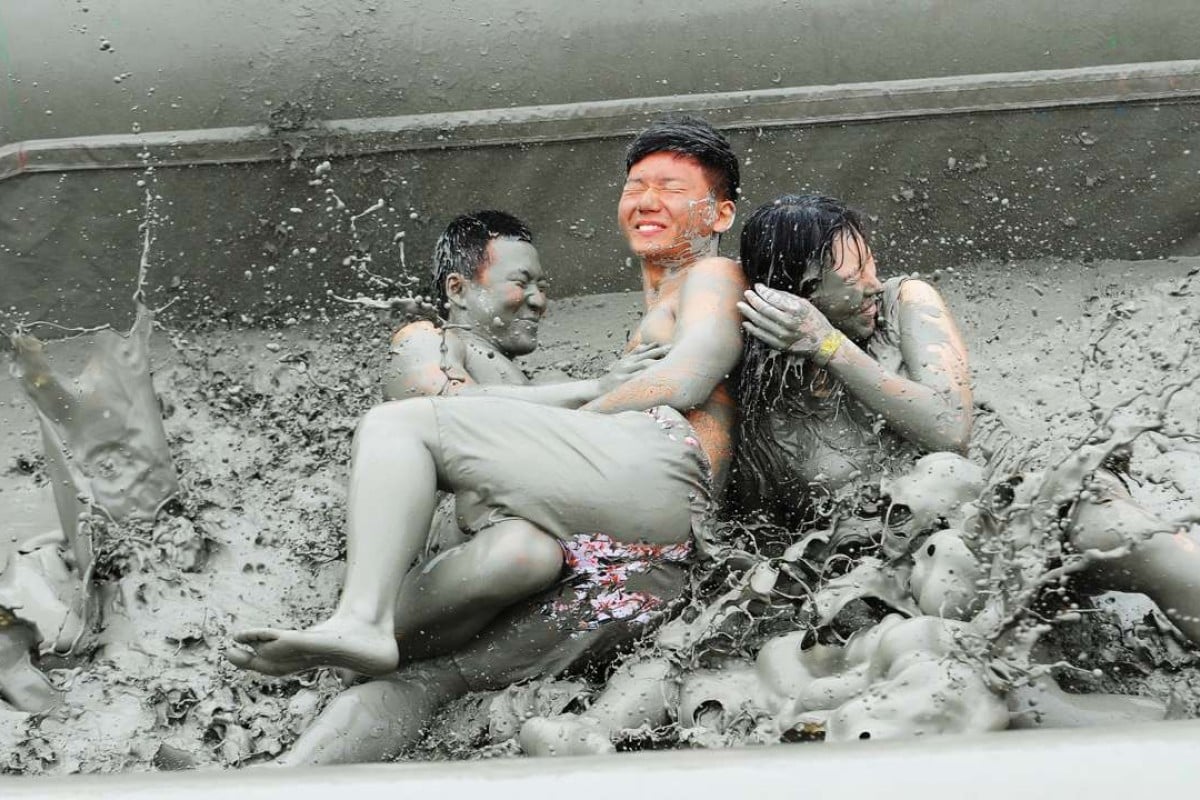 Whether it’s for therapy or fun, who doesn’t love a splash-around in the mud?

This summer, thousands of tourists will flock to South Korea not for shopping, cosmetics, or the food, but simply to party in the mud.

Face-painted revellers give a thumbs-up to the fun at last year’s event.

The festival, which runs from July 15-24, is one of the largest mud festivals in the world. The 19th edition of the event is expected to attract 3.2 million visitors, including 30,000 international tourists, to Daecheon Beach in Boryeong , a city about 2½ hours from Seoul.

During the daytime, the festival is mainly family-oriented and features spa-related activities such as mud bathing and relaxation massages, along with child-friendly games such as mud hand-printing, face-painting and an amusement area known as mud kids’ land.

However, by evening, the landscape changes as the beach turns into a party for thousands of tourists and locals, with K-pop performances, rock shows and the event’s signature “hip hop rave parties”.

The 7 best music festivals of 2016 in Asia, starting this weekend

“The atmosphere is one big party. Not in a bad way necessarily, but there are many drunk people everywhere [day and night]. But it’s like that at every festival, right?” says Heidi, a 28-year-old Norwegian student who has attended Boryeong in the past.

An enthusiastic crowd gets the party started at last year’s festival.

Organisers of the festival – which is partnered with Spain’s tomato-throwing La Tomatina Festival, and will celebrate the connection by also featuring a tomato pit – have come to terms with the general rowdiness. “We have some drunken streakers and nudists each year,” admits one representative, “but we are quick to alert security and the police, who handle these situations.”

For such a hedonistic event, the Boryeong Mud Festival unexpectedly evolved from quite holistic beginnings.

Boryeong, located on the mid-western coastline in South Chungcheong province, used to be a quiet city and received few visitors before the festival began. According to the event’s founder, Song Jeong-hoe, the region held few attractions besides Daecheon, a 3.5km stretch of white-sand beach.

Entertainers stir the crowd at the Boryeong Mud Festival.

In the mid-1990s, the local government and businesses decided that the high-quality mud from the Yellow Sea could become the region’s greatest natural resource. As mud is believed to have healing qualities, the local variety was tested and found to be rich in minerals. Mud packs, or clay masks, are a major beauty product in South Korea and come in regional varieties – the most famous is Jeju Island’s “volcanic clay masks”.

“Our Boryeong mud masks and soap products were not well-known in Korea,” says Song. “It cost a lot of money to advertise our local products, so we came up with the idea of promoting our mud-based cosmetics through a local festival.”

There’s no disputing the rising popularity of the Boryeong Mud Festival among mud worshippers the world over.

The first event was held in 1997, the same year the Asian financial crisis began; South Korea was one of the worst-affected nations. “We didn’t have much of a budget,” says Song. “We used styrofoam to make our mud slides and [makeshift] safety guards. We were not a popular festival among Korean visitors – it was an unconventional [event for them].”

Despite all the mud-related activities the city promoted, few visitors came – that is, until foreigners entered the equation, says Boryeong city mayor Kim Dong-il. “Until our seventh year, the festival was still a domestic event,” says Kim. “Then, some foreign visitors came and actually [participated in the activities], got into the mud, and Koreans soon followed.

“Now everyone has started participating. The main reasons why tourists like to get involved is because they can relieve their stress while playing in the mud, and secondly they can enjoy the healthy benefits of the mud.”

Everybody on board for the clay conga line.

Festival founder Song admits to being somewhat disappointed when the festival evolved from a health event into a fully fledged beach party. “We were a bit upset in the beginning because we started this festival as a way to promote cosmetics, but now the festival’s mud-related activities have overtaken the popularity of the cosmetics products.”

Local businesses stand to earn over US$60 million from the festival this year, according to organisers.

Despite all the hype, the festival does have its critics. One Korea-based English blogger has written that the event promotes negative stereotypes of both foreigners and Koreans.

“First, Koreans are led to believe that foreigners enjoy wallowing in the mud like pigs and that the idea must sound appealing to all of them. Second, it warps perceptions of Korean culture among the foreign participants and foreign media. The image it presents is not congruent with reality.”

Still, there’s no disputing the rising popularity of the Boryeong Mud Festival among mud worshippers from around the world, or the financial windfall it brings the town – local businesses stand to earn 70.1 billion won (US$60.8 million, HK$465 million) this year, according to organisers.

Young Koreans get into the spirit at one of the largest mud festivals in the world.

Mayor Kim says the festival hopes to attract more visitors from China this year. “Thirty per cent of foreign visitors should be from China. We plan to offer Chinese visitors a 20 per cent discount on all mud products, as well as free in-town transportation services for parties of 20 or more people.

Organisers are promoting the festival as “an exciting experience with citizens from around the world”, Kim says during a press event in Seoul’s main shopping tourism district, Myeong-dong. “We have prepared more than 60 activities this year, including a 100-metre mud slide. There will be a huge party on the beach, with flash mobs performing dances [every couple of hours].”