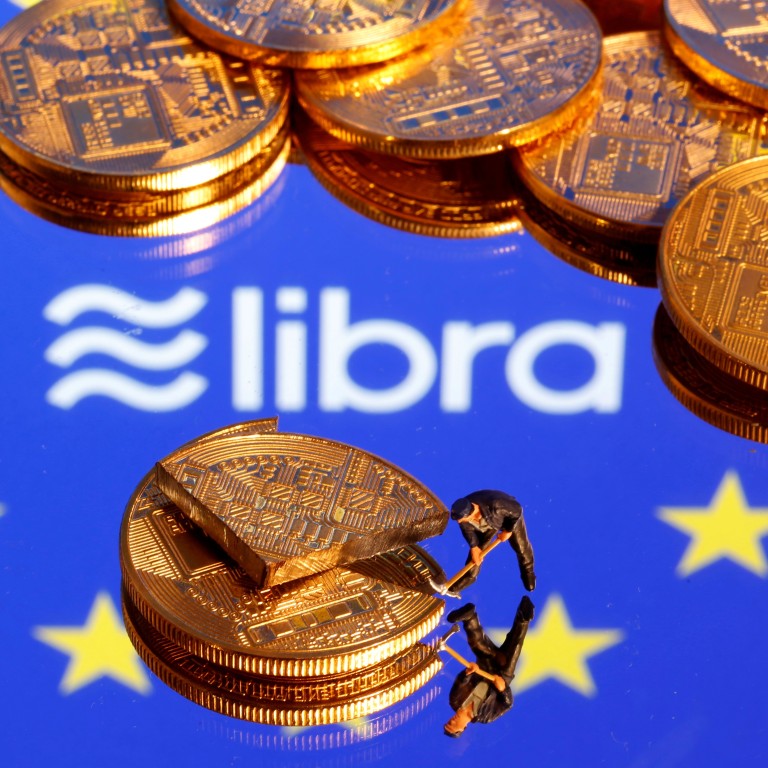 The People’s Bank of China said it made “smooth progress” on the development of a sovereign digital currency in 2019. Photo: Reuters
Economy /  China Economy The People’s Bank of China said it made “smooth progress” on the development of a sovereign digital currency in 2019. Photo: Reuters

China’s central bank said on Sunday it will continue with its research and development into the creation of a sovereign digital currency in 2020, but fell short of saying when it might be launched.

In a summary of its annual work conference held last week, the People’s Bank of China (PBOC) said it made “smooth progress” on the issue in 2019.

The PBOC was one of the first central banks to promote the idea of a
digital sovereign currency,
partly because Beijing regards cryptocurrencies like bitcoin as a threat to financial security, and other digital currencies, like Facebook’s Libra, as a challenge to its capital account controls.
When the bank’s
digital currency
research institute stepped up its rhetoric on the issue last year – after plans for Libra’s launch were announced in June – there was speculation that a Chinese sovereign currency could arrive as early as November.

A report by Forbes in August, citing an unidentified source, said the cryptocurrency was set to be launched on November 11 to coincide with the Singles’ Day online shopping promotion, but that did not happen.

The PBOC is not alone in the world in considering how best to adapt to digital currencies.

Sweden’s Riksbank said last month it had awarded a one-year contract to professional services firm Accenture to build a pilot platform for a new digital currency called e-krona, with the aim of broadening the central bank’s “understanding of the technological possibilities”.

But it might still be some time before a currency is launched, as the bank said the pilot project may be extended for up to seven years.

Also last month, Bank of Japan governor Haruhiko Kuroda said that while the country had no immediate plans to issue a digital sovereign currency, as there was no demand for one, the bank would conduct “technical and legal research” into digital currencies.

While the PBOC, which has been considering the possibility of a sovereign digital currency for about five years, was reticent about an issue date, Mu Changchun, the official in charge of its development, was quoted by Shanghai Securities News last month as saying that the “top-level design, formulation, functional research and testing” of the digital currency electronic payment, as it is formally known, had been completed.

Also in December, Chinese business magazine Caijing reported that the country’s big four state banks – Industrial and Commercial Bank of China, China Construction Bank, Agricultural Bank of China and Bank of China – and three state-owned telecoms firms had been involved in the development process. The government, however, has not made any formal announcements about its partners on the project.

One of the biggest concerns about digital currencies is how they will be received by businesses and the public.

Mu said that China’s sovereign digital currency was intended as a replacement for cash but not designed for speculation.

Critics have said that such a situation could lead to confusion, as the currency would neither offer the convenience of the already ubiquitous electronic payment services available in China nor would it be useful as a hedge against inflation.

Sign up now
for our 50% early bird offer from SCMP Research: China AI Report. The all new SCMP China AI Report gives you exclusive first-hand insights and analysis into the latest industry developments, and actionable and objective intelligence about China AI that you should be equipped with.
This article appeared in the South China Morning Post print edition as: PBOC makes ‘smooth progress’ on digital currency
Advertisement
Comments

Zhou Xin co-leads the political economy team at the Post. He mainly covers economic stories but also writes about Chinese politics and diplomacy. He has previously worked for Reuters and Bloomberg in Beijing.