Why you can trust SCMP
Link Copied
1 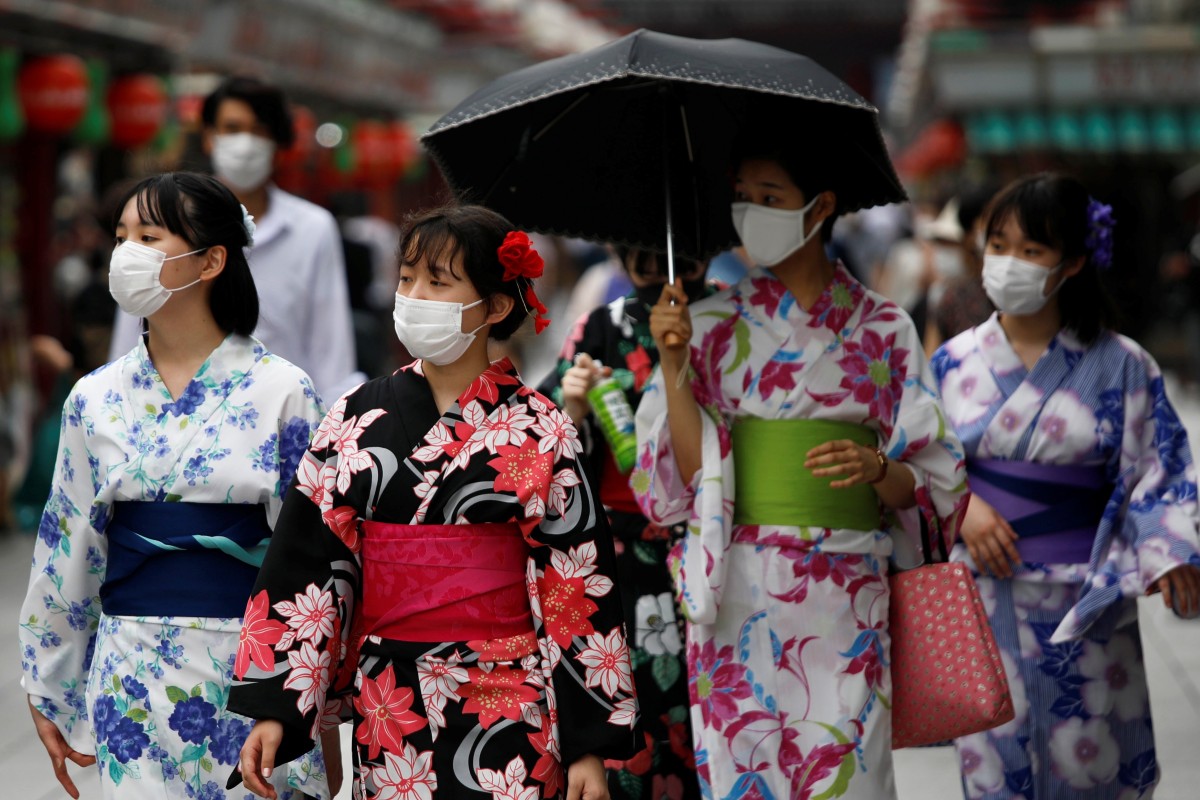 Women in yukata walk along Nakamise Street at Asakusa district, a popular sightseeing spot in Tokyo. Photo: Reuters
Prime Minister
Shinzo Abe
on Wednesday said Japan will begin talks to resume business travel with about 10 countries and regions, including China, South Korea and Taiwan, easing entry bans currently in place to stem the spread of the novel
coronavirus
.

Abe also indicated the government would begin considering conditions of entry for athletes and other individuals involved with the Tokyo Olympics and Paralympics, now due to kick off a year from Thursday.

The Tokyo Olympics will take place in 2021 due to the coronavirus pandemic. Photo: Kyodo

Japan presently has an entry ban in place for 129 countries and regions. The government is aiming to proceed with preparations for the Tokyo Games as the economy gradually reopens.

The government plans to progressively ease entry bans for employees of foreign firms in Japan, and overseas students who have a status of residence.

Japan is also expected to start talks on easing travel restrictions with Brunei and Myanmar, which have the pandemic under control. The Abe government has already begun similar discussions with Vietnam, Thailand, Australia and New Zealand.

Abe’s announcement came after the governor of Tokyo on Wednesday told residents to avoid unnecessary trips outdoors, as the city surpassed 10,000 coronavirus cases ahead of a four-day holiday weekend.

Japan’s capital had another 238 cases on Wednesday, as the country heads into a long weekend that was originally scheduled to celebrate the start of the now-postponed Tokyo Olympic Games.

“This long weekend is going to be critical in preventing further spread of the virus,” Koike said in a briefing.

Hospitalisations in Tokyo have jumped almost five-fold over the past month. Fourteen of those hospitalised were listed as serious cases, in an ICU or on a ventilator, and the city has had recorded two deaths in the past month. Tokyo had more than 3,800 cases so far this month, higher than the previous peak in April when the city entered its state of emergency.

South Korean soldiers check the temperature of a driver at a checkpoint of a military base in Daegu. Photo: Yonhap via AP
In
South Korea
, the number of American soldiers who have contracted the coronavirus rose to 111, after authorities on Wednesday confirmed another 12 US service members had tested positive for the virus upon arrival.
Advertisement

The dozen soldiers had all arrived at Osan Air Base in Pyeongtaek, south of Seoul, on US government-chartered flights from their home country on different dates across July, Yonhap reported.

“All individuals were transferred to an isolation facility designated for confirmed Covid-19 cases on Camp Humphreys upon testing positive,” the US Forces Korea said in a statement. “Thorough cleaning of all transportation assets and quarantine rooms has been completed.”

Earlier in the month, dozens of other newly arriving service members, dependents and others had tested positive for the virus, Yonhap reported.

South Korea has recorded about 13,900 coronavirus cases and 297 deaths.

A volunteer health worker uses a ‘smart helmet’ equipped with a thermal scanner to check the body temperature of residents in Mumbai. Photo: AFP
India
has called off a historic Hindu pilgrimage to a holy cave high in the snow-capped mountains of disputed Kashmir for the first time, as coronavirus cases continued to rise on Wednesday.
Advertisement

There were 37,724 new cases reported in the past 24 hours, according to federal health data. India has reported about 1.2 million cases overall, behind only the United States and Brazil.

In New Delhi, at least one in four are infected with Covid-19, study says

Organisers of the Amarnath Yatra, where saffron-clad Hindu ascetics walk 46km to the cave across glaciers and waterlogged trails, said a “very sharp” spike in virus cases had forced the cancellation.

“The health concerns are so serious that the strain on the health system, along with the diversion in resources to the Yatra, will be immense,” said a statement by the organising committee released on Tuesday.

A strict lockdown was reimposed in Kashmir – also claimed by neighbouring Pakistan – on July 12 after a major spike in cases and deaths. Shops and businesses are shut, and in most parts of the main city of Srinagar roads are sealed and people are not allowed to leave their homes.

Face masks will become compulsory from Thursday for Australian residents in lockdown regions when people leave their homes. Photo: EPA-EFE

In Australia, hard-hit Victoria state reported a record 484 new infections on Wednesday, as Melbourne entered a second week of lockdown.

“We can’t necessarily expect numbers to go down. I think that will be an even greater challenge in days ahead,” he said. “That means that we’re going to look at 500-600 cases per day. I absolutely don’t want us to go there.”

Daniel Andrews, the state premier, said people had to self-isolate when they became sick.

Face masks will become compulsory from Thursday for residents in lockdown regions when people leave their homes.

Australia has recorded some 12,500 coronavirus cases and 126 deaths since the pandemic began.

A Thai fruit seller seen on a street in Bangkok, Thailand. Photo: EPA-EFE
In
Thailand
, a state of emergency will be extended until the end of August, a senior official said on Wednesday, even as the country has gone two months without local transmission.

“It is still necessary to have the decree because we are opening up the country for more business meetings and tourism to stimulate the economy,” said Somsak Roongsita, secretary-general of the National Security Council, adding that doctors had requested it be maintained.

The extension comes after a weekend where
political protests
took place against the government, in defiance of a ban on gatherings. Somsak, however, said the emergency decree would be used only to contain virus outbreaks and not rallies.
Meanwhile, in
Indonesia
a majority of the nation’s citizens oppose the continuation of strict social distancing orders to contain the coronavirus, according to a survey.

The government should prioritise efforts to revive the economy rather than tackling the virus’ spread, most of the participants in a poll conducted by independent surveyor Indikator Politik Indonesia said. Those opposed to tough mobility restrictions jumped to 60.6 per cent from 34.7 per cent in May, the July 13-16 survey showed.