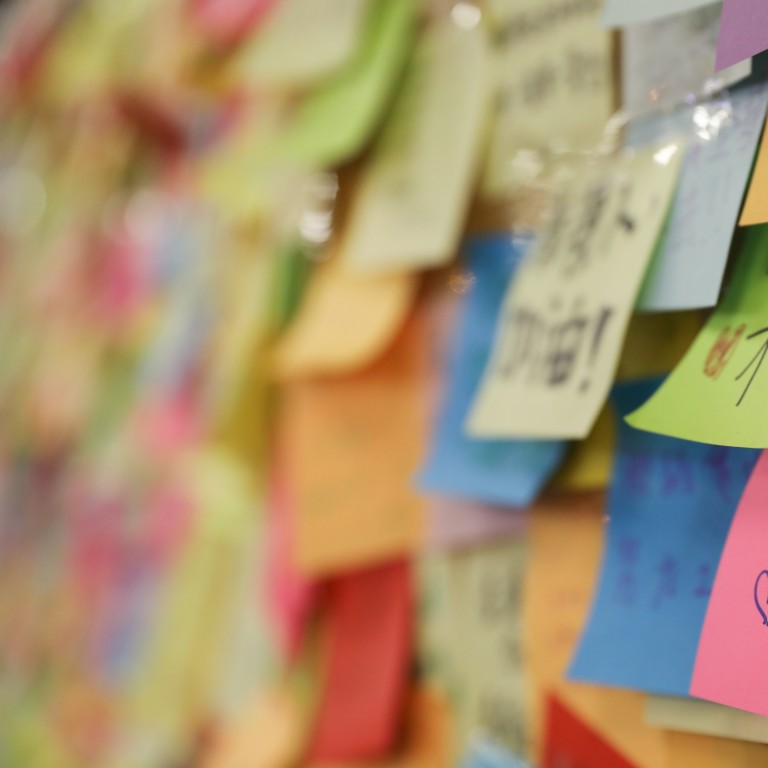 Protesters have taken to sticking messages on surfaces in the city to voice their opposition to the extradition bill. Photo: Sam Tsang
Hong Kong /  Politics

Why you can trust SCMP
Link Copied
107 Protesters have taken to sticking messages on surfaces in the city to voice their opposition to the extradition bill. Photo: Sam Tsang

More than 200 officers mounted an operation to remove messages exposing the personal details of police in Tai Po on Wednesday night as “Lennon Walls” sprung up across the city in support of those protesting against the contentious extradition bill.

An insider with knowledge of the operation said it targeted the infringement of police officers’ privacy.

“We did not want to remove all the messages, only those revealing phone numbers and addresses of police officers,” he said.

Explaining the large presence and why the officers had shields, the insider said: “There was a risk of hostility toward officers seen removing messages so we took precautions.”

Sparked in response to the government’s handling of the now-suspended bill, Lennon Walls have appeared in unlikely locations across Hong Kong.

Colourful collages of Post-it notes were a landmark feature of the 2014 Occupy protests with a Lennon Wall next to a staircase at the city’s legislature in Admiralty.

The original Lennon Wall was established in the 1980s in Prague, in the Czech Republic, and was covered with graffiti and lyrics inspired by the Beatles.

Tai Po district councillor Francis Yam Kai-bong confirmed officers went to the wall in a pedestrian underpass near Tai Po Market MTR station at about 12.30am on Wednesday.

Several videos online showed the operation did not encounter resistance from the public.

Another Tai Po district councillor, Au Chun-wah, said he went to the scene. Officers told him they were only dealing with a suspected case of a leak of personal information and did not remove any other messages or posters.

Au said there were no clashes or arrests.

Last week, nine people were arrested for online attacks and cyberbullying targeting police officers – including hate speech and death threats against officers and their families.

Swalikh Mohammed, superintendent of the Cyber Security and Technology Crime Bureau, said last week police had received more than 800 complaints from officers and referred about 150 of the cases to the privacy commissioner’s office for investigation.

An array of messages written and drawn on colourful paper appear on this Lennon Wall in Kowloon Bay, in scenes repeated across the city. Photo: Sam Tsang

A pedestrian underpass located outside the Tai Po MTR station and which leads to various bus stops was among the largest of the recent Lennon Walls.

Countless notes expressing support for the protesters or calling on the city leader Chief Executive Carrie Lam Cheng Yuet-ngor to stand down were handwritten by residents and passers-by.

To protect the messages, some volunteers covered the displays with plastic sheets.

Samuel Chu, a fifth former who volunteered in Tai Po, said he had one simple goal – to cheer everybody up.

“We are all frustrated. The ruling administration would have to step down in any other place if 2 million people thronged the streets,” he said. “It might just be a Post-it memo, but it is also a blessing to all Hongkongers.”

Tai Po resident and clerk Miu Chow, 32, said the tunnel display had grown after some postings were earlier removed.

“Even if the walls are covered, it will not get in anyone’s way.”

A Tsuen Wan wall catches the eyes of passers-by, many of whom make impromptu contributions. Photo: Sam Tsang

A German expatriate living in Tai Po, who asked not to be named, said it was his second visit to the tunnel this week.

“It is a peaceful and creative idea,” he said.

Elsewhere, in Kowloon, a Lennon Wall was erected under the nose of the deity Wong Tai Sin outside the entrance to the temple devoted to him.

Website in the works to display protesters’ notes from ‘Lennon Wall’

Isaac Pang, an 18-year-old student at the University of Hong Kong’s SPACE community college, helped set up the Lennon Wall over the weekend, which had collected thousands of messages.

“Hongkongers have gone through a very difficult time over the past month. Several people have sacrificed their lives for the cause, and the government still refuses to address any of our demands no matter what we did,” he said, referring to suicide cases in recent weeks said to be linked to the extradition bill protests.

There is little space for new notes in this Tsuen Wan display. Photo: Sam Tsang

“I hope the messages from the Wong Tai Sin residents could serve as a morale booster to the young people in Hong Kong so they can carry on the fight.”

But not everyone welcomed the Lennon Walls.

In Sha Tin, district councillor Yau Man-chun, of the political party the NeoDemocrats, said he was hit in the chest by a man while posting a note on the Lennon Wall outside Sha Tin MTR station.

Brief visits by a Post photographer also found Lennon Walls set up in locations including Admiralty and Siu Sai Wan on the Island, Kowloon Bay in Kowloon and Tsuen Wan, Shek Lei and Tin Shui Wai in the New Territories.

One based on the Lion King mocked how the word lion in Cantonese sounded like “king of tearing off paper” while another showed a solitary note floating in the ocean with the words Finding Memo imposed.

In a statement released on Wednesday night, police said the notes in Tai Po were removed because they showed officers’ personal information. The force also said exposing private data without consent was illegal, adding it would consider transferring the cases to the privacy commissioner.