New kid on the block Military Attack was the one to usurp a trio of familiar names as Horse of the Year and confirmed he would be a contender wherever trainer John Moore is allowed to take him. 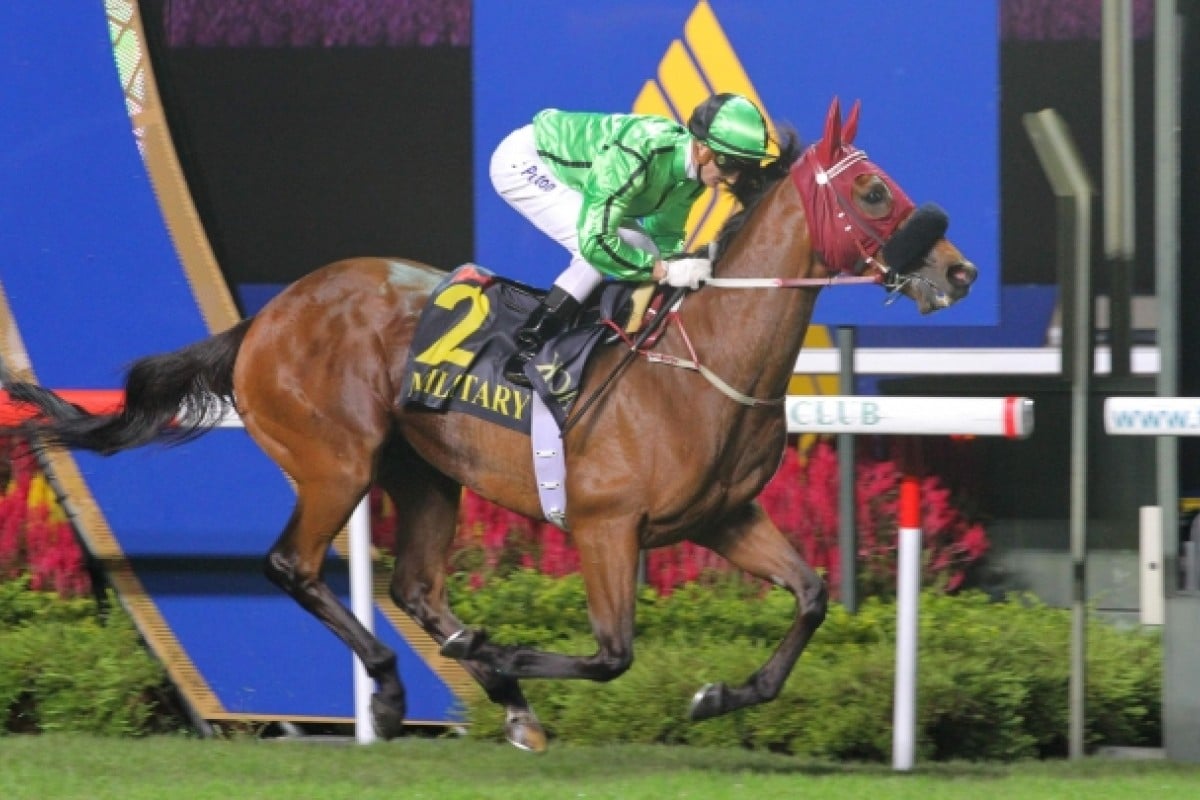 New kid on the block Military Attack was the one to usurp a trio of familiar names as Horse of the Year and confirmed he would be a contender wherever trainer John Moore is allowed to take him.

The individual achievements of Lucky Nine (champion sprinter) Ambitious Dragon (miler) and California Memory (stayer) would have been enough to clinch Horse of the Year in many seasons, but Military Attack's three Group Ones trumped all of them.

It was a decision to ride Military Attack handier, first implemented by Zac Purton in February's Citibank Gold Cup, which revealed a world-class competitor with deadly tactical speed. Then came Purton's brilliant ride in the Premier Plate, Military Attack lumping a big weight from a wide gate, before Tommy Berry jumped aboard for the Audemars Piguet QE II Cup. That might have been enough to clinch Horse of the Year on its own, but a brilliant win under Purton in the Singapore Airlines International Cup confirmed it.

Ambitious Dragon and Glorious Days staged a mini rivalry that ran parallel to the tension between their respective jockeys, Purton and Douglas Whyte, but when it mattered most on international day, the Dragon gave his rivals wind burn. Despite the lingering criticism that "there are two Ambitious Dragons", the six-year-old produced a career-defining display in the Longines Hong Kong Mile after a severe laceration threatened his participation.

California Memory won a second straight Hong Kong Cup, following a brave win in the Jockey Club Cup. The tough little grey's late-season heroics were a surprise though, a win in the Standard Chartered Champions & Chater Cup at his first time beyond 2,000m making him champion stayer.

Hong Kong took two of the four Group Ones on international day, Japanese machine Lord Kanaloa spanking his rivals in the Sprint, before Ronald Arculli's ownership of Red Cadeaux gave the locals something else to cheer about in the Vase.

The retirement of Entrapment and absence of Little Bridge left a void in the sprint ranks - and we're still waiting for a fresh new star. Frederick Engels, Time After Time and Rich Tapestry are not quite there, while last season's boom griffin, Amber Sky, didn't make the expected leap, and Joy And Fun and Eagle Regiment are race-to-race propositions because of age and injury.

Packing Whiz hinted he could be the next dominant miler, but was flat in the Champions Mile. Dan Excel claimed a deserved Group One instead, and despite the race being derided for its lack of international involvement, the winner showed he would be a factor in future big races. Even the four-year-old crop was hammered for its perceived lack of quality - It Has To Be You was a 125-1 winner of the Classic Cup, while the Richard Gibson pair Akeed Mofeed (BMW Hong Kong Derby) and Gold-Fun (Classic Mile) failed to measure up against older opposition.

History tells us that a new star will soon be born. A glance through Moore's list usually reveals some future big-race contenders, the likes of Designs On Rome, Flagship Shine and Able Friend. And from the other stables? All You Wish, Bobo Dragon and Sea Dragon all seem likely to make a leap into Class One.