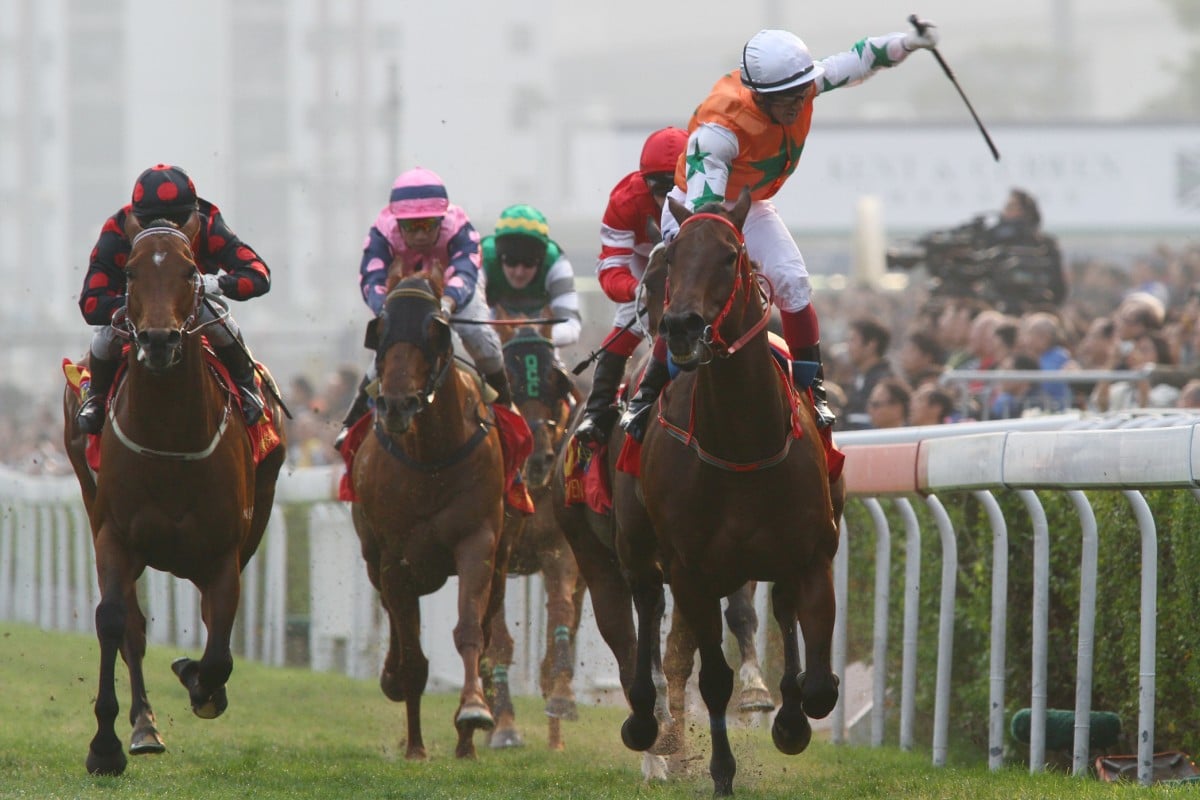 Eagle Regiment beat Frederick Engels in the Kent & Curwen Centenary Sprint Cup at Sha Tin in January and can do so again today. Photo: Kenneth Chan

One of the great features of racing in this jurisdiction is seeing elite horses tested by carrying big weights in quality handicaps – and in Tuesday's Sha Tin Sprint Trophy, Manfred Man Ka-leung’s multiple Group One winner Eagle Regiment gets his chance.

Eagle Regiment may be one dimensional, but the one thing he can do, and does very well, is barrel up the Sha Tin 1,000-metre straight course with sustained speed, like a prime mover clicking through the gears.

Today, the six-year-old lumps top impost of 133 pounds against nine rivals. It is a field, for the most part, that is well exposed at this level with a notable exception – the Tony Cruz-trained California Bounty – representing one of the lightweight threats.

In the past 10 years only one horse has managed to carry 133 pounds and win this Group Three and that was four-time champion sprinter Sacred Kingdom.

That shows it is a race favouring horses on the way up, rather than those who have reached the mountain top already, but if Eagle Regiment can produce his best, it is doubtful any of his competitors can physically match his pure straight-line speed.

Eagle Regiment is relatively lightly raced, courtesy of injuries and an inability to take a turn. But in his 13-start career he has proved nearly impossible to beat up the Sha Tin straight, notching all seven of his triumphs there from 10 attempts and never finishing worse than second.

Throw in a third in the Group One Al Quoz Sprint over the five-furlong course in Dubai – off a less-than-ideal preparation – and you have a serious straight-course resume.

Eagle Regiment hasn’t raced since World Cup night at Meydan nearly six months ago, but there’s nothing on his veterinary report to suggest there has been any setbacks, and a recent trial where he accounted for five of today’s rivals, one of two lead-up trials, was encouraging.

The big gelding has returned from a long lay-off to win previously, taking his second straight Group One Kent &Curwen Centenary Sprint Cup at the start of the year after nearly 12 months on the sidelines.

Barrier draws have become as crucial in straight races as for those on the circle, as runners crowd to the clearly favoured grandstand side. Eagle Regiment didn’t fare too badly with six; the worst-case scenario for jockey Olivier Doleuze seems to be sitting two horses off the fence, with “pocket rocket” and new-horse-on-the-scene California Bounty (Matthew Chadwick) likely to try to hold him out.

Coming off three straight wins to end last term, and getting 16 pounds from the top weight, California Bounty fits the profile of the rising star favoured under the conditions.

Although the three-year-old went head-to-head with Eagle Regiment in a recent trial, it seemed like the older horse comfortably had his measure.

The other big lightweight hope is Vital Flyer, aiming to become the first back-to-back winner of the race, and carrying the same 113 pounds he did 12 months ago. Also in his favour is the draw (nine), from where Karis Teetan can stalk the two likely leaders.

Go Baby Go (Tye Angland) and Frederick Engels (Zac Purton) both have claims at their best. After that there is depth and runners with some apparent upside, but all requiring personal bests over the specialist course to win here.