Tony Cruz's charge had nothing go his way last start, but he gets his chance to atone against an inferior field and looks an early banker 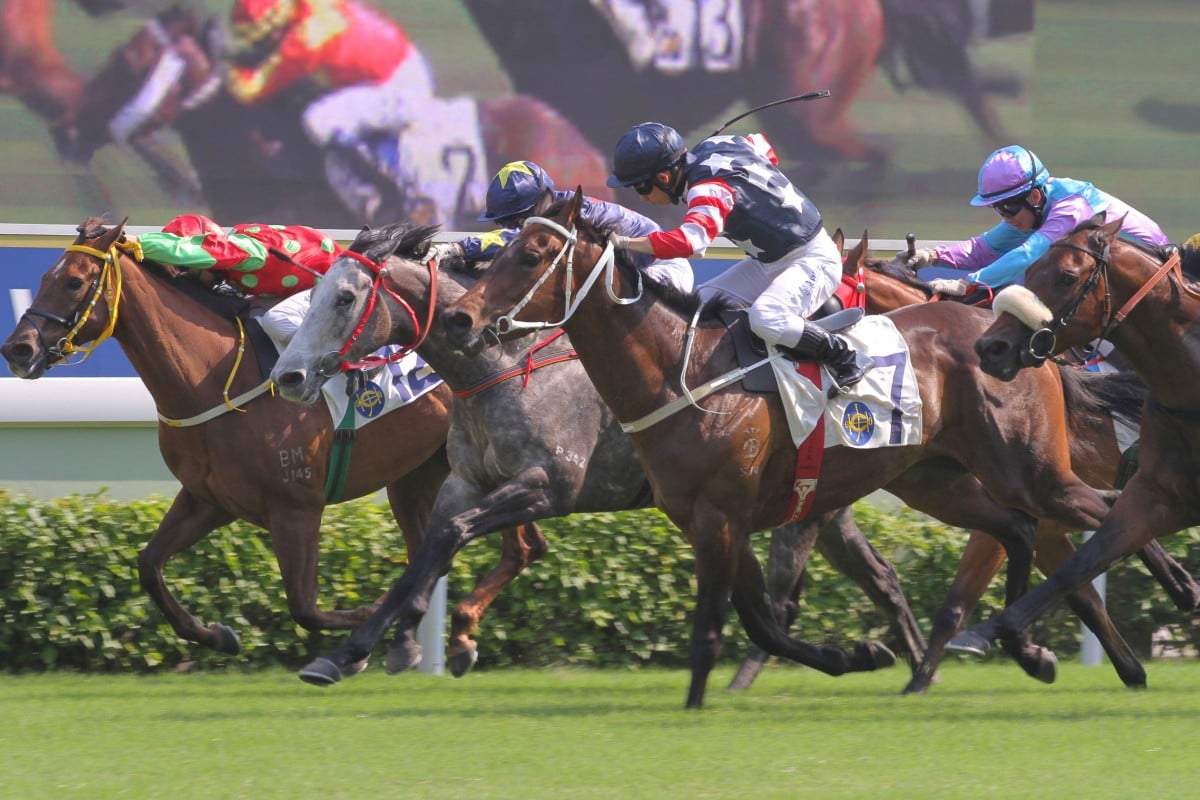 Lucky Day (outside, number seven) gets to the lead late to win at his first start. He'll be aiming to win again on Saturday.

Lucky Day didn't live up to his name last start when striking all sorts of trouble, but against a weaker field he can make amends as part of a double banker strategy in the opening leg of the Triple Trio at Sha Tin on Saturday.

After a solid debut win, Lucky Day went around 3.3 favourite two weeks ago and Matthew Chadwick seemed to have his mount positioned perfectly in the run.

Unfortunately, when it came time to make a race-winning move, the gaps didn't come and all-the-way leader Gorgeous Debut skipped away with the contest.

Lucky Day did enough once clear to suggest he would have gone close if the breaks had gone his way, and today he comes back to the same course and distance of 1,200m against a below average Class Four field with Chadwick determined to make amends.

He has drawn seven in a race containing a couple that should go forward from wide gates and create at least some tempo in Hinyuen Paladin and Dragon Keeper.

Lucky Day should be superior to these, but Demon Demon (Zac Purton) represents the biggest threat in a race that falls away quickly after the top two or three.

Demon Demon was a fair fourth after travelling three-deep with cover when first-up last start at Happy Valley, and he drops into a perfect draw from gate two.

Faring worse at the draw was Brave Brother - he will jump from 14 and trainer John Size has enlisted the services of Olivier Doleuze.

Brave Brother is yet to win, but seems to have the necessary ability to climb out of Class Four and should be included.

After that it is slim pickings - Ricky Yiu Poon-fai's Graceful Kingdom might be better second-up and goes in, and consider Tayside (Joao Moreira) second-up and up to a more suitable trip.

The middle leg is an 1,800m Class Four with a 35 rating bottom, and Caspar Fownes-trained Mobile King (Jacky Tong Chi-kit) benefits from a return to the turf and goes in as banker.

Hey Cheers (Purton) can benefit from the quick back up out of Class Five and is gunning for three straight, take him while in form, whilst the David Ferraris-trained Activism (Karis Teetan) is racing well.

David Hall's bottom weight Bamboo Dance (Chadwick) has been disappointing in Class Five but may just need the extra ground and doesn't face anything special here.

The final leg, a Class Four over 1,400m, is the toughest to sort out, not least of all because it is crying out for a leader. Maybe Umberto Rispoli can get Super Caga to the front and dictate terms.

Richard Gibson's nine-year-old won four races for the trainer in his rookie season, all over this course and distance, and returns to Class Four for the first time since after struggling up in grade.