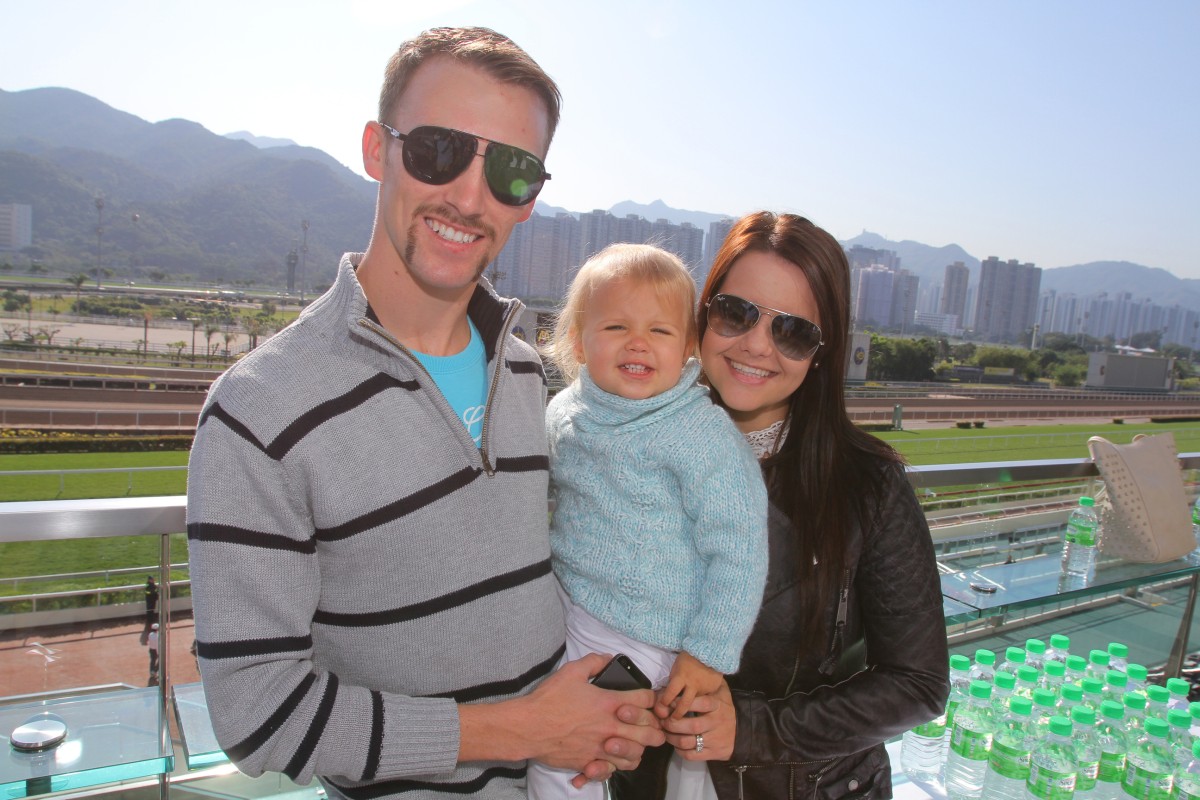 Tye Angland with his family - and moustache - at trackwork in Sha Tin. Photo: Kenneth Chan

Charity was the reason Tye Angland grew an impressive handlebar moustache through a highly successful "Movember", but Chinese-style superstition has ensured it will stay for the second Sunday in December and an international day that could deliver the Australian a much-deserved maiden Group One.

Angland rides Go Baby Go (Sprint), Real Specialist (Mile) and Endowing (Cup) and the painstakingly manscaped mo has remained unshaved, despite protestations from his wife Erin, after a November that delivered 10 victories and elevated the 24-year-old to equal third in the jockeys' championship.

"It all comes back to the Chinese philosophy - if you've got something new, and it is lucky, you've got to keep it. So it is staying until the internationals," Angland said.

"This is the best start of the season I've had and that was the best month I've ever had. I have three good chances. If they draw a barrier, they are going to run a race, it's as simple as that."

There's no doubt 1,000 metres has been Go Baby Go's best trip until now - all seven of his wins have been up the straight - but bad barriers have certainly been part of Go Baby Go's downfall when stepping up to 1,200m. Dennis Yip Chor-hong's six-year-old has drawn gates seven, nine and eight at his last three over the trip and has been far from disgraced, finishing no worse than fourth.

"Last time he stepped out over 1,200m, Leading City made me work hard to cross and drove me mad in front, plus the track bias that day meant the inside was no good. Then he won over 1,000m, beating Charles The Great and Frederick Engels easily. It is good form and with a bit more luck he will be in it."

A bruised heel after that win in the Group Three Sha Tin Trophy meant Go Baby Go was rested and missed the Group Two Jockey Club Sprint, but Angland believes that might work in his favour.

"He comes in fit and fresh. His trial was good and he has run very well first-up before," he said.

John Size has worked his magic with Endowing to win back-to-back Group races, albeit with the help of gate one both times, and the master trainer has pulled the ace from his sleeve with the blinkers applied to Real Specialist. "Endowing just keeps stepping up and he has to step up again, because this is a harder field, and I think blinkers will wake Real Specialist up a bit," Angland said.