Danny Shum Chap-shing is dreaming of another Derby for popular owner-breeder Dr Gene Tsoi Wai-wang after Mr Gnocchi bounced back to his best. 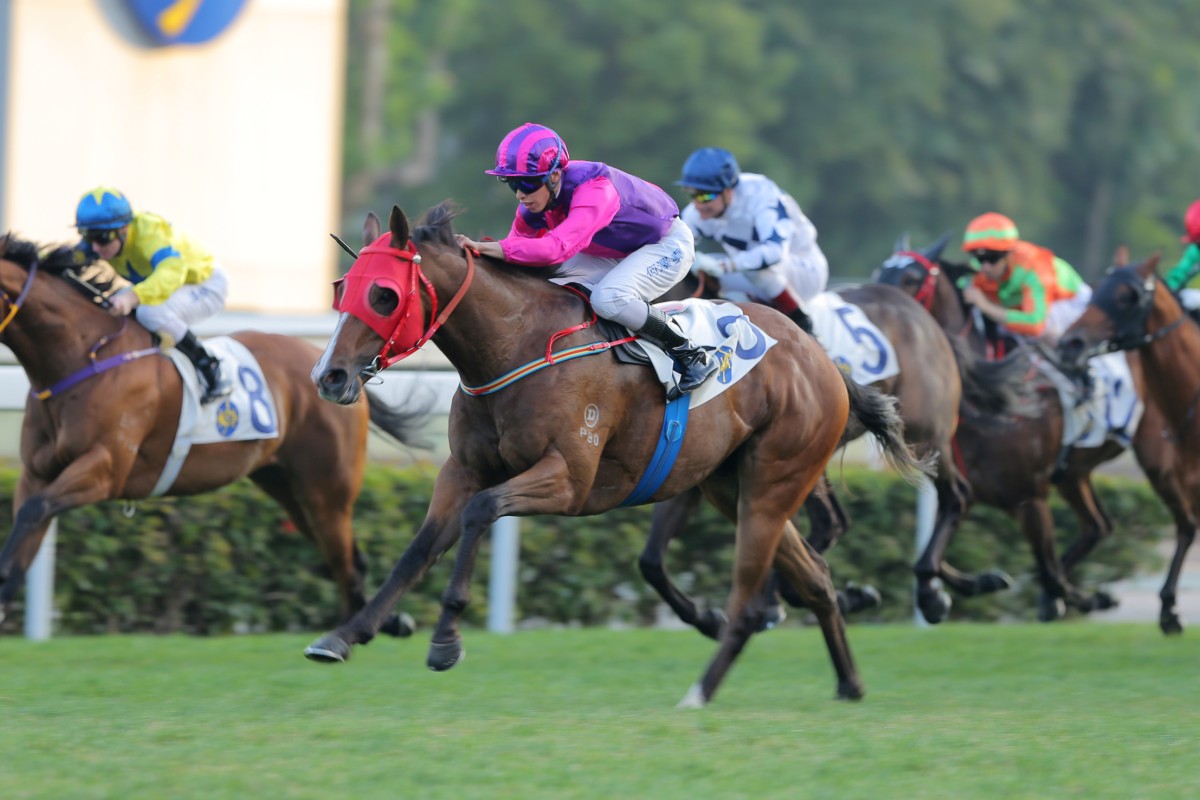 Mr Gnocchi comes with a stirring run out wide to win at Sha Tin on Saturday. Photo: Kenneth Chan

Danny Shum Chap-shing is dreaming of another Derby for popular owner-breeder Dr Gene Tsoi Wai-wang after Mr Gnocchi bounced back to his best in the Wang Chau Handicap after a disappointing last-start failure as favourite.

Mr Gnocchi has now won four from 10 - all over 1,400m - and will have a rating in the mid to high 80s after beating Big Four by 1-1/2 lengths, with Precision King another half-length away in third.

Shum said he would now aim to qualify for the Group One BMW Hong Kong Derby on March 16 with the Australian bred son of Hard Spun, which would give Tsoi the chance at a second win in the race after Elegant Fashion's famous 2003 triumph.

"He is a nice horse, he can win again in Class Two, and I have some hope for the Derby - if we can win one more I think the committee will put him in the race," Shum said.

In what was a spirited betting contest, the winner seemed one of the few major chances that didn't firm late, and his price drifted to a starting quote of $85, punters perhaps going cold on him after his flat last-start display.

Mr Gnocchi had won three of his last five heading into his last start, but was beaten nearly 10 lengths into 12th as 3.1 favourite, with jockey Keith Yeung Ming-lun blaming a rain-affected surface. Vincent Ho Chak-yiu replaced the injured Yeung and said that despite Mr Gnocchi still being "a baby", and "scared of everything" there was a lot to like about the win, particularly from a Derby-distance perspective.

"He will get more ground," Ho said. "I was chasing him all the way, at the top of the straight I didn't think he could win and I was still riding him really hard just to keep up. After that though, the others were getting tired, and he was still fighting on. He will be better as he steps up to 1,600m and 1,800m."

The win broke a long losing sequence for Ho, who hadn't won since December 1, but he paid a price for his desperation with a three-day careless riding ban for shunting clear with 150m to go.

Shum had a double, with Joao Moreira helping turn things around on the previously winless Class Five galloper Hello Kimberley, which wore blinkers for the first time. After jumping beautifully from gate 12, Hello Kimberley sat outside leader and favourite O'Halo before bounding away to win by 3-1/4 lengths.

"It definitely wasn't a plan to be where I was," Moreira said. "I was told to be fourth, fifth or sixth, but I'd drawn outside and the horse just jumped so quick - so I thought I would use it and go forward. He really responded when I went for him."