John Size's promising stayer has likely missed his chance to run in the four-year-old classic, but he is a banker prospect as he steps up to 2,000m 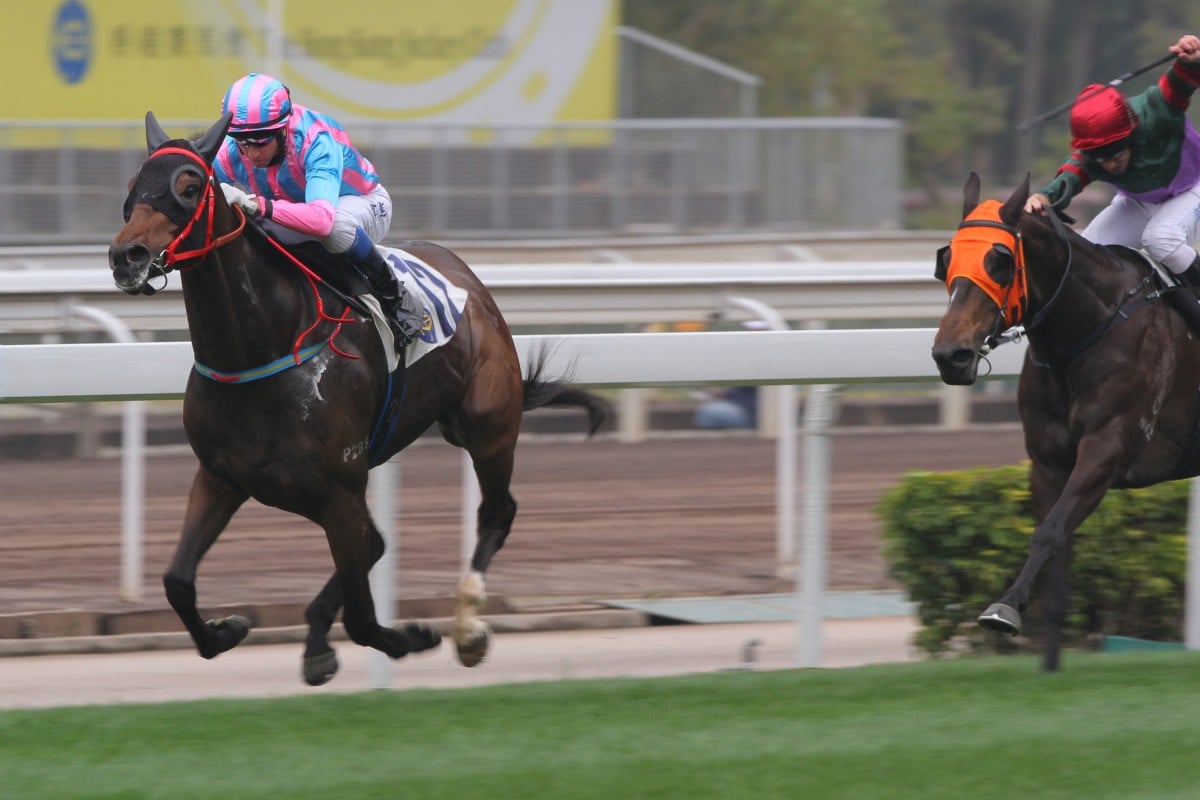 Khaya (Douglas Whyte) was impressive last Sunday and can repeat in the final leg of the Triple Trio. Photo: Kenneth Chan

A group of longshot Derby hopefuls line up in a Class Three handicap on Sunday at Sha Tin, all needing a win to keep their slim chances of competing in the four-year-old classic alive, and John Size-trained Khaya stands out from the rest as far as quality is concerned.

The Citibank Business Handicap (2,000m) also forms the final leg of the Triple Trio and with a decent draw and on a seven-day backup after an impressive win he looks a viable banker.

Khaya (Douglas Whyte) is still only rated 75 and it would probably take at least two wins, and impressive ones at that, to challenge for a spot in the $16 million Group One Hong Kong Derby (2,000m) on March 16.

After a slow but consistent start to his career last season as a three-year-old, a more mature Khaya is now on a charge through the grades. A step up to a mile and beyond has brought out the best from the son of Librettist, and he has won three straight. On each of those occasions he hasn't had things his own way - last week it was being first-up for three months over a mile, as well as a wide gate that loomed as obstacles. Size has demonstrated that such a break doesn't really matter so much, and Khaya did the rest from the draw, getting across easily to lead and dictate - but what about second-up, stepping up in distance, on a week-long break?

Khaya could suffer a drop off, and while Size takes care of his horses and nurses them through the system like no other, surely this horse wouldn't be racing if not for the allure of the "once in a lifetime race" on the horizon? That's the only real question mark - whether the horse can produce the same sort of run again on Sunday. It is simply another case of "in Size we trust."

Richard Gibson's Wayfoong Express (Tye Angland) is another whose owners are dreaming of Derby riches. He comes in off a more orthodox one month between runs, and also steps up from a mile, having broken through two starts back before running third in what looks a decent form race. He should enjoy the 1,800m and continue to progress nicely - it's just that he might have found one better.

The others look even more out-matched - another four-year-old, John Moore's Let Me Go (Tommy Berry), won't be joining his gang of stablemates in the Derby but could bounce back into form and run a place. Malayan Pearl (Mirco Demuro) is a smoky - he is rock-hard fit from racing, drawn one and has a light weight - and Better Announce (Karis Teetan) could also make a pest of himself with 113 pounds.

In the opening leg, a Class Four over 1,200m, another Size-trained galloper returns from a short break, well grounded and ready to improve on his debut outing.

Grand Plus (Joao Moreira) was disappointing on face value first-up in November - he raced greenly and then after being given the run of the race, he did nothing in the finish. But a scope revealed blood and mucus - he has been back to the trials twice and looks ready to run a race.

The last trial was a 1,200m all-weather track test when he was sluggish to begin, but he settled nicely behind runners and then motored home under his own steam. He is the best banker in what is a competitive race full of untapped talent.

Second-starter Hit The Bid (Teetan) also goes in - he was hindered by a bad draw up the straight on debut, and last start was half a length away from Great Pegasus when stepping up to 1,200m, albeit after box seating from gate one. He will find it more challenging from gate 12 against a relatively strong Class Four field, but is a horse with enough upside to be winning races in this grade and beyond. Also include Real Fit (Vincent Ho Chak-yiu), Kynam (Berry) and Gorgeous Debut (Whyte).

In the middle pin, a Class Three over 1,200m, Pretty One (Brett Prebble) has been beaten by big weights and barriers at his last two starts, and back to the same course and distance he gets gate one this time against average looking opposition.

Pretty One is banker, but don't rule out Benno Yung Tin-pang's Precision King (Zac Purton) - he has won two of his last three and again looms as a big hope after drawing gate five. Brave Brother (Moreira) and Affluence of Rain (Neil Callan) are other chances.