While most eyes were on the first trial at Sha Tin on Tuesday, which featured a highly credentialled John Moore quartet, the session looked an important guide to what can be expected in the final few weeks of the season. 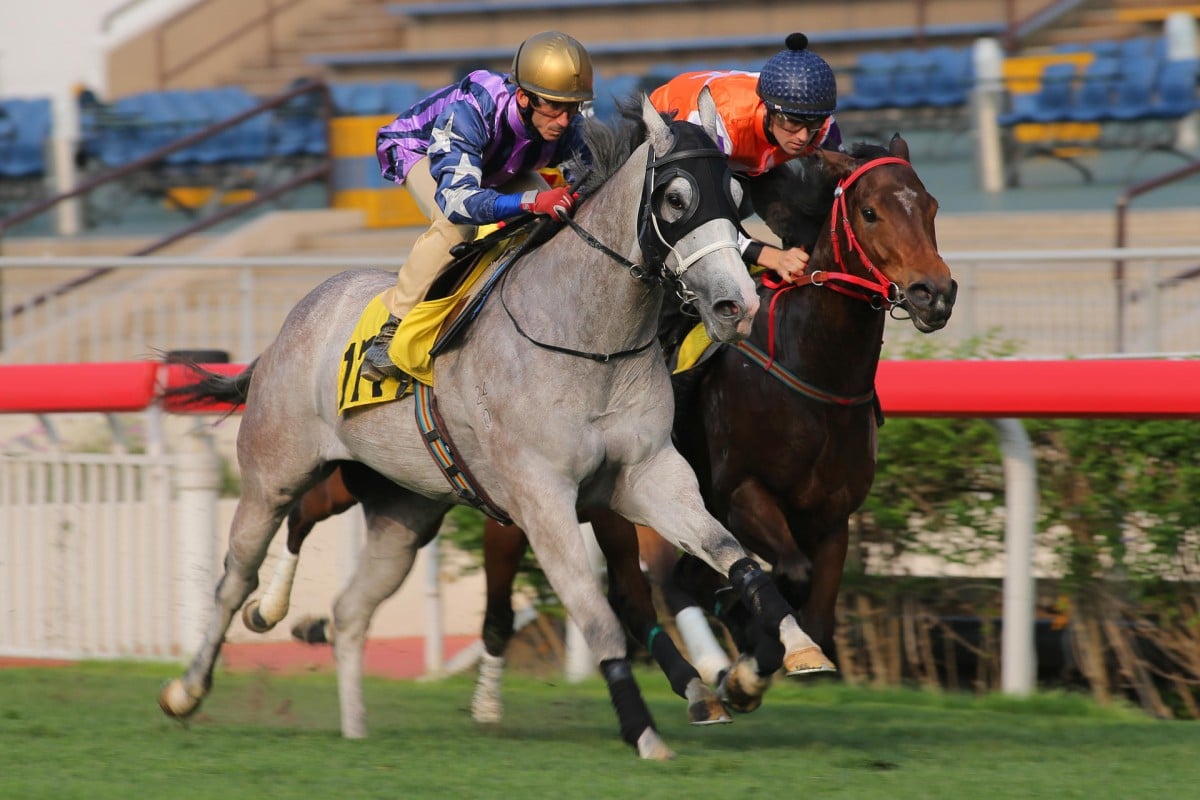 The grey Incredible Fellow (Olivier Doleuze) holds off Harbour Punk (Tye Angland) on Tuesday. Harbour Punk was under a hold and looks one to follow. Photos: Kenneth Chan

While most eyes were on the first trial at Sha Tin on Tuesday, which featured a highly credentialled John Moore quartet, the session looked an important guide to what can be expected in the final few weeks of the season.

Designs On Rome, bound for Sunday's Audemars Piguet QE II Cup, Champions Mile contenders Dan Excel and Flagship Shine and Sprint Cup hopeful Charles The Great captured most attention, and as reported on Wednesday, all look on track for their respective targets.

However, with a number of unraced horses continuing to build up towards late-season targets, it was definitely a critical session to take notes.

John Size's Eye On You is already creating discussion among punters, despite the fact he is yet to be seen on raceday in Hong Kong.

He was set to start favourite in a Class Three over 1,200m on April 6, but was withdrawn on race morning with a mild bout of colic.

He was the slowest of the three 1,000m turf heats, but Joao Moreira didn't ask him for an effort and he did all that was required - he showed that he was fit and healthy once again.

Eye On You was unbeaten from three starts in Melbourne and Brisbane in Australia, and from everything he has shown since his arrival in Hong Kong, it won't be long before he salutes in Larry Yung Chi-kin's familiar violet and gold colours.

The effort of Derek Cruz's Harbour Punk in the fourth trial, an 800m scamper, was enough to suggest he can make an impact when he steps out for the first time.

Harbour Punk, bred in Australia but a veteran of two New Zealand starts, was best into stride and, under a hold from Tye Angland, remained among the leading bunch the whole way.

He finished a short-head behind another Australian-bred galloper, Richard Gibson's unraced Incredible Fellow, but Oliver Doleuze had to urge him along to finish on terms.

The last trial of the day, over 1,050m on the all-weather track, saw Cartoon Fay Fay race away under heavy riding from Karis Teetan, but it was Paul O'Sullivan's Aerovelocity - with 40 ratings points up his sleeve from the trial winner - who caught the eye.

Tuesday's hit-out ensured he is kept up to the mark for when he steps out next, and it was a nice effort under a hold despite finishing four lengths behind the 64-rater.