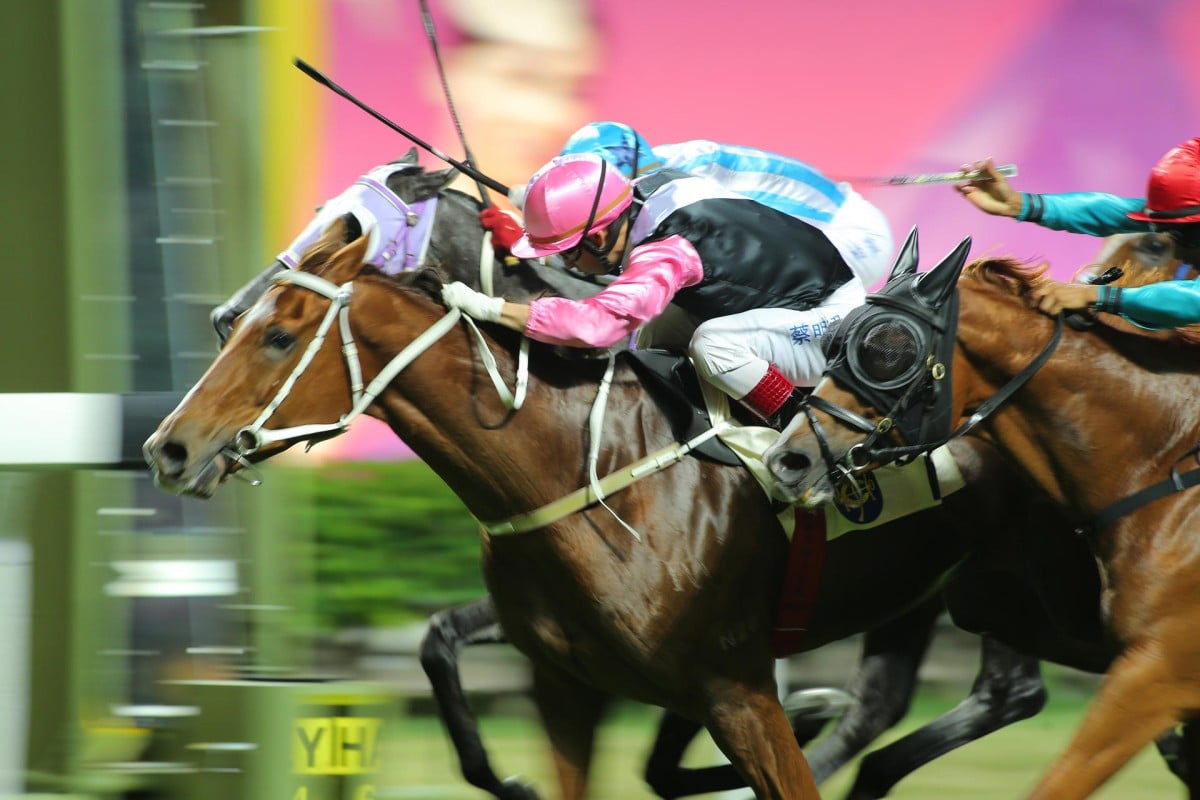 Matthew Chadwick guides Beauty King to the line in race six at Happy Valley, which was his third win of the night. Photo: Kenneth Chan 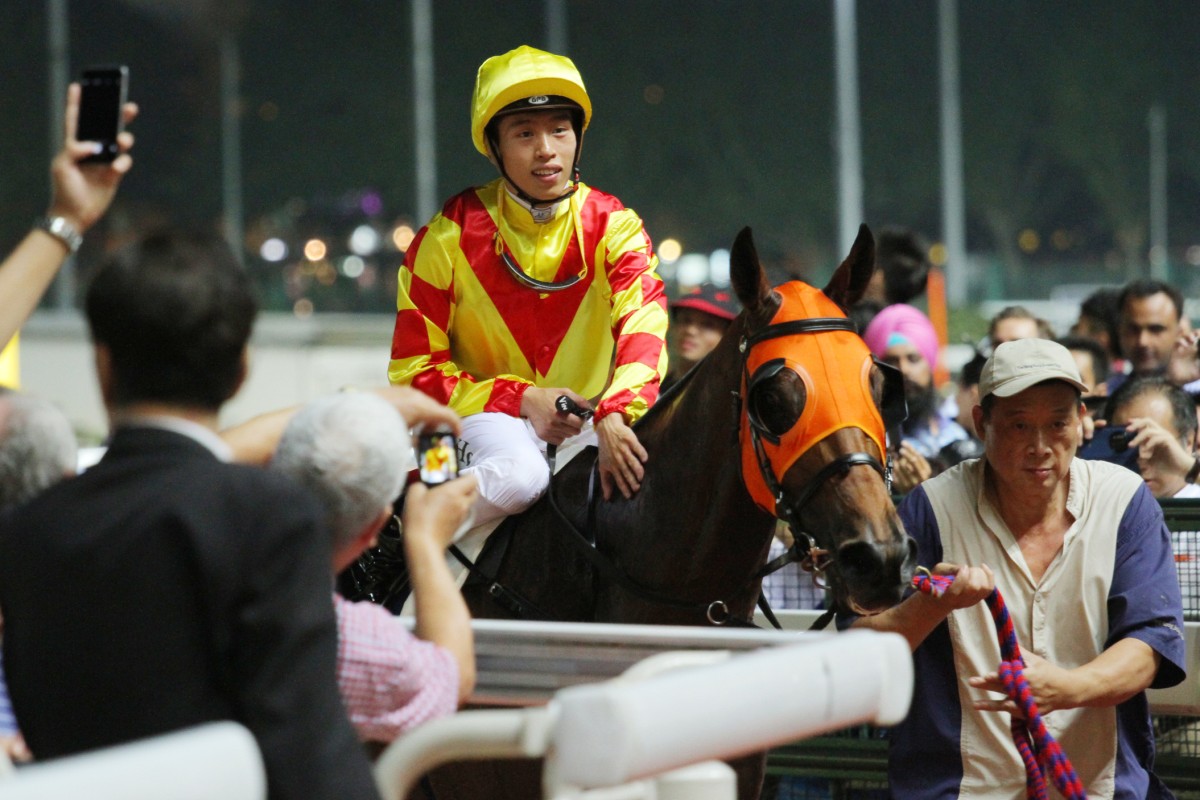 Vincent Ho Chak-yiu earns his 13th win of the season aboard Namjong Blossoms in race two, but he received a three-day ban for careless riding in the last race. Photo: Kenneth Chan 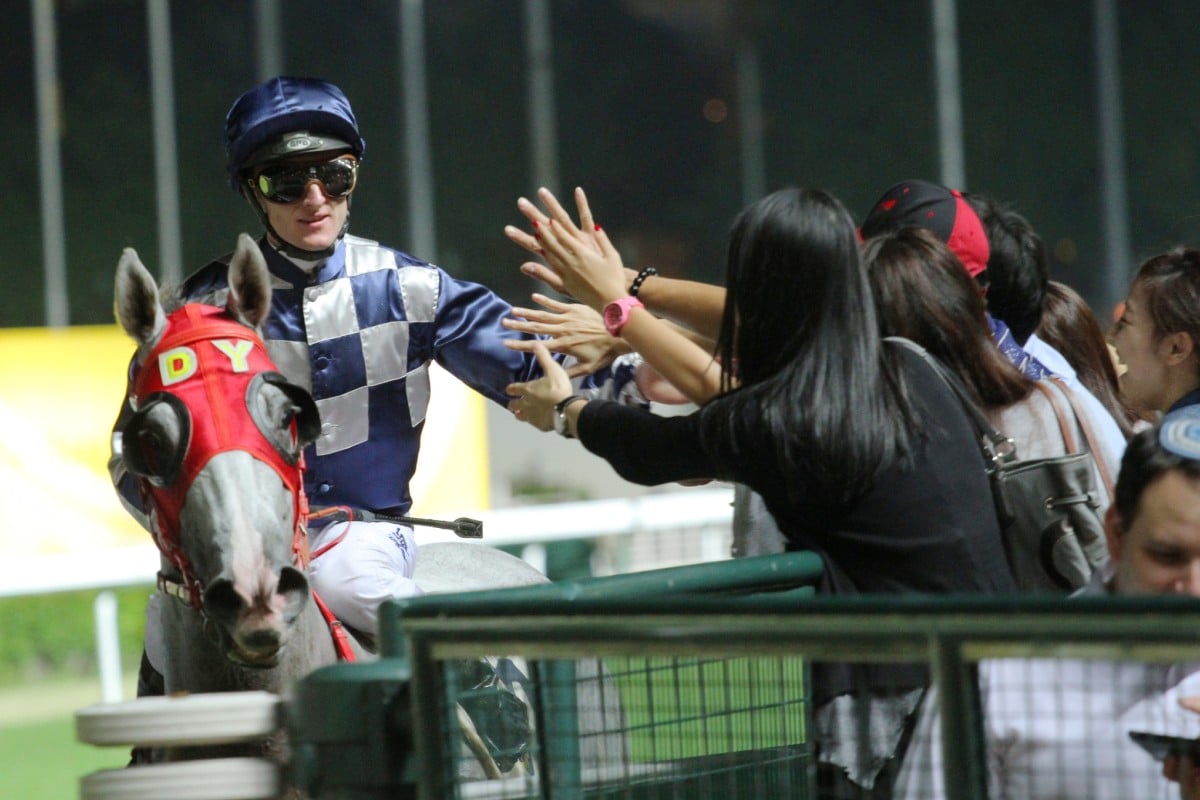 Jockey Matthew Chadwick looked more relieved than overjoyed after he dominated last night's Happy Valley card with a treble, admitting that he could not have chosen a better meeting to find form.

His third winner, Let's Goal for Cruz, was the only horse to come from the tail of the field, with Chadwick hugging the rail and not coming around a runner.

I came to the races thinking I had decent chances, but a lot of them had drawn badly, so I couldn't be too confident
Matthew Chadwick

"I just needed a day like today to get some confidence, especially with three new riders about to arrive," Chadwick said, referring to the imminent introduction of Mirco Demuro, Umberto Rispoli and Andrea Atzeni to the jockeys' ranks.

"I don't think I have been riding too badly. There's just been a lot of hard luck stories all the time," he said. "I've had plenty of placings, enough seconds. Tony's stable has been quiet too, and, obviously, he is my main supporter. 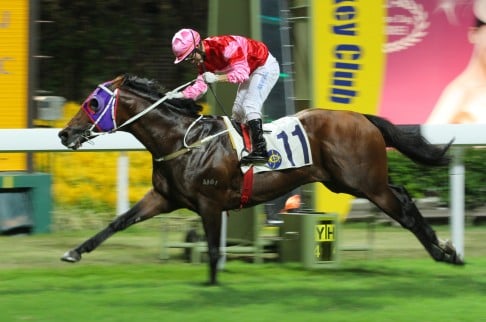 "I came to the races thinking I had decent chances, but a lot of them had drawn badly, so I couldn't be too confident.

"Jolly Posh drew wide, but he had enough pace to cross. We were lucky because no one took us on. He didn't have too much weight and he was just left alone.

"Beauty King also had a pretty easy run. By then, it was looking pretty clear that the track was playing leaderish and yet they walked in the race. If they went the standard time, I think I would have lost by two lengths easily."

Cruz was critical of the track, despite Let's Goal being one of only two horses to win from outside the top two all night.

"This is a track that is very biased," he said. "If you are caught wide you have no hope, if you get back you are struggling. 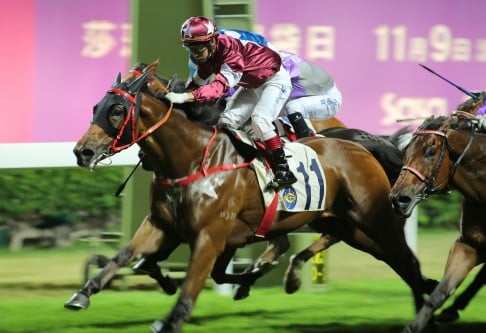 "I thought Beauty King was a good chance, but Let's Goal, it was hard to be confident at all from the draw, as we didn't have too many options. We were lucky that they all pushed off the fence and he was able to get the run."

Trainer Me Tsui Yu-sak also had a treble with Kim Glory (Ben So Tik-hung), Namjong Blossoms (Vincent Ho Chak-yiu) and Oriental Prosper (Joao Moreira), with all leading throughout, moving him second on the trainers' championship on 11 wins.

"I was lucky that all my horses drew well," Tsui said. "It allowed us to go forward and we were able to make our own luck."

The night's feature, the Ireland Trophy, went to Dennis Yip Chor-hong's Choice Treasure (Zac Purton), who came from midfield to break through for his second win at his 26th start. 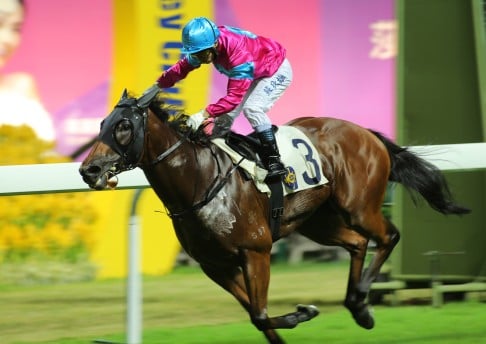 "The horse is very honest, but a draw is everything here at the moment," Purton said.

"Everything possible that could fall into place did so tonight and he was able to win his race. It was nice to see him win because he does try hard, which keeps him up in the ratings despite the fact he doesn't win often."

Ho continued his terrific run of form with his 13th win of the season on Namjong Blossoms, but a careless riding ban incurred on Happy Journey in the last race threatens to halt his momentum.

Jacky Tong Chi-kit was also suspended for careless riding in the same race aboard Mr Ginger, while Christian Reith faced the wrath of stewards earlier in the night aboard Spirit Soaring, all receiving three-day bans.