Dubai an option for David Hall's sprinter, but straight Group One may be first port of call Another impressive victory by Master Kochanwong has left David Hall with the classic conundrum of what to do with a dirt specialist once his rating hits triple figures, with the astute trainer now wrestling with possible next-start options for his in-form sprinter.

For the third time in his short career Master Kochanwong fought it out with Access Years, but came away on top for the first time after a titanic struggle up the straight.

The five-year-old has now won four from 11, all of his triumphs coming on the all-weather track, where he has not missed a place in eight tries.

Now in Class One and with no dirt options on his favoured surface in the foreseeable future domestically, Hall is left to ponder possible options including a trip to Dubai, which he indicated was unlikely, or throwing the son of Commands into the deep end of a Group One sprint up the straight later this month.

"It is very difficult to place a horse like him now - clearly the dirt is his forte and we have seen this scenario plenty of times before with these types of horses," Hall said.

"When they get to this stage, on that track, there's just not that many options for them here." 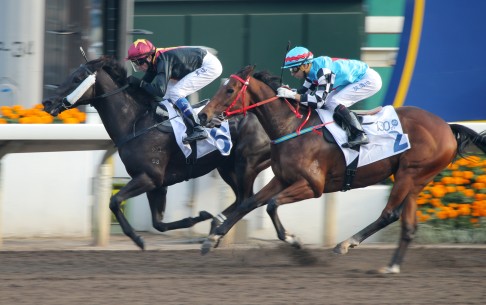 Even though the main track at Dubai's Meydan racecourse has returned to a traditional dirt surface for this year's Dubai World Cup carnival, Hall seemed reticent to commit to an overseas campaign with a horse that would still require another ratings-boosting win to qualify for a race like the US$2 million Golden Shaheen in late March.

"Is he a Dubai class horse? It is hard to know," Hall said. "That's as good as he has ever gone there today. But to give him credit, he does keep answering the call every time we put a new challenge to him.

"It's a tough one on what to do next, but maybe there won't be many horses in the straight race coming up."

Hall was referring to the HK$6.6 million Kent & Curwen Centenary Sprint Cup in two weeks over the straight 1,000m course where the horse has run some "handy trials", according to Hall.

"Although clearly the dirt is where he would prefer to be, we have to try something else," Hall said. "To be honest we are just happy that he has managed to get to the level he has got to and we will just enjoy the win and then weigh it all up."