Straight-shooter Bundle Of Joy 'has to lift' on favourite course Bundle Of Joy has strong form over the course and distance, top jockey Joao Moreira on his back and raw straight-line speed, but trainer David Hall still believes his sprinter will have to find another level to win Sunday's HK$6.6 million Kent & Curwen Centenary Sprint Cup.

Bundle Of Joy spent much of the past two seasons stationed in Class Three, but broke out in a serious way with back-to-back wins up the tricky Sha Tin straight course earlier this term, capped by a convincing Group Three victory with a light weight against the horse Hall says is the one to beat: Peniaphobia.

But since then Bundle Of Joy has failed twice at Group Two level over 1,200m, the second time on a rock-hard track when Peniaphobia turned the tables and won the sprint trial on his way to finishing runner-up on international day.

My horse probably hasn't proven himself at the set weights scenario yet. He has done it off the handicap and this is a much tougher race
Trainer David Hall on Bundle Of Joy

Even though Hall's horse was in receipt of just one pound from Peniaphobia when he beat him in the National Day Cup, the Australian trainer claimed the level weight conditions of Sunday's Group One make it tougher for his more exposed five-year-old.

"My horse probably hasn't proven himself at the set weights scenario yet. He has done it off the handicap and this is a much tougher race," Hall said.

"Peniaphobia is the one we fear the most. He has shown himself to be a more progressive horse and maybe he had more room for improvement since we last met, compared to Bundle Of Joy, who is a more seasoned horse.

"My horse wasn't disgraced in those two runs around a bend, and he was probably feeling the ground on those occasions. Obviously, his 1,000m form is a lot stronger and down the straight he will be better." 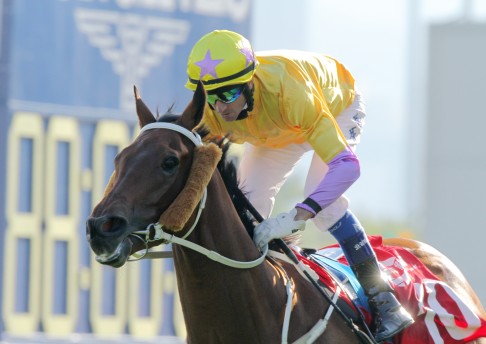 Hall, who won this race with Absolute Champion in 2008, is also taking some heart from the slick times his sprinter has been able to run up the straight.

Bundle Of Joy's time in the National Day Cup of 55.38 seconds was quicker than all but one of 21 Centenary Sprint Cup editions since it was switched to the 1,000m course in 1994. Only champion sprinter Sacred Kingdom went faster by 1/100th of a second in the first of his back-to-back wins in 2010 and 2011.

"If he can step out and produce a similar sort of time, then he can be competitive," Hall said.

Moreira is forced to make decisions between multiple horses at every meeting and although he says this one was made for him because of the uncertainty surrounding last year's winner Amber Sky, who will now be ridden by Umberto Rispoli, the Brazilian is comfortable with his choice.

"It wasn't a tough decision because until this week they didn't know whether Amber Sky would race or not," Moreira said. "I know Amber Sky has been successful with me riding, but the horse I have jumped on has a great chance."