Military Attack will race in blinkers next time he steps out after a dirt trial in the headgear at Sha Tin on Friday although trainer Caspar Fownes is yet to settle on a return date for the former horse of the year. 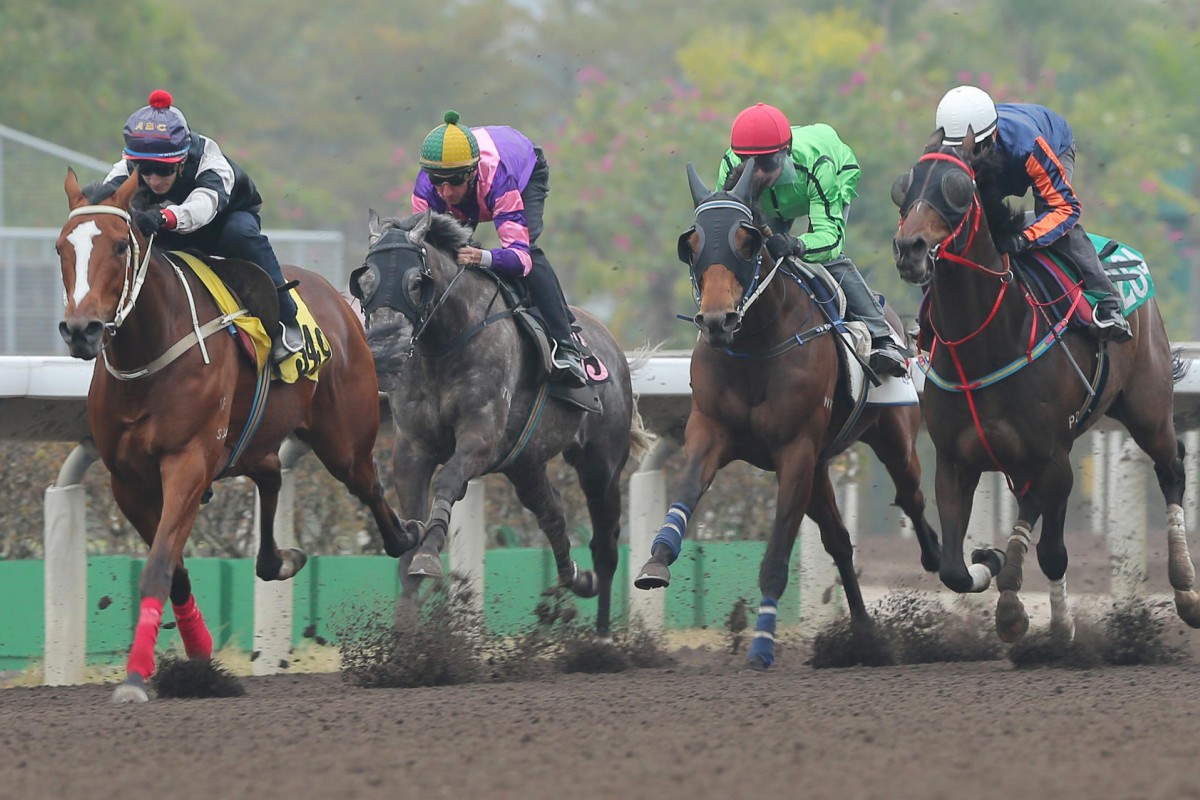 Military Attack (Zac Purton, second from right) trials in blinkers on the dirt at Sha Tin on Friday as he gears up for Group One targets at home and abroad. Photos: Kenneth Chan

Military Attack will race in blinkers next time he steps out after a dirt trial in the headgear at Sha Tin on Friday although trainer Caspar Fownes is yet to settle on a return date for the former horse of the year.

After avoiding a clash with Able Friend in the Stewards' Cup, Military Attack is likely to return in either next weekend's Group Three Centenary Vase over 1,800m, although Fownes hasn't ruled out heading straight to the Group One Citibank Hong Kong Gold Cup (2,000m) next.

Whichever race the seven-year-old resumes in, he will be equipped with blinkers after a quiet 1,200m trial on the all-weather track where he moved well between horses after settling near the rear early.

Both Fownes and jockey Zac Purton, who rode Military Attack in the trial, indicated blinkers may squeeze a little more out of the 27-start veteran after a couple of narrow defeats, first in the Jockey Club Cup behind Blazing Speed and then on international day behind Designs On Rome.

Military Attack had already worn blinkers in a back straight turf gallop 11 days prior to the trial and his steady workout confirmed the switch would be made.

Even though the trial wasn't overly taxing, and didn't need to be, Purton was satisfied with the effort.

"I thought it was a nice trial," he said. "He was sharp out of the gates and he travelled nicely through the trial. Obviously 1,200m is short for him but he worked to the line nicely."

Fownes reiterated that fitness wasn't the point of the trial after three tough runs already this term.

"He showed some zest and was good out of the boxes," he said. "Whichever way we go, it doesn't matter because he is such a clean-winded horse. The Gold Cup will tell us which race we go for in Dubai, either the 1,800m of the Dubai Turf or the 2,400m Sheema Classic."

Military Attack finished fourth in the heat, two lengths behind Danny Shum Chap-shing-trained sprinter Fionn's Treasure (Dicky Lui Cheuk-yin), who showed some signs of life in his return from an early season setback and subsequent lay-off. Fionn's Treasure, who has battled lameness issues in his left front leg previously, was diagnosed with a sesamoid stress fracture in the same troublesome limb in early November and missed two months of work.

Fionn's Treasure hit a peak rating of 95 early last season but has since dropped into Class Three and Shum may be tempted to try the six-year-old in a 1,200m race on the all-weather track six days from now if he feels the one-time rising star's fitness is up to the mark.

Another horse wearing blinkers for the first time in the trial was David Hall's Irish import System Overload, who also had a new jockey aboard as Nash Rawiller took the reins.

Rawiller had already ridden the 74-rated four-year-old in a recent track gallop and didn't tax the grey as he moved well through the line after settling back in the field.

System Overload was a touch disappointing last start over 1,800m, even considering the fact he received a slight check before turning and his momentum was halted.

Friday's trial effort gave an indication that he could produce something next start after the promise he showed first-up.