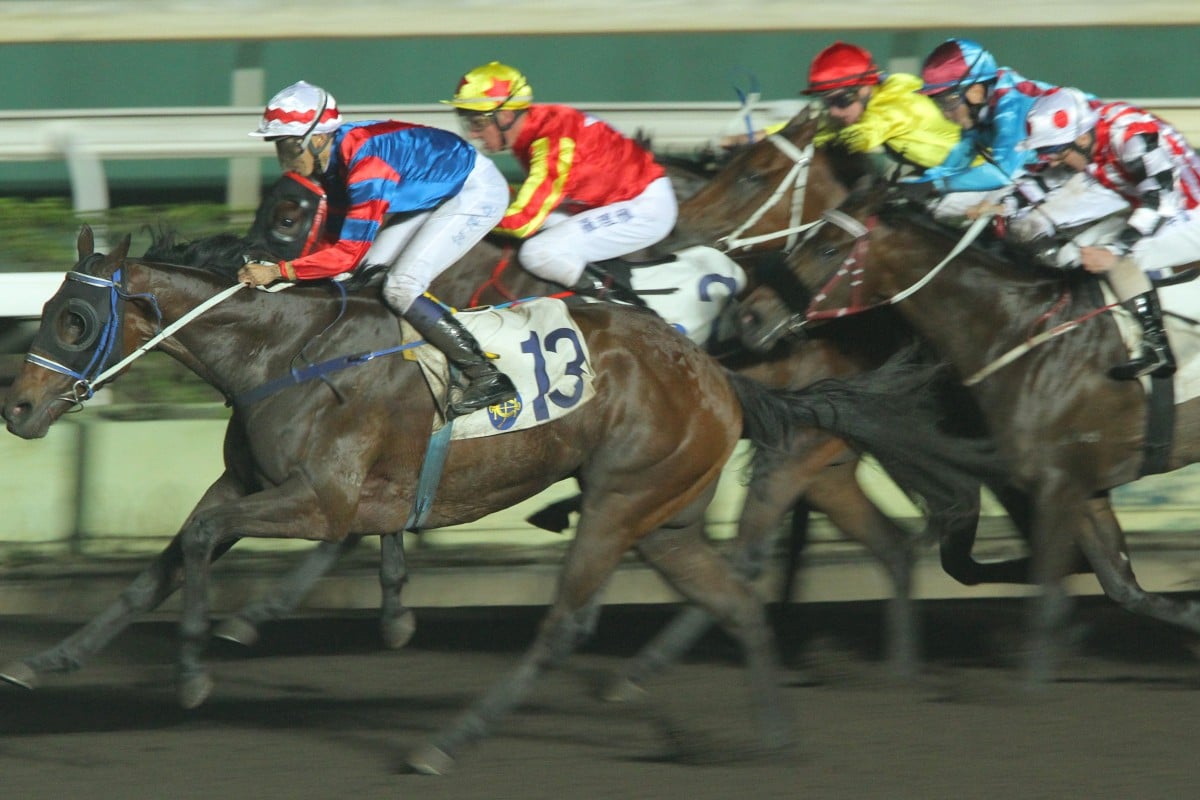 Gun Pit races away from Hypersonic in a Class Two race on the dirt in October. They clash again here. Photo: Kenneth Chan

A first-leg lottery in tomorrow night's Triple Trio makes it a tough nut to crack, but playing a double banker of dirt track specialists Gun Pit and Hypersonic in the second leg will narrow things down on a difficult night at Sha Tin.

Gun Pit and Hypersonic stand out at the top of the weights in a Class Two 1,650m contest containing just nine runners and fewer selections there can save for more in the two difficult races.

Gun Pit (Zac Purton) returns to a surface where he has produced four of his five career wins, including two electrifying displays over the course and distance this season that pushed the four-year-old's rating to the brink of triple figures.

In fact, even though the rating of 99 was achieved on dirt, it was enough to lure owners into running Gun Pit in two of the three races in the four-year-old series - the Hong Kong Classic Mile and Hong Kong Derby, with a run over 1,800m on the turf in between - where the son of Dubawi finished unplaced each time.

With those turf obligations out of the way, trainer Caspar Fownes can now happily bring Gun Pit back to the dirt, where he is so talented that his handler considered a Dubai World Cup carnival campaign this year rather than attack the age-group classics.

Purton has been aboard the gelding for three of his wins, and Gun Pit's best here should be enough, although John Size-trained Hypersonic (Brett Prebble) is a hardened campaigner that will give plenty of stick in receipt of three pounds from his younger rival.

Early this season, but only two starts back, Hypersonic was beaten less than two lengths into second by Gun Pit when giving 16 pounds to the winner.

Gun Pit was dominant, running a last 400m more than a second faster than anything else in the race as he rattled home from second last, but he was helped by some pressure up front and Hypersonic was left a sitting shot after having to push his way clear.

After that Hypersonic was a half-length fourth and hitting the line hard behind some speedy customers over what is now looking a less suitable 1,200m on the dirt for the five-year-old.

Hypersonic was given more than a month off before returning with two 1,200m barrier trials in preparation for this, the last of which he won in impressive enough style to suggest he will return at his best.

With such a small group of runners lining up, it is tempting to simply tick "field" outside of the top two, but the other legs look harder, so narrowing it down is imperative.

Pablosky (Joao Moreira) stands out as best of the rest, while Sichuan Vigour (Keith Yeung Ming-lun) is an intriguing runner - he has been struggling at 1,600m on the grass, but returns to the all-weather track for the first time since he was third behind Gun Pit last December, his only run on the surface. Sichuan Vigour meets Gun Pit 12 pounds better at the weights for that one and a half length defeat.

Majestic Anthem (Douglas Whyte) is the other to consider, with a low draw and the ability to sit handy helping his cause.

The first leg of the TT is a Class Four 1,200m contest that at initial glance looks as though it could easily be mistaken for a special conditions race.

One horse that has won twice this season over the course and distance and comes in off a good run is likely favourite Confucius Elite (Olivier Doleuze). As banker, though, take a punt on bottom weight Safari Magic, who should enjoy the 10-pound claim of Jack Wong Ho-nam. Of the others, take Diamond Friends (Moreira), En Civil (Whyte), Cultural City (Yeung) and Prince Of Sunshine (Alvin Ng Ka-chun).

In the final leg, take Chin Chun (Moreira) as banker as he heads to the all-weather at his second career start after some nice trials on the track before his debut. Also take Lovely Naughty (Derek Leung Ka-chun), Call Me Achiever (Wong), Hit The Bid (Purton) and The Prince (Vincent Ho Chak-yiu).