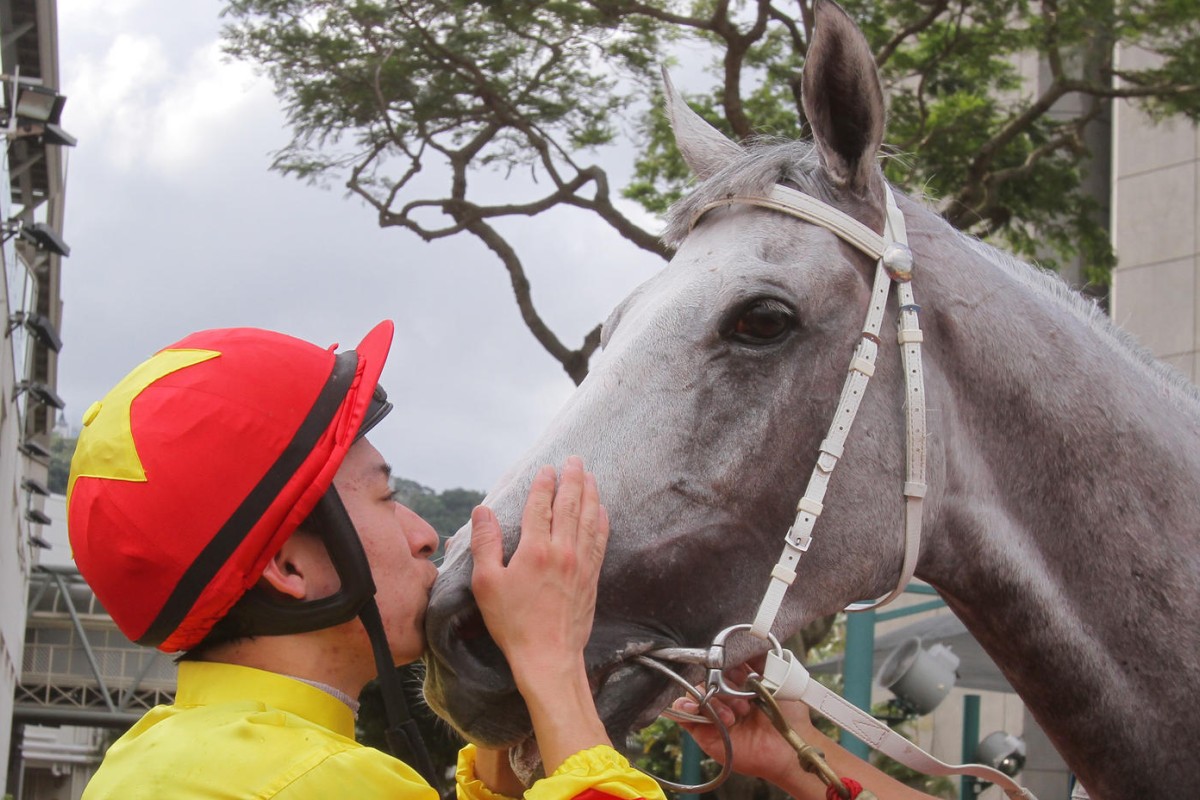 Matthew Chadwick celebrates aboard California Memory after they win the Hong Kong Cup in 2012.

There is something about a champion grey that always draws in fans and one of Hong Kong's most popular gallopers of the past decade, California Memory, will be bid farewell with a special ceremony at Sha Tin races today.

Racing here doesn't quite match the send-offs that Japan's best receive, but the rider California Memory helped to put on the map, Matthew Chadwick, said he was pleased the Jockey Club was making a special effort.

He deserves a good, long retirement, just relaxing under a tree in a paddock
Matthew Chadwick

"He's played a really big role in my career, my education as a jockey, helping me develop confidence in my ability," said Chadwick, who had his breakthrough Group One on California Memory in the 2011 Gold Cup and was his partner at 33 of 39 Hong Kong starts.

"Before California Memory, I was seen as more of a front-running rider but, because of his style, he really helped me develop and get rid of that perception. He has great character, he never gives up a fight and he was doing that right up to the last time he raced - it's just his legs couldn't take him there any more.

A four-time Group One winner, including successive Hong Kong Cups, and with more than HK$50 million in stakes, California Memory was last in the Queen Mother Memorial Cup with a second episode of heart arrhythmia at his final run.

But that isn't how he will be remembered after a long career which began with a lot of disappointment and personal pain for both horse and owner.

California Memory's Sha Tin debut in February, 2010, saw him beaten out of sight and he would not race again for eight months. When he did, and quickly got into the winner's stall in October, it was tinged with sadness - his original owner, Howard's father, Dr Thomas Liang Ting-sen, had passed away in the meantime.

It was Dr Liang who recommended California Memory be gelded and a discovery was made. The grey landed from France listed as a rig - a horse with one testicle - but it seemed a botched gelding attempt had already been made.

Trainer Tony Cruz explained: "There was no record in France of what happened to the other testicle. The vets here couldn't find it at first, but apparently it was up inside the channel. Anyway, after they operated and removed the second testicle, he lost a lot of weight and was in poor condition, which is why he had so little racing early."

Cruz always said he's the only horse he'd ever jogged for the first time only to find him sore in all four fetlocks the very first day; the joint worries would never be far away throughout his career, but he had a big engine and flair that won him fans worldwide.

Two Hong Kong Cups was a great achievement. In the end, California Memory was nine, he had done his job. His prime time has gone
Tony Cruz

Overseas, he was never at his best and controversially beaten at odds-on in Singapore when Chadwick was criticised but California Memory was also injured. He performed below his best in Dubai and a second Singapore attempt before Cruz abandoned trips away. The grey later gave Cruz the first Champions & Chater Cup win of his training career in 2013 but that was his final win.

"Two Hong Kong Cups was a great achievement," said Cruz this week. "In the end, California Memory was nine, he had done his job. His prime time has gone and he deserves his retirement. He's only small, about 15.2 hands, but he's tough.

"He's one of the very best I've trained - the combination of his courage and his turn-of-foot made him one hell of a horse."