Consistent Call Me Achiever stands out in Triple Trio opener

Me Tsui's flashy chestnut is as honest as they come, and he jumps off the page as an obvious banker as he returns to the Happy Valley 1,000m 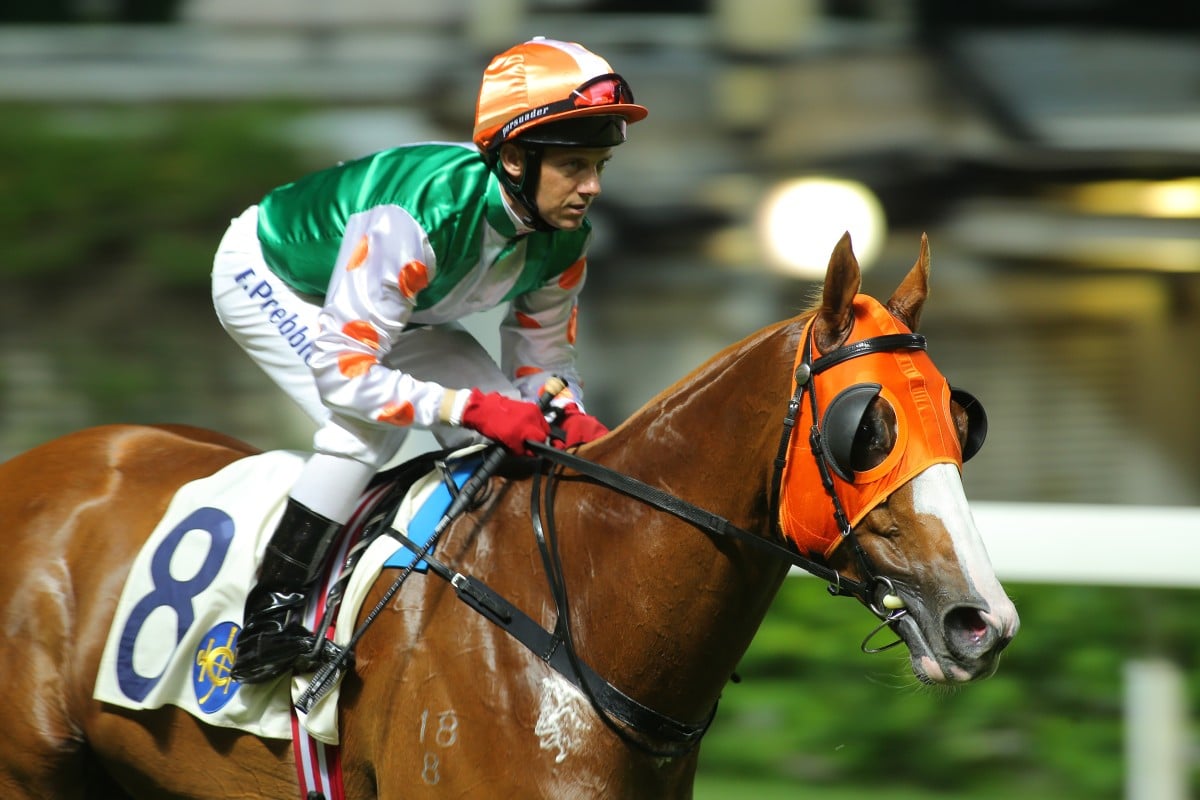 Call Me Achiever loves the Happy Valley 1,000m and gets his chance again in the first leg of the Triple Trio. Photo: Kenneth Chan

With the help of a low draw and on the back of a nice preseason barrier trial, Me Tsui Yu-sak's consistent sprinter Call Me Achiever leaps off the page as an obvious banker in the opening leg of the Triple Trio at Happy Valley tomorrow night.

Call Me Achiever's bread and butter is the Valley's 1,000m scamper, the big chestnut having compiled a solid course and distance record - all four of his career wins have come there and he has added another 10 minor placings from 25 starts.

The son of Ishiguru seems like he has been around forever, but he is only seven and still chipping away in Class Four, and amazingly his rating has hovered between 48 and 60 during his 46-start career.

Far from feeling the effects of age, Call Me Achiever looked in fantastic order when he won a straight track trial at the preseason carnival and his body weight of 1,222 pounds at declaration times is within five pounds of his three previous winning body weights.

Brett Prebble retains the ride on Call Me Achiever after he rode the gelding in the final three starts of his 2014-15 campaign, with two runner-up placings and his only win of last term coming at his final start.

Prebble also had the benefit of a low draw that night and he could have the same horse sitting at his shoulder in the run, Ocean Roar, who is drawn the same gate as he was the in four, but this time with 10-pound claiming apprentice Jack Wong Ho-nam aboard.

Although statistically the extreme inside gate hasn't been kind to horses on the B course over the 1,000m in recent seasons, and it isn't ideal to have Wong pestering him on the outside, the barrier still should provide Call Me Achiever a decent launch pad and give Prebble the best chance.

Ocean Roar goes in, while another runner they faced that night, Trendiful (Eddy Lai Wai-ming) can be considered - he meets Call Me Achiever four pounds better for the half-length defeat two starts ago.

The problem with Trendiful, as with another speed horse in Jolly Posh, is they have both drawn wide, which could create some pressure up front if both hunt forward.

In the second leg, a Class Three over 1,650m, look to Caspar Fownes utlilising the seven day back-up with course specialist Royal Partner (Moreira), who has notched all three of his career victories over the Valley's extended mile and comes off an ideal prep run.

Over an unsuitably short 1,200m last week, Moreira went back from his wide draw and even though Royal Partner finished unplaced, he found the line well.

With the track running slow, Royal Partner was one of only four horses to break 23 seconds for the final 400m at the meeting, with two of the others winning and the other, Sugar City, just beating him home.

This time he will have the fitness edge on most of his rivals and gets a great chance from barrier one.

Another Fownes horse on the week back-up from 1,200m is Robust Momentum (Vincent Ho Chak-yiu). He was an upset winner in a suspect race last time, but he is obviously flying, fit and back to a more suitable trip.

Young Ranger (Derek Leung Ka-chun) broke through on the dirt in late May and returns with scope to go higher. His record doesn't read well at the Valley, but he should act there.

Horse Of Fortune (Whyte) is the other obvious selection, and Trump (Gerald Mosse) deserves some consideration.

The final leg looks by far the most difficult to find a standout selection.

Perhaps another Fownes-trained galloper on the quick back-up, Great Toplight (Nash Rawiller), could be the one to single here. He settled midfield last week but has shown his best form when on the speed and strikes a race with no speed whatsoever.

Whyte will have no choice than to put Superoi to sleep from his wide draw after the Derek Cruz-trained charge pulled last week, but if he gets some tempo, expect him to run into it.