The winning trainer, the jockey and the colours were familiar as John Moore-trained Lotus Strikes Back claimed the France Galop Cup (1,800m) at Happy Valley last night, but it was a maiden victory for the five-year-old’s singer-songwriter owner, Calvin Cheng Ka-sing.

Given a sweet ride by Joao Moreira, Lotus Strikes Back went one better at his third run for Moore after landing good seconds at Sha Tin and never really looked like being beaten despite a margin of just half a length at the finish.

And the reason the colours seemed so familiar is that Calvin Cheng is the son of Cheng Keung-fai, owner of Designs On Rome among other successful horses, and his colours are almost identical to his father’s, with just slight variations on the sleeves and cap.

“It was the horse’s 12th start here, although only his third for me, but he has needed time to acclimatise like most of the European horses and I think we’ve got him in the right frame of mind,” Moore said.

“He is no star, but he came into the Class Three with a flyweight after good form in Class Four and Joao’s given him a perfect ride, let him find his rhythm and it was nice to win for Calvin with his first horse.

“Lotus Strikes Back might have one more this season, but probably no more than that as he has been difficult to keep condition on.” It was back-to-back wins for Moreira after So Caffe’s long road back to the winner’s circle saw a drought of almost two years end with a five-length clubbing of his Class Four rivals one race before the Cup.

“He’s had tendon problems, so you never know if you’ll get them back again,” said trainer Caspar Fownes, who has only had the gelding for his four runs this season.

“He disappointed in his last two runs at Sha Tin, but he hit a wet track both times and really didn’t like that.

“Happy Valley always has a bit of cushion to it even when it’s firm and what he got tonight was what he needs, so he’ll more than likely stay racing here.

“He’ll go up a lot in the ratings I suppose for that margin but this was Class Four, in his early days he 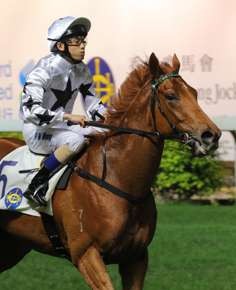 Derek Cruz took training honours with a double, making full use of both apprentices as Glory Horsie (Kei Chiong Ka-kei) and Globe Trotter (Jack Wong Ho-nam) both scrambled home with the weight relief.

“I think they are both value for the seven-pound allowance,” Cruz said. “If you get the right style of horse, and in-form horses, they can win on them.

“Both of these horses were fit and had put the writing on the wall. Glory Horsie was down to Class Five for the first time and had trialled well and Globe Trotter’s last run was a good pointer.”

Zac Purton produced the ride of the night and one of the rides of the season to win the final race on Back In Black for Paul O’Sullivan as the gelding made it five wins for the season. 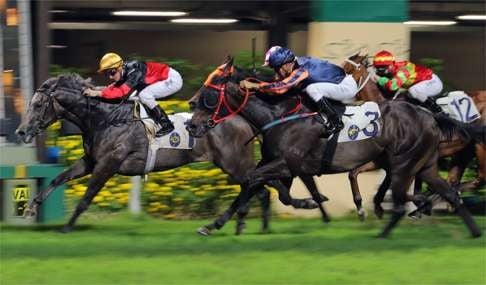 With a wide gate and a big weight, there looked nothing in Back In Black’s favour until Purton slipped him across behind the field early, railed up behind the leaders on straightening and the willing four-year-old closed it out well.

It was part of a double for Purton, too, after he had an easier task when Danny Shum Chap-shing-trained Glory Star broke his maiden with a Class Five win in the second race.

“It has taken 12 starts to win, but he handles Happy Valley well. I think he is better than a Class Five horse and next season he will be better again.”

Stewards were kept busy with Alex Lai Hoi-wing suspended for three meetings from May 29 and fined HK$15,000 for causing nasty interference on the first turn before sauntering clear on Peter Ho Leung’s Extremely Fun in the third.