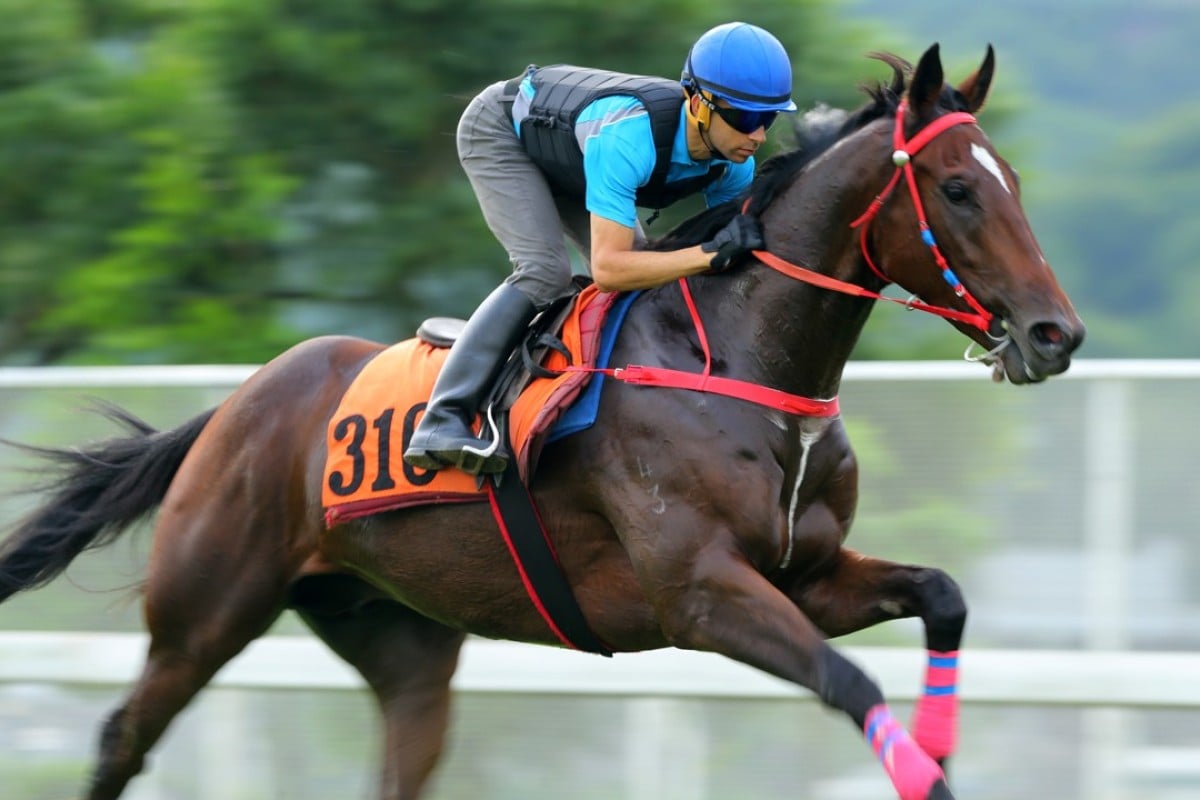 Travel Emperor gallops strongly on the turf on Thursday morning ahead of his Sunday debut, clocking 22.8 seconds for his final 400m down the back straight. Photos: Kenneth Chan.

Danny Shum Chap-shing’s three-year-old Travel Emperor can become the first graduate from this year’s Hong Kong International Sale to win when the sprinter makes his debut on Sunday at Sha Tin.

Travel Emperor is just the second horse out of this year’s sale to head to the races so far and the gelding’s trials indicate he is ready to make his mark. 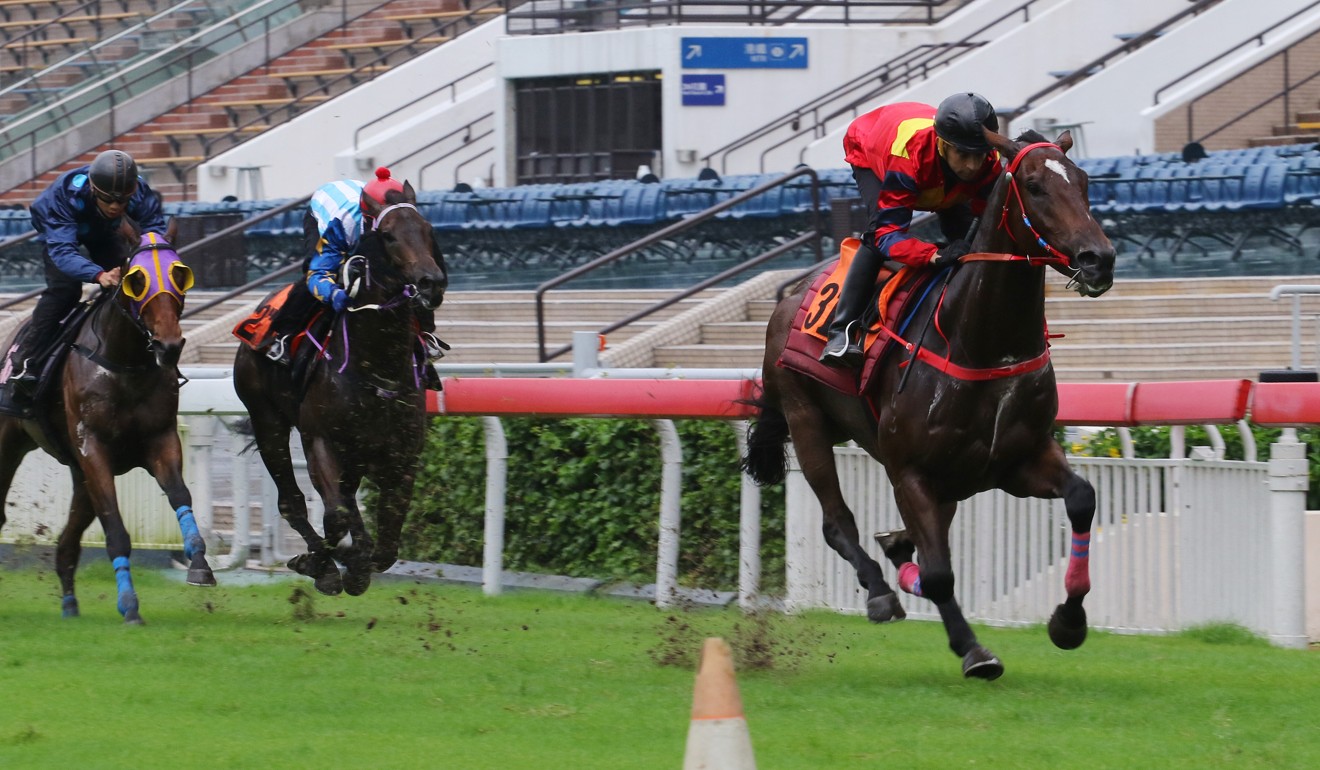 Interestingly, Shum ended up with seven of the 29 lots from the sale in his stable, including the record-breaking sales-topper, Household King, purchased for HK$10.5 million.

Household King has also been impressive at the trials but Travel Emperor gets a chance to strike first after an eye-catching hit out at the trials.

Travel Emperor’s first trial was a write-off after the sprinter missed the start and then raced greenly before Zac Purton allowed the newcomer to cruise along untested.

With Moreira aboard for the second trial, Travel Emperor was still awkward at the start, but showed better speed to lead on the dirt before being pushed along in the straight.

It was Travel Emperor’s third and final lead-up trial however where everything seemed to click, Moreira getting a clean jump and allowing the youngster to stride to the front in the 1,000m trial.

Travel Emperor is still on the raw side, and raced a little ungenerously in the early stages before a bump from a rival seemed to switch the sprinter on.

The way Travel Emperor got to the line, winning by five-and-a-half lengths under a hold in decent time, showed there is plenty to work with for Shum and another strong dirt gallop on Thursday will have him ready for the races.

A major positive is barrier 14, against the outside rail, and if Moreira can get Travel Emperor to step on terms he should be very hard to run down in an extended ratings band (60-35) Class Four that includes two Class Five runners and two other first starters. 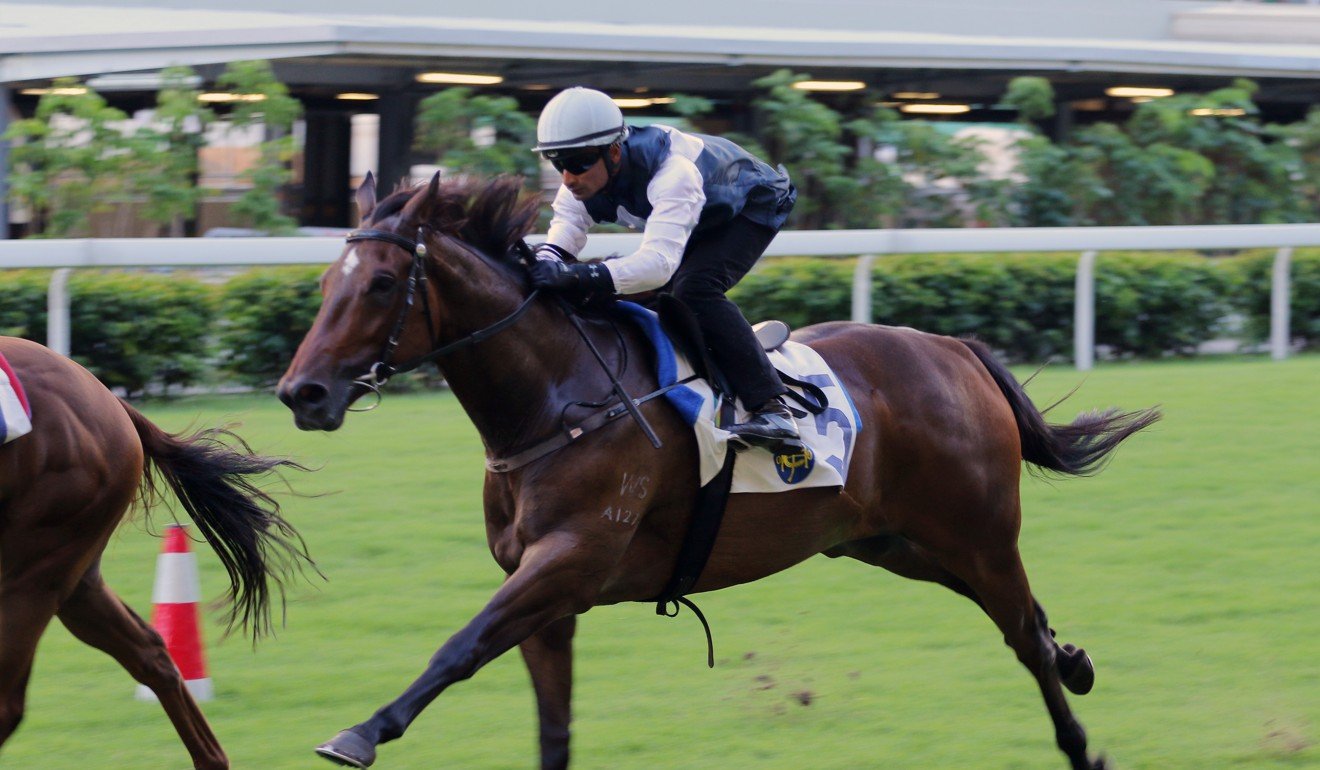 Another debutant to watch that the draw wasn’t as kind to is Sacred Ibis (Karis Teetan), out to continue the late season resurgence of trainer Paul O’Sullivan.

Sacred Ibis is a three-year-old that has shown nice progression through three trials after a mid-season setback.

The race also includes the first of the ISGs to have gone to the races, the Peter Ho Leung-trained Beaut Beaut (Umberto Rispoli).

Beaut Beaut should improve off his first-up fourth, beaten a length behind Lunar Zephyr in a straight race two weeks ago.

A messy getaway cost the three-year-old key race position on that occasion and Beaut Beaut actually made good ground on the leaders over the final 400 metres.

Beaut Beaut’s final 400m sectional of 22.82 seconds was the best in the race and was especially impressive given it came off the back off a lung busting 20.53m 800-400m split. Meanwhile, Strathclyde gives Moreira yet another likely favourite in the Class Four Ruby Handicap (1,200m) as Tony Millard tries the dirt for the first time with his sprinter.

Strathclyde returned from an early season setback gelded and with blinkers on and has put together some decent runs up the straight.

The three-year-old’s sustained speed should suit racing on the all-weather track and a good trial on the surface last week under Moreira adds some confidence.