From spectacular wins to stopping mid-race, the career of Pakistan Star has been a roller-coaster ride, but the quirky and supremely talented galloper has become the undisputed cult hero of Hong Kong racing 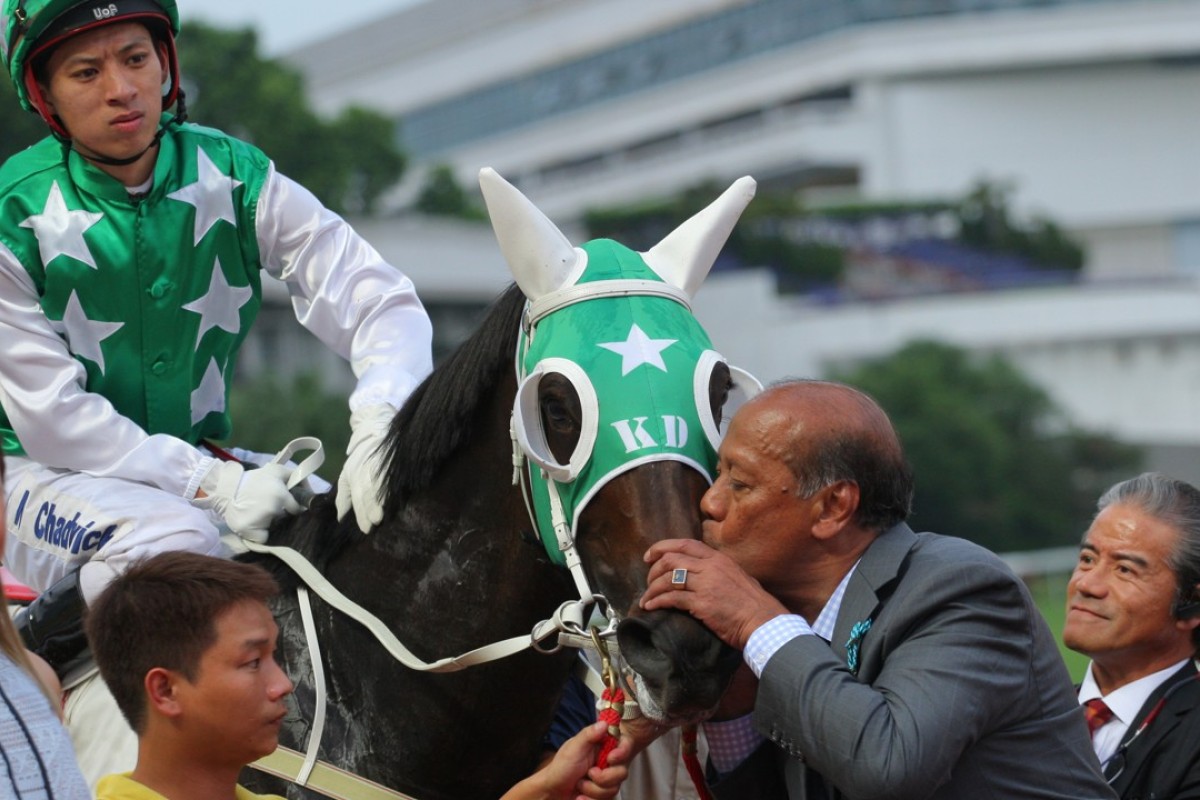 On March 2, 2013, a star was born. Pakistan Star started life at Gestüt Wittekindshof in Sauerland, Germany. We recount the cult hero’s path from raw talent, internet sensation and a racecourse ban for sensationally stopping mid-race – all the while building his status in becoming Hong Kong’s most popular racehorse.

This is the Pakistan Star story so far, in the words of people who have seen it first hand.

“(He was a) nice, quiet horse with a very good temperament. He was a good foal and he became a nice yearling, with a good gallop, nice enough for the sale at Deauville. Normally, it is not so common for the German horses to go to the August sale at Deauville but he was a good walker, everything about him was good.”

When the Jockey Club’s Hong Kong International Sale director, Mark Richards, spotted the son of Shamardal at the 2014 Arqana Deauville August Yearling Sale he saw a rough diamond. The hand-scrawled notes in his catalogue read “Fat, raw, up behind but quality”.

“His quality was unmistakable but I remember his coat was a little bit sun-bleached. Wittekindshof horses are known for their quality, they have some fantastic bloodlines; and their approach seems to be a more natural one, allowing the horses to develop and mature as nature intended which means you get a healthy, hardy individual.”

The Jockey Club paid €180,000 for the youngster with a view to on-selling him at the Hong Kong International Sale. But at the 2016 Hong Kong International breeze-up in March 2016, Lot 14 caused a stir for the first time, for all the wrong reasons. When it came time to gallop in front of prospective buyers the gelding stopped and refused to move past the 1,400m mark before handlers were forced to chase the reluctant participant along.

“He was totally lost that day.”

“Everything continued to go really well until the day before the breeze-up here. He just stopped in the tunnel going out on to the track and wouldn’t move. No reason why. Then on breeze-up day, he refused to go past the cooling fans on the outside of the track. He ended up having to be hard ridden to get going at all and didn’t finish off his gallop well.

“I was a bit gutted because we knew he had some talent.

“You can’t write what I said when he stopped.”

Sale night and it seemed the antics had put off many bidders. Had he performed without any hiccups on breeze-up day, he would have likely topped the sale.

“It was jumping HK$500,000 per bid. Luckily, when they got to HK$6 million the underbidder must have thought, ‘I’m not going against this guy, he is crazy,’ so he stopped there … I would have gone to HK$8 or HK$9 million. I wouldn’t have stopped, as I only wanted one lot, Lot 14.” 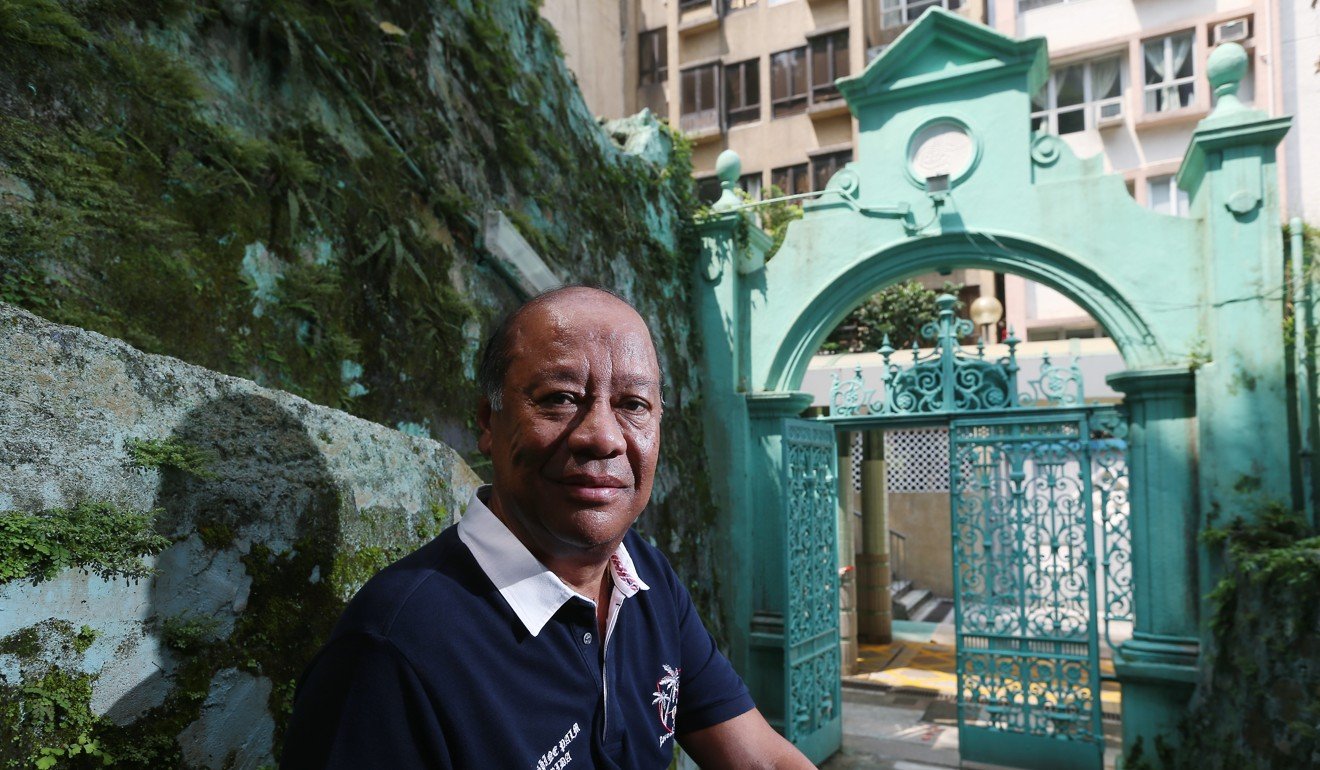 Pakistan Star won the third of his trials, swooping from behind after missing the start, but punters weren’t convinced of his chances in a 1,200m griffin race, a contest for horses in the first season.

Pakistan Star was sent out as a 15-1 outsider and after being slow away at the start, it seemed like he couldn’t keep up, let alone win. Then this happened …

“He’s very quirky, he looks after himself a bit. Mentally, he’s not there, which we’ve known ever since his breeze-up before the sale, but he is making progress in trackwork and learning all the time.”

“One highly respected form analyst based in Australia said Pakistan Star’s final 200m was the fastest at Sha Tin in 15 years and others made comparisons with Chautauqua, Able Friend, even Phar Lap. No name was big enough.”

The video of Pakistan Star’s dramatic debut then went viral, even making news in Din’s native country in the pages of Lahore-based English language daily The Nation.

Din’s sister lives in London’s Chinatown and the news even reached there.

“She saw someone watching the replay and said, ‘That’s my brother’s horse,’ and she got a free meal, some duck and rice.” 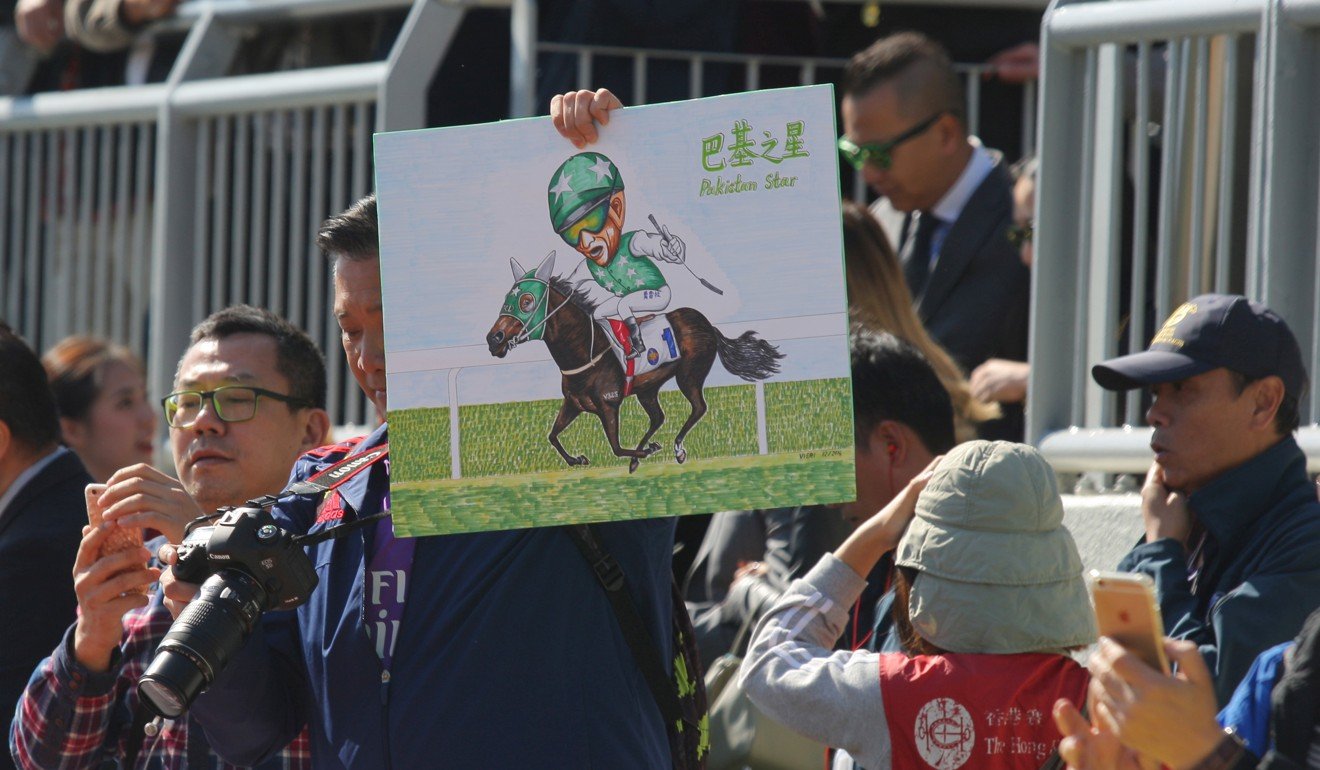 Pakistan Star’s next star was scheduled for the second weekend of the following season. With his talent well-established and fame having grown beyond belief on social media, he had the weight of public expectation and was a 1.7 favourite. Pakistan Star not only lived up to the hype, he built on it with another commanding come from behind victory.

“I think the way his handicap rating went up 30 points in just two starts had a lot to do with it (the loss). I still have faith. I think Pakistan Star is still a maturing type of horse and he’s definitely improving all the time.” 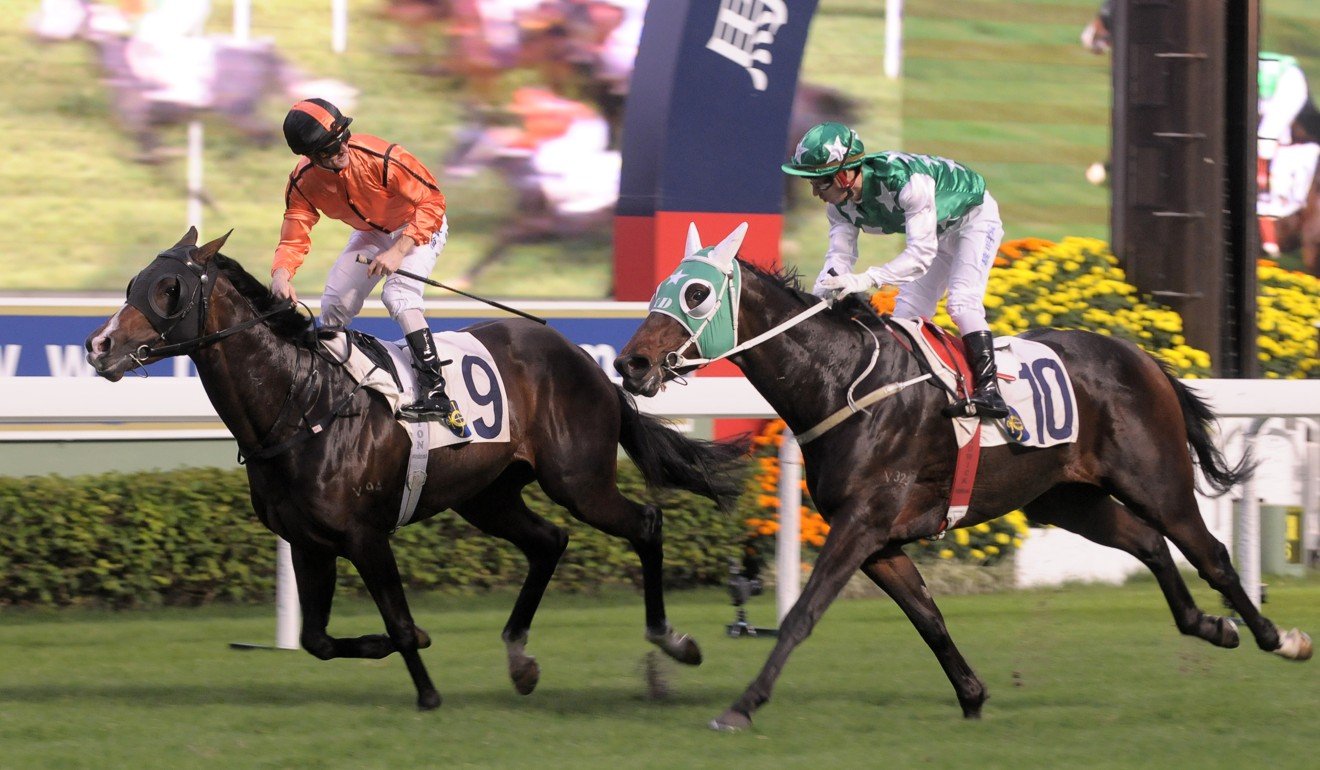 Next start, Pakistan Star was 1.5 favourite … and suffered another defeat – this time a fast-finishing second to Simply Invincible. Afterwards, there were still more complaints about the horse’s handling by the handicapper.

“Pakistan Star is like a young kid – he’s only learning, and this was just his fourth start. He was punished too hard and, for a horse still learning about racing, he was forced too quickly to have to take on experienced older horses.”

Punters hadn’t abandoned Pakistan Star – he was 1.6 favourite on international day in December against a stacked Class Two field and could only manage fifth behind Eagle Way. But now it was jockey Matthew Chadwick’s turn to take some heat. It started with a chorus of boos and Cantonese curse words from the crowd at Sha Tin.

“Yeah, of course they were screaming out the usual stuff, but also yelling “Tony, replace him!” and telling me it was a terrible ride … I just ignore it, I can’t see a problem with how I rode him.”

Chadwick was replaced by Joao Moreira for the horse’s next start.

“I don’t think Matthew did a lot wrong but you know how the system works in Hong Kong. When a horse isn’t winning, people look for a change of luck with a different jockey.” 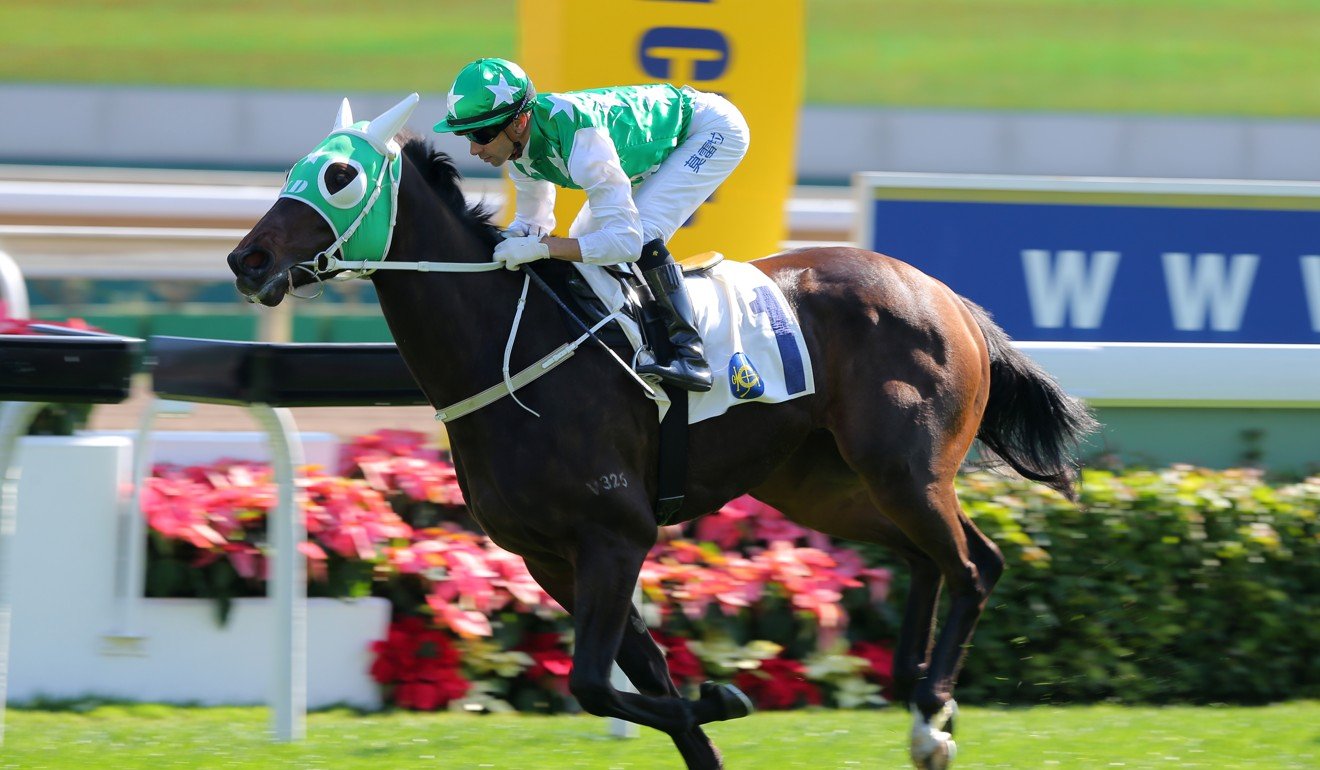 Pakistan Star faced just six overmatched rivals in the 2016 Griffin Trophy, a race for three-year-old horses imported to Hong Kong without previous racing experience. He won easily, Joao Moreira barely pushing the talented gelding as he toyed with runner-up Sea Jade in the run to the line.

“He won on class today because he’s better than those horses but he feels very immature. When he has horses around him, he is quite timid and steps back. I had to start digging him about 800m out to pick up and then I pulled him out and moved around them to give him more confidence and when I did that, I can feel the engine.”

After being aggressively ridden in the Classic Mile, a return to more conservative “closing” tactics saw the horse finish second behind champion Rapper Dragon in the next two legs. Next start saw Pakistan Star step up to Group One level for the first time in the 2017 Audemars Piguet QEII Cup, finishing second to Japanese raider Neorealism, who benefited from a beautiful ride from Joao Moreira.

“He just always looks unlucky. We thought there was a lack of pace, so we wanted him in the box seat. He was in the right place but, when they sprinted, he was spinning his wheels.”

Tony Cruz surprised many when he entered Pakistan Star for the Group Three Premier Plate on June 25 for what would be the four-year-old’s 10th run of the season, but that surprise had nothing for the shock that was in store on race day.

Pakistan Star stopped at the 1,400m mark and refused to gallop. Moreira eventually convinced the horse to move, but finished one minute after the other horses crossed the line.

“Before the race, there was no sign. He was fine in the gate, where usually he gets on his toes and wants to get going. He followed for 50 metres, got a little kickback in his face and just said no. He dug his toes into the ground and wouldn’t go.”

The Sha Tin crowd were baying for Moreira’s blood after the incident, shouting Cantonese obscenities at the leading jockey – even though he was fined for excessive use of the whip.

“I have never in my life had a good horse do something like that. Good horses normally do everything straightforward. But there is a contrast for you – the stewards think I rode him too hard and the crowd thinks I didn’t ride him hard enough, so what about that?

“I’ve been trying to think about why he did what he did and I just can’t tell you. Maybe he was in a bad mood. Whatever the case, he didn’t want to race. He looked at the other horses and said, ‘nope, you can’t force me to, I don’t want to’ and that was that.” 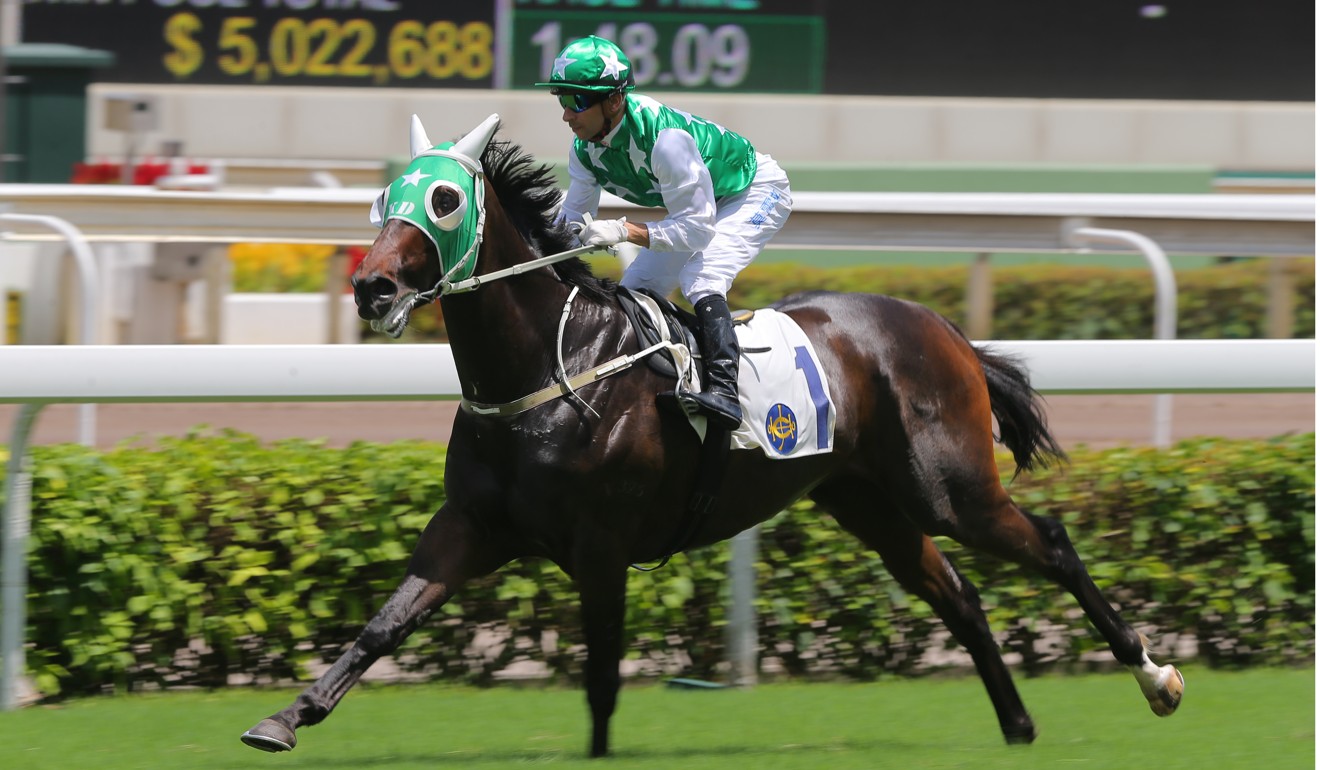 Pakistan Star had trialled once on the dirt but then pulled the same stunt again in an October trial.

“He did exactly the same as before and he did it at the same place – it is so frustrating. I tried not to let him stop totally but, even when the other horses were gone, he was refusing to go.”

That led to a meeting with stewards and a new racing ban until Pakistan Star could complete two jump-outs and two barrier trials. The fallout, including rumours the horse would be taken off Tony Cruz or even sent overseas to race, was quickly ended by owner Kerm Din.

“That type of talk upsets people. We want the horse to be in Hong Kong because that is where we are from.” 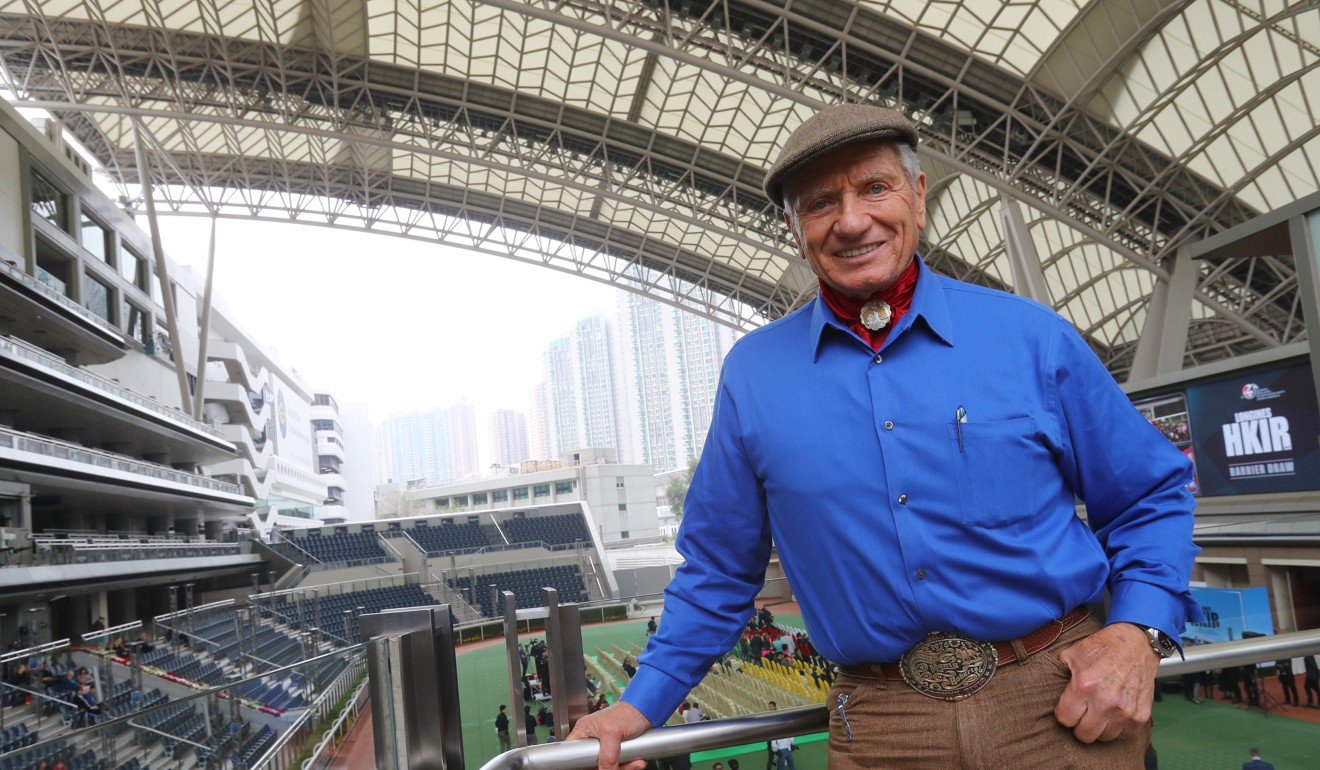 Concerned about the future of a potential superstar, Jockey Club officials facilitated a visit from famous “horse whisperer” Monty Roberts.

“Mr Cruz was very nice and cooperative. He is obviously a good horse person – he is a champion jockey and a champion trainer too, and I respect that.

“Some people said he might be difficult and not receptive, but he was great. I felt like there was mutual respect there and some respect for what I do in the world.”

Two successful trials later and Pakistan Star was cleared to go back to the races, Cruz declaring the Citi Hong Kong Gold Cup as the horse’s target on February 25. 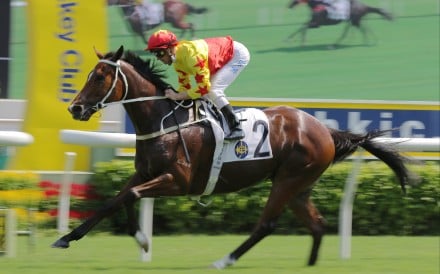 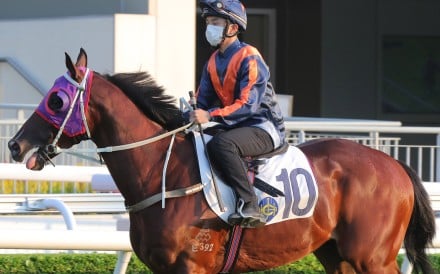 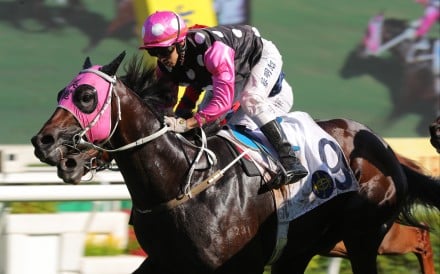 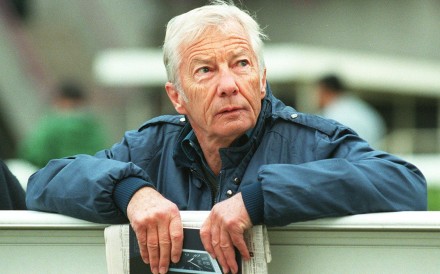