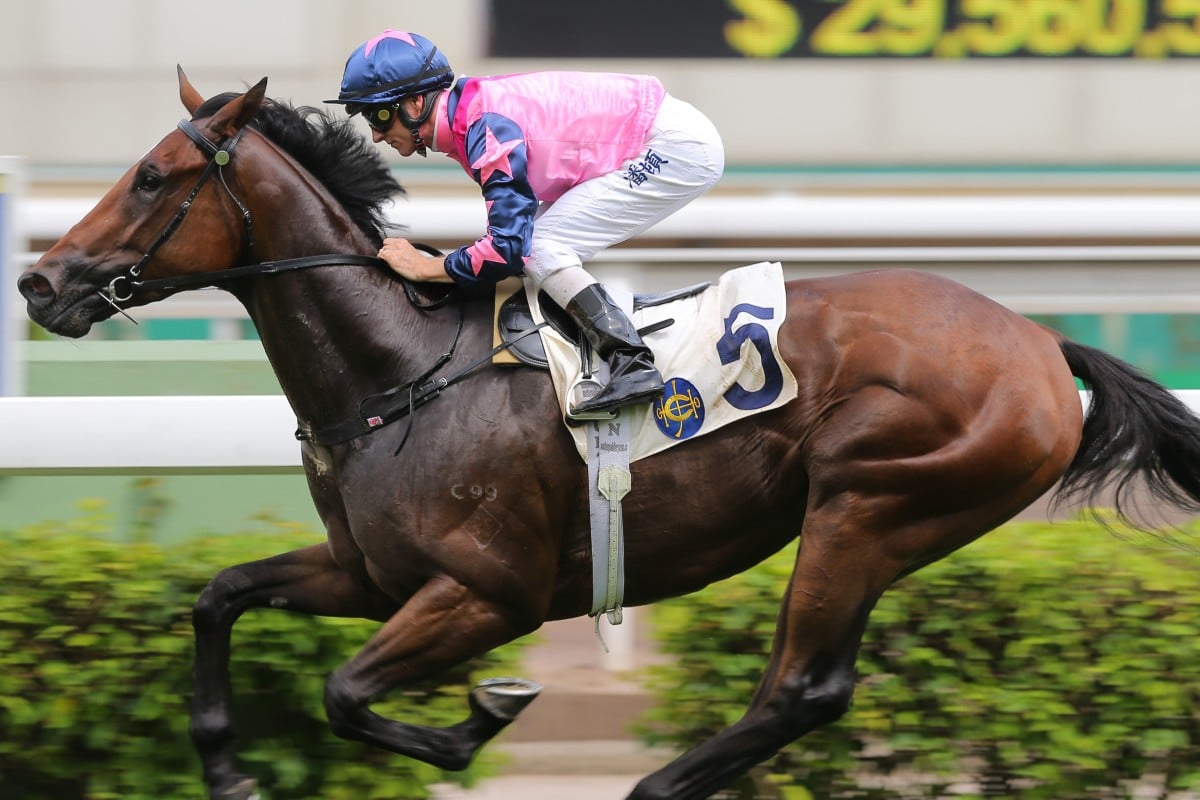 Chicken Dance in full flight as he goes on to win easily at Sha Tin. Photos: Kenneth Chan

Paul O’Sullivan’s Chicken Dance is a horse on the rise and the Kiwi trainer is hoping the import stays true to his name.

The three-year-old easily put his rivals to the sword in just his third start under jockey Zac Purton in the Class Four Kau To Shan Handicap (1,200m) at Sha Tin on Sunday in what could be a glance into the future. 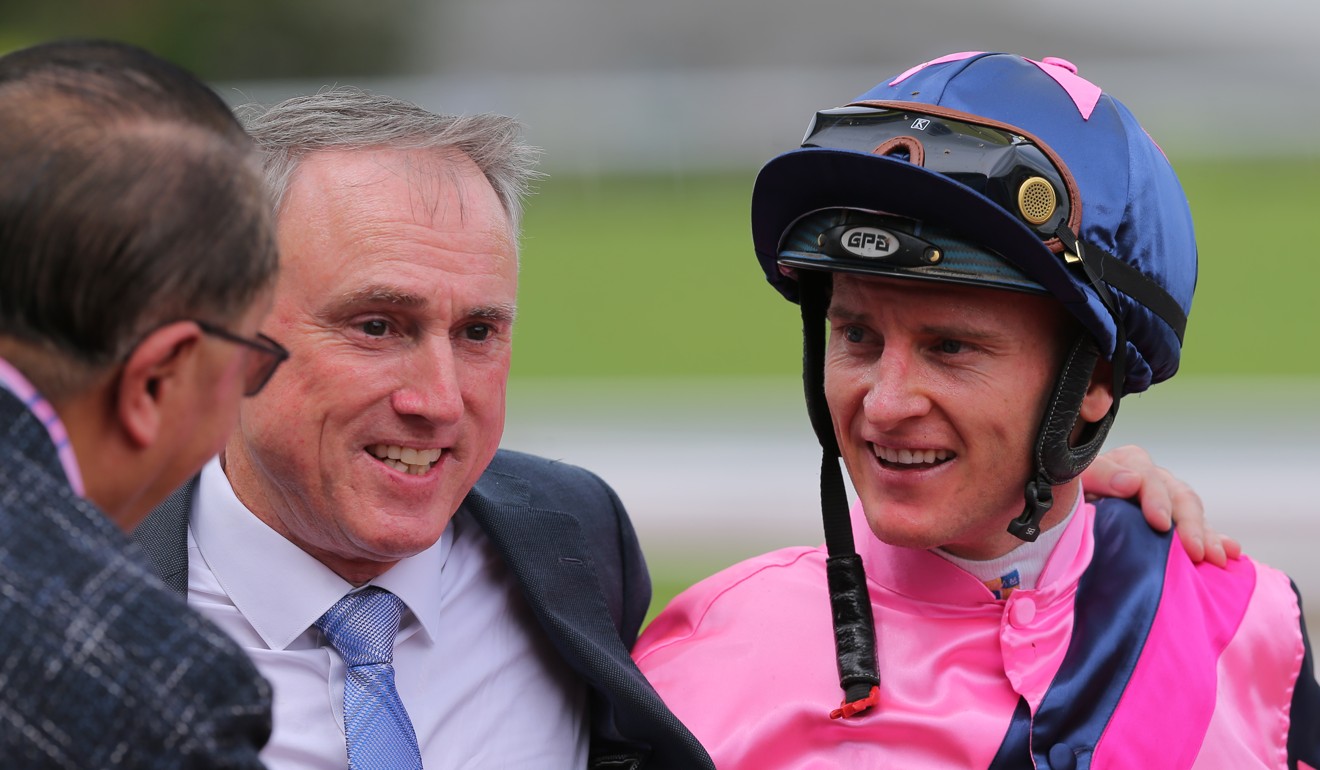 O’Sullivan said it originated from a request from the owner’s grandchildren when he was imported from his brother Lance’s stable in New Zealand.

“The grandkids wanted the name, evidently when you do the Chicken Dance, as the song goes on you go faster and faster and faster,” he laughed, while adding he hopes the horse can do the same.

“I didn’t advise them to take that name, but that was their theory behind it.

“The grandkids wanted to call it that, when they’re telling granddad what to call the horse, how can he say no? It is a strange name though.”

Chicken Dance, along with Band Of Brothers will go down as O’Sullivan’s standout horses for the 2018-19 season, who both originated from the same shipment out of New Zealand.

“From day one he looked like he was better than average and I thought today, if he was going to justify my opinion of him, he had to do that – he came out and brained them,” O’Sullivan said.

“I think out of this year, him and Band Of Brothers will be progressive so it is very good, they came here on the same flight. Another nice one for the stable from New Zealand.

“He’s owned by the nicest blokes in the world so it’s great.”

O’Sullivan said Chicken Dance would not be seen again this season with the Kiwi opting to put him away for a break before returning as a four-year-old.

“It’s a lot nicer for the owners going into the off-season with a win rather than a fifth placing,” he laughed.

Hall and So combine for first win in three years

Even though they don’t share many winners, Ben So Tik-hung and David Hall are not an unusual jockey-trainer combination so it was somewhat surprising to find out that High Rev’s victory was their first in almost three years.

The four-year-old stormed over the top of his rivals to claim the second section of the Class Four Piper’s Hill Handicap (1,400m) and a quick look through the record books revealed it was their first since Argentum prevailed on July 1, 2016. 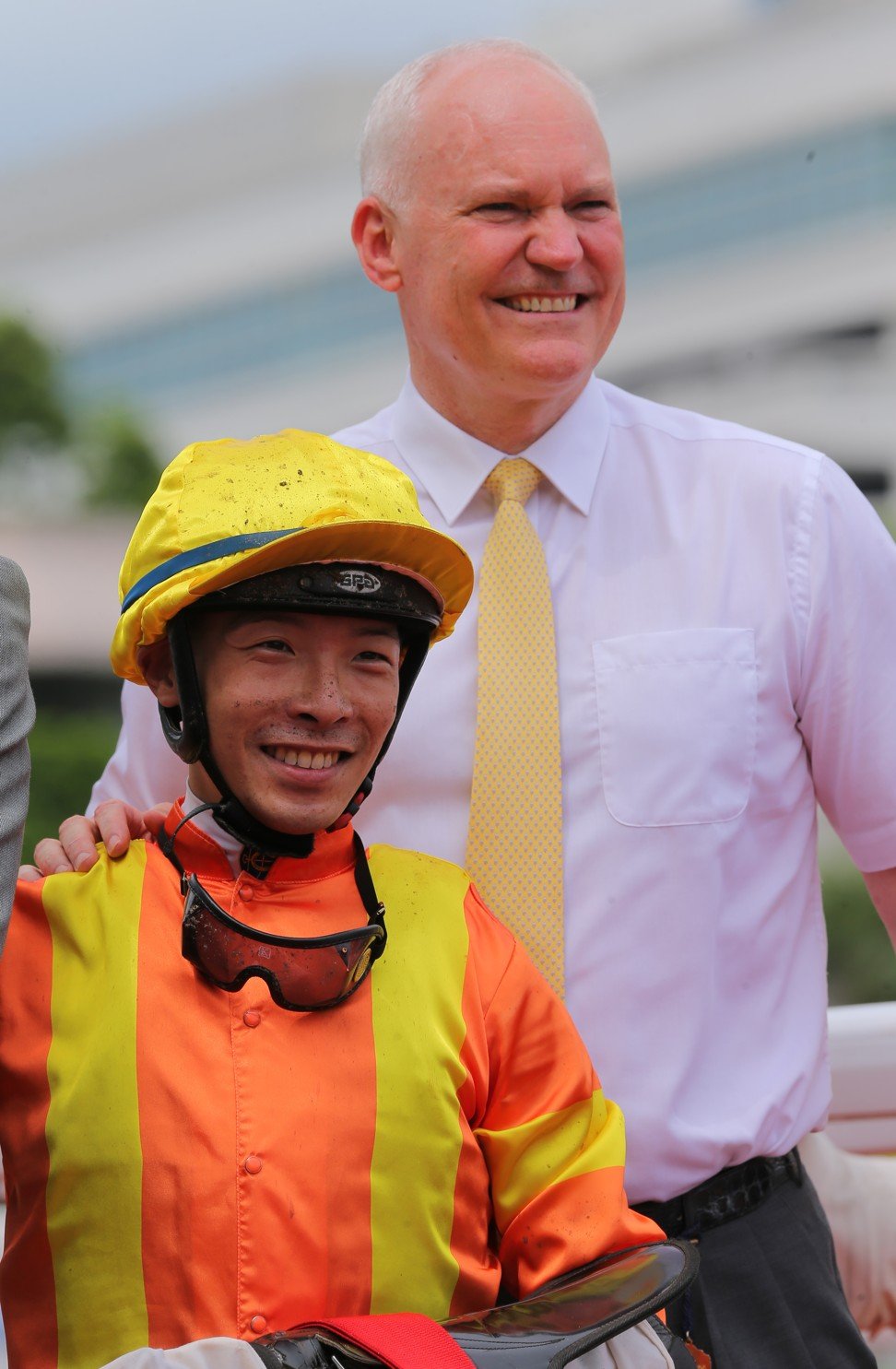 High Rev was the 66th time the two had joined forces since that date – including 30 previous rides this term. In all they have 11 winners (and 29 placings) from 219 starts together. It also marked So’s fifth win of the season.

“Ben’s always there willing to help me out in the mornings and I do give him plenty of rides – maybe not too many sharp ones or winning opportunities, so it’s nice to see him get a reward,” Hall said.

The trainer also revealed High Rev has been a work in progress and a combination of the right race circumstances and his own development resulted in a better performance.

“It’s all about the tempo and the horse finding his rhythm and not being a monkey,” Hall said. “He’s done a lot of things wrong at different times, being held up, hanging and doing all sorts of things.

“He’s always shown he’s had the ability – he ran third at his first start. So he’s been quite capable and we’ve been trying to teach him to drop his head and work out what’s the best gear for him to get his head right.

“The outside barriers have been making us ride him back, which is obviously helping us teach the horse how he should go about it, so we knew he was going to be very strong late.”

It would not shock to see Japan’s Takarazuka Kinen high on the agenda of Hong Kong’s top stayers after Lys Gracieux franked the form in Sunday’s Group One at Hanshin.

Last year an underdone Werther finished a narrow second to Mikki Rocket and this time around it was the mare who placed in both the Longines Hong Kong Vase and FWD QE II Cup this season who came out on top. 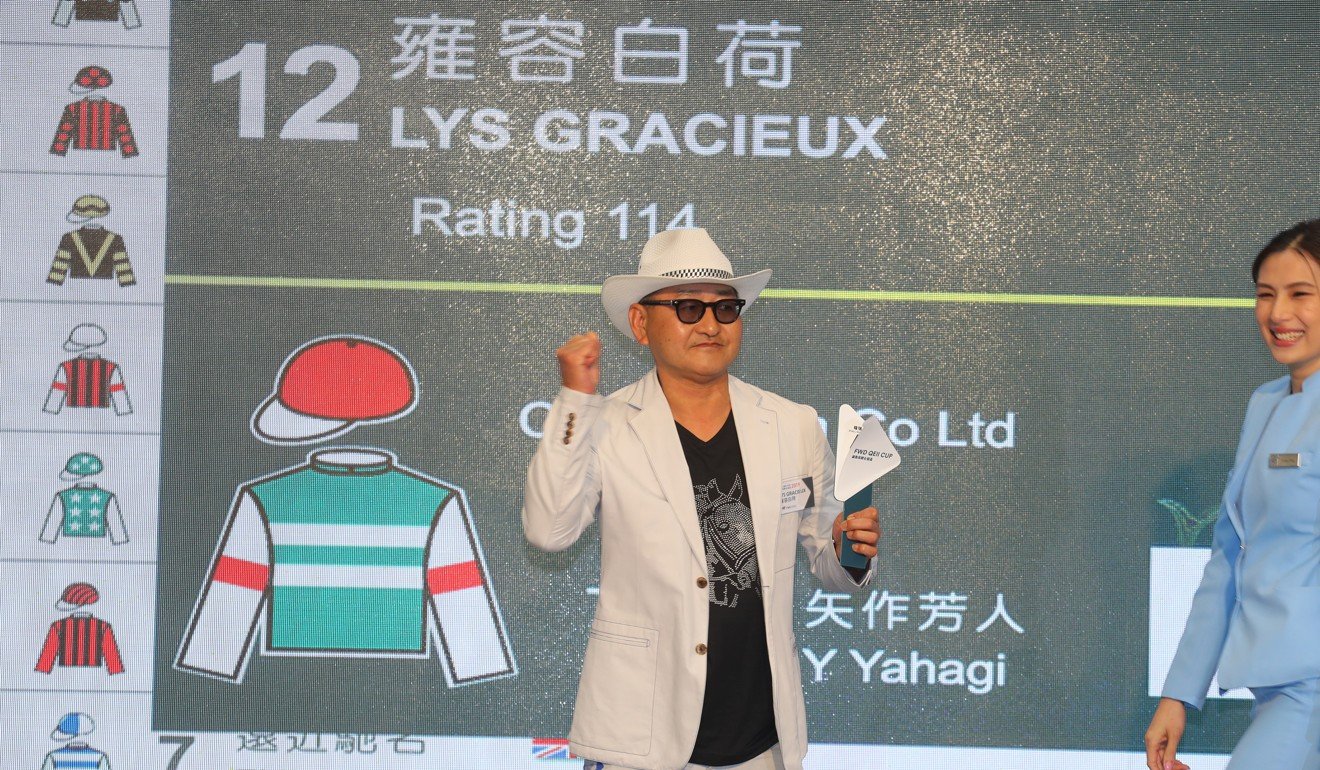 Australian jockey Damian Lane continued his remarkable form in Japan with a terrific ride aboard the Yoshito Yahagi-trained five-year-old, settling her second outside the favourite Kiseki before kicking clear in the straight to prevail with ease.

The result certainly got the attention of Exultant’s trainer Tony Cruz.

Grant van Niekerk enjoyed his biggest day in Hong Kong so far, but it came at a price as he was hit with a two-meeting suspension and HK$35,000 fine for careless riding.

The South African jockey copped the penalty for his ride on Nice Fandango in the opening race, but the hit would have been more severe if Alfred Chan Ka-hei and his mount Multimax hadn’t played a role in causing the interference that affected four other horses about 200m into the race. 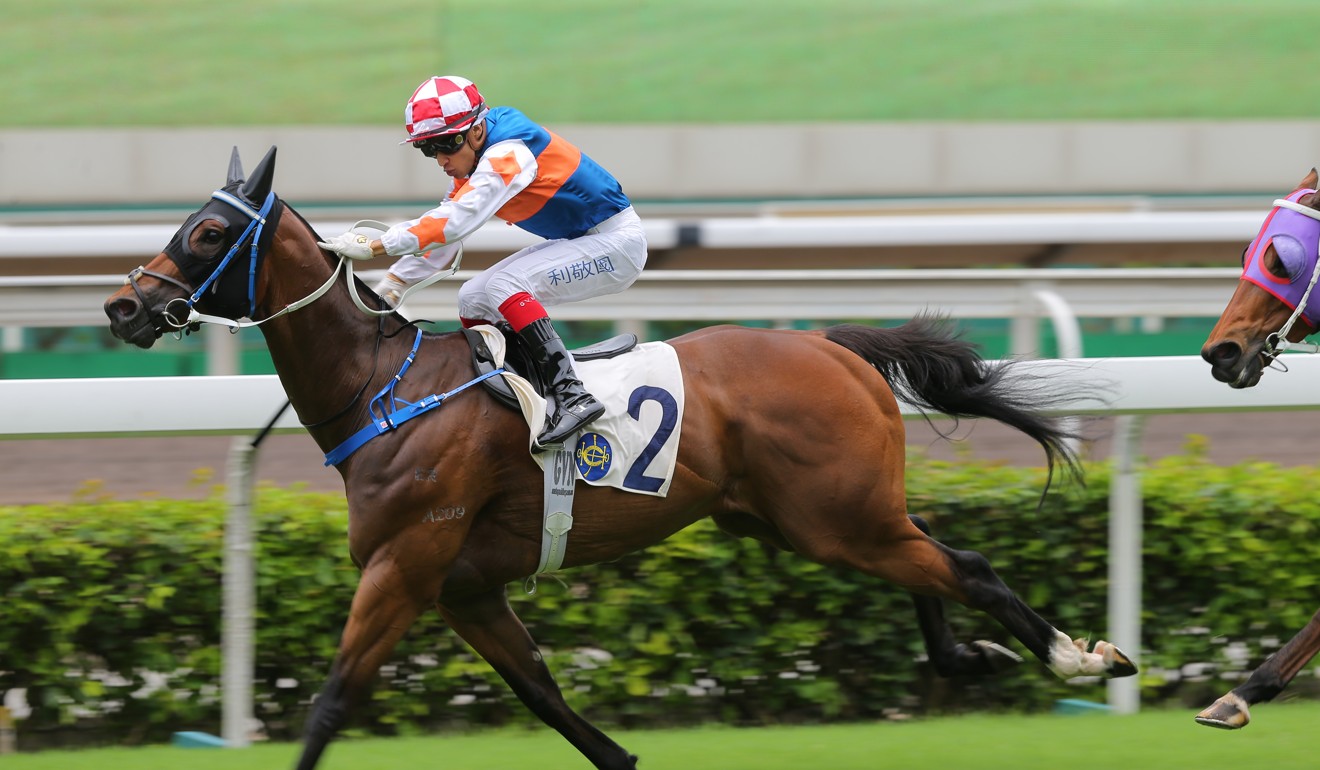 “What we found was that Chan’s horse was looking at Van Niekerk’s horse and we felt that he should’ve done more to help the riders to his inside, because they were tight before Nice Fandango turned up and we reprimanded [Chan] for that,” Jockey Club chief steward Kim Kelly said.

“But we found that Nice Fandango came in and dictated the path of Multimax and then the repercussions, particularly for Winning Circle, which was severely checked.

“When looking at penalty we took into consideration that Multimax had played an initial part in it, but we felt that in the end, there was no alternative but for Multimax to go in and that’s where the serious interference took place.

“We told Van Niekerk if it wasn’t for that contribution from Multimax, the penalty may have been more given the severity of the incident. It was something we haven’t seen for a good while and we hope not to see again for a good while.”