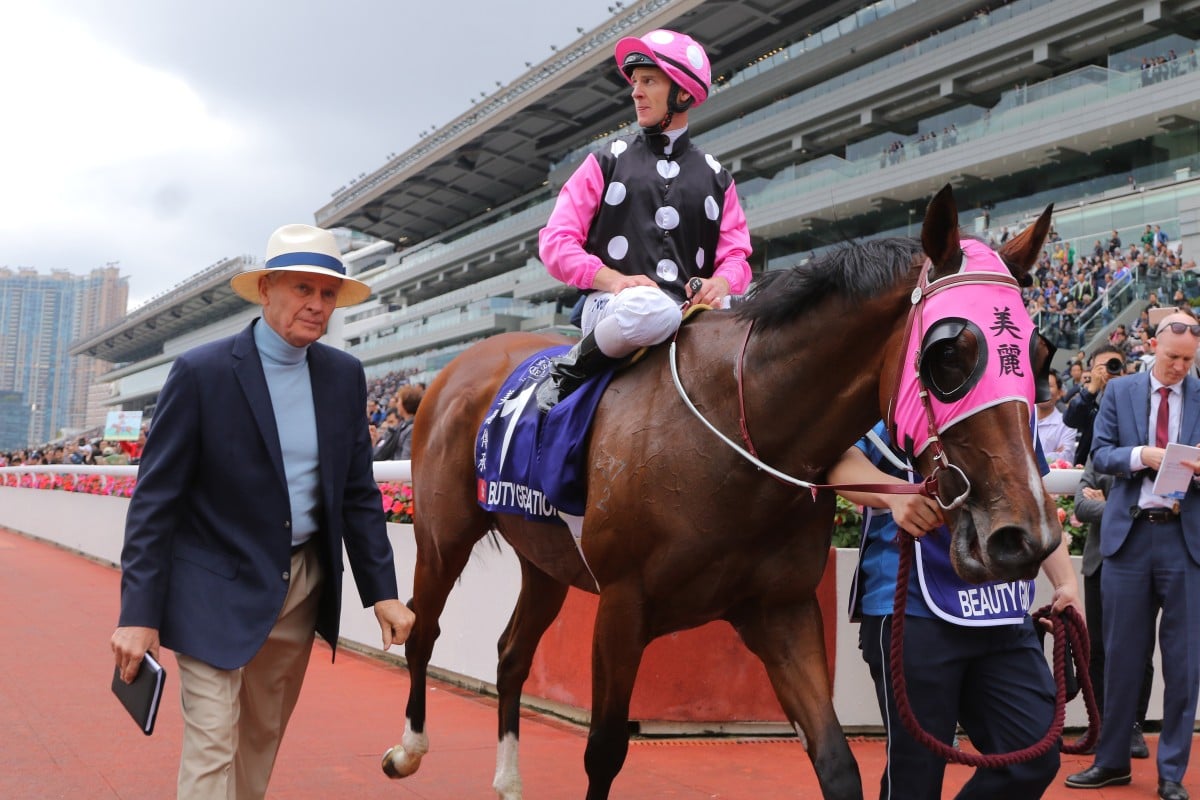 The streak is over. Beauty Generation has been beaten.

The superstar of Hong Kong racing suffered his first defeat in more than 18 months as Rise High and Waikuku ran past him to claim the Group Two Oriental Watch Sha Tin Trophy (1,600m) and stop his winning run at 10.

Beauty Generation was bulletproof last season – winning all eight of his races – and he returned in stunning fashion with a dominant victory first-up over 1,400m, smashing the track record in the process.

He was expected to continue on his merry way – he jumped at $1.30 – despite the handicap conditions forcing him to carry between 14 and 20 pounds more than all of his rivals.

Weight can stop trains, but it wasn’t meant to halt Beauty Generation on Sunday.

Everything started to unravel right from the start.

Jockey Zac Purton had to push a little harder than usual to muster speed after the barriers crashed back and was unable to take up his customary front-running role, with Ka Ying Star and Glorious Forever able to cross.

Beauty Generation seemed to resent being behind horses and trapped in the box-seat, getting his head up and over-racing at one stage.

Purton shouldered clear as they entered the straight and the seven-year-old responded to hit the lead, but the crowd gasped with 200m to go as Rise High and Waikuku loomed up and it became clear the two-time Hong Kong Horse of the Year had nothing else left in the tank.

His two rivals cruised on by and Beauty Generation did well to hold on for third. The champ was dethroned.

The Sha Tin Trophy hasn’t been kind to favourites over the journey – with just three winning since 1990.

But there are no secrets to this defeat – the conditions and circumstances of the race ultimately bringing Beauty Generation undone.

“He’s a better horse when he’s left to run along. When he’s in the box seat like that … he just doesn’t show the same turn of foot,” trainer John Moore said.

“It was just circumstances that really prevented him from really rolling along like he likes to. You could see that he was heavily restrained in behind. He just wasn’t comfortable. So from that point of view, just forgive him for it. Just wait for the set-weights races and see what happens.”

Moore also pointed to the barrier as a contributing factor to the result.

“I would’ve rather drawn a wider gate, then he could come across and been where he wants to,” he said. “Getting the gate two was probably the negative. But he’s pulled up OK.”

Despite going under, there are no concerns about Beauty Generation in the long run – his remaining races this season all carry far more favourable conditions (they are at set weights) and he is likely to be a red-hot favourite for the Jockey Club Mile as well as December’s Group One Longines Hong Kong Mile.

“I’m not worried. It’s one of those things,” Moore said.