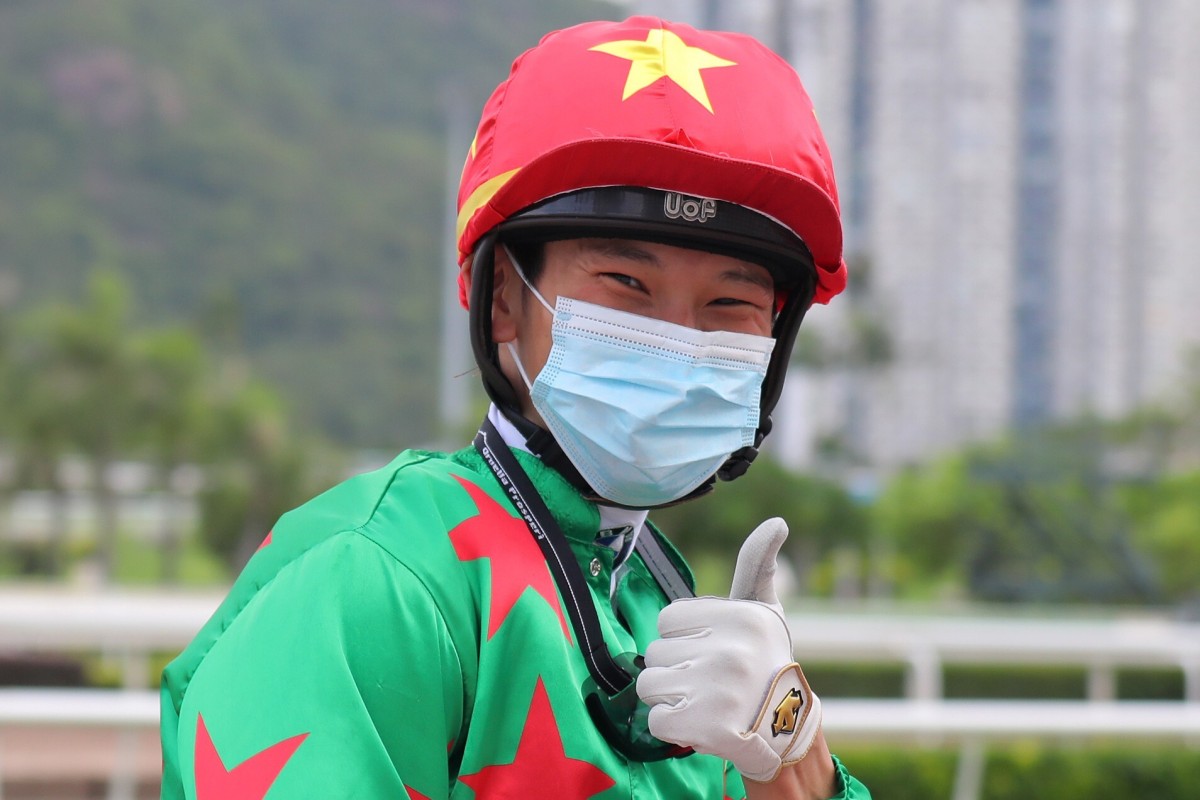 Jerry Chau is all smiles after riding his 50th winner this season. Photos: Kenneth Chan

A double with his boss Douglas Whyte helped Jerry Chau Chun-lok crack the half-century of winners at Sha Tin on Thursday and the in-form apprentice hopes they can continue their profitable partnership on Sunday.

Whyte and Chau have 18 winners together this season at 11 per cent but the strike rate jumps to more than 21 per cent since the beginning of June, a period in which the pair has seven winners from 33 attempts.

Chau is in the midst of the best season by an apprentice after sailing past Matthew Chadwick’s previous mark of 43 winners and climbs aboard another four gallopers for Whyte among his eight rides at Sha Tin this weekend. 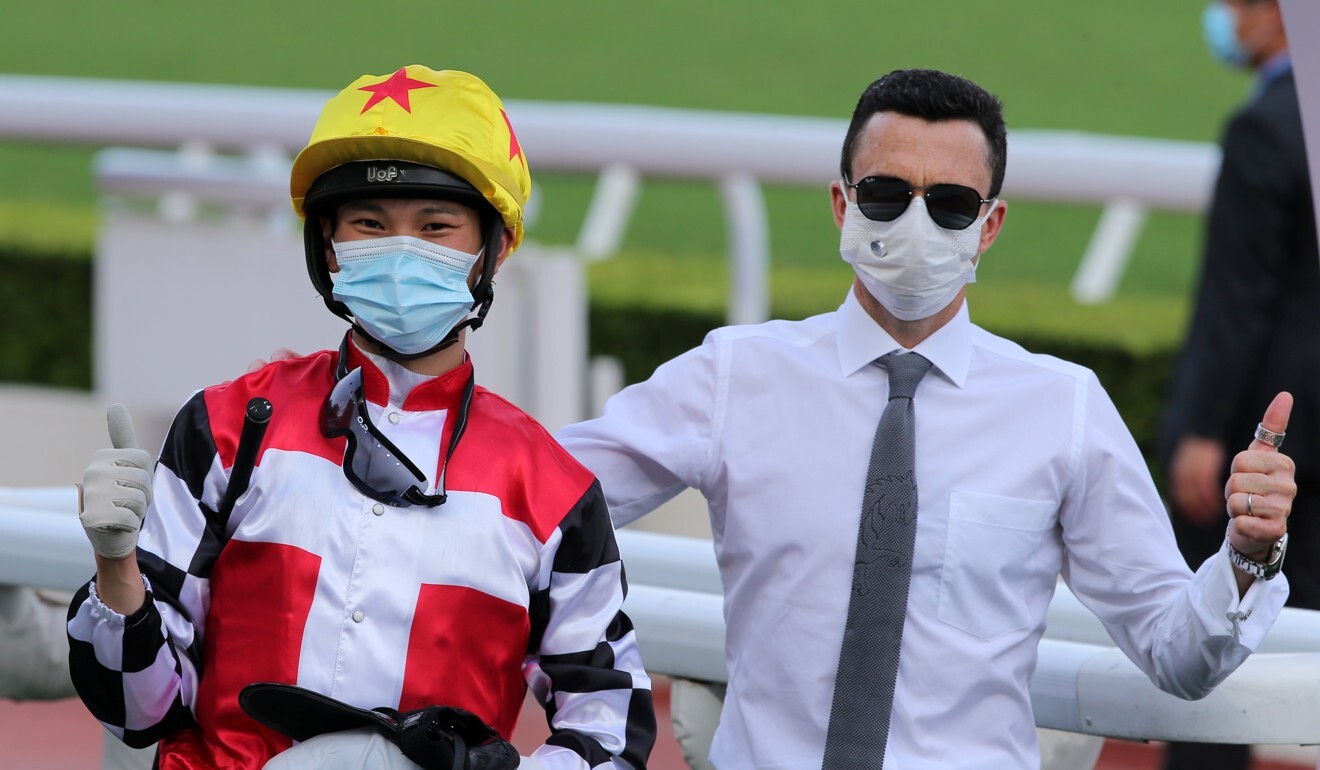 “I’m very happy to go past 50 winners this season and especially to keep riding winners for my boss. He gives a lot of his good rides to me and has taught me a lot,” Chau said.

“Four or five months ago I was still claiming seven and at that time my boss’ horses were often carrying light weights and I couldn’t take the light ride. He stopped giving me so many rides but once I was claiming five he could give me more opportunities and our form is good.”

Chau’s weight coupled with his claim has stopped him taking rides right down in the handicap but more opportunities have opened up as his claim has dropped, initially from 10 pounds to seven last November and then from seven to five in May.

Not for the first time, Whyte was full of praise for Chau after he booted home Big Fortune and First Responder during the week.

50 wins for the season! @JerryChau15 knocks up the milestone as Big Fortune staves off the fast-finishing The Golden Scenery. #HKracing pic.twitter.com/Sbz0Dmdl4D

“He’s riding well, he works hard and he deserves all the success he’s having at the moment,” Whyte said.

Chau, who has 12 winners to go until he completes his apprenticeship, highlighted Private Rocket as one of his better chances for Whyte on the weekend.

The five-year-old returns to Class Three for the Stevenson Cup (1,200m) and has only his second run on the dirt after a seventh on the surface in October 2019.

He's got a bright future! Master Eight remains unbeaten with stylish win at his Class 3 debut under Joao Moreira for @FCLOR_RACING. #HKracing pic.twitter.com/pcQXqi0jXL

“I feel in his trackwork he handles the dirt well and his form is good. I think he’s got a good chance,” Chau said.

The 21-year-old also partners Shining Red, Ourgoldenrules and second-starter Mister Snowdon for his mentor, declaring “all of them are an OK chance”.

After two wins from eight starts in Britain, Mister Snowdon ran on solidly from gate 12 for fifth over 1,200m in his Hong Kong debut last month and looks set to enjoy the step-up in trip for the Class Two Ip Jug (1,400m) for those rated 90-70, although he has drawn wide again in barrier 14.

Rounding out Chau’s book are the David Ferraris-trained Magnetism, Manfred Man Ka-leung’s Ever Laugh, Chiu Chow Brother for Benno Yung Tin-pang and the Frankie Lor Fu-chuen-trained All For St Paul’s. 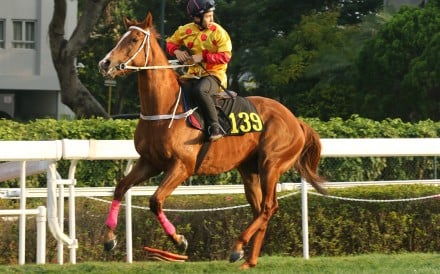 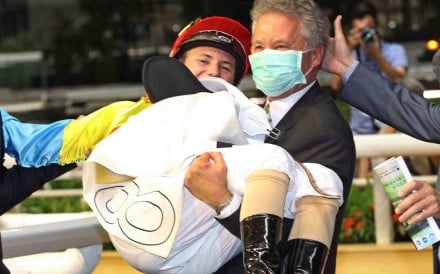 Hong Kong racing
Ferraris snares first HK winner on his dad’s horse: ‘it’s like a dream for us’ 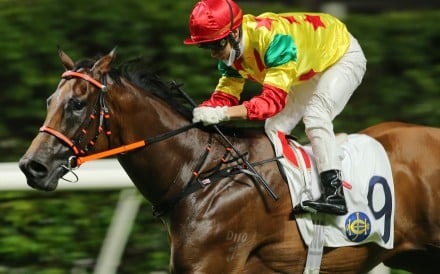 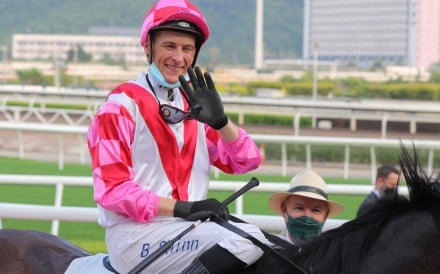 Hong Kong racing
Shinn makes a statement with Sha Tin blitz: ‘this is a different feeling’