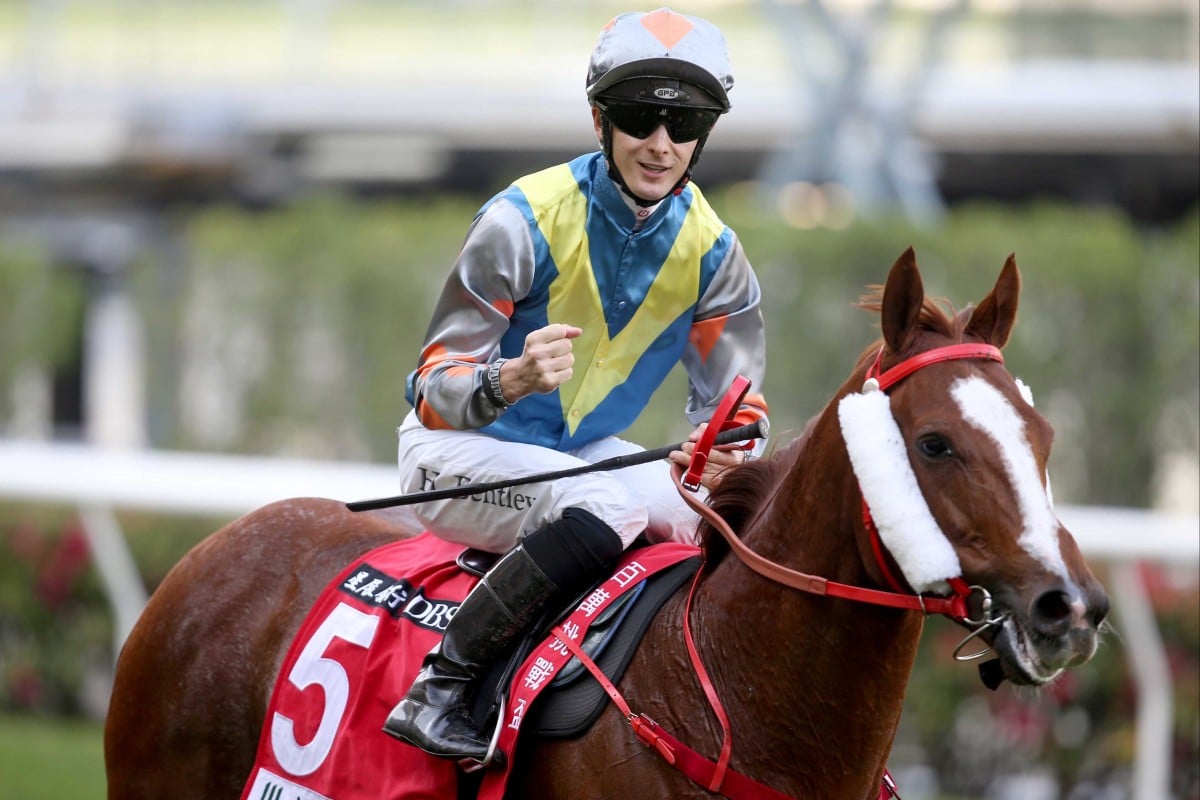 On a day when two horses paying triple-figure odds placed in the triple trio, Grateful Heart left six-up players reeling with victory at $83 in the Class Two Hip Wo Handicap (1,000m).

In a race punters expected to be fought out by up and comers Nervous Witness ($1.9) and Carroll Street ($5.3), Happy Valley specialist Grateful Heart upset the apple cart to ensure there was no winner of the six-win bonus, and a jackpot north of HK$3 million for Saturday’s Sha Tin meeting.

Grateful Heart marched through his grades with four wins at the city circuit last season on his way to taking out the DBS x Manulife Million Challenge but has been below his best since.

“I didn’t expect him to win, he had a problem but he had four wins last season to win the challenge. After that he had a suspensory problem and it took a long time for him to recover,” Shum said.

“He’s never been showing a performance [since], but maybe this race was too fast and so [jockey Harry Bentley] stayed on the fence and saved all the ground and he hit the line.”

Bentley was only aboard Grateful Heart because of the absence of the injured Luke Currie – one of two winning rides the Australian missed out on after High Rise Soldier saluted early on the card – and the Englishman seized his opportunity.

After settling Grateful Heart in the back half of the field, Bentley found the rail as the field began to circle for home and speared his mount up the inside to grab Voyage Warrior in the final strides.

Nervous Witness finished a half-length away in third after leading, with the David Hayes-trained four-year-old suffering a third consecutive defeat as the hot favourite.

📺 Welcome to Happy Valley - you're watching the @zpurton show!

The Australian is in dazzling form with his third in a row, this time aboard Lightning Storm. 🔥 #HKracing pic.twitter.com/IUX7EF42cm

Grateful Heart’s victory completed a treble for Shum after the earlier victories of Lightning Storm and Bingo Bingo and the 61-year-old was quick to share the love after moving to 26 winners for the season and into the top five in the trainers’ premiership.

“I always thank the owners for the support, I always thank my team – they work hard – and myself, I work very hard so we deserve to have a good result,” he said.

It was Ruan Maia who knocked all but one $2 ticket out of the triple trio, placing on Shum’s Common Room at $108 and Ricky Yiu Poon-fai’s debutant Sure Joyful at $106 to ensure a jackpot of over HK$2 million.

John Size continued his hot form with his second treble in the space of four days, landing the cash with Dr Winning, Toronado Phantom and Zone D.

Size has rocketed past Frankie Lor Fu-chuen in the race for the trainers’ championship and now holds a four-win lead with 47 victories for the campaign.

A remarkable 43 of those successes have come since the beginning of November and with 43 of the 88 meetings in the bank, the 11-time champion trainer is on track to better his Hong Kong record of 94 wins in a season.

Zone D was an impressive winner of the Class Three Hung To Handicap (1,650m), finishing strongly over the top of his rivals under Karis Teetan to defeat Soulmate by a length and a quarter.

Zone D’s victory followed up a last-start fourth at Happy Valley last month that landed reigning champion jockey Joao Moreira in hot water, with the Brazilian suspended for six meetings for failing to ride the galloper out to the end of the race to the satisfaction of stewards.

Zac Purton was the dominant force on Sunday afternoon with a five-timer that included victory aboard Toronado Phantom, while Karis Teetan was the other jockey with multiple winners after also saluting aboard Dr Winning to head home with a double.

Trainer Francis Lui collected a double of his own at the second and final Happy Valley day meeting of the season and it was the success of debutant Gallant Waking that most had the veteran buzzing.

The three-year-old son of Pride Of Dubai defeated Common Room by a length and a half, with $1.8 favourite Sight Hero third.

“I think he’s a nice horse. He did a good job today,” said Lui, whose other victory came thanks to High Rise Soldier.

“He surprised me a bit. He won two trials in Australia and when he came here, he didn’t show a lot in trackwork so I sent him to Conghua and his trial up there wasn’t that good. I brought him back to Sha Tin and he trialled much better at Happy Valley.”