Frankie Lor’s sprinter impresses from a bad draw to snare the finale, while the star local jockey has eight winners from the past five meetings 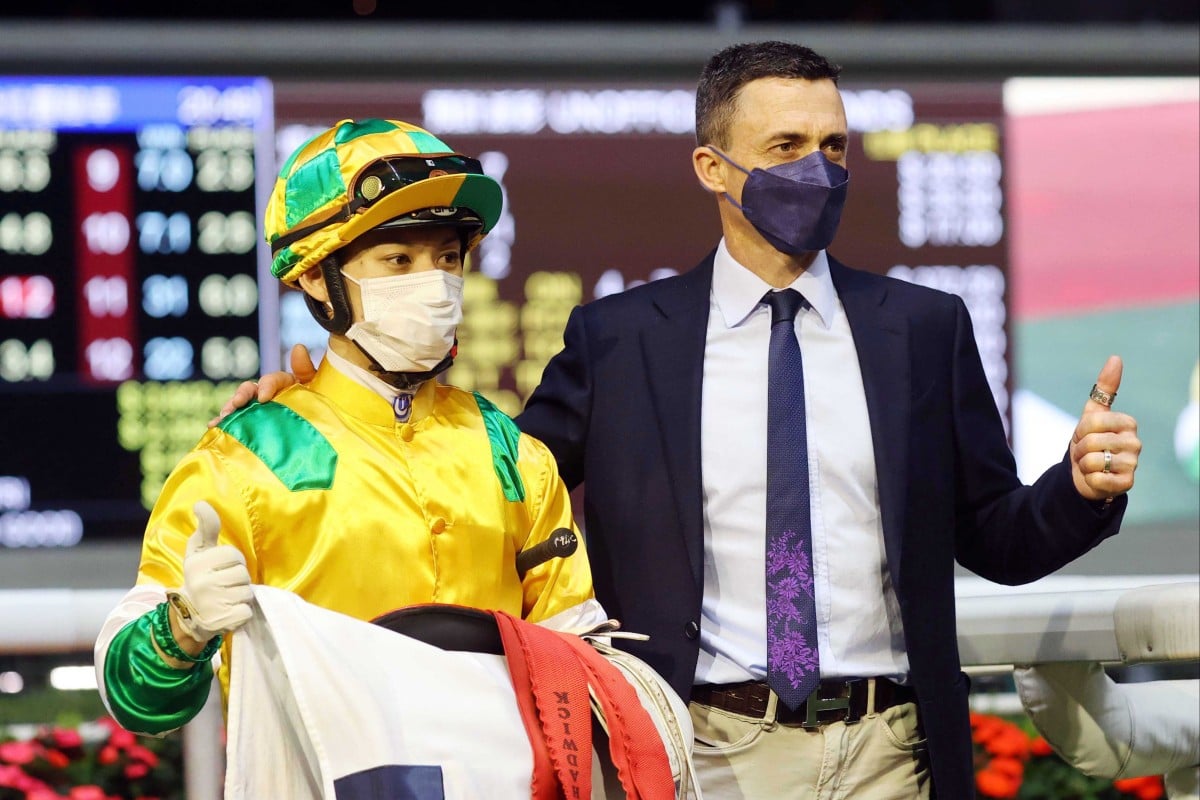 Eason confirmed himself as a sprinter on the rise to spearhead a Joao Moreira treble while Matthew Chadwick continued his sparkling run of form at Happy Valley on Wednesday night.

Chadwick had already passed last season’s total of winners heading into this meeting and his dual strike, which took him to 38 victories for the campaign, cements fourth position in the jockeys’ championship behind the perennial top three of Moreira, Zac Purton and Karis Teetan.

One of the city’s in-form riders, Chadwick has ridden eight winners from the past five meetings after this double and he was seen to great effect on Street Scream, who was forced to do things the hard way in the Class Four Matheson Handicap (1,200m).

From an outside draw in stall 12, Chadwick tried to go forward early but was trapped three wide for most of the way.

Six wins since the start of April for the 31-year-old ace, this time driving Street Scream home for trainer Tony Cruz. #HKracing pic.twitter.com/o762QepYJ4

After shooting around the field turning into the straight, he was even able to ease his mount late, such was the strength of his win.

Chadwick’s second success was far more straightforward as Smiling City justified a late gamble to win the second section of the Matheson Handicap.

Trained by Douglas Whyte, the six-year-old benefited from a good draw in stall one to hold a decent position just behind the pace before bursting clear in the straight.

“He’s had things go against him, he’s been unlucky with draws and tempo and every time he’s run over 1,650m he’s had excuses,” Whyte said.

“All he needs is a barrier and that showed tonight. I brought him back to six furlongs, he had a good gate and was able to get in a prominent position and he stayed on really well.

“In my opinion, 1,650m is probably his distance as he’s got a good turn of foot, but he’s just so unlucky.

“If he doesn’t get cover and if the tempo slows down, he starts to pull and he has an awkward head carriage. He’s not an easy ride but 1,200m makes it a lot less complicated.”

Whyte went on to complete a double when Nothing New overcame a three-wide trip to win the Class Three Canal Handicap (1,650m) under Zac Purton.

Purton’s win meant parity was briefly restored at the top of the jockeys’ championship after the Australian had earlier brought up his century of winners for the season.

Moreira beat Purton to the century for this campaign by just a few days when riding a double at Sha Tin on Sunday but the Australian joined the 100 club with victory on Viva Mama in the first section of the Class Five Percival Handicap (1,000m).

“That’s a target at the start of every season, to get to 100,” Purton said. “If you ride 100 winners, you’ve had a very good season here. We’ve got there now, so hopefully there’s a few more winners to come.”

The Australian nails his sixth consecutive century of wins in a single-season as Viva Mama goes back-to-back. 🔥 #HKracing pic.twitter.com/BulZJseIyV

Success under the lights at the Valley means that Purton has now ridden winners at 20 consecutive meetings as he attempts to land his fifth champion jockey title in Hong Kong.

Going into the final two races on the card, Purton may have hoped he would be no worse than level with the Magic Man at the end of the meeting but he instead finds himself two wins adrift.

Frankie Lor Fu-chuen’s Eason was a warm order ahead of the closing race on the card and justified that backing when blitzing his rivals in the first section of the Bowrington Handicap. From an outside draw in stall 12, he made steady ground in the back straight before striding clear to win by a length and three-quarters.