Background:
Age: 51. Englishman Richard Gibson established himself as a Group 1 trainer in France before he arrived in Hong Kong for the 2011/12 season. He gained a solid grounding in the art and science of training racehorses with Frenchmen Pascal Bary and Henri-Alex Pantall, as well as Americans Bill Mott and Gary Jones. He took out his first licence at Chantilly in 1996 and struck gold as early as 1999 when Lady Of Chad won the G1 Prix Marcel Boussac en route to becoming European Champion Juvenile Filly. He has trained the winners of eight G1s altogether, the highlights being Akeed Mofeed's and Doctor Dino's exploits in Hong Kong and the USA. His other high-class trainees prior to moving to Hong Kong include Marotta, Lune D'Or, Cut Quartz, Mores Wells, Swedish Shave, and for a short spell Dunaden. He saddled the top-class galloper Gold-Fun to run a close second in the 2016 G1 Diamond Jubilee Stakes at Royal Ascot. He added another G1 to his tally with the ever-improving Wellington in the Chairman's Sprint Prize. 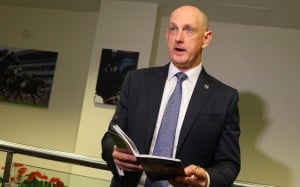