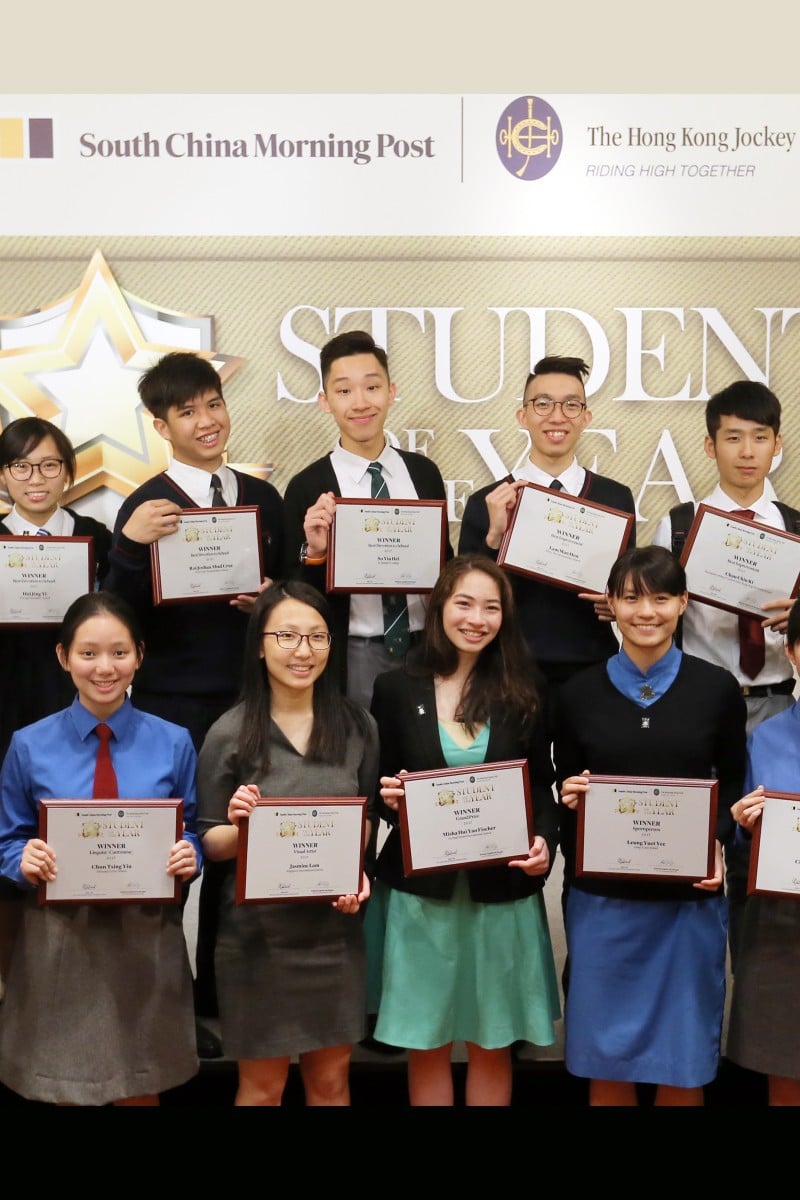 SOTY 2017: From internships and scholarships to self-improvement - this is what Student of the Year can do for you

The winners of last year’s Student of the Year awards tell us how the experience is still opening doors for them, one year on 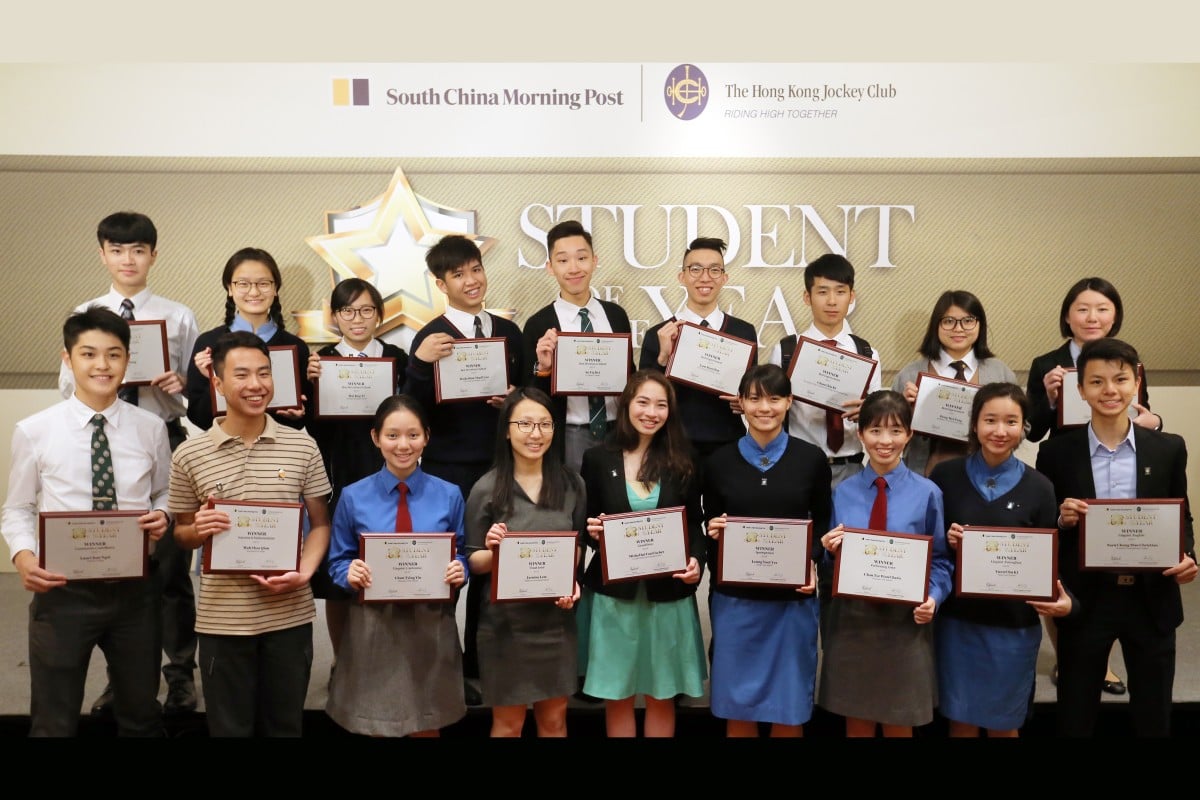 Winning competitions like the Student of the Year awards can open up new opportunities, but the experience itself is what will shape you into someone who can seize those opportunities with both hands and truly make the most of them.

If the phrase, “it’s the taking part that counts” makes you want to roll your eyes, hear us out. Winning competitions like the Student of the Year awards can open up new opportunities, but the experience itself is what will shape you into someone who can seize those opportunities with both hands and truly make the most of them.

The Student of the Year Awards competition is organised by South China Morning Post and Young Post and sponsored by The Hong Kong Jockey Club. Each year, scores of local secondary school students take part in the awards, which celebrate the achievements of Hong Kong teens in areas from maths, science, and performing arts to community contribution, and self improvement.

Taking part in the contest allows candidates to learn both from the judges and one another, test and develop their skills and grow in confidence. And while not everyone can win, everyone can certainly learn.

Being a SOTY winner helped Mah Shao-qian get a scholarship.
Photo: SCMP

Last year, Renaissance College graduate Mah Shao-qian was named a winner in the Science and Mathematics category. He said that participating in the contest helped him overcome his shyness and be more assertive in pursuing his goals.

“The whole process was beneficial, but I’m especially glad I got to meet the judges,” said Mah, describing how the industry leaders overseeing the competition provided him with advice and work experience opportunities. “For example, [Hong Kong Science and Technology Park chief executive] Albert Wong helped me secure an internship.”

Mah, who is now in his first year at the University of California, Berkeley, in the US, also received a scholarship from the Hong Kong Scholarship for Excellence Scheme, which supports students who study at world-renowned universities outside Hong Kong.

SOTY 2017: Past Grand Prize winners on life after the competition, the transition to university, and embarking on the future

“Winning a Student of the Year award really helped with getting the scholarship, which adds up to about HK$1 million over four years,” he said.

Such opportunities tend to have a knock-on effect, as in the case of Performing Artist winner Charis Chan Tsz-wun. After her win, the talented harmonica player was invited by Hong Kong’s Asia Society to perform at an event. That led to an invitation to perform for 100 students at a school in Po Leung Kuk, and an offer of a summer teaching job.

“The prize will definitely provide me with more opportunities to serve the community and perform for the public, as the coverage by South China Morning Post will allow more people to discover more about me,” she said.

SOTY 2017: Five students tell us how setting goals and meeting challenges helped them become the best version of themselves

Roi Joshua Abad Cruz took part in the Student of the Year awards because he liked the fact that the competition recognises student achievements in so many different areas. He said that winning the Best Devotion to School prize is what motivates him to improve himself and the people around him.

“I think the experience will impact my future endeavours,” he said. “I have become more competitive and driven, but at the same time I’m learning when to take it slow.”

The competition is also a good practice-ground for those who are preparing for a university interview.

Jasmine Lam, who won the Visual Artist prize last year and now attends the Bartlett School of Architecture at University College London, said, “It gave me confidence and allowed me to get used to the idea of presenting my work to more experienced, knowledgeable and slightly intimidating people.”

She learned that being able to speak with conviction about her work goes a long way. “It’s more relevant for me than ever at architecture school, especially when I have an appraisal or presentation,” she said.

Christian Suen Chung-man, who won the Linguist – English prize, says that “a lot more doors have opened to me since then, and I’ve been provided with a lot more chances”.

Now in Form Five at St. Paul’s Co-educational College, Christian is an executive board member for the Hong Kong Model United Nations, where he helps to recruit new members and organise events. He will also represent Hong Kong in a debating and public speaking competition in Toronto in April.

Christian said the Student of the Year contest made him realise just how important communication is, and he is now helping his schoolmates with their own public speaking skills. “It is good to have these skills, even later for job interviews.”

SOTY 2017: Language has the power to break down barriers, connect cultures, preserve history, and make us better people

Angel Chun Tsing-yiu shares a similar love of language, and as last year’s winner in the Linguist – Cantonese category, Angel has an even deeper appreciation of her mother tongue.

“The award is such a great honour,” said the Secondary Five student from Diocesan Girls’ School. “It’s a recognition of my passion and devotion to Cantonese, and more importantly, it reaffirms my desire to continue devoting my time and effort studying the language. It’s become my mission to protect Cantonese as a spoken language and, since the competition, I have participated in more activities that promote the language, such as debating and organising debate competitions.”

Former True Light Girls’ College student Vania Kwok Wing-yan and Queen’s College student Tse Cheung-hang are both 2017 winners of the Devotion to School award. Kwok says the prize was validation of all her hard work.

SOTY 2017: Visual Artist winner on stepping outside her comfort zone, the IB exams, and why good art doesn't have to be serious

“It meant that my efforts in school were not only appreciated by my teachers and schoolmates, but by others, too,” she said. “Now I have a clearer vision of what I want to do, and I know that devoting as much effort as I can to my school is worthwhile.”

Although she is currently studying at Baptist University (HKBU), Kwok still volunteers as a mentor at her old secondary school, even attending the school’s annual swimming gala last year. She is also now running to become the chairperson of Physical Education and Recreation management programme at the university.

Meanwhile, Cheung-hang, who received the Best Devotion prize for his work with lower form students as a school counsellor, has some advice for this year’s applicants about not being afraid of failure: “Try, and if you find you can’t do it, just take some time to reflect on it”.

SOTY 2017: Sportsperson winner and badminton star Jasmine Leung on realising her potential, and how she's repaying her sifu

For Sportsperson winner and badminton hotshot Jasmine Leung Yuet-yee, the best thing about the awards was getting to meet other candidates.

“I had the chance to get to know amazing people who were very talented in different ways,” she said. “The competition definitely broadened my horizons and gave me a great chance to learn from others.”

Best Improvement winner Cheung Yuen said the award is a recognition of her progress in both academics and sports.

“Having attended the award ceremony and learned about other awardees’ achievements, I was motivated to work harder in everything I do,” said Chueng, who is a keen bocce player, and has been a member of the Hong Kong Paralympic Committee & Sports Association for the Physically Disabled since 2014.

Now studying history at the Hong Kong Shu Yan university, she advises students to set clear goals for themselves. “That’s how you make significant improvements.”

Lai Ho-ching, another Best Improvement winner, encourages participants this year to be proud of their journey, no matter where they start or end up.

“Every challenge contributes to the sum of our life experiences,” she said.

The former Good Hope School student used to be quite shy at school, until she was forced to take a long absence. That prompted her to take a more active role when she returned – a change that didn’t go unnoticed by her teachers and peers.

“Winning the prize has made me realise that academic achievements aren’t the only way to measure a student’s worth,” Lai said. “It’s equally important to appreciate teenagers’ effort in coping with negative emotions, and overcoming obstacles in life.”

With additional reporting by Nicola Chan