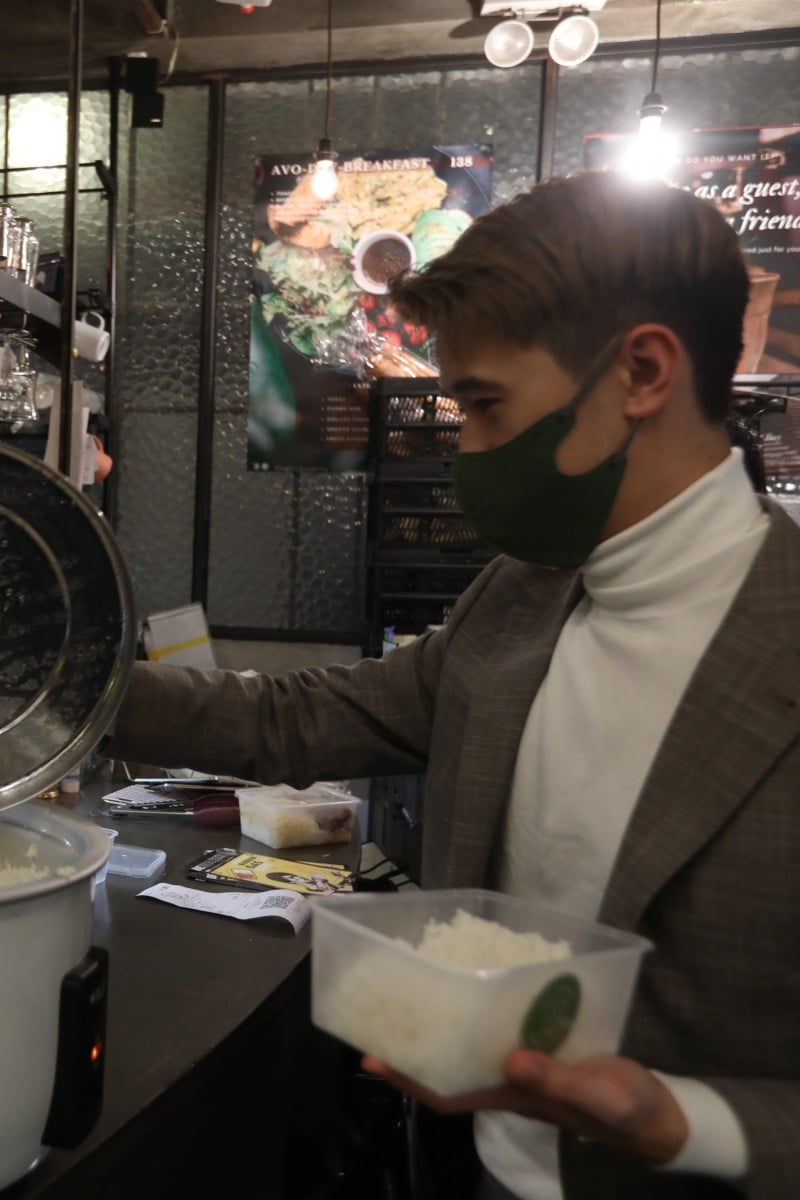 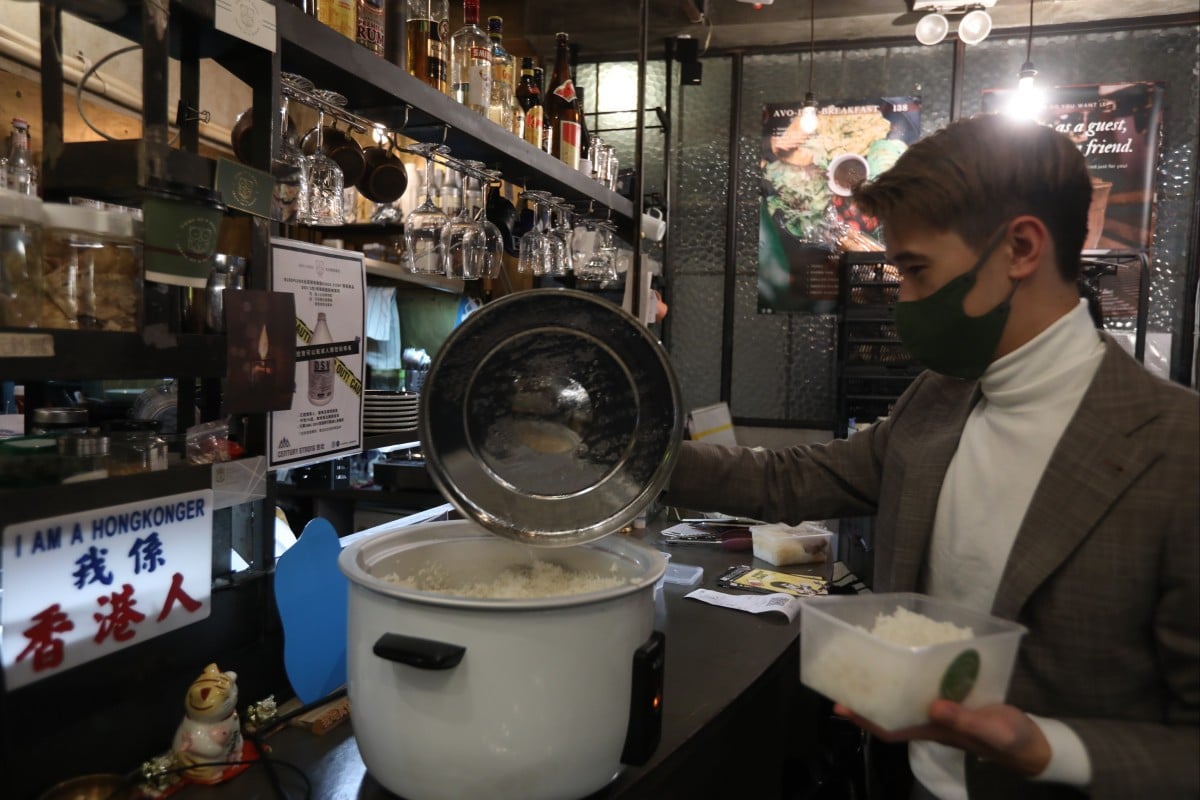 Sleepless Cafe is famous for its 3D latte art, but they started serving takeaway boxes with two dishes and rice to adapt to Hong Kong’s fifth wave. Photo: Yik Yeung-man

During the day, a little cafe in Causeway Bay serves craft coffee topped with exquisite 3D latte art. But when night comes, the eatery, like many others in the city, has been forced to find creative ways to make ends meet.

With the Hong Kong government announcing a dinner dine-in ban in January and tens of thousands of Covid-19 cases at the peak of the city’s fifth wave, Sleepless Cafe on Haven Street saw customer traffic dwindle to a trickle.

“Since the fifth wave started, our business went down by more than 60 per cent. And after the dinner dine-in ban, we really hit rock bottom. We were only earning HK$1,000 on our worst days,” said one of the eatery’s owners, 29-year-old Evelyn Ho Lok-yiu.

At first, the cafe closed during dinner hours, hoping the ban would be lifted after a few weeks. But in February, when the ban was extended to April, Ho decided she wouldn’t sit around awaiting the shop’s doom.

She remembered watching a video online about another cafe that transformed at night by selling what is known in Cantonese as “two-dish-rice boxes”.

These are typically sold for about HK$30 to HK$40 at canteen-style eateries, where customers receive rice and their choice of two dishes from a selection of Cantonese food prepared in large batches. Ho appreciated how these cafes were adapting to the times by doing something new.

“I think their spirit is really good and inspiring – the way the whole restaurant works together to weather the storm,” said Ho, who in late February decided to bring this concept to Sleepless Cafe’s dinner operations.

The eatery’s usual menu of Western fare is prepared one dish at a time, so when Ho was deciding on new menu items for the two-dish-rice boxes, she wanted foods that best served her patrons’ needs.

“I tried to put myself in my customers’ shoes and think what would I want to eat for dinner,” Ho said.

At the same time, she wanted to help those who were having trouble purchasing vegetables and meat amid the city’s panic buying frenzy in late February and early March.

“If purchasing these groceries is so hard, why don’t I do something related to people’s livelihoods – feeding them since I can order produce straight from vendors?” said Ho.

Every night, the cafe offered four to five options, such as potato and chicken stew, enoki beef rolls and vegetables.

Making large portions of Cantonese dishes is quite different from preparing Western food, which is usually cooked in individual portions. Photo: Yik Yeung-man

Some of their nighttime takeaway regulars were delivery workers from the shop opposite the cafe.

“Some of them said to me that if we did not open, they wouldn’t know what to do for dinner. Sometimes they would just eat biscuits,” said Ho.

Her cafe was not making profits, but she felt determined to stay open.

“It is better to stay open than to close our shop, feeling weary about our future and worrying that it might close any day,” she explained.

Last month, a light at the end of the tunnel appeared for restaurants when the government announced it would allow eateries to resume dine-in dinner service starting on April 21.

Ho’s cafe ended its two-dish-rice boxes on the last day of March because it had been too demanding on staff who had to adjust to cooking heaping portions of food.

“For our chefs, waiters and baristas, not only was their workload doubled, but it was also work they were not used to,” Ho explained. “It was like doing two different jobs.”

The owner is proud of what the cafe has accomplished and is excited to reopen for dinner.

“If we can resume doing what we do best at dinner hours, that will be great,” she said.

This cafe no longer serves two-dish-rice boxes, but Covid-19 has popularised this staple Hong Kong food.

Andrew Wong, a 44-year-old social worker, has been documenting the surge of this food trend since late 2020, several months after the dinner dine-in ban was first introduced.

The dish holds dear memories for Wong, who ate it often when he was a student working summer jobs.

“I seldom ate home-cooked meals as my parents were busy. So when I’m eating [two-dish-rice boxes] at the canteens, it feels like home,” he said.

Modestly priced with generous portions, the dish was not trendy when people had other dining options.

In the first half of 2021, Wong said his group did not receive a lot of buzz. But last October, the group started to grow, reaching 30,000 members last November. After the dine-in ban was reintroduced, its numbers reached more than 70,000.

During the fifth wave, Wong observed that more restaurants were selling these rice boxes across the city.

“Some media said there were at least 30 restaurants [selling rice boxes] in Sham Shui Po alone,” he said.

“Every day, more than 1,000 people are checking it out,” said the concern group founder.

For him, a two-dish-rice box must meet three criteria: reasonable taste, affordable price and large portions.

Rice with two dishes was unlike other cuisines, Wong said, as it would not get boring even if he ate it daily.

“It’s related to Chinese eating habits – we eat rice with a different dish every day ... it’s not as repetitive as eating ramen or pizza,” he said.

Quick, healthy meals you can make with frozen or canned vegetables

Besides helping members find the best deals, the group is also a space for people to connect through food.

“People chat about their lives in the group, because it [the dish] is not some delicacy,” Wong noted.

“These few years have been tough. If Hongkongers have a space to talk to each other through this rice with two dishes ... you can see that everyone treasures this city.”

A small group or number of people or things moving slowly

Death, destruction, or some other terrible fate

A state or period of uncontrolled excitement or wild behaviour

Reluctant to see or experience any more of; tired of

(of a spoon or other receptacle) having its contents piled above the brim or edge.

(of an amount, rate, or level) relatively moderate, limited or small