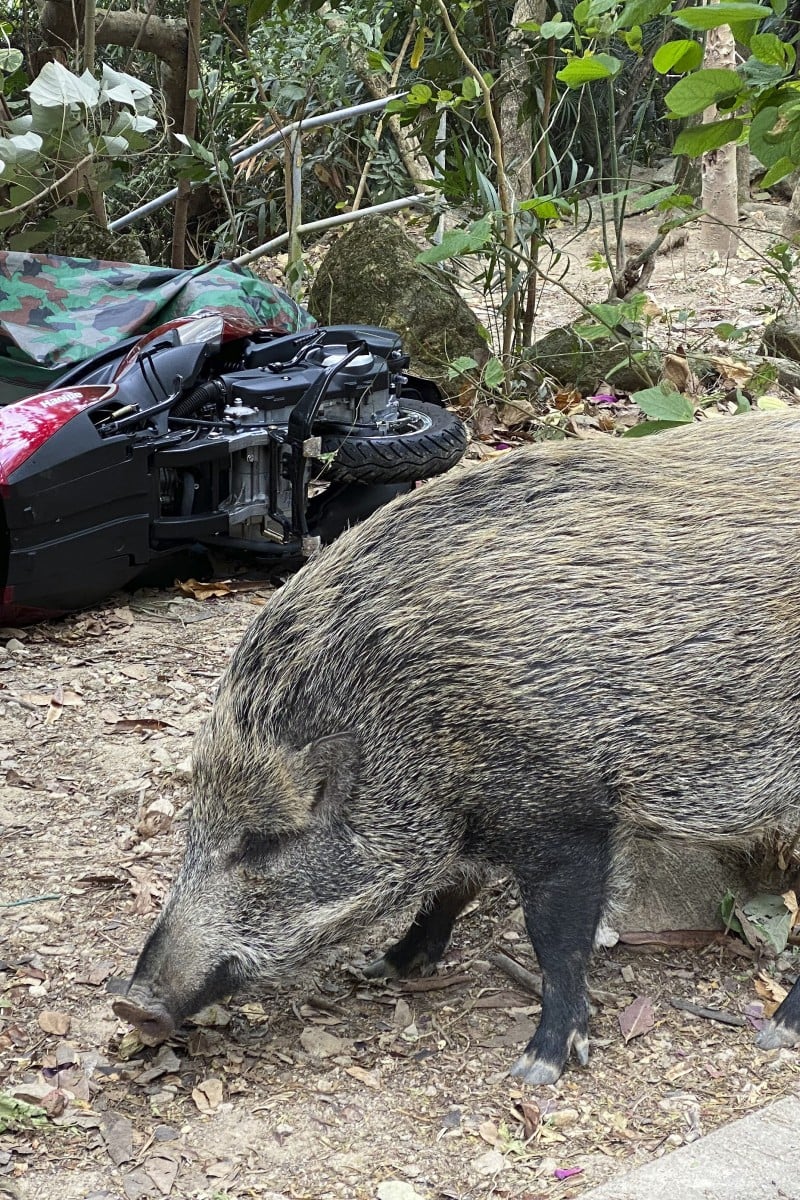 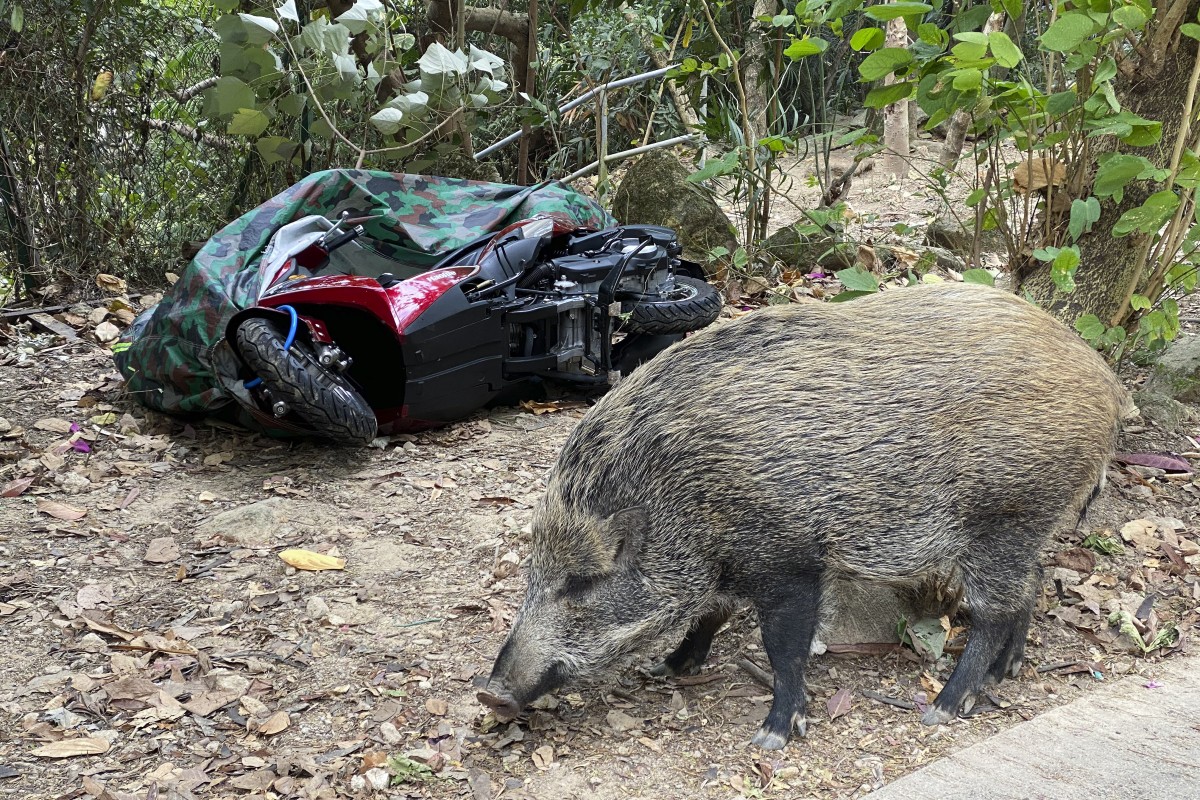 Animal advocacy groups are pushing the government to put more resources towards control methods that do not require putting down wild boars. Photo: Robert Ng

Context: Hong Kong authorities say it is time to get tough with city’s wild boars

Hong Kong authorities are considering putting down wild boars that stray into urban areas. Dr Leung Siu-fai is director of the Agriculture, Fisheries and Conservation Department (AFCD). Leung told the Legislative Council earlier this month that current control measures could not keep up with the surge in boar sightings in urban areas.

Hong Kong has about 3,000 wild boars, according to official figures, and they are not considered a protected species. The creatures can weigh up to 200kg and reach a body length of up to two metres. They are common in Hong Kong, especially in the countryside. But they are secretive and wary of human contact, so they can attack if provoked or threatened, according to the department.

Dangerous animals you could encounter on Hong Kong’s hiking trails

Wild boars are currently euthanised, or put down humanely, only if they are seriously injured or have attacked residents. So far this year, 29 wild boars have been euthanised, compared with 20 for the whole of last year and 12 in 2019.

When there were reports of damage or attacks caused by wild boars, AFCD used to allow a group of volunteers to carry out hunting operations. But that practice was suspended in 2017.

The appearance of large groups of boars looking for food from residents posed a safety risk to the public, said a spokesman for the AFCD. He added it was also dangerous how the animals had become used to wandering in busy urban or public areas.

“There is a strong need to step up efforts and switch to more effective measures to handle the proliferation of wild pig nuisance [incidents], including the humane dispatch of the pigs,” he said. Staff writers

Be careful around wild boars, as they can be very dangerous. Photo: SCMP/ May Tse

Use this cartoon to answer the questions below. Illustration: Henry Wong

Animal advocacy groups are pushing back against Hong Kong authorities’ proposal to put down the city’s wild boars, and want more resources allocated to alternative control methods instead.

Dr Leung Siu-fai, director of the Agriculture, Fisheries and Conservation Department (AFCD), said his department had tried everything from sterilising the animals, to moving them to the countryside, and educating people not to feed them – all to no avail.

“For wild boars that appear frequently and are used to being fed by people or pay constant visits to city areas, we should remove them, not just move them,” Leung said, meaning they should be killed.

The weirdest animals you need to know about

The Hong Kong Wild Boar Concern Group objected to the proposal, with committee member Roni Wong Ho-yin saying residents should learn to coexist with the animals.

“We should find ways to deal with them, not sacrifice their lives,” he said.

Wong urged authorities to put more resources and manpower into the boar sterilisation programme and try harder to teach people not to feed them.

Dr Fiona Woodhouse, deputy director of welfare at the Society for the Prevention of Cruelty to Animals, said long-term management of the wild boar population needed a combination of methods. She felt that public education, banning the feeding of the animals, and better control of rubbish bins to make scavenging harder could all prove more effective than sterilising or putting them down.

“Ideally, interventions at the pig level should be minimal,” she added.

Meanwhile, assistant professor Hannah Mumby, of the University of Hong Kong’s Ecology and Biodiversity Division, said removing potential food sources and securing food waste would help, as the main concern was the appearance of wild boars in urban areas. But she added that it was sensible to include euthanisation when reviewing strategies to control the population.

“In many places, the use of lethal means is an important part of the management strategy. The AFCD has to consider the health and behaviour of animals and the whole ecosystem that is at stake, not just one individual species,” she said. Staff writer

What to do if you find a snake in your house

Issue: Push for stiffer fines for those who feed wild animals

A Hong Kong hiker was bitten by a wild boar in July while taking photos in Tai Tam Country Park. According to a police spokesman, the boar then ran off with three or four other wild pigs after the attack. No wild boars were found in the area when emergency personnel arrived.

The woman, who suffered minor leg injuries, was taken to Pamela Youde Nethersole Eastern Hospital in Chai Wan for treatment.

The incident took place in the same neighbourhood where a young boar rode an MTR train from Quarry Bay station in June. The animal switched to the Tseung Kwan O line and crossed the harbour. It was caught unharmed and released into the wild.

The MTR-riding pig prompted calls from lawmakers to impose stiffer fines and expand a law that bans people from feeding the wild animals.

Currently, under the Wild Animals Protection Ordinance, the feeding of any wild animal is prohibited in certain areas, including Kam Shan, Lion Rock and Shing Mun country parks. Offenders can incur a maximum fine of HK$10,000.

Lawmaker Vincent Cheng Wing-shun said the incident reflected the increased public nuisance caused by wildlife and questioned whether the Agriculture, Fisheries and Conservation Department (AFCD) could improve its measures for injecting contraceptive vaccines into pigs to control their population.

According to Simon Chan Kin-fung, assistant director at the AFCD, wild boars can occasionally be found near King’s Road, where both incidents happened, as the animals are regularly fed by people in the Quarry Bay area.

Chan said the department would continue to assess the effectiveness of penalties. He added it was looking into the possibility of expanding no-feeding areas to the whole city, but would also have to consider people’s intentions in feeding the animals as well as the manpower needed to implement the measure. Staff writers