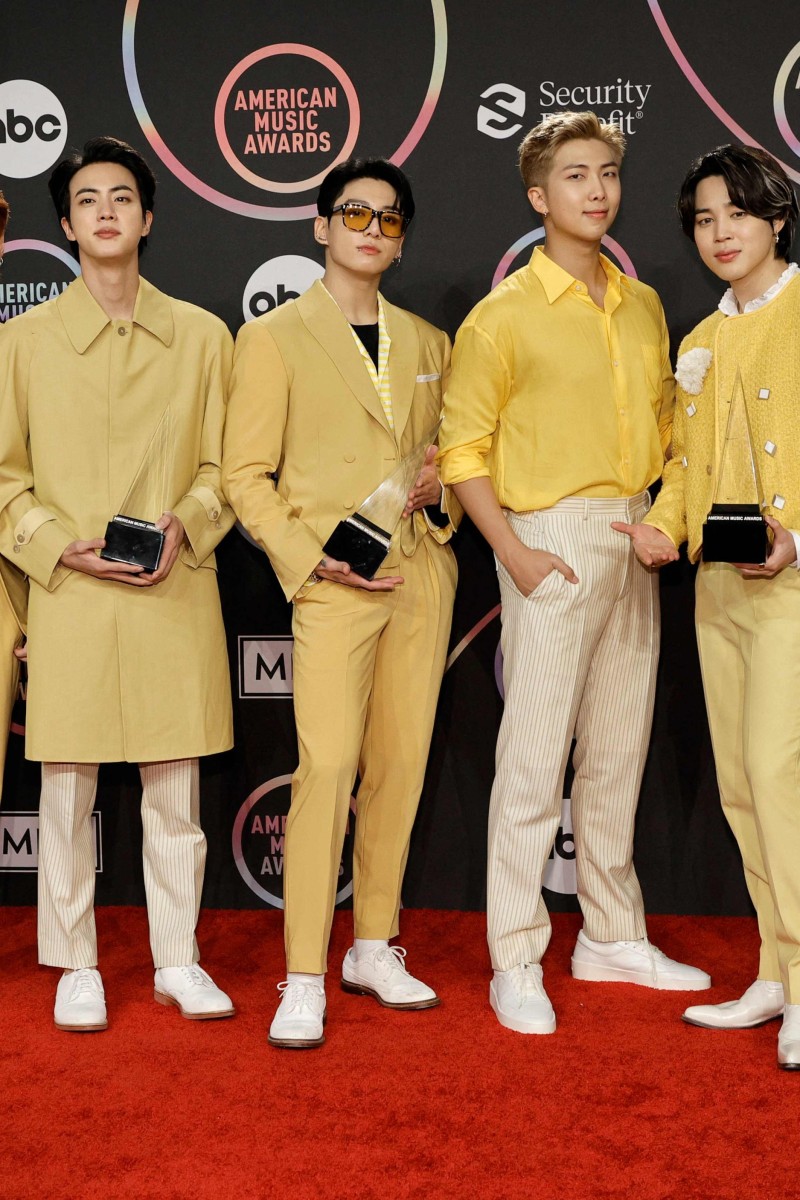 BTS: how the K-pop superband took over the world From their debut to becoming the first Korean group to receive an award at the American Music Awards, here’s a look at the boy band’s incredible journey. Photo: Getty Images/AFP

At the peak of their success, K-pop megastars BTS made an emotional announcement to fans: they were taking a break from the supergroup to focus on their solo careers.

The bombshell announcement late Tuesday night sent shock waves through the septet’s global fan base, and caused the share price of their label HYBE to plunge, even as it pushed back, saying the bandmates would still work together.

Agence France-Presse takes a look back at the band’s record-setting run to global superstardom:

On June 13, 2013, BTS debuts as a seven-member boy band. The members – J-Hope, Jimin, Jin, Jungkook, RM, Suga and V – are selected through a combination of recruitment and auditions, and undergo intensive training before the group’s launch.

Already stars in their native South Korea, the band sets their sights on the world’s largest music market: the United States.

They become the first K-pop act to perform on the televised American Music Awards.

In a vivid illustration of the band’s growing appeal, BTS becomes the first K-pop group to top the US album charts.

In May 2018, the band led the Billboard 200 – which rank albums via sales, downloads and streams – with their album “Love yourself: Tear”.

As their cultural clout grows, BTS are invited to speak at the United Nations. They use the platform to tell young people to be themselves.

Addressing a packed hall at the launch of a UNICEF youth campaign, group leader RM urges youth to “just speak yourself” regardless of their race, gender or identity.

The band sets another record, becoming the first Korean act to top Britain’s album chart with “Map of the soul: Persona”.

The milestone comes ahead of the group’s two sold-out shows at London’s famed Wembley Stadium.

After topping charts in the US and Britain, BTS takes their first “long-term” break since their debut, citing a need to “recharge and refresh”. But the band is back within weeks, with a tour that included a show in Saudi Arabia.

Before BTS became the biggest boy band in the world, the K-pop group used to have one more trainee

In September 2020, BTS becomes the first South Korean act to dominate the top US singles chart, with their English-language hit Dynamite going to number one on the Billboard Hot 100.

The group goes on to top the US singles chart repeatedly with other songs including Butter and Permission to Dance.

BTS become the first Koreans to receive a Grammy nomination.

The group is nominated for best performance by a pop duo or group for its English-language hit “Dynamite”, but fails to win.

The band is nominated again in 2021, but after being disappointed, Suga says: “I’m thankful there are still barriers and challenges we can try to work to overcome.”

BTS becomes the first Asian group to win Artist of the Year at the American Music Awards, the world’s largest fan-voted awards show.

The septet also scoops awards for Favourite Pop Duo or Group and Favourite Pop Song for their hit “Butter” at the glitzy ceremony is Los Angeles. The win marks the band’s ninth AMA.

In December 2021, HYBE announces that BTS will take a “second official extended period of rest” to recharge and seek fresh inspiration.

The band are quickly performing again, with a sold-out series of concerts in Seoul in March 2022, their first post-pandemic performances in their native land.

Members of the supergroup make statements against anti-Asian hate crimes and for inclusion and representation during the daily briefing at the White House in Washington, United States. Photo: Reuters

In June 2022, BTS visits the White House for a meeting with US President Joe Biden.

The group uses the trip to call out growing anti-Asian hate crimes in the United States.

BTS announce they’re taking a break from the group to focus on their solo careers in an emotional video appearance.

Speaking to fans in a YouTube video marking the band’s ninth anniversary, the members say they are “exhausted” and need time apart.

Their label HYBE pushes back, saying BTS will be doing “team and individual projects simultaneously”.