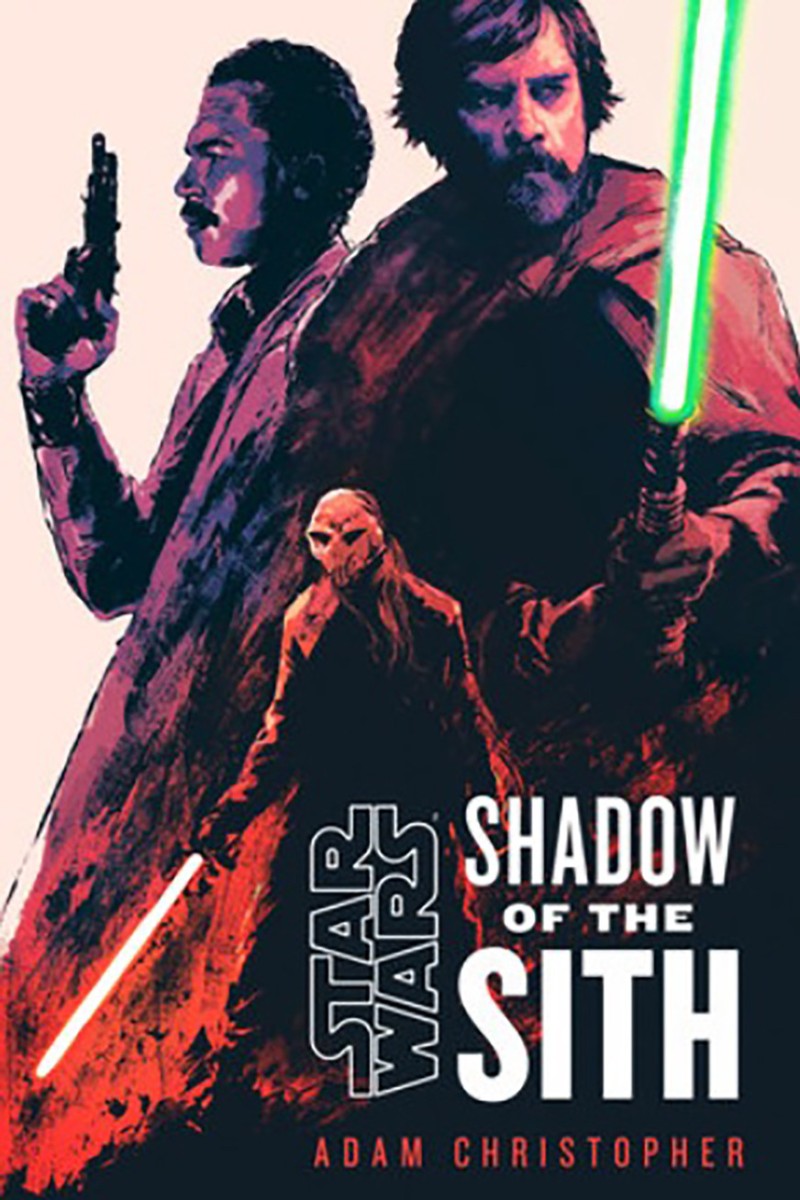 Luke and Lando find themselves on the trail of a mysterious assassin who has been tasked with kidnapping a young girl. Photo: Handout/Del Rey

Who are Rey’s parents?

That was the question that riddled Star Wars fans for years during Disney’s sequel trilogy before it was finally unveiled that they were of Sith descent and none other than the offspring of the evil Emperor Palpatine in Episode IX: The Rise of Skywalker (2019).

Now, New Zealand author Adam Christopher is filling in even more blanks with his upcoming novel, Star Wars: Shadow of the Sith (Del Rey, released on June 28), set between the events of Return of the Jedi and The Force Awakens.

Rey’s parents are revealed and readers get to learn more about Dathan and Miramir – who are always one mistake away from capture, as Palpatine’s presence looms and Jedi hunter Ochi pursues Rey as the key to the Sith’s return.

With Jedi master Luke Skywalker and fan favourite Lando Calrissian as the novel’s main characters, Christopher explores a timeline two decades after the Battle of Endor, when Skywalker senses a dark disturbance in the force (which, ahem, he is right about) and Calrissian is in pursuit of his lost daughter.

As if diehard fans aren’t getting enough with Disney+ series Obi-Wan Kenobi premiering May 27 and the “Star Wars Celebration” happening in Anaheim that same weekend, Shadow of the Sith showcases two legacy characters uncovering a mystery – but perhaps most excitingly attempts to give more meaning to the central character arc in the sequel trilogy.

8 books that have been banned or challenged around the world

Read an exclusive excerpt from Shadow of the Sith:

At first, there was nothing but empty space. And then the ship ap­peared, mass and form and structure. Here to there, crossing boundless gulfs of space, as easy as pulling a lever. It was almost magical in its simplicity.

Right then, however, the ship’s overheating navicomputer begged to differ.

For a moment, the battered old freighter just floated, hanging in space, like a garu-bear coming out of a long hibernation, taking stock of its surroundings.

And then the ship shuddered and began listing to portside, carving a long, slow spiral that was suddenly accelerated as an aft impulse stabiliser failed in a shower of white sparks. The ship’s nose dipped even further, the starboard engine now sputtering, a loose cover plate reveal­ing a dangerous red glow from beneath.

For the pilot and her two passengers, the situation had just gone from bad, to worse.

Two days. That was all they’d managed. Two days out from Jakku, limping along in a ship that shouldn’t be flying at all, but was the only hulk they’d managed to jack from Unkar Plutt’s scrapyard outside Niima Outpost. And it didn’t look like they were going to make it much farther.

Just a few hours earlier, they dared to think that maybe … they’d made it? They’d gotten out of their homestead, their all-purpose house droid, handcrafted from more scrap and salvage, sacrificing itself as it led the hunters astray. Then they found the ship (truth be told, they had long ago earmarked it for such a day – a day they hoped would never come). Launched it, just themselves, a bag of toys and books and a handful of credits, the clothes on their backs. Pointed the navi­computer along a vector that would take them way out of range (so they hoped). And buckled in for the ride.

But now? The ship had barely survived the initial trip. Escaping to Wild Space had been a desperate move, but was far from the endgame. It was supposed to be where they could hide, just for a while, take the time to make a plan and plot a course.

Those options now seemed decidedly more limited as they floated adrift. They’d escaped Jakku, only to … what? Die in the cold reaches of space, the old freighter now nothing but a tomb for the three of them, lost forever on the outskirts of the galaxy, their passing unmourned, their names unremembered.

The freighter’s interior was as old and battered as the exterior —–the flight deck was cramped and functional, the old-fashioned design re­quiring not just pilot and co-pilot but navigator, the third seat at the back of the cabin, facing away from the forward viewports. For this trip, they’d had to make do with a crew of just two.

The pilot’s seat was occupied by a young woman, her long blond hair corralled loosely with a blue tie that matched the colour of her cloak, the sleeves of her cream tunic rolled up as she leaned over the control con­sole in front of her, one hand gripping the uncooperative yoke, the other flying over buttons and switches as she fought to control the shuddering ship. The forward view, as seen through the angled, heavily scratched transparisteel viewport, showed the starscape ahead sliding diagonally as the freighter’s spin accelerated.

Behind her, a young man, his dark hair short, the beginnings of a beard over his jaw, knelt on the decking behind the navigator’s seat. His arms were wrapped around it and its small occupant, the child cradled in a padded nest formed out of a bright, multicoloured blanket, a stark contrast with the drab, greasy gunmetal of the flight deck.

The man craned his neck around as he watched his wife wrestle with the controls, then he stood and leaned down to kiss the head of the six-year-old girl strapped securely in the seat, a large pair of navigator’s sound-deadening headphones over her ears. In front of the girl, the an­cient navigation panel —–a square matrix of hundreds of individual tiny square lights —–flashed in multicoloured patterns of moving shapes, a simple game the girl’s mother had loaded into the auxiliary computer to keep her daughter occupied on the long journey.

The man looked up at the game board, but the girl had stopped play­ing. He moved around to the front of the chair and saw she had her eyes screwed tightly shut. He leaned in, embracing his daughter.

There was a bang; Dathan felt it as much as he heard it as another part of the strained engines gave up, the small explosion reverberating through the ship. A tear ran down from Rey’s closed eyes. Dathan wiped it away, and closed his own eyes, wishing that, for once, a little good luck would come their way.

“Okay, there we go!” Miramir yelled, following her statement with a whoop of triumph. The ship jolted once, and then the steady shaking stopped. Through the forward viewports, the stars were now completely still.

Despite himself, despite their situation, Dathan found himself smil­ing. He couldn’t help it. His wife was a genius and he loved her. He didn’t know where she got it from, but she was a natural, like it was ge­netic. She could fly anything, had been —–and still was —–a self-taught engineer and inventor. Tinkering, Miramir called it, as though it were nothing, as though she didn’t realise just how special her talents were. In the years that he had known her, Dathan had often asked where this gift had come from, but Miramir would just shrug and say her grand­mother was a wonderful woman. Dathan knew that to be true —–he had met her, several times, before Miramir gave up her life in the twilight forest of Hyperkarn to travel with Dathan. But then … where had her grandmother learned it all?

Dathan wanted to know, but over time he’d learned not to ask any further. Miramir missed her grandmother. She missed her home.

That was something else Dathan had tried to understand. To be homesick, to miss something that you could never return to —–that was something unknown to him. Oh sure, he could understand it. And yes, he felt something for his days on Hyperkarn, even the years on Jakku, but he wasn’t sure it was the same. Neither of those places had been truly home.

He did have a home, a place he could legitimately say he came from. It was a place he revisited a lot, in dreams.

“That will hold for a while,” said Miramir, releasing the yoke and reaching up to flick a series of heavy switches in the angled panel above the pilot’s position. “I’ve rerouted reserve power into the starboard im­pulse stabiliser, and then pushed the angle of the field way beyond point-seven, but that’s fine because–”

She stopped as Dathan dropped into the co-pilot’s seat and looked at her, one eyebrow raised.

“I don’t know what any of that means,” he said, “except that we’re safe, right?”

Miramir sat back, her slight form dwarfed by the pilot’s seat. She grinned and nodded.

Dathan felt his own grin growing. Miramir’s happiness —–her relief —–was infectious. Maybe they would get out of this after all.

“The stabilisers will hold until the hyperdrive resets,” said Miramir. “The motivator overheats every time we make a jump, but it’s still work­ing for the moment. We should be good for another couple of jumps.” She paused, then wrinkled her nose. “But we do need to find another ship. Which means …” She gestured at the viewports, to the infinite emptiness that was Wild Space.

Dathan nodded. “Which means heading back to the Outer Rim.”

At that, Miramir unclipped her seat restraints and headed over to Rey. Kneeling by the navigator’s seat, she gently lifted the headphones off her daughter’s head, then unclipped the seat restraints. As soon as she was freed, Rey sprang out of the seat and tackled her mother, arms and legs wrapped around her, her head buried in her chest. Rey was perhaps small for a six-year-old, but Miramir didn’t mind her daugh­ter’s desire for closeness, knowing the girl would soon grow out of it. Miramir turned and sank gently into the navigator’s seat, still cradling Rey, and kicked the seat around so she was facing Dathan.

“I know it’s dangerous,” said Miramir, “but this ship was in Plutt’s scrap heap for a reason. We’ve managed one long jump, and look what happened. It’ll be worse each time.”

Miramir lowered her face to Rey’s hair, burying her nose in the bru­nette plait, her eyes focused somewhere on the floor.

Dathan knew that look. He’d seen it plenty of times over the last two days. It pained him to see Miramir like this. His wife, his love, the smart­est and most beautiful and best person he had ever met. Certainly the most capable, far better at most things that he was, no matter how hard he tried.

And he knew something else, too.

This was all his fault.

But there would be time for that later. Right now, they were out of options, and only one path was open to them.

“Hey,” said Dathan. He forced the smile back onto his face.

Miramir looked up but didn’t speak.

Miramir looked at him, her big eyes beginning to water.

Miramir looked down at Rey, and —

She laughed. Dathan grinned, then found himself unable to stop himself from joining in.

Rey unravelled herself from her mother’s arms and turned to look at her dad.

“You guys are silly,” she said. And then she pointed at the front view­port. “Who’s that?”

No sooner had the child spoken than an alarm sounded. Dathan toggled a switch to clear it, then turned around to look at what Rey had spotted. The alarm began to sound again.

“What is that?” asked Miramir.

“We’ve got company,” said Dathan, watching as in the distance three stars moved and began growing in size.

Coming right for them.