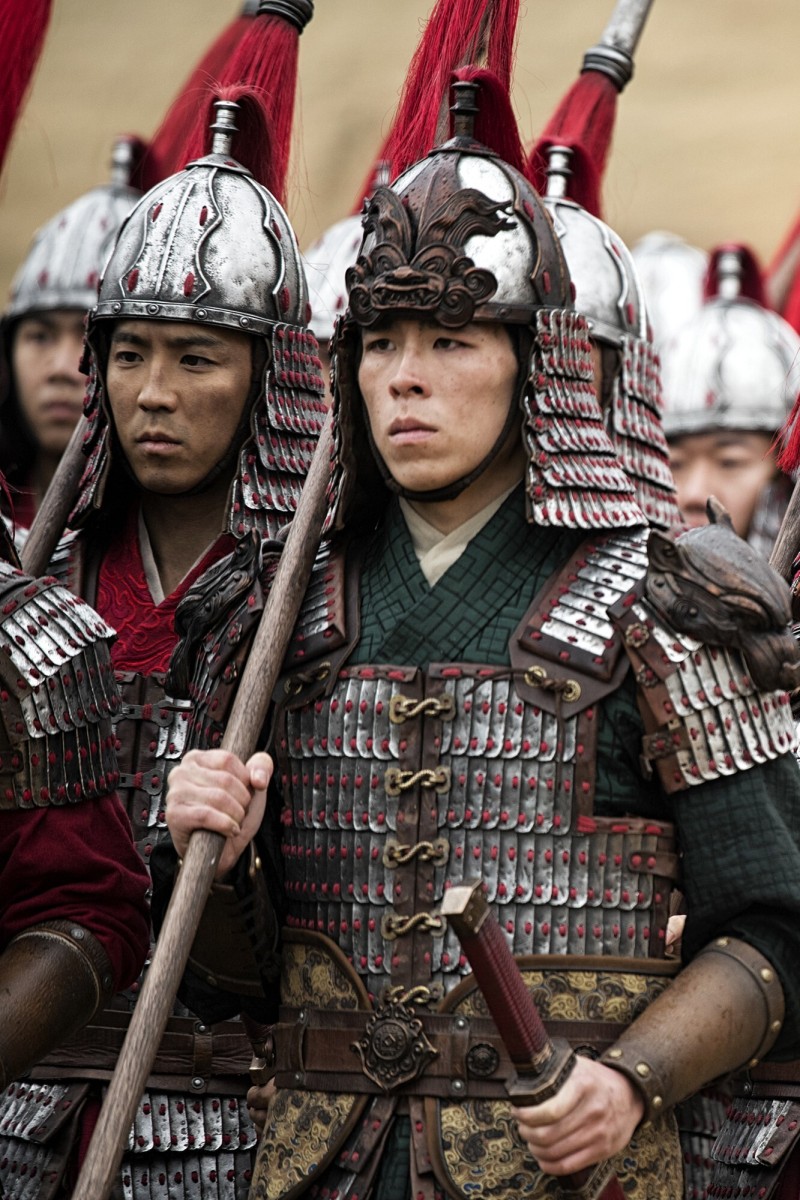 Disney’s ‘Mulan’: How the Xinjiang Uygur camps and actress Liu Yifei’s comments about the HK protests made it one of 2020’s most controversial films 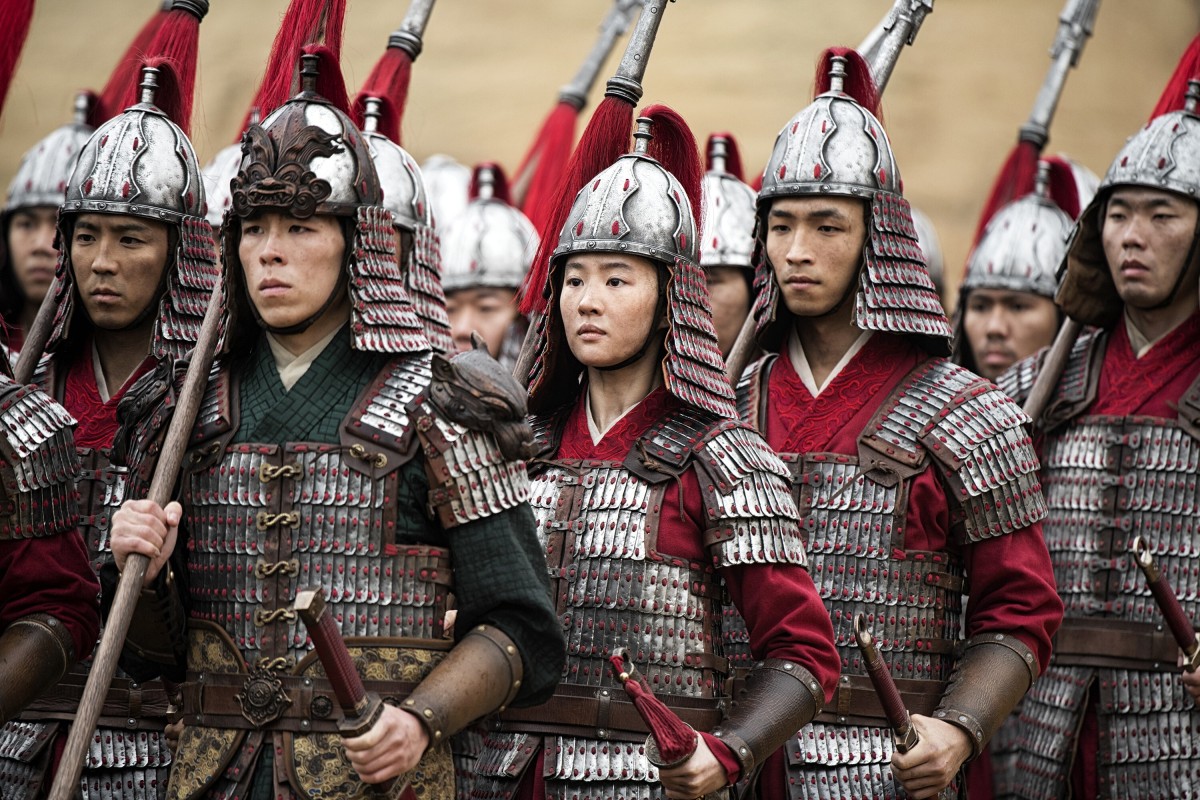 Liu Yifei (centre) stars in the title role in Disney's 'Mulan', which has been mired in controversy.

In theory, a live-action remake of Mulan was an obvious choice for Disney’s next box office blockbuster. The studio has generated billions in ticket sales by rebooting its animated classics for the big screen, and this one had a clear advantage: a massive audience in China.

But the film has became a political flashpoint before its debut in mainland China last weekend, by far the biggest theatrical market for the movie.

Ahead of Mulan’s Disney+ premiere last week in the US, #BoycottMulan trended on social media as activists blasted its Chinese American star Liu Yifei (aka Crystal Liu) for siding with Hong Kong police over pro-democracy protesters last year during a crackdown on demonstrations.

The online uproar escalated this week when it was revealed that Disney filmed part of Mulan in Xinjiang, a region where China is believed to have detained at least 1 million Muslims - mostly ethnic Uygurs - in internment camps.

To critics, the rollout of Mulan marks the latest example of Hollywood’s hypocrisy and willingness to sacrifice values to do business in China.

“In Los Angeles [where Hollywood is], there’s a focus on freedom of expression,” said University of Virginia media studies professor Aynne Kokas, author of the book Hollywood Made in China. “Then we cross borders, and the democracy struggle in Hong Kong is erased, as are the human rights abuses in Xinjiang.”

Republican Senator Josh Hawley pounced on the revelation that Disney, in the end credits for Mulan, gave “special thanks” to government entities including the Publicity Department of CPC Xinjiang Uyghur Autonomy Region Committee. Hawley, who previously criticised the NBA for “kowtowing to Beijing,” on Wednesday published a letter addressed to Disney Chief Executive Bob Chapek, accusing the company of “whitewashing” the “ongoing Uygur genocide.” Republican politicians have frequently attacked Hollywood and China amid the Trump administration’s trade war with Beijing.

“Your decision to put profit over principle, to not just ignore the CCP’s (Chinese Communist Party) genocide and other atrocities but to aid and abet them, is an affront to American values,” Hawley wrote in the letter.

Disney declined to comment for this story and referred The Times to recent remarks by Chief Financial Officer Christine McCarthy.

McCarthy, speaking Thursday at a Bank of America investor conference, suggested that the film’s ties to China were not as significant as people made them out to be but acknowledged that they had created “a lot of issues” for the company.

Mulan was “primarily shot, almost the entirety, in New Zealand,” McCarthy said, adding that the studio filmed scenery in 20 locations in China “in an effort to accurately depict some of the unique landscape and geography of the country.

“(I)t’s also common knowledge in the film industry that ... you acknowledge in the film’s credits the national and local governments that allow you to film there,” she said. “And so, in our credits, it recognised both China as well as locations in New Zealand. And I would just leave it at that, but that’s generated a lot of issues for us.”

The controversy engulfing Mulan – based on a Chinese folktale and Disney’s animated 1998 musical of the same name - highlights the pitfalls that come with making films designed to play in the Middle Kingdom, experts said.

The entertainment industry has long faced scrutiny for self-censoring its movies to avoid the ire of the Chinese government, which tightly regulates what movies play in theatre there. Republican Senator Ted Cruz, blasted the producers of Top Gun: Maverick for removing symbols representing Japan and Taiwan from Tom Cruise’s bomber jacket. DreamWorks Animation’s Abominable, a US-China co-production, took heat in Asian countries for including a map containing the so-called nine-dash line that signifies China’s claim to disputed territory in the South China Sea.

James Tager, a researcher with free-expression advocacy group PEN America, which recently published a report on censorship of Hollywood movies for China, said the Mulan situation is particularly troubling.

“Beijing’s influence over Hollywood goes beyond having blind spots for certain policies,” Tager said. “(This is) arguably more actively sending a message to audiences of, ‘nothing to see here.’”

Disney had every incentive to make the movie work in China. With the Covid-19 pandemic still raging in the US, the studio opted to bypass domestic multiplexes by selling the film digitally for 30 dollars to Disney+ subscribers. China, where Disney+ is not available, is one of the few significant markets where Mulan will screen in cinemas.

It remains to be seen whether political controversy will harm Mulan’s commercial performance. China’s theaters have begun to recover from coronavirus closures, having reopened to healthy numbers for movies including The Eight Hundred, a local production that has generated more than US$370 million dollars so far.

Mulan got off to a slow start, grossing US$6 million in China on Friday, with analysts including Rance Pow of film consultancy Artisan Gateway predicting a soft $30 million opening weekend. In another hurdle, Reuters reported this week that Chinese authorities had ordered major local news outlets to not cover the release.

Disney collaborated with Chinese cultural consultants to ensure Mulan was authentic for the audience there, and the film features popular Asian stars such as Gong Li and Donnie Yen.

However, online audience reviews in China have been lukewarm. The film scored only 4.7/10 on Douban, a popular Chinese movie rating site. Many users criticised the film’s handling of feminism and its portrayal of Chinese culture.

“The shell was Chinese but the soul was still foreign,” wrote one user. “It was a foreign, superficial understanding of China.”

A review published on the magazine Southern Metropolis Weekly’s WeChat criticised the film for missing the heart of the original Ballad of Mulan: not a glorification of patriotism and filial piety, but a story of one woman’s courage amid a cruel imperial system that conscripted the frail and elderly and placed little value on regular people’s lives.

“The background story of Mulan is that she wanted to take her father’s place, protect her family and defend the people. But the film turned Hua Mulan into a palace guard protecting the emperor,” the review said. “The people that Hua Mulan wanted to defend became the background.”

Even if the political situation doesn’t harm ticket sales for Mulan, it could do damage to Disney’s brand, said Michael Berry, director of the UCLA Center for Chinese Studies.

“Disney prides itself on its image as a wholesome, family-friendly entertainment company ... yet now they find themselves associated with murky political controversies and alleged complicity with human right abuses,” Berry said. “The fact that Mulan is a film that touts lofty values like honour, bravery and loyalty further heightens this tension.”

Mulan has been praised by US reviewers as a major milestone for representation of Asians on the big screen and women behind the camera. The picture is a rare example of a big-budget blockbuster directed by a woman (New Zealand filmmaker Niki Caro helmed Mulan for Disney). According to Rotten Tomatoes, 75 per cent of critics’ reviews were positive.

The film’s achievements, though, were overshadowed when sharp-eyed viewers watching the movie on Disney+ noticed the names of the government entities listed in the film’s end credits. The Turpan public security bureau, which Disney thanked in its credits, is on the US Commerce Department’s sanctions list for participating in mass arbitrary detention of Uygurs and other native ethnic people in the northwestern Xinjiang region. Several propaganda departments that have denied such mass detention are also in Disney’s credits.

According to research by the Australian Strategic Policy Institute, a think tank, there are at least 14 detention camps run by the Turpan public security bureau, based on satellite imagery of the detention centres, some official documentation and some visits by journalists to the actual facilities.

The Chinese government calls such camps “reeducation” and “vocational training” centres, but Uygur, Kazakh and other minority survivors of the camps and their families say they are akin to prisons where they are mistreated and subject to coercive ideological “training.”

Even if they did not see the camps, Disney’s film crew could not have missed signs that Xinjiang was not a “normal” film location in 2018, said Timothy Grose, a Xinjiang expert and professor of China Studies at the Rose-Hulman Institute of Technology in Indiana.

“High-tech security cameras were already ubiquitous, face scanners were likely used in their hotel check-in process, security checkpoints were stopping traffic entering and exiting Urumqi and were placed at every major exit in Pichan,” he said, using the Uighur name for a county in Turpan. “Mosques would have been nearly vacant, and there would have almost certainly been an observable absence of adult men.”

Rayhan Asat, a Uygur graduate of Harvard Law School whose brother Ekpar Asat disappeared in 2016 after visiting the United States on a State Department-sponsored programme and then was sentenced to 15 years in prison for “inciting ethnic hatred,” questioned whether Disney had done adequate human rights due diligence before filming.

“As a sister of a concentration camp victim, a woman and an attorney, I believe in female empowerment. But when I saw that they partnered with these Xinjiang agencies, I felt they were reducing Mulan from a symbol of female strength to an endorsement of female oppression,” Asat said, pointing to multiple reports of forced sterilisation of Uygurs and other ethnic minority women within the concentration camps. “I am boycotting this film.”

Omer Kanat, executive director of the Washington-based Uyghur Human Rights Project, said Disney was papering over crimes against humanity rather than advancing its goal to uplift and inspire.

“We Uygurs are suffering a living nightmare throughout our homeland, and now it turns out Disney was working with the police there,” Kanat said. “Disney needs to contact the Uygur diaspora, apologise and make amends.”

The rise of the #BoycottMulan backlash on Twitter, which is blocked in China, prompted Chinese state media to respond by using its own #SupportMulan hashtag, with the state-run Global Times labelling detractors as “ideological paranoids.”

Supporters of activists in Hong Kong have continued to use Mulan as a political symbol. Last month, social media users hailed Agnes Chow, one of Hong Kong’s best-known pro-democracy activists, as the “real Mulan” after police arrested her for allegedly violating the region’s new national security law meant to clamp down on what it considers to be sedition. Advocates made Mulan memes supporting Chow.

Berry said Liu, who was born in China and is a naturalised American citizen, was in a tough position of having to appease two cultures with clashing priorities. Stars in China often are called to participate in political movements in support of the government, he said.

“What we are seeing is the unintended consequences of a star struggling to balance - or perhaps caught between - the opposing poles of ‘political correctness’ as defined by each culture,” he said.