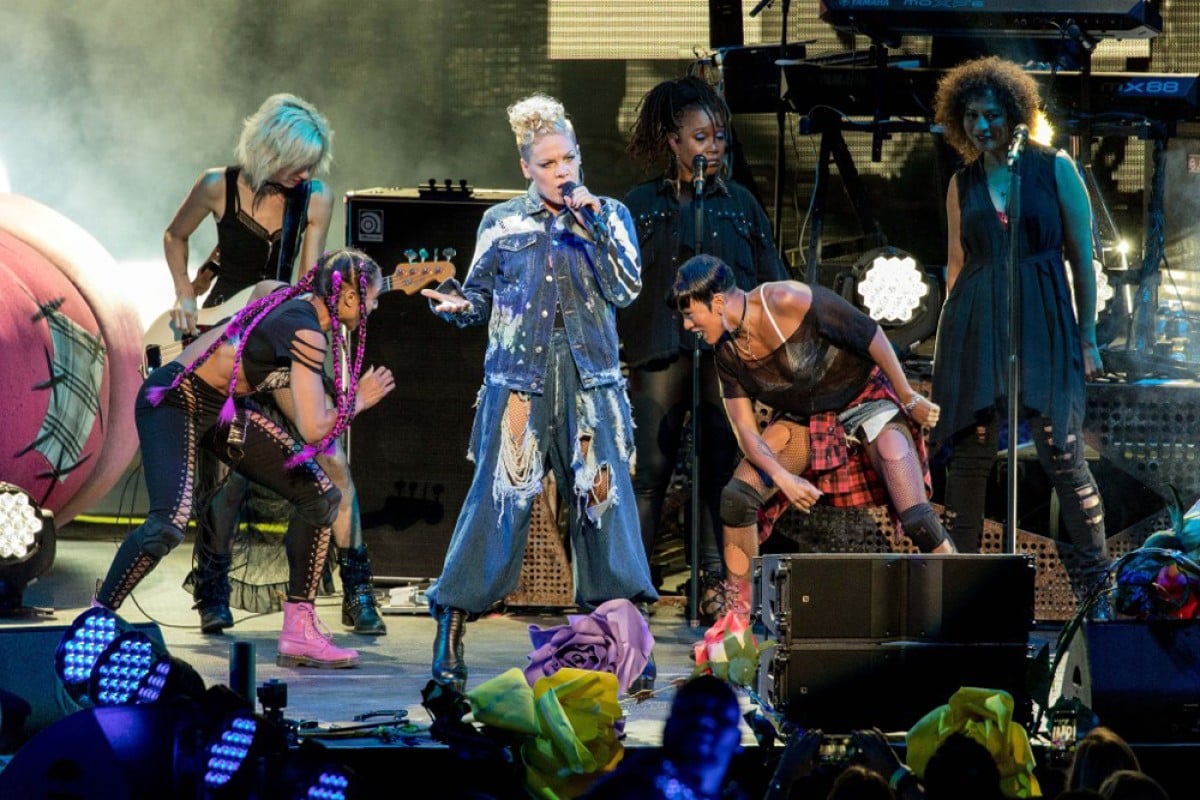 Pink is back with an emotional, diverse, and political album.

After five long years, Pink is finally releasing a new album. Following the international success of The Truth About love (2012), the singer-songwriter (real name Alecia Moore) returns with Beautiful Trauma, featuring What About Us, the single she performed as part of her medley at this year's MTV Video Music Awards where she was awarded the Michael Jackson Video Vanguard Award. (YouTube her acceptance speech, it's beautiful.)

Every album is a capsule of the artist's life at that point and Pink's seventh studio album is no exception. This time, the music speaks to what matters to her most right now: her marriage, children, lessons learned, challenges overcome, and the state of politics and gender equality. Frankly, it is a refreshing body of work in the current landscape of music about the honeymoon stages of a new romance, sex and bling, and not-so-subtle nods at feuds between artists. (The only exception is that this album comes with its own short documentary on Apple Music titled On the Record.)

Whatever You Want is a love letter to husband, Carey Hart; as is You Get My Love, a heartfelt ballad that has only a simple piano score to accompany Pink's powerful vocals confessing to being a difficult person to love. Revenge (featuring Eminem, which would be the third time the pair has collaborated) is a fun and vicious track that came about because, singer jokingly says, "I decided I wanted my first rap Grammy." While you'd never want to be in the type of relationship depicted in this track, it's addictive and distinctively stamped with Pink's brand of humour - simultaneously self-deprecating and silly.

As with all her previous albums, Beautiful Trauma is a mixed bag of emotions, so there are also gorgeous tracks that make your heart swell. But We Lost It speaks to the period in her relationship with Hart when both were too young and stubborn to make a good thing work, even when the love and passion were there. Where We Go is a soaring, carefree tribute to her current family life: a home that's a "safe, warm, yummy place." (VH1's Behind the Music - Pink)

Then there are the activist songs. The singer has said she likes to let her listeners decide what a song is about but for her, What About Us is on how governments around the world have failed their people. Considering Pink has always been an outspoken artist whose song Dear Mr President from her I'm Not Dead (2006) album is a direct criticism of George W. Bush, it's not hard to decipher what prompted her to write What About Us.

Then there is the beautiful and empowering Wild Hearts Can't Be Broken. The lyrics, "This is my rally cry/I know it's hard, we have to try/This is a battle I must win/To want my share is not a sin", were originally written for the 2015 film Suffragette about the fight for women to have the vote in early twentieth century Britain. It's a sad coincidence that the sentiments are still so applicable now.

Objectively, is this her best album? No, it's not. It's a great album, but there are definitely a couple of completely forgettable numbers. (I don't remember which ones.) However, the majority of songs each pack a punch and is everything fans didn't know they were waiting for.

Subjectively, I'm a massive Pink fan, and I love this album for what it is: a great collection of emotions and messages that resonate with me. For example, Barbies, a sentimental tribute to the days of our childhood when things were so much simpler, and the exuberant I Am Here, an auto-biographical song about getting to where she is now after a tumultuous childhood and young adulthood, just gets me.

Some days you do wish you could go back to a time when nothing weighed heavy on your heart, other days you want to celebrate all the hardships you've weathered and the person you are today. I also love how a gospel choir from Philadelphia is incorporated into I Am Here, an apt tribute from the singer who used to sing in such a choir herself "back in the day." (On the Record)

Lyrically, her signature play on words, syllables and rhythm are all there, as is her sense of humour and conviction. She also experiements with new vocal techniques that are distinctive, like on wistful and poppy For Now, but  it won't be everyone's cup of tea.

You don't lay low for five years and come back with a brand new album that debuts at No.1 in 54 countries upon release if you do not evolve. Beautiful Trauma isn't a replica of the attitudes from her previous albums because as Pink moves through life her attitude changes. (Coz, you know, people grow up.)

This seventh album reflects the attitude of a woman who've had the highest highs and lowest lows in the beautiful but traumatic thing we call life. Those who will appreicate this album most are those who've loved and lost, been knocked down and carried on. Pink's music is magnetic not because of the devil-may-care attitude that shot her to fame, but because of her honesty in telling her truth. And for those who've been battered about by life but are still soldiering on, Pink's Beautiful Trauma continues to strike a cord that rings true.