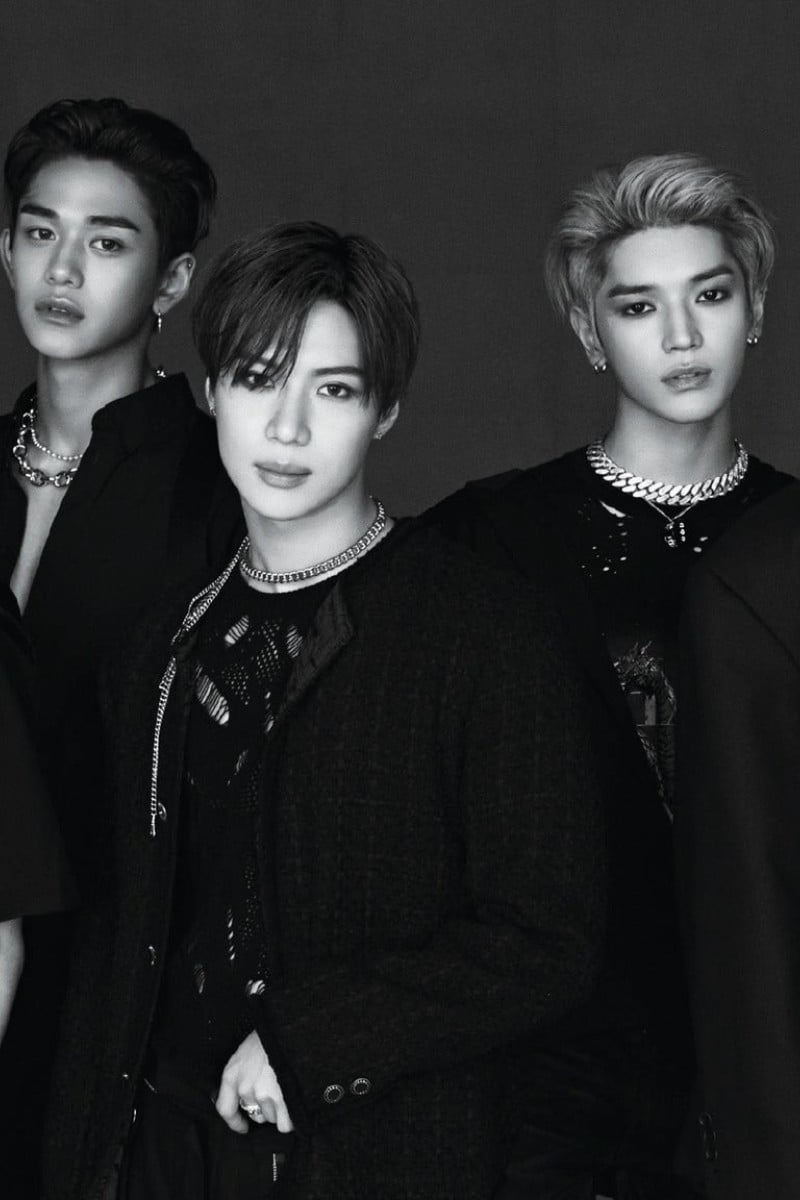 A supergroup made of K-pop veterans from EXO and SHINee, SuperM transcends fandoms, musical genres, and geographical boundaries. 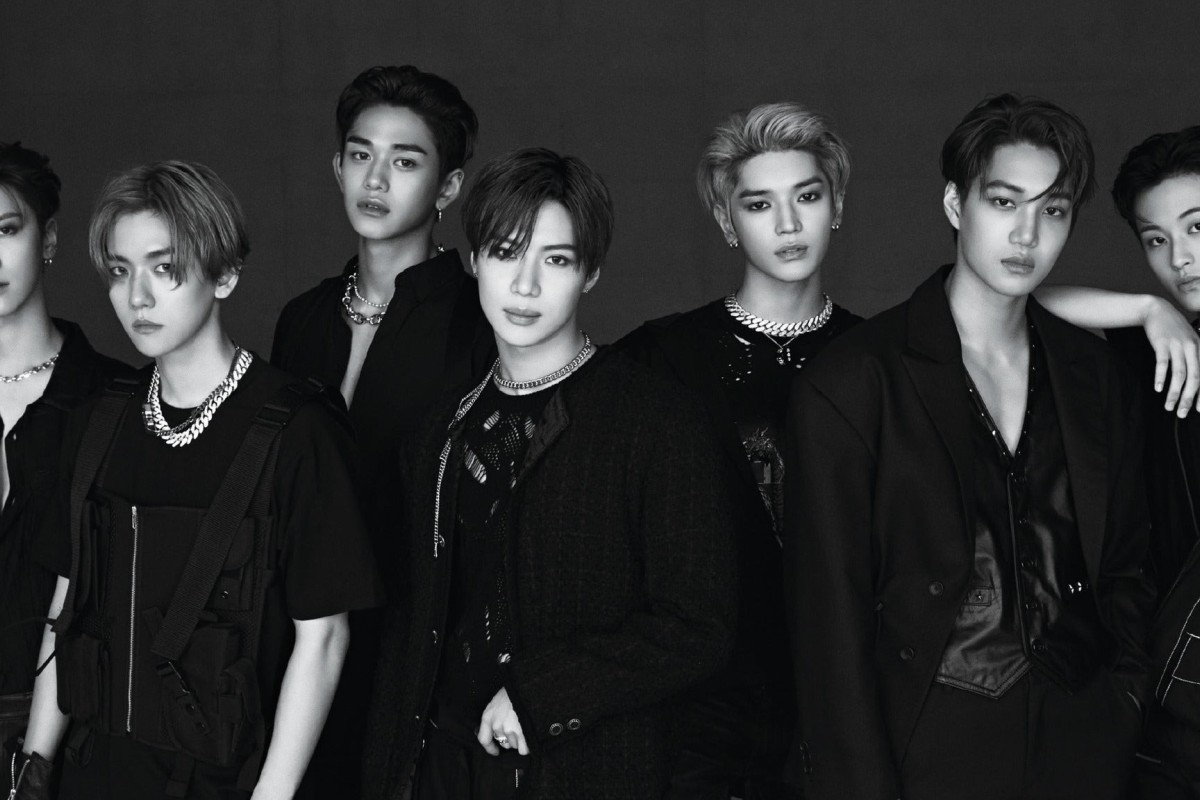 Seven hours before the K-pop band SuperM took the stage for their sold-out show at the Forum arena is Los Angeles two weeks ago, crowds were already packed outside the venue. The unseasonably hot weather sent sweat down fans’ faces and dampened their clothes – all SuperM merch, naturally.

No one needed to be there so early. But thousands of K-pop stans had waited months for this day, when an all-new supergroup of South Korea’s biggest pop stars would arrive in the city as part of a US and worldwide arena tour.

The boys were just steps away, in fact, in a windowless backstage green room. There, SuperM’s Taemin, Kai, Baekhyun, Mark, Ten and Lucas, all in their early to mid-20s, kicked back on a gigantic couch, dressed in Balenciaga sweatshirts and bomber jackets. Their green, blue and bleach-blond hair fell over skin so flawless it looked like they’d had Instagram filters implanted.

Taeyong, the seventh, was a bit worse for wear, clutching his stomach in agony from an unspecified illness. He powered through the shivering to silently nod hello to a reporter, before beelining back to the dressing room to recover. Still, the band felt prepared for the night.

All About Luv review: K-pop band Monsta X makes us love them more

“I was really nervous when I first went on that stage, I actually didn’t have too much confidence,” Lucas said, about the band’s first-ever live show outside the offices of their US label Capitol back in October (all members but Mark used a translator for English interviews). “A lot of the nervousness came from the fact that I really wanted to put my best foot forward. But now, I can definitely say I feel more confident about where I am.”

The Avengers of K-pop

Super M has only been a group for six months, but they were as sure-fire an idea as any in pop. Its members had been K-pop stars for nearly their whole lives, in the groundbreaking groups EXO, SHINee, NCT127 and WayV. In the wake of BTS’ rout of the US pop charts and stadiums, SuperM is already tipped as the next phenomenon in K-pop, with four popular bands’ fan bases built in, and both Capitol and SM Entertainment, the most storied label in K-pop, behind them.

In October, the band set a record for debut week sales by a K-pop act, and topped the Billboard 200 album charts with their self-titled EP.

But they’ve also endured tragedy, including the 2017 death of Jonghyun, Taemin’s bandmate in SHINee. The men face the all-consuming demands of K-pop celebrity and an industry going through a time of profound self-reflection and change.

As they limbered up for this set – maybe the biggest show of their young careers in this band – they knew the stakes.

“This is basically like the re-debut for a lot of us,” Kai said. “There is some of that pressure and that expectation on us, because there was a kind of shock value to this group. This is going to be a different kind of stage.”

SuperM's members are all K-pop veterans, having first found fame with other successful acts like EXO, SHINee, NCT127 and WayV.
Photo: Handout

In K-pop, it’s common for bands to be modular. Groups often have subunits or spin-offs to appeal to different markets. It’s especially helpful for boy bands, where superstardom is no protection from compulsory military service in South Korea, and acts can be reconfigured to keep stars on the road.

But nothing like SuperM has happened in the genre before, where stand-out members of already superfamous bands joined forces. Think “the Avengers of K-pop” or an Olympic basketball “Dream Team”, with seven-part harmonies and two-hour sets of impeccable choreography.

Even though all the members are in their 20s, in the ultra-compressed world of K-pop, SuperM is intergenerational. “I used to listen to SHINee before I even came to the label to train,” Mark, 20, said, looking over admiringly at his bandmate Taemin, 26. “To have our voices be harmonised together, and to be able to see him as a guy I know, as a friend, that changes the way I listen to his music or see his performance.”

Being in the new band was also a chance to break out of the established roles in their main acts. “In EXO, I’m one of the youngest, but here I’m one of the oldest and that’s a really fun dynamic,” Kai, 26, said. “When I look at Lucas, I remember back when I first debuted and that makes me feel young again, like ‘Oh, I remember when I was like that too’.”

“Men get more attractive as they get older, so it’s kind of better to debut later,” 21-year-old Lucas joked, ribbing his bandmate in return.

Cracking the US market

SuperM isn’t diluted for Western tastes. But they are particularly rangy for K-pop: At their Forum show, Taemin, one of the older members and a K-pop veteran since 2008, sang pristine R&B on Goodbye. Kai’s trap-influenced Confession was the raciest number, with flashes of his abs that sent fans into meltdown.

“The genre as a whole is exploding over here,” said Tarynn Law, 27, who works at a music tech firm in Malibu and paid US$175 for a floor seat at the Forum show. “Artists like Taemin and EXO haven’t toured here in quite some time or, in WayV’s case, at all, which makes SuperM’s love for the States pretty special for a lot of fans, too.”

SuperM's Los Angeles show was the first stop on a country-wide arena tour. With a sound that pushes both K-pop and Western musical boundaries, SuperM are well positioned to take on both markets.
Photo: TNS

The group’s new material – the purring melodic bounce of No Manners and the hard-pivoting EDM of Jopping (a goofy merging of “jumping” and “popping”) – show an ear for K-pop sounds that can translate not just globally, but specifically to US crowds.

“I personally think that this group itself is not really westernised or altered at all for any type of market,” said Baekhyun. But he agrees that their sound challenges both K-pop and Western styles. “To be honest, when I first heard the song Jopping, I thought it sounded a little bit too different. But now when I see the US or the international fans’ reaction, it really made an impression on them.”

SF9 First Collections review: All the makings of a K-pop classic

After helping to push NCT127 to the top tier of K-pop acts in the US, Capitol sees SuperM as both the most promising new bet in K-pop today, and the start of a deeper relationship with the Korean label SM Entertainment and its founder Lee Soo-Man, at 67 a titanic figure in South Korean business and culture.

Indeed, Mr. Lee, who hand-picked the members of SuperM, was at the Forum show, and when the camera panned to him in his suite, he was cheered as loudly as any star on stage. Given BTS’ Saturday Night Live and Grammy performances, Blackpink’s knockout set at Coachella last year and the reunion of veteran act BigBang this year at the same fest, the genre and its figureheads have never been more visible in the US

Positive changes in the industry

But the squeaky-clean scene has, over the last few years, faced many of the same issues about overwork, toxic fan culture, sexism and mental health that the wider entertainment industry has dealt with. Last year, K-pop was shaken by the deaths of two female stars, Goo Hara and Sulli, that thrust those long-simmering issues to the forefront.

Taemin knows that sense of tragedy better than anyone. As a founding member of SHINee, he was devastated by the suicide of his bandmate Jonghyun in 2017. The loss shook K-pop as a whole, including all the members of SuperM. But Taemin lost a bandmate and close friend. He still struggles o speak about it, and when the topic came up, a Capitol rep encouraged him to be as honest as he felt comfortable with. He wanted to keep the personal pain of that loss private, he said, but acknowledged that speaking out on mental health issues in K-pop is the only way to effect change.

The death of Jonghyun, Taemin’s bandmate in SHINee, in 2017, and the deaths of two female K-pop stars last year, have forced the industry to reflect on its treatment of young stars.
Photo: AFP

“When it comes to celebrities, it’s always kind of a double-edged sword. They’re loved by so many, but at the same time, they’re in the spotlight and everything they do is analysed or scrutinised by so many people,” Taemin said. “But the industry is definitely changing for the better.”

In a few hours, they would walk out to a packed arena and show fans what K-pop is capable of. For two hours, they demonstrated the talent, musical range and physical craft that goes into a set pushing the peak of a genre. As a cultural phenomenon, K-pop has nothing left to prove in America any more. Now it’s up to its acts to show what’s possible within it.

“It’s really encouraging to see how we can all bridge the gap, and everyone can just be part of a global music scene,” Kai said. “This shows us that K-pop is not just for K-pop fans any more.”