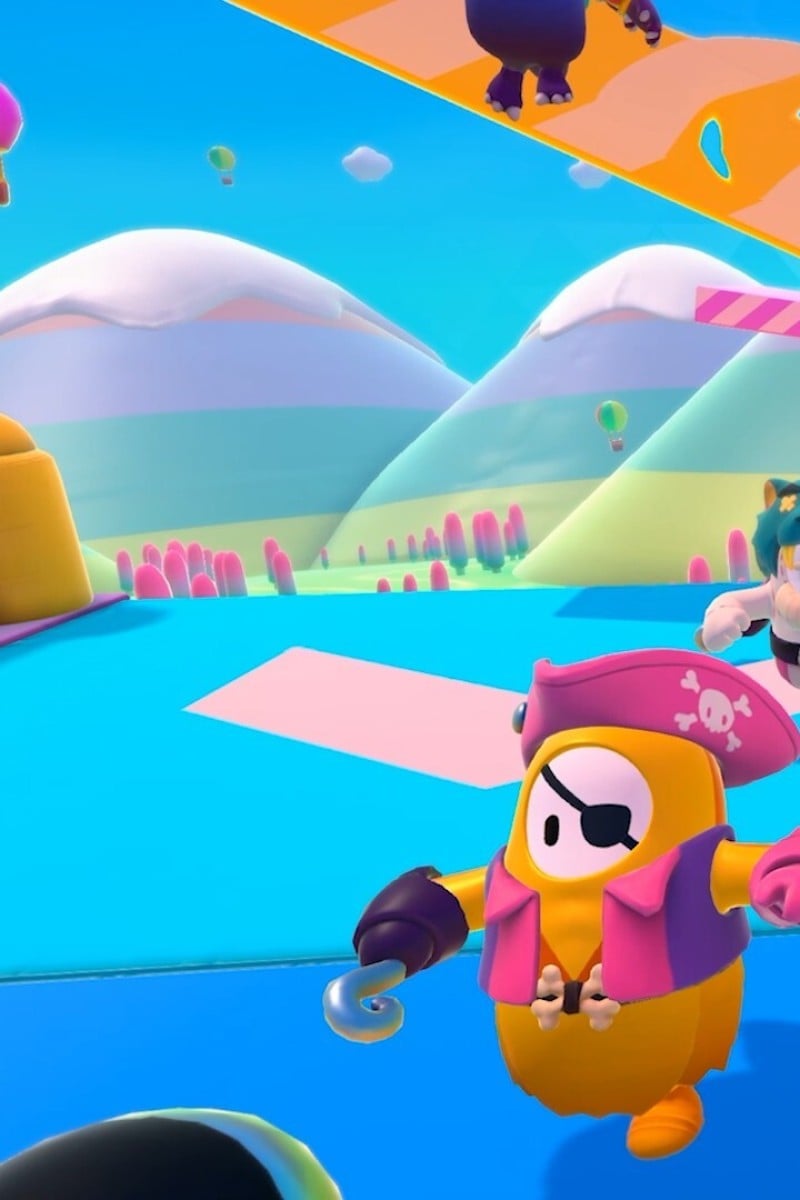 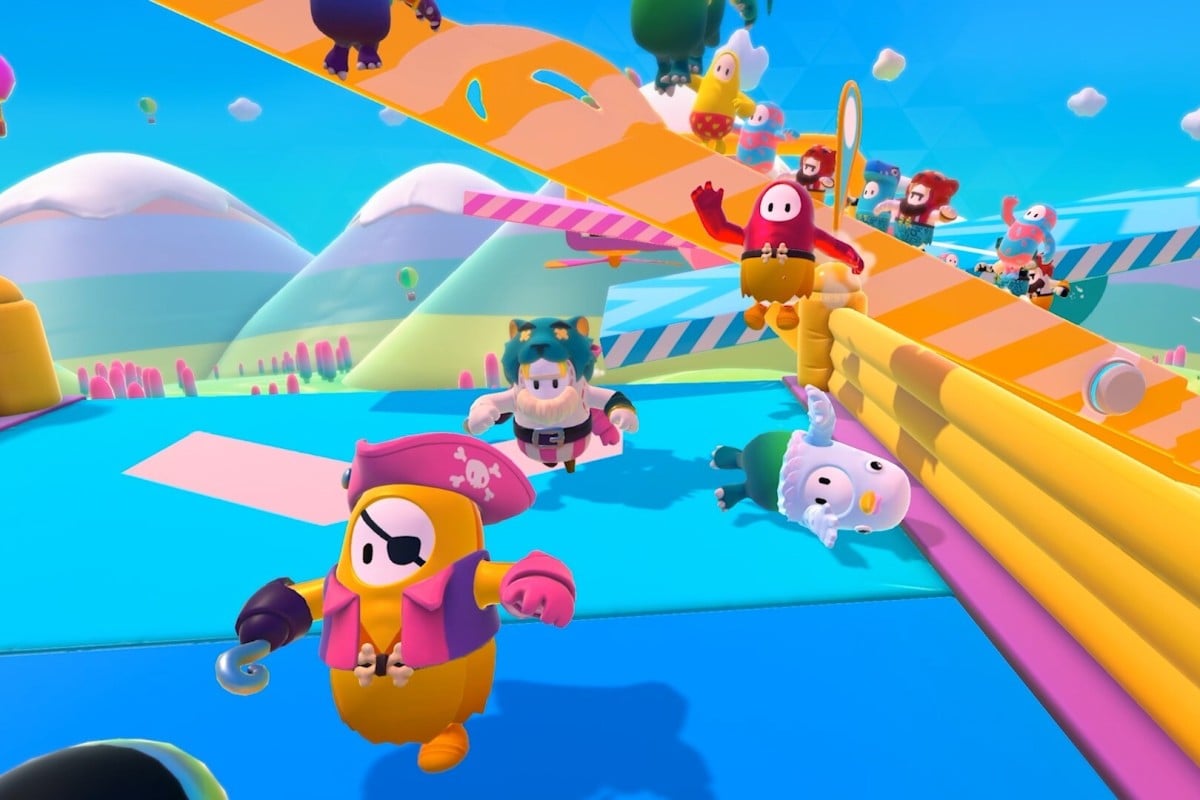 How was the egg stage made in 'Fall Guys: Ultimate Knockout'?

Its style is as inviting and as brightly lavish as a candy table at a banquet, and its bite-size, mini-game philosophy makes it difficult to stop after a single round. The charm of its addictive ability to merge competition with approachability has made Fall Guys the unexpected multiplayer breakout game of 2020 – more than 10 million copies on PC have sold since its August release and it’s the most downloaded game ever on the PlayStation Plus service subscription service.

The titular Fall Guys – jelly bean-meets-Teletubby-meets-Care Bear-like figures – will wobble, hobble and, of course, fall through bouncy obstacle courses inspired by over-the-top, cult-favourite game shows such as It’s a Knockout. While losing can frustrate, especially when your Fall Guy is close to the finish line of a bubblegum-toned course filled with ramps, seesaws or breakaway doors and is suddenly batted away by a giant spinning hammer, the game still manages to possess a silly, innocent charm.

For the player, its objectives are instantly recognisable on visuals alone – run here, avoid that, steal a tail. Victory goes to the last Fall Guy standing. But this requires surviving a series of courses – or mini-games, each never lasting more than a couple minutes – by racing to a finish, solving simple memory exercises or competing in unpredictably zany team matches.

With more courses and game options landing October 8, we rang up Fall Guys level designer Megan Ralph to chat about how a Fall Guys course is created. Ralph walked us through a start-to-finish look at how the team arrived at one of her favourite levels, the Egg Scramble, a team-based contest in which each group tries to corral the most eggs. Our first lesson: While Fall Guys has become popular because it’s incredibly simple to play, creating a simple game is no simple task.

And besides, Egg Scramble is dear to Ralph’s heart. It was the first level she made for the game.

Also, bunnies were once involved.

Fall Guys at one point didn’t have any team games, and creating one was an initial assignment given to Ralph. Like all “Fall Guys” courses, player objectives had to be readily clear, so Ralph came up with the core gameplay concept – “fetching and stealing.”

With the understanding that the geometry of the level had “to be intuitive,” Ralph came up with the triangular vision for Egg Scramble.

In the mini-game, there is a nest of eggs in the centre of the course, and each team has to collect as many as possible, all while defending their basket-like base and stealing from others. This design, slanted toward the centre nest, allowed each team to have an equal amount of running space to the nest, and should an egg be dropped on the way to a team’s base it would gradually make its way back to the central nest.

Fall Guys at this point didn’t have any props. While one course gave players tails and the ability to steal the tails of others, Ralph believed that creating some sort of prop – an egg in this case – and asking the players to fish for them from a central point would make it easy to keep score.

It also allowed her to create a mini-game where the player’s focus can constantly shift.

Does one centre on rounding up loose eggs? Or does one concentrate on stealing the eggs of other teams? Or instead, does one act as a guard to keep others out?

“I really wanted to focus on switching gameplay midway through the round,” says Ralph.

“Everyone is taking eggs out of the central nest for the first half, but in the middle everyone runs out of eggs and they have to steal from other people,” she says. “I liked that switch.”

“Now when you watch people play that happens immediately, but when we were testing it there was a defined set of two sections to the level where people would get the eggs and then there would be a tussle. I enjoy that element as it encouraged a bit more interaction between the players and the teams.”

Once Ralph feels she has a good handle on a level she’ll write up a single-page pitch. The document will lay out the game mechanics, providing a coder with a sense of how the level will play out, and also include a list of art assets that would be needed. This is shown to the teams in charge of various Fall Guys principles.

“We get a programmer and an artist who document,” Ralph says, “and they give it a thumbs-up and say it’s doable or that we don’t have time for this.”

But even when Mediatonic opted to go ahead with Egg Scramble, there were many questions left to solve. In an early 3-D mock-up of the level, back when the game had 100 Fall Guys rather than 60, the grey area in the centre was left open because it was unclear at this point in development where the camera would be placed. Preliminary iterations, in fact, had cameras that would remain stationary with the nest of the player’s team centred, as opposed to the roaming, floating ones that are in the final product.

'Fall Guys' Season 2 will have a medieval theme.

One discarded idea was that an egg would disappear when dropped and essentially respawn in the centre of the map. Anyone who has played Fall Guys knows that dropping an egg isn’t an “if” but an inevitability, and there’s a delicate balance between challenging and downright frustrating the player.

Other problems came to the fore in trying to simplify the design process. One solution that became clear: the free-roaming camera.

It also changed the whole game: “If we wanted to encourage stealing or a shift in gameplay, we had to do something about this, as the fixed camera is focused on (protecting) your base.”

Some things in Fall Guys are completely random. When a breakaway door in a course is busted through, for instance, those foam-like constructions go bouncing every which way. The eggs, however, required more specificity and control to make the level a success.

“We networked all those eggs, which means we put things on the eggs so the servers know where they are at all times,” says Ralph. “That was a nightmare. Every few months the tech team would come back and say, ‘Can we reduce the egg number?’ I think we ended up with around 40 eggs, but we were very ambitious.”

For most of the Fall Guys courses, it doesn’t really matter in which way objects go flying. In fact, that’s part of the charm and it adds to the unpredictability. But having hundreds of eggs for the Scramble was too much of a technical hurdle. Often more than one player attempts to grab an egg at the same time, meaning everything needs to be precise across multiple connections.

“If you drop an egg and someone else grabs it, that has be very accurate on people’s machines,” Ralph says. “So it’s constantly sending messages back and forth to the server. Otherwise, the eggs would look like they’re in different places on everyone’s screen, and that was very difficult.”

That was a key lesson. While the number of eggs was in flux until late in this level’s development, going forward, Ralph says, the tech team was brought into level design conversations significantly earlier. “We had these discussions around the eggs a tiny bit late,” Ralph says.

Then there’s the colour of the eggs. In the final game, the eggs look like regular white eggs. But since Fall Guys is an explosion of pastel colors, the team initially thought the eggs should be as flamboyant and dramatic as the rest of the game. Bad idea.

“They clashed too much,” Ralph says. “Plus, some of those were team colours, like pink or blue. So they would get lost. Or they would give a team an advantage. We thought we could do different eggs for different teams and we had to rule that out. They weren’t readable, and there was too much visual noise if you tried to create individual eggs.”

Spelunky 2 review: Die to lava, spikes and more on the PS4 and PC

The added bonus of making the eggs plain was that the rare “golden” eggs, which are worth more points, stand out.

A level design and early test could usually get up and running within two or three weeks, sometimes longer for the complicated race arenas. “It’s probably about a month of level design time to get the layout designed and approved, and then the artist will take it and do their magic,” says Ralph. “That’s usually an additional probably three weeks. It’s not very long. We can get levels done in two, three months.”

The key, says Ralph, is to keep moving forward even while designs are being worked out.

“I’ve always found if you don’t keep that tight, and keep a record of changes, and get people to justify why you want things changed,” she says, “you go around in circles.”