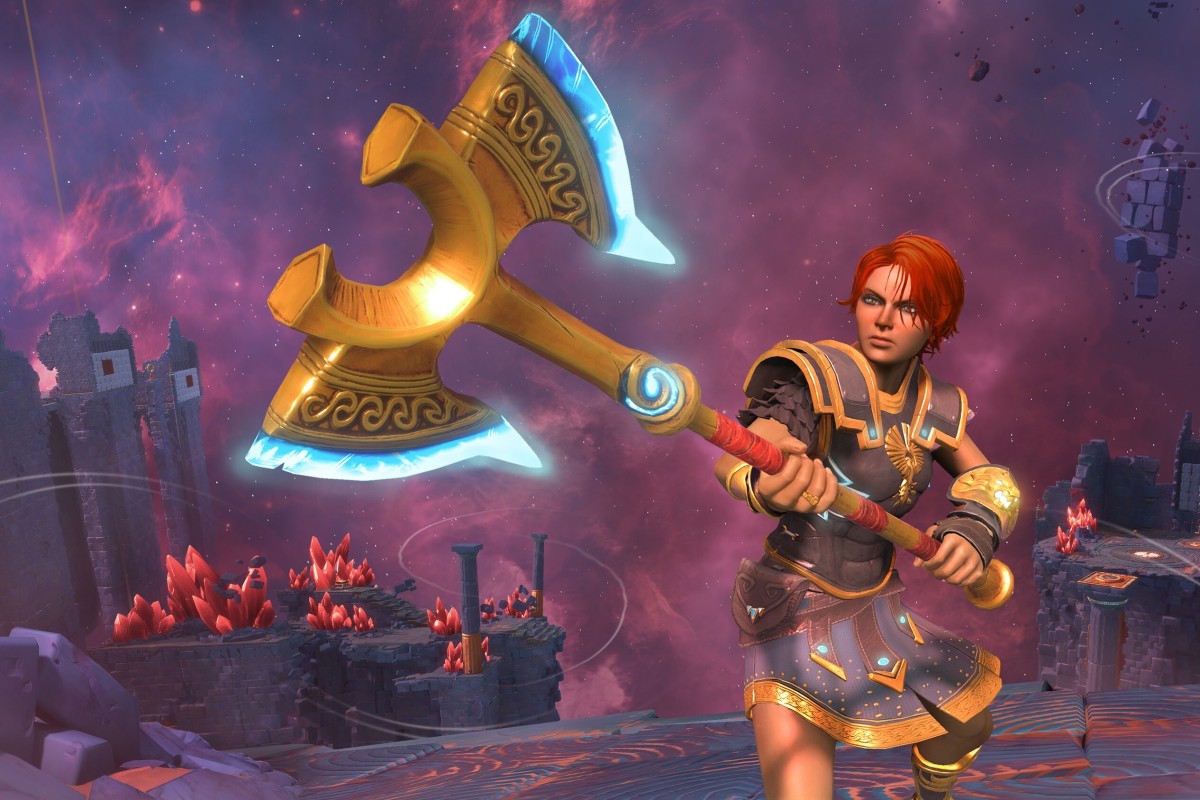 There are plenty of weapons to choose from in Immortals Fenyx Rising. Photo: Ubisoft/TNS

Developers know a winning formula when they see one, and it doesn’t take long before companies create their own version of a groundbreaking game.

The Legend of Zelda: Breath of the Wild rewrote how action-adventure games could be made, with a vast world and deep engaging puzzles that were based on physics and immersive simulations. Nintendo created a universe of problems and gave players the tools to solve them.

Ubisoft took note and created Immortals Fenyx Rising. It’s a project in the same mould as Breath of the Wild but it takes to heart only part of that experience – mainly the exploration, puzzles and combat – and builds a reasonably good adventure out of it.

Immortals follows the title character, a male or female protagonist that players create, and takes the Greek hero on a grand quest to save allies who have been turned to stone. Fenyx faces Typhon, a powerful titan once imprisoned in Tartarus who manages to escape and lay waste to the mythological gods. He robs the essences of Aphrodite, Ares, Hephaistos and Athena, turning them into other beings, while corrupting the heroes sent to stop him.

Most of the campaign is spent trying to restore everyone across the lands of the Golden Isle. It’s the type of locale that apes what’s found in Breath of the Wild. It’s filled with mountains, meadows and massive fissures cratered with caves. It’s a world that begs to be explored, but it’s missing one important element: people. Remember, they’ve all been turned to stone and it creates a vast emptiness amid a pretty facade.

Hyrule Warriors: Age of Calamity is a nostalgic beat-’em’up game

Ubisoft Quebec tries to fill the void with narration. Similar to Bastion, Fenyx’s adventure has running commentary courtesy of Zeus and Prometheus. The titan God of Fire chronicles the hero’s exploits, and Zeus snidely interrupts. The two are like sportscasters who hate each other’s guts.

The banter between the two injects personality into the game, but the humour is hit and miss. At times, it can leave players rollicking but most of the time it’s a bit bland with tidbits of Greek mythology thrown in. (If you’ve studied any classical history, though, you’ll eat up the references and asides.)

The better stories come from the weakened gods, as they each have their own dramas that led to their defeat and transformation. As you help them out, they gain the gods’ blessings, which are useful perks, and you also learn more of the backstories, which revolve around Zeus in one form or another.

4 amazing games to play this month

At the beginning, Fenyx starts off weak. Their attacks are limited and they can only jump a few feet before plummeting to Earth. Thankfully, as players progress in the campaign, Fenyx quickly grows stronger as their abilities expand.

For example, they gain a double jump courtesy of the Daedalus wings and powering up that tool, they’ll be upgraded to a glide.

Each new ability helps them with the over-world puzzles and dungeons called Vaults of Tartaros.

Unfortunately, the free-form nature will sometimes leave you encountering an area that needs a specific ability. The game lets you know if you lack a specific skill, but regardless, it’s important to power up Fenyx early on with Coins of Charon. These can be obtained through mythical quests, frescoes or enormous puzzle installations scattered through the world.

It takes time to learn the language of the puzzles. Fortunately, the game does a decent job of making players fluent, guiding them through the key moves used to solve basic puzzles before moving on to more advanced works.

Many involve switches, shooting targets with the bow and arrow, and using Herakles’ bracers to push and pull objects. There are also new twists like floating blocks, shifting winds and other obstacles.

You won’t encounter as many brain-busters as in Breath of the Wild, but the more challenging puzzles will require you to perform pinpoint platforming, or other tasks demanding precise execution.

In terms of progression, Fenyx powers up fast. If you thoroughly run through Vaults and other puzzles, by mid-game, the adventure becomes easy. You’ll have gathered enough swords, axes, helmets, bows and armour that you can customise Fenyx to your playstyle, and each piece of equipment has a stat boost that can be upgraded with adamantine shards.

Stamina items and the Hammer of Hephaistos are particularly useful. Stamina is vital because it lets Fenyx use their most powerful moves, and it’s also required for traversal. Climbing, swimming and gliding all use stamina.

You can extend that meter by gathering Zeus’ Lightning Bolts or by using potions. The drinkable power-ups are plentiful as long as players craft them in advance, and it makes the more challenging encounters painless.

Although the combat eases up as Fenyx grows more powerful, it still requires skill and thoughtful use of powers. Airborne adversaries like harpies will require arrows or Herakles’ bracer abilities that whip Fenyx to their foes for air attacks.

You can combine that with a Hephaistos hammer-blow and continue the skirmish by dodging attacks, which happens to freeze time, so that Fenyx can deal more damage to enemies.

Addictive (and free!) games to play if you’re stuck at home

As the combo extends, Fenyx’s attacks can grow more powerful, and it rewards skilled players. The fighting is one of the game’s few improvements over Breath of the Wild.

Immortals Fenyx Rising is a noteworthy attempt to capture the magic of Breath of the Wild. The puzzles and combat are strengths, but it’s the world-building and characters that fall short. Even with the surprises, the campaign fails to draw players into the mythology that it’s trying to weave.

The project has the qualities of the Zelda title but none of the soul of its design. Still, that could be enough for players looking for an adventure in that vein, and it’s likely to be the first of main efforts trying to capitalise on the style.