“The Falcon and the Winter Soldier’ review: Racism is a powerful villain in this new Marvel and Disney+ series 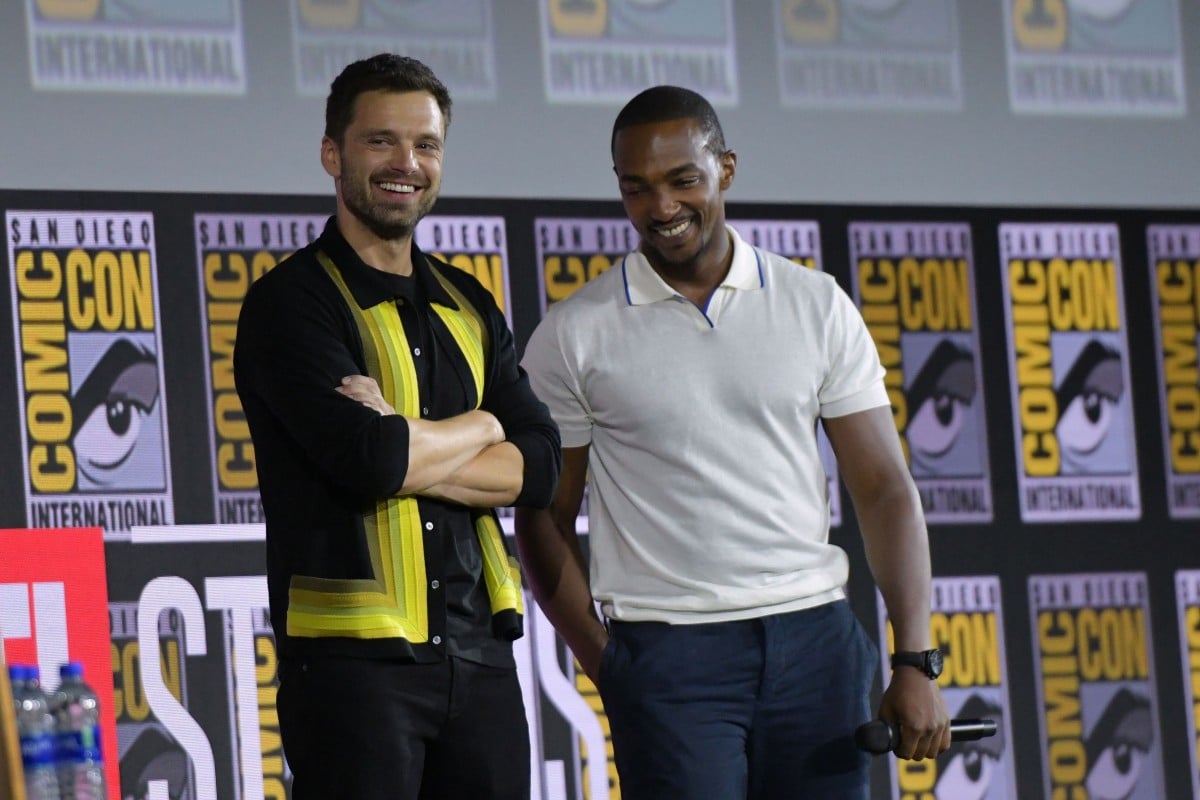 Sebastian Stan and Anthony Mackie speak on stage during Comic Con in San Diego, California in 2019. They star in "The Falcon and the Winter Soldier,” the second Marvel show to hit Disney+. Photo: AFP

A Black superhero goes from sidekick to centre stage in Marvel’s latest must-stream event, The Falcon and the Winter Solider, a six-part series that deals with the realities of racial inequity in a fantastical universe of conflicted avengers and hellbent villains.

Following the critically acclaimed WandaVision, this live-action drama is also set after the catastrophic events of Avengers: Endgame, but that’s where the similarities end.

The Falcon and the Winter Solider premiere has more in common with the traditional storytelling of Marvel films than the experimental realm of Wanda and Vision. The high-flying drama kicks off with a heart-pumping action sequence: Falcon’s on an airborne rescue mission, where his billion-dollar set of wings and fancy flying suit come in handy during a hijacked military operation somewhere near the border of Tunisia.

He boards enemy aircraft midflight, brawls inside plummeting planes, deflects bullets midair and outpaces missiles, all at dizzying altitudes in a combat scene made for the big screen.

Fun facts from behind the scenes of Black Panther

But once he’s safely back on the ground, the episode slows down considerably to explore the backstories of its characters - Wilson’s in particular. Pacing that requires patience is a risky move, especially in episode one, but the buildup works, subtly creating tension on several fronts.

It’s hard to know where this series from creator and showrunner Malcolm Spellman (Empire) is going, but in that episode there are intriguing hints that this is one superhero series where even the strongest of Stark-made materials can’t protect against racism.

The aging Steve Rogers, aka Captain America (played by Chris Evans in the films), passed his iconic shield to Wilson in 2019’s Endgame, and now the airborne hero is hesitant to assume the role. (Without spoiling anything here, it turns out the choice may have never been his to make in the first place.)

Meanwhile, Wilson is trying to help his sister Sarah (Adepero Oduye), a struggling single mom, revive the family’s fishing business and keep the house their parents gave them. But a visit to the bank shows that even Falcon’s celebrity status won’t override decades of unfair, racist practices woven into the American banking system.

For his part, Barnes, Rogers’ friend turned enemy turned confused collaborator, is waging his own battle against severe PTSD from his days as a brainwashed assassin for Hydra, an authoritarian paramilitary organisation with an ambition of world domination.

Netflix’s ‘The Defenders’ is definitely worth the watch

He’s in therapy, but of course he’s not the best patient. He’s also questioning his role in a post-Captain America world.

Their personal dilemmas play out against an emerging global threat that will most certainly cause these reluctant allies to deal with their baggage while beating up bad guys. Viewers need to stay tuned to see this unlikely duo fight side by side - or even, perhaps, one another. There’s undoubtedly more to their backstories that will bind the two characters and challenge their ideas about one another.