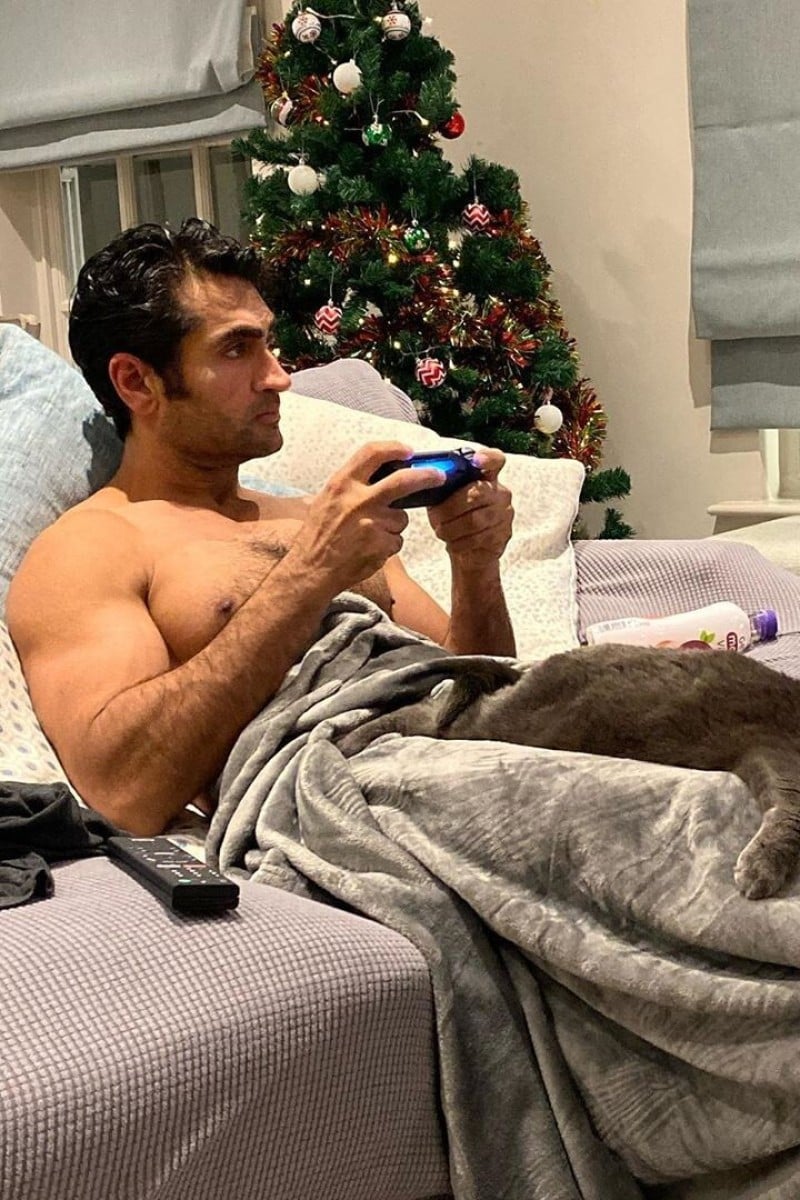 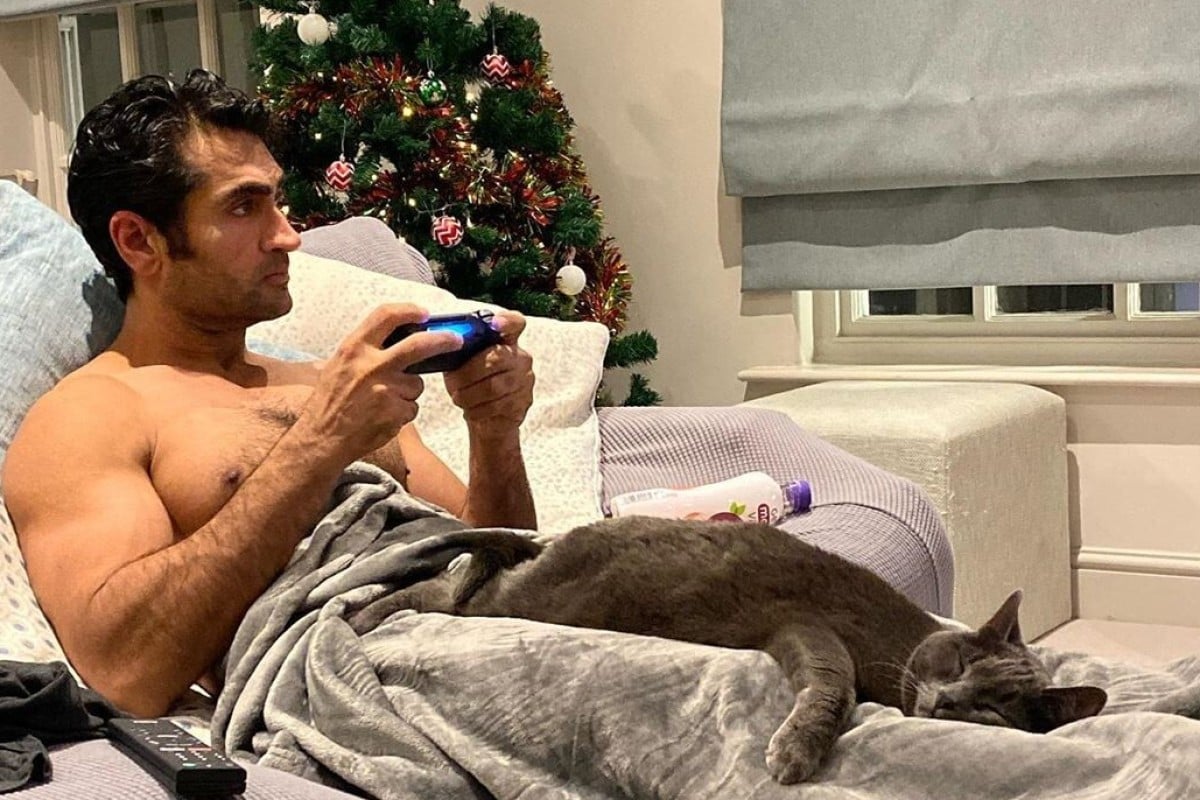 Kumail Nanjiani worked hard for his physique, but got slammed on social media. Photo: Instagram/Kumailn

Kumail Nanjiani turned heads in late 2019 after revealing his muscular physique in preparation for his role as Kingo in Marvel’s Eternals.

About a year later, another picture of Nanjiani, the Pakistani-American star of Silicon Valley and The Big Sick, showed him celebrating 2021 in a tight, long-sleeved shirt that showed off his bulging biceps.

It spurred quick backlash with Twitter trolls accusing the star of taking steroids or having plastic surgery.

But experts say the outcry over the actor’s chiselled physique is a result of systemic racism and a misguided standard of masculinity.

When a white male celebrity bulks up – think John Krasinski or Chris Pratt – people are less inclined to critique and more inclined to thirst.

“Especially since all the Chris’ (sic) have done the same super-soldier programme and never got any flack for it. I wonder what the difference is?”

Further inclusive representation in pop culture and the industry pushing back against supposed norms could help poke holes in people’s perceptions.

“Popular culture is steeped in histories of racism and colonialism that create hierarchies of desirability, sexiness, and masculinity,” Jigna Desai, a professor of gender, women and sexuality studies at the University of Minnesota, says. She refers to this as the “white gaze”.

Op-ed: Hollywood needs to get real with its characters, and reflect the real world

“White men are often seen at the top of this hierarchy,” she says. “Black men too are often associated with athleticism, sexiness and masculinity. Asian American men, including South Asian American men, on the other hand are stereotyped as unattractive, nerdy, not sexual, and certainly not buff.”

“There’s a way in which his performance and his bodybuilding and how he’s gotten into shape is, in many ways seen as genetically and biologically impossible, that this is a common racial stereotype of South Asians as they could never be athletic enough, and never have the ability to create a certain type of sporting body.”

There have certainly been men who break the norm in Hollywood. For example, Naveen Andrews in Lost and Sendil Ramamurthy in Heroes played fun, sexy and interesting characters, according to Desai. But the more common portrayal is a character like Kunal Nayyar’s nerdy “Raj” in The Big Bang Theory” Desai says.

This explains the shaming of Nanjiani’s body. “People assume that the Pakistani American guy didn’t get buff naturally,” Desai says, noting the thinking is motivated by racism.

“They also assume that South Asian Americans are not athletic or fit – so it must be steroids or plastic surgery. But he clearly worked for that body and documents his experience throughout the process quite publicly.”

The effects of body shaming

There’s a much greater scrutiny for people of colour’s bodies than for white bodies, Sabrina Strings, associate professor and undergraduate director of sociology at the University of California, Irvine, says. This stems from the effects of colonisation and slavery.

“It becomes somehow more natural to try to shame them and stigmatise them on social media, because that’s the kind of treatment that they could expect in real life,” she says.

No matter the colour of your skin or your gender identity, body shaming can have a harmful effect on the way you perceive your body. Celebrities receive the brunt of such shaming on social media when they present seemingly drastic changes to their bodies.

“There’s this public perception that a celebrity’s body is kind of fair game to critique, and people think that they can just dictate how they expect it to look. And of course, this isn’t true,” Chelsea Kronengold, communications manager of the National Eating Disorders Association, says.

While body shaming and eating disorders among women is more often discussed, such concerns and illnesses affect men too. Ten million men in the US will have an eating disorder during their lifetime, according to the National Eating Disorders Association.

How can I support a friend with an eating disorder?

“Anytime something like that occurs, whether or not the intention is not racial in nature, it is a microaggression either way, and I think that we often have these preconceived notions and stereotypes that certain people, particularly people of colour, are not supposed to possess certain attributes,” Kevin Chapman, a clinical psychologist, says.

Nanjiani told Men’s Health magazine earlier this year: “I don’t want to discount people who genuinely have debilitating body issues. I don’t have that.

“But I did start getting some body dysmorphia. I’d look in the mirror and I’d see my abs – and when I looked again, they would fade. I would just see the flaws.”

When in doubt, people should mind their own business. Chadwick Boseman’s thin physique turned out to be a result of his colon cancer battle, for example, though articles commenting about his weight surfaced in April of last year after a video post on Instagram.

In some cases it may be worth engaging with people who make racist comments on social media, particularly if you are also not a person of colour.

“Rather than blasting them, having an open dialogue by asking them what you meant by that comment allows you to be an ally and call it out in a way that makes them non-defensive,” Chapman suggests.

For Nanjiani’s case specifically, it’s worth the industry examining what the ideal superhero body is in the first place.

He suggests a more diverse array of superheroes, from race to body type to sex to gender, and an acknowledgment of the way society typically sees superheroes as white and masculine.

Boseman in Black Panther was important for the Black community, and Nanjiani in turn will be important for the South Asian American community. Small windows of possibilities may open up for overcoming racial injustice and racial stereotyping in both Hollywood and the US.

Nanjiani’s role in the film also doesn’t mean society should suddenly move past the racist thinking that ignited negative comments in the first place.

“The moment we fail to acknowledge that history is the moment we also really forget why there’s been that absence and why we have all these acts of shaming at this present moment,” Thangaraj says.