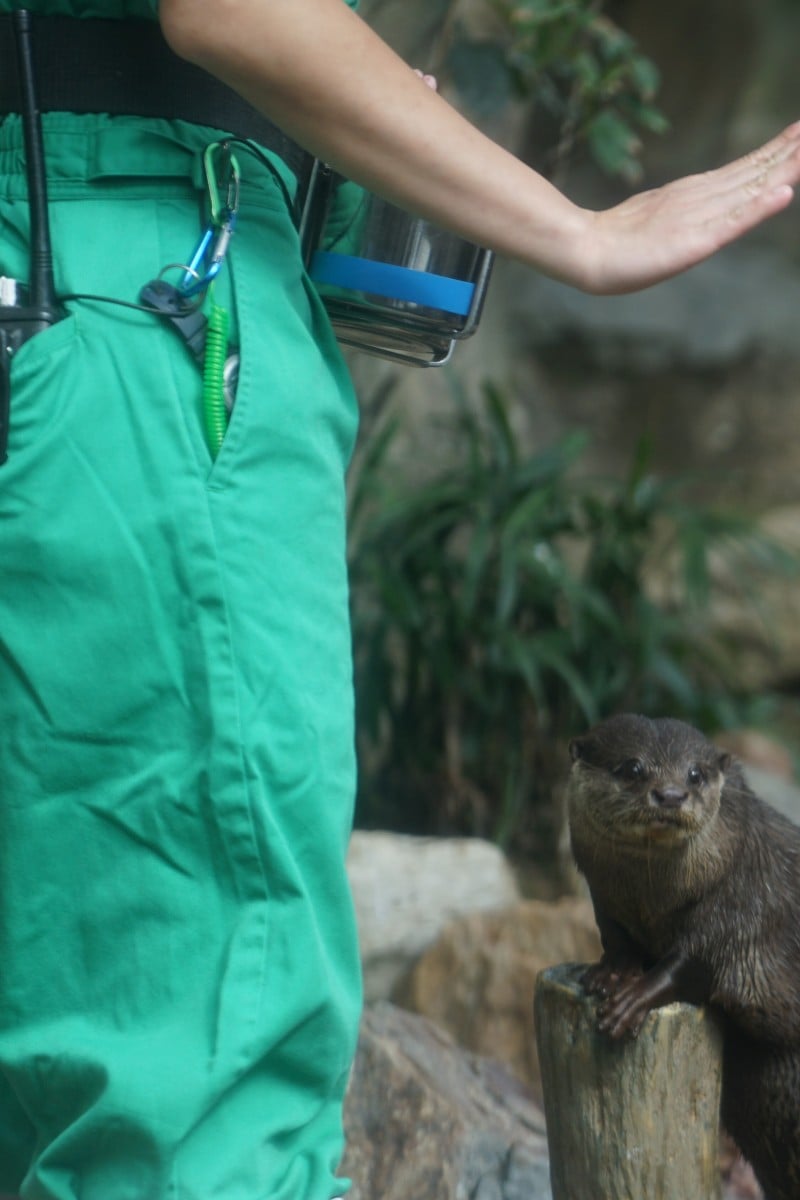 A day in the life of an Ocean Park otter caretaker 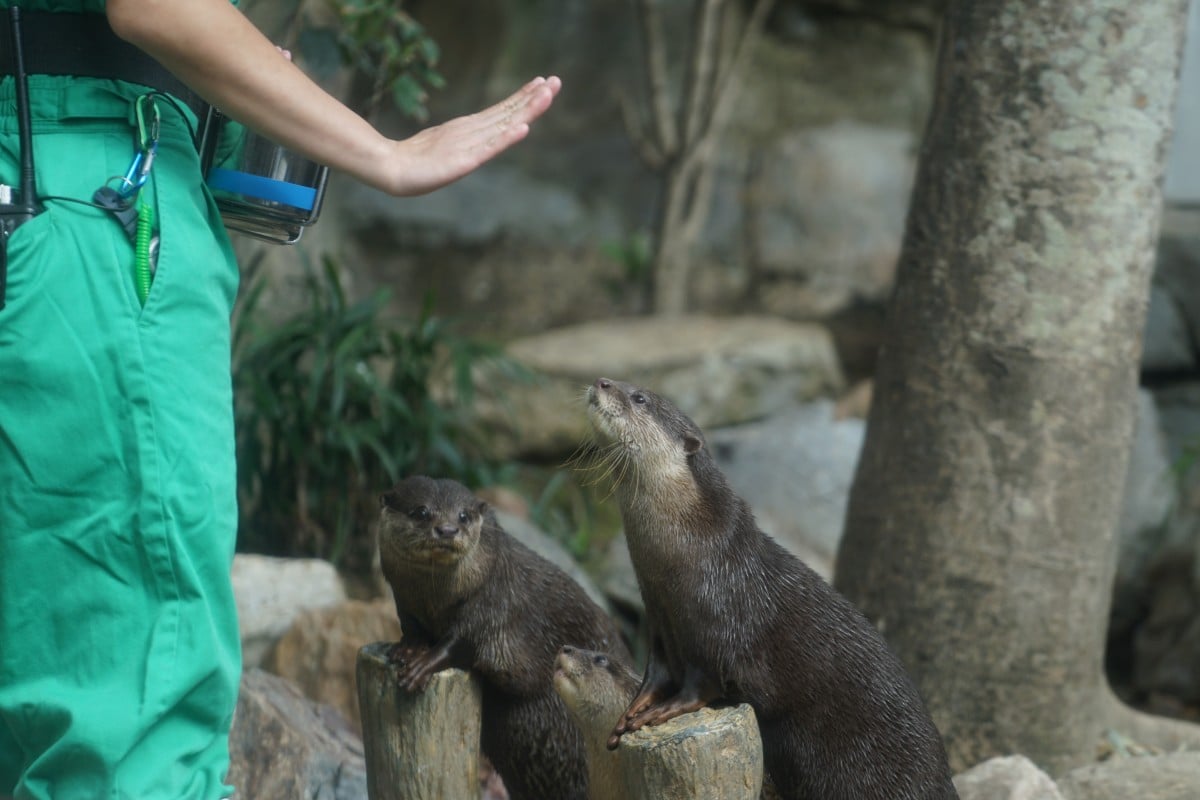 The otter pups, born in August last year, do training with their caregivers in the closed Ocean Park. (Photo: Junior Reporter Kanishka Singh)

Every day at 8am, Mo Chun Pik-man rolls up the sleeves of her green overalls, and sets off Ocean Park’s Panda Village. She brings with her raw turkey meat, catfish fillets, and giant freshwater prawns.

No bamboo; she’s not there to see any of the famous black and white bears. Her job is to feed the park’s otters.

Six new pups joined the otter family at the theme park last August, doubling the population to 12. Mum Fun and dad Si (“Hour” and “Minute” in Chinese, respectively) arrived in April 2018, and had four pups four months later, in August.

That’s when Chun began looking after the otter family. She tells Young Post that taking care of animals had always been her childhood dream.

“When I was young, I had always looked up to the animal caretakers at Ocean Park and wished I could be one of them,” she says, adding that she started working there after graduation about 10 years ago.

Being an animal care specialist like Chun is not just about playing with cute animals all day, though.

The job also involves cleaning animals’ homes, which can be pretty gross.

Otter poop, aka “spraint”, in particular is known for its stinky smell.

“When the otters first arrived at the park, they didn’t know where to poop so they would do it all over the place. Sometimes, you’d even find poop where they slept,” Chun explains. Luckily, they have now been trained to poo in the specific “toilet area”.

Chun is also responsible for tracking the otters’ health. Every day, she weighs them, and measures how much they’ve eaten – otters eat four meat- and seafood-based meals per day – and regularly consults vets about their diet.

Would a bottle collection scheme inspire people to recycle more?

Rather like young dogs, the otter pups need training so they know things like where to poop and where they will be fed. Chun keeps a handwritten record of their progress.

“Every otter learns at a different rate, so I keep a daily record to see which one learns faster or slower, and provide training according to their growth and needs,” she says.

After “class”, she then plays games with them, which she refers to as “enrichment”.

For example, Chun says the trainers throw golf balls into the water, which the otters try to catch as they sink.This encourages them to engage in more “natural behaviour”.

If you do your training, you might get treats! (Photo: Junior Reporter Kanishka Singh)

“Swimming down to catch the balls is similar to how the animals look for prey in the wilderness,” she says. “Through these enrichment activities, we can improve the otters’ physical strength.”

The trainers also try to enhance the otters’ mental abilities by using “puzzle feeders”, which store food that can only be accessed when the animals figure out how to get to it. They’re like an animal version of brainteasers.

Chun spends a lot of time with the otters, so their life milestones are very important to her – even when she’s not on duty. When mother otter Fun went into labour with her first litter of pups in 2018, Chun was on leave. But the moment was too exciting to miss.

Read this first if you’re thinking about being a vet

“I was very excited when I heard the news. I got dressed quickly and hopped in a taxi to the park, hoping to catch the precious moment,” Chun says. “In the end, I was lucky enough to witness the birth of three of the otter pups.”

Two years later, there was no such rush. Chun was duty, so was ready when Fun went into labour for the second time – and this time, she knew what to expect.

“I recognised the smell as soon as I walked into the office,” she says. “The next second, I was sure what was happening – when I heard some soft, squeaking, hissing sounds,” the sound of the new arrivals.

Chun found three baby otters during the initial count. However, more surprises were on the way.

When she went in to feed the parents and older siblings, she found a fourth pup. Fun had also given birth to the placenta, the organ that provides oxygen and nutrients to unborn babies, which usually comes out after the young are born.

It wasn’t the end. On each of the following two visits to the otter enclosure, Chun found another pup, for a final total of six. “It’s like the labour was never-ending!” she laughs.

While the parents’ names and those of the older pups are related to time, the trainers decided the new batch would be different. They were given names related to the sky: Shiny (like the stars), Sunshine, Mooney, Stormy, Cloudy and Misty.

When she’s feeding and training the otters, it’s important that Chun is able to tell them apart – a task she describes as the biggest challenge of her job. However, she has found a way to identify them.

“Each otter has different features on its nose,” she says. “Stormy has the most unusual trait: the left side of his nose is black, but the right side is pink.”

Ocean Park opened last week after being closed for more than two months due to the pandemic, giving visitors the first chance to meet the new pups in real life.

But it’s not just humans who are excited. Chun says the otters “peep at whoever is walking past, as if wondering who they are – and that they have been greatly missed”.