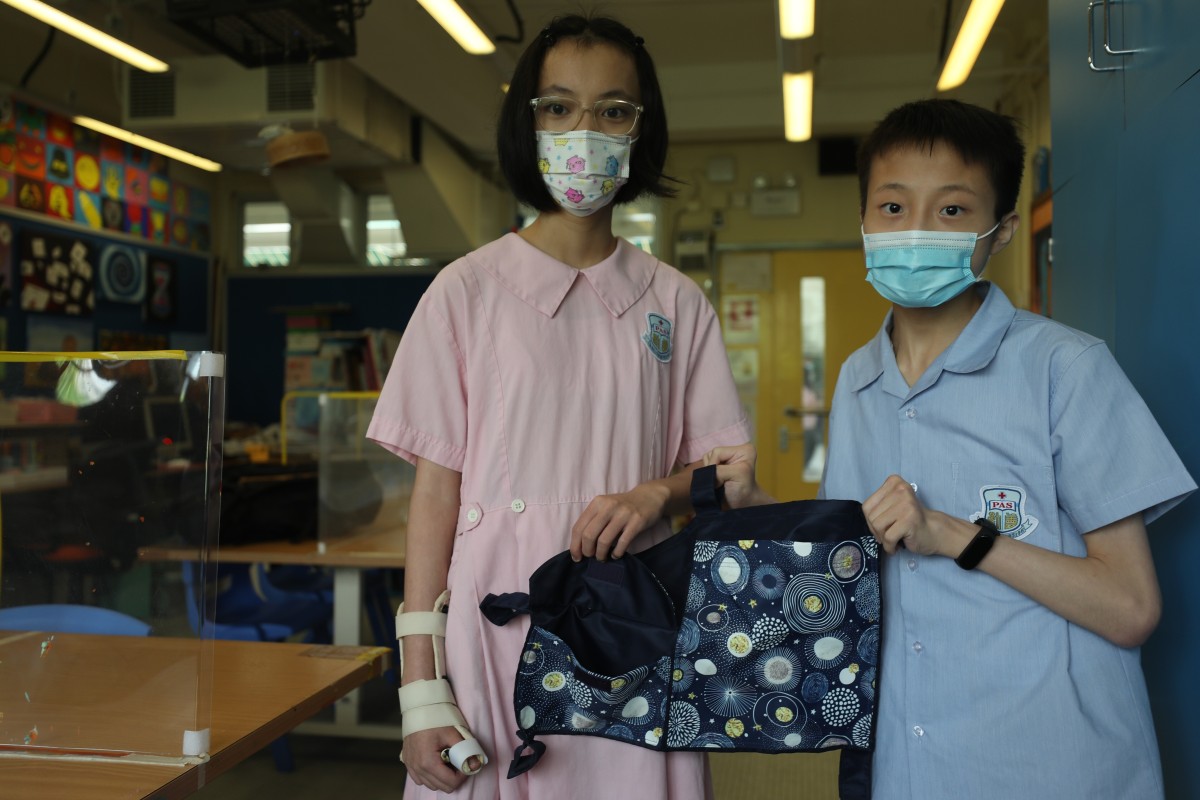 Noting how difficult it could be for some peers to hold a bag while using walking aids, three Hong Kong teenagers decided to do something about it – designing a pouch that can be attached to a walking frame, and winning a local award in the process.

The storage case, which can carry objects as large as books and bottled water in its biggest compartment, was the creation of students at Hong Kong Red Cross Princess Alexandra School in Kwun Tong, which cares for students dealing with physical handicaps or sickness.

The psychology student hoping to remove the stigma of mental health

The trio – Yeung Chin-hang, Fu Lee-lee and Tam Chi-wan – said they noticed some of their schoolmates needed both hands to control certain types of walkers as they moved, making it difficult to hold a bag.

“We wanted to make a pouch (that can be attached to a walking aid) and started designing it about a year ago,” Yeung, 15, said.

The Form Three student said the prototype for the storage case, which is about the size of a small briefcase, was designed specifically for one type of walking frame.

Leung and Fu attach one of their designs to a walking frame. Photo: SCMP / Xiaomei Chen

“We want to make another one for wheelchairs,” he said, noting the team had kept improving the design. The student added that the straps of the pouch also needed to be longer so it could be tied to other walking aids more easily.

“[The pouch] can make their lives easier,” she said, noting the trio’s design could spare them the trouble of carrying a bag.

Their work earned them praise from judges and two top prizes at the 2019-2020 Youth Impact Award, and now, a nomination for this year’s Spirit of Hong Kong Awards.

Bonnie So of the Hong Kong Red Cross recommended Yeung, Fu and Tam for this year’s Spirit of Youth award, which recognises young people who have shown a commitment to the community.

The students said the project, from conception to creating their first prototype, had taken about six months.

“We spent a lot of time tweaking the size of the pouch to make sure it fitted well,” Fu said.

Yeung said he was thankful that teachers at the Kwun Tong school had given them advice and support.

The power of young people

“My parents also shared their views on our idea,” he added.

Fu said she was eager to create more useful items to help people in need.

The students said their design, which has yet to go into mass production, still needed refinement.