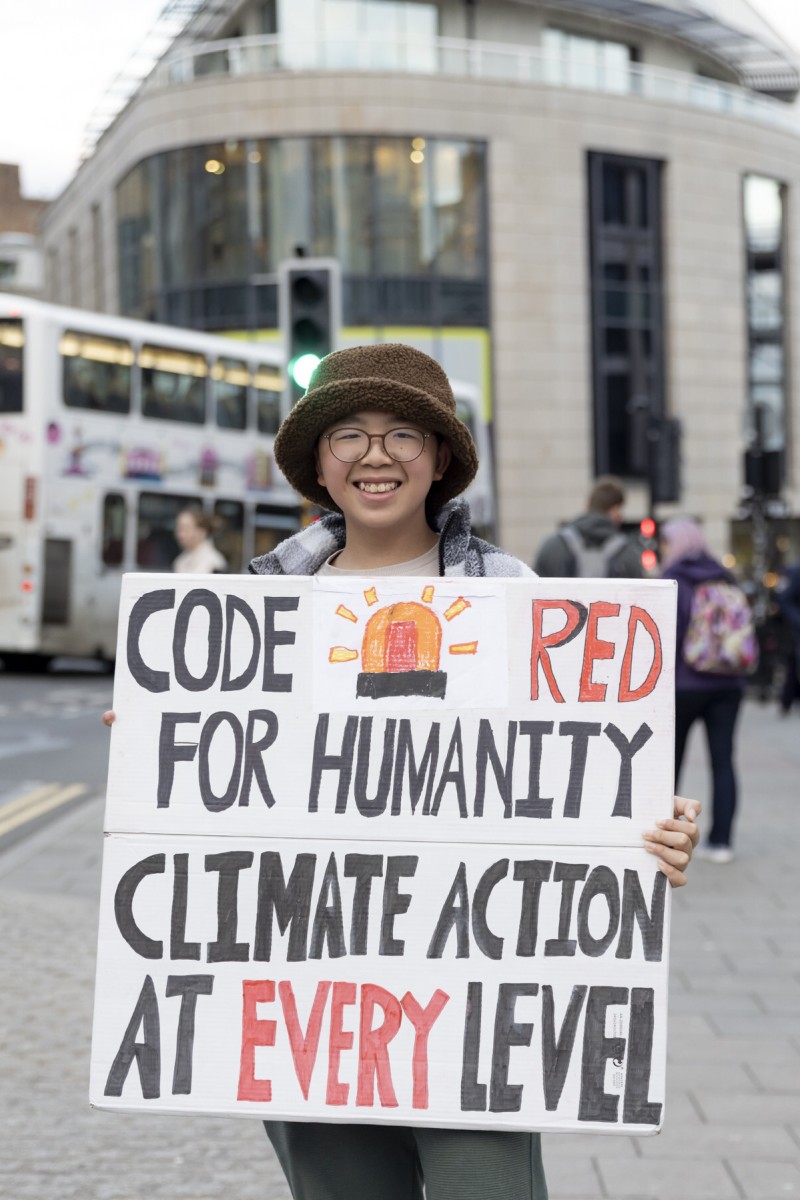 ‘Hong Kong’s Greta Thunberg’ may have moved to Britain, but his fight for action against climate change isn’t over Lance Lau was well-known in Hong Kong for standing outside his school with signs to raise awareness for climate change. Now he lives in Britain, but he still continues his activism. Photo: Lance Lau Hin-yi

Just as world leaders were about to converge on Glasgow for the UN Climate Change Conference (COP26) last month, a 12-year-old Hong Kong activist stood in the streets of Britain all by himself, holding a sign emblazoned with the words: “Code Red for Humanity. Climate Action at Every Level”.

Decked out in a plaid fleece jacket and brown bucket hat, Lance Lau Hin-yi – dubbed Hong Kong’s Greta Thunberg – was on a solo strike to call for awareness on the climate crisis before the summit.

At that time, he was already into his 110th consecutive week of climate activism, and primed to travel from Britain to Glasgow to attend the Climate Change Conference of Youth (COY), the young people’s equivalent of COP26.

“[Passers-by in Britain] told me I should not be alone there. I knew I was not alone,” he said in a video interview.

Born and raised in Hong Kong, the bespectacled teen has been a climate activist since 2019.

His journey began when he answered a call from well-known Swedish activist Thunberg for young people worldwide to skip school and go on strike, championing action against climate change.

At the time, Lance wanted to become an architect, but Thunberg’s urgent message changed his mind.

“She said something big is going to happen; we might die. That was what pushed me over the edge,” he said.

In March 2019, more than a million students across some 125 countries boycotted classes as part of a global initiative called “School Strike for Climate”. In Hong Kong, Lance was one of the few local students among the 1,000 protesters taking part in the movement. A majority of participants were either foreigners or international school students.

After the protest, Lance organised a beach clean-up on Lantau Island. Before the campaign, he made leaflets and distributed them to people on the streets. He received permission from his residential estate to put up the leaflets on walls in a bid to get people interested.

On the day of the clean-up, no one showed up, except him and his parents.

Even if he is cleaning up beaches alone, Lance Lau is not afraid to take action to protect Hong Kong’s environment. Photo: Handout

“It was a bit sad, but I wasn’t too worried,” he said, adding that he understood he might not have had enough time to promote the green action.

A few months later, what was believed to be the world’s largest-ever global demonstration took place. More than 6 million people from 185 countries took part, demanding that urgent steps be taken to tackle global warming.

Hong Kong was in the throes of an unprecedented anti-government protest movement at the time. The global climate protest drew muted response in the city, but Lance was among the faithful few who bought in.

He glued some paper together, made a sign, and waved it through the classroom windows at Ying Wa Primary School, where he was studying. That action landed him an appointment with the school’s social worker.

He was excused from class for the entire day and told to instead spend time coming up with ideas on how he could champion his cause without missing out on learning. Lance came up with the idea of standing outside the school for an hour every Friday before classes began, placard in hand to raise awareness on climate change.

“At first some people laughed a bit and rolled their eyes,” he recalled. “But after eight weeks, people started to take me really seriously.”

Lance Lau has been protesting against climate change since he was just a 10-year-old student at Ying Wa Primary School in Hong Kong. Photo: Xiaomei Chen

He has launched other similar actions since, and having moved to Britain, took to the streets last month for his solo demonstration.

Asked if he has ever felt discouraged by doubters, he replied firmly: “Never.”

“It’s perfectly normal for people to ... be a bit sceptical about some random kids on the streets telling them, you need to do stuff, like, to eat less meat,” he said.

“Sometimes ... no one’s willing to talk to me. But then, I’d tell myself at least I’m on the streets. I’m showing my side to people. At least the thought of the climate crisis is popping into their heads.”

Now that he is studying in Britain, he has noticed that Hongkongers and the British see the issue differently.

“In England, standing in the street, and just waving a sign, you can get lots of people’s attention,” he said.

“People would honk their horns and be like, ‘keep going’, giving you lots of supportive comments. The seed has already been planted.”

Lance, however, remains hopeful that awareness of climate change is gaining traction in Hong Kong. He stressed that schools must educate teens on the subject.

“Understand the magnitude of the situation. Decide for yourself what you want to do,” he said. “If you’re a student, a worker, a teacher or a CEO, do whatever you can.”

Earlier this month, Lance was also among an estimated 1,000 people who gathered in Brighton, in southern Britain, for the “Global Day of Action for Climate Justice” protest.

He brought a sign with the words: “No more blah blah blah”, a nod to Thunberg’s dismissal of what she perceived as world leaders’ attitudes at COP26.

Lance Lau Hin-yi took part in a protest in Brighton, Britain to make his voice heard regarding COP26

At that summit, diplomats from about 200 countries had struck an agreement aimed at ramping up efforts to combat global warming, urging governments to come back to the table with better proposals to fight emissions.

Lance said: “COP26 presented some great pledges, but it was not even close to what is needed – even if we follow through with all the pledges.”

On how he plans to fight climate change, Lance’s ambition is clear – to follow through on his belief that he is not a one-man show in his cause.

“My goal is to engage the youth and engage students my age, maybe younger, maybe older to do stuff together,” he added.