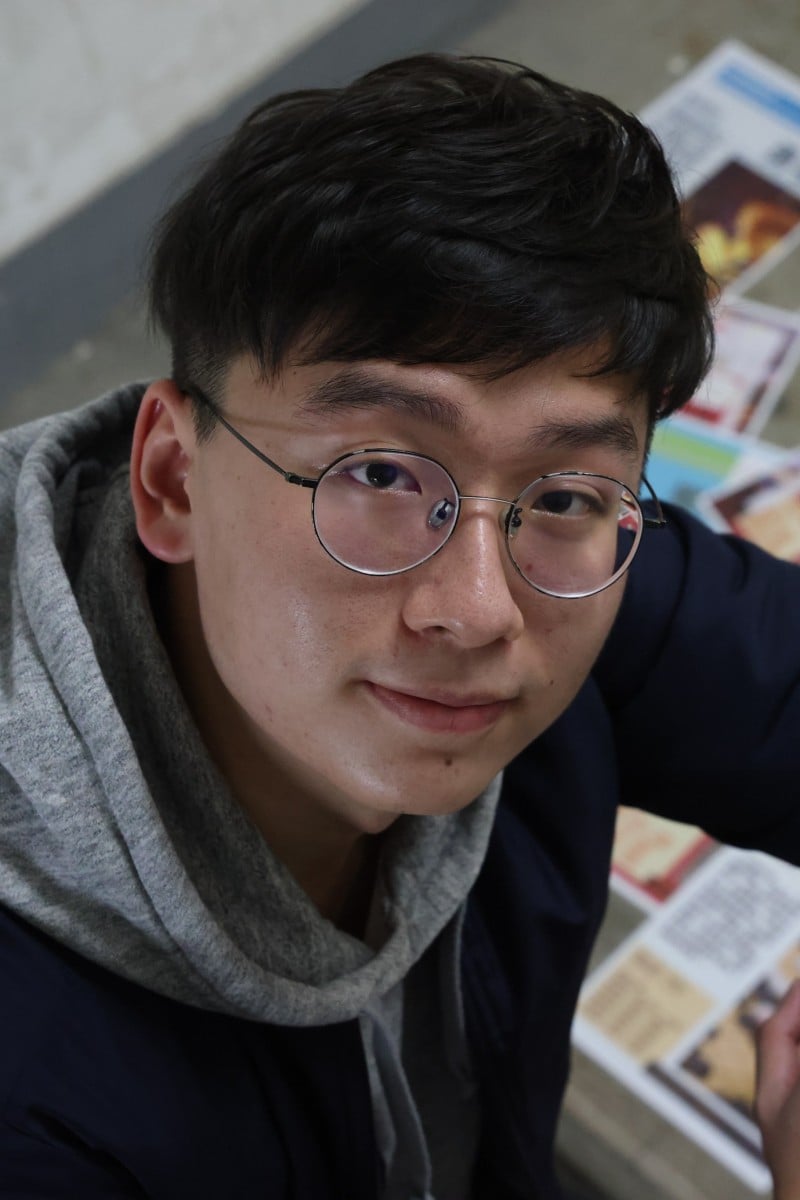 Before the tragedy, it had seemed like just another ordinary day at school. When the dismissal bell rang, eager pupils left the classrooms and quickly filled the corridors.

Out of the blue, a wretched scream pierced the air. In the stairway, a student was lying in a pool of blood.

“Who pushed the student down the stairway? What was the intention? Are there any shreds of evidence?”

These are questions Lyle Kiu Pak-heng is used to asking. But the 21-year-old is not a detective nor is he a schoolteacher.

Kiu is a registered social worker who often moderates live action role-playing games (Larp) with schools, companies and other organisations.

Larp is a type of improvisational game in which each player acts out a character based on a given script or scenario. This fictitious school tragedy is one that was written by Kiu, who is in his final year as a social work student at the Caritas Institute of Higher Education.

“This script is about school bullying. Each player takes on a role as a bystander to school violence,” he explained. “Through different rounds of investigation, participants try to figure out the truth.”

In 2020, he co-founded the Table for Choices Club’s Empathetic Journey of Life (EJL) programme, which trains social workers and educators to use Larp in their work.

In recent years, the game has become a huge hit among youth in Asia, as evidenced by the rise of Larp-related mobile games, stores and variety shows, such as the hit Korean programme Crime Scene (2014-2017).

Last year, Hong Kong broadcaster ViuTV produced a Larp reality show called All Suspicious. A search on Instagram generates more than 50 online shops and party rooms in the city offering versions of the role-playing game priced from HK$120 to HK$500 per participant.

It was Crime Scene that introduced Kiu to Larp five years ago, and soon after, he played his first game with his elder brother and four friends.

“That was a complicated horror script ... and definitely not beginner-friendly,” he recalled.

Female gamers face stereotypes, but they are game to stay

But his frustrating initial experience just drove him to explore Larp further. The more he played, the more he was fascinated by its diversity of stories and use of logic.

He explained: “Each script tells a unique story – the processes and results are never the same as they depend on the players’ decisions and interactions in the moment.”

In his free time, Kiu has taken part so far in more than 100 Larp games and moderated more than 150, ranging from fantasy themes to fun food series and – the most prevalent – murder mystery games.

Depending on the plot, each game can handle between two to more than 20 players and end within an hour or, at its longest, seven hours. Larp games typically have six to seven stages, such as selecting characters, reading the script, discussion, investigation, voting and debriefing.

Video games an escape for American children during pandemic

“Some of the game’s elements – like role-playing discussions and debriefing – are also key for social work practices,” Kiu noted. “Therefore, I started thinking whether we [social workers] could use it as a tool to introduce social issues and values to young people.”

He then took an extra course at his school to learn how to use board games in social services. There, he bonded with senior social workers, who were also interested in the educational potential of games.

“We all believed in [the power of] game-based learning and decided to turn Larp into an approach to teach people empathy,” he said.

But they struggled to find educational scripts that were relevant to Hong Kong, as the city’s Larp industry mostly relies on sources from Taiwan and mainland China.

“[At the time], I only saw one script that was written and published in Hong Kong,” he recalled.

Lyle Kiu and another social worker have designed scripts that cover themes such as mental health, bullying and family relationships. Photo: May Tse

“My inspiration came from the emotional moments in life and the social issues that are often ignored ... When I was doing research and writing the script, I also reflected on my own life,” he shared, adding that each one took at least a month to complete and required several run-throughs to ensure they were functional and engaging.

After launching last August, EJL has since collaborated with many schools and organisations. The group has also conducted more than 10 workshops training educators and other social workers to use Larp in their professions.

Kiu said, “We are among the first in the city to mix Larp with education.”

Through one-and-a-half hours of role playing, the social worker explained, participants were immersed in specific issues as they practised empathy by putting themselves in the characters’ shoes.

The group discussions and interactive tasks train their critical thinking, interpersonal skills, communication and organisation. Afterwards, they spend an hour sharing their experiences to understand the full picture of the case.

So far, Kiu said they had received overwhelmingly positive feedback from social workers and young participants.

“With the script about family relationships, nearly half of the participants cry during the game,” Kiu shared.

One social worker told Kiu: “It was heart-wrenching during the group discussion when people of different ages opened themselves up and shared their experiences ... I have learned to cherish those around me.”

But Larp is still unfamiliar among most educators and social workers. Kiu said there was still a long way to go before these professions recognised the game’s potential.

“I have seen more youth organisations using Larp as a fun way to foster people’s communication. But I hope more people will recognise it as a professional approach to discuss serious issues that Hongkongers face,” he said.

(of a person) in a very unhappy or unfortunate state

Force a way through; penetrate

Relating to or characterized by spontaneous performance, especially in music or drama

Not real or true; imaginary or fabricated

A meeting to question someone, typically a soldier or spy, about a completed mission or undertaking