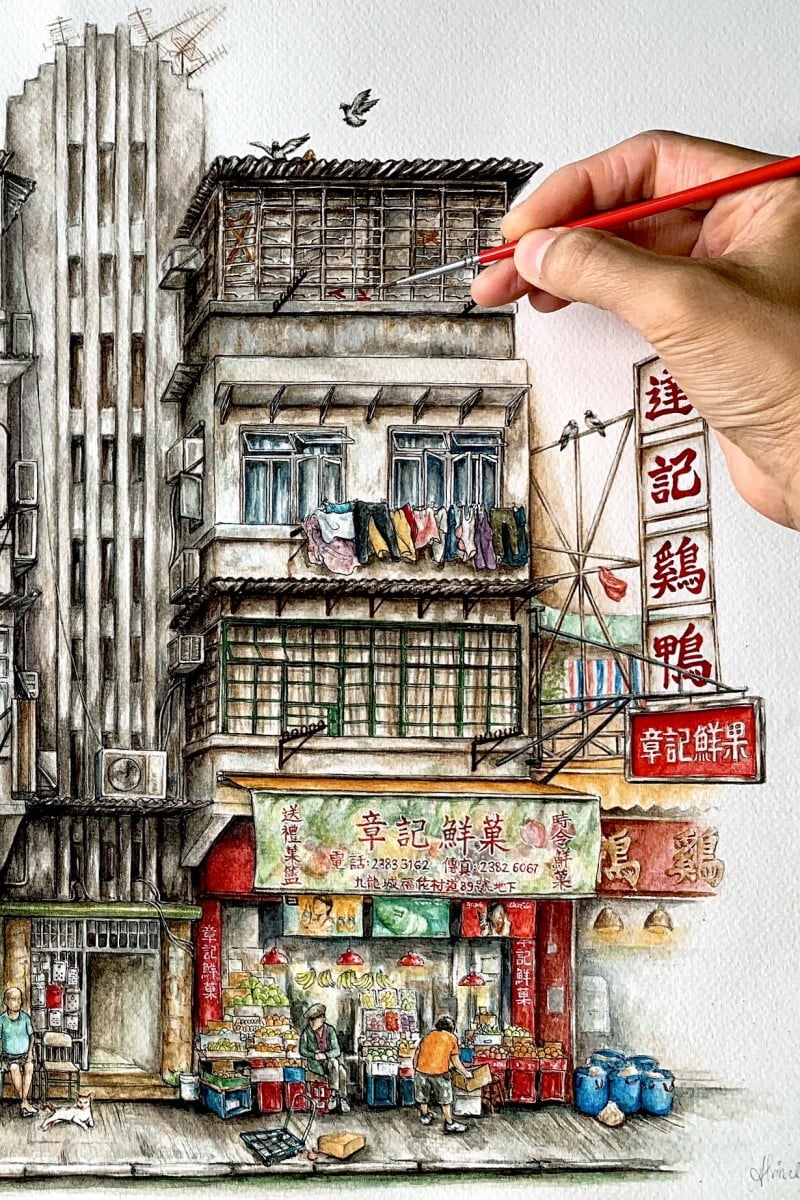 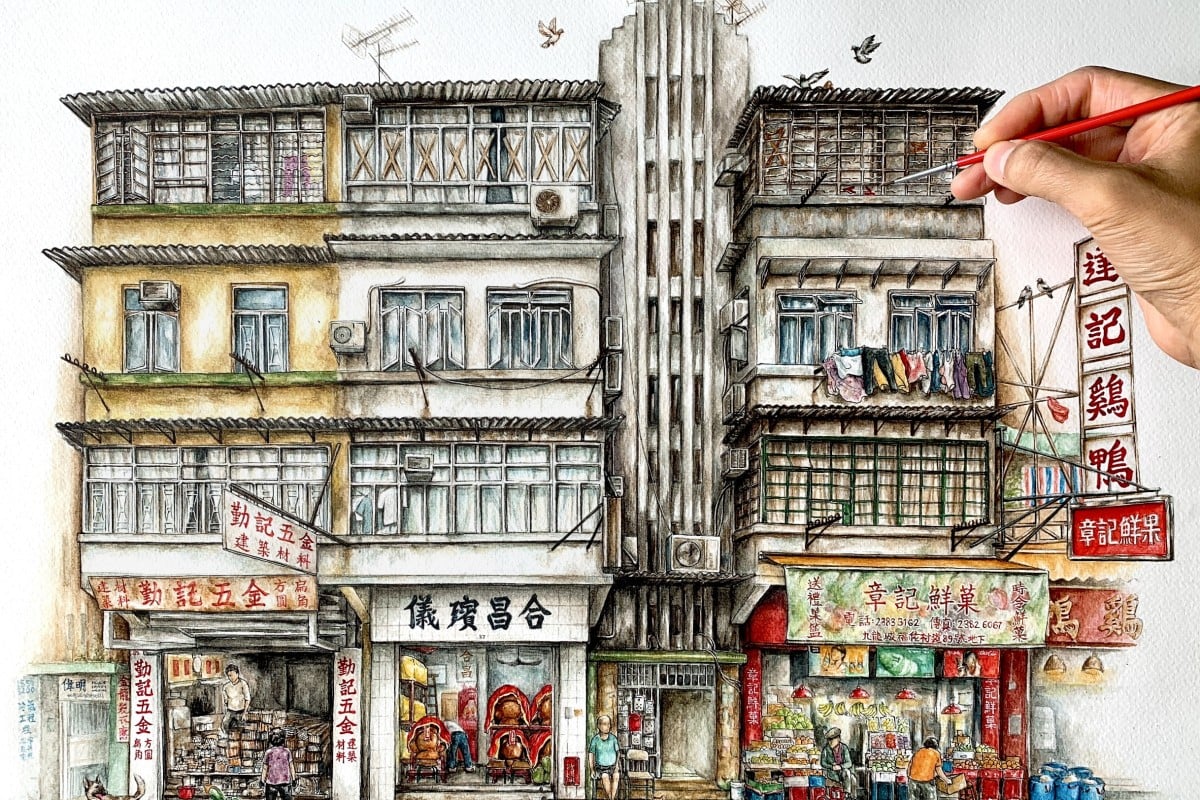 Beneath a three-storey tenement building on Fuk Lo Tsun Road in Kowloon City, a metal hardware store and a fruit stall sat for decades, as part of a close-knit community.

Both shops have since closed, but a painting by Hong Kong artist Alvin Lam has revived the memories there – especially for the family of Lee, the hardware store owner.

“This is a shop that my late grandparents built in order to raise their own seven children,” Lee’s granddaughter wrote in a message to Lam. “I have shared your post to my family, and they thought your work is lovely.”

Lam’s brush strokes brought to life the characters who lived on that street: Lee and her son, who cut metal on the pavement, and the fruit stall owner, known by residents as “old man”, who gave bags of fruit to the less fortunate.

Lam, in his 30s, is on a mission to preserve old Hong Kong and has since 2020 been recreating scenes of its sunset trades. He released his project, “14 years in Kowloon City” in August, tracing changes in the district.

“Everyone you see in the painting was real,” Lam noted, adding that even a cat with a bent tail was a beloved member of the community. “Everything was real, down to the details of the laundry racks to every patch of dirt.”

Kowloon City is set to undergo an urban renewal plan in the next 10 years. But even before the redevelopment, many storied businesses in the district have bowed out, including Kung Wo Beancurd Factory, a much-loved tofu shop that had been around for more than half a century.

To depict the old neighbourhood in painstaking detail, Lam pored through Google Maps archives and relied on photographs and anecdotes provided by the Decoff family who lived there for 14 years.

Alvin Lam poses in front of the street in Kowloon City that is depicted in his painting. Photo: Xiaomei Chen

Troy Decoff, a father of three who has since relocated back to Canada, said: “We were instantly captivated by the older buildings and unique character of Kowloon City.”

The Decoff family, who lived on top of the building, came to Hong Kong in 2007 and witnessed the rapid redevelopment of the area.

“Over the years, new high-rises seemed to pop up overnight as the low-rise, walk-up flats were quickly being replaced. It was always sad to see the ground-floor shops closing, which often included some of the dying trades and businesses in Hong Kong,” Decoff added.

“These helped shape that unique character, making Kowloon City such a vibrant neighbourhood.”

Lam’s work is a tribute to Hong Kong’s character, offering an up-close and personal look at its hardy craftspeople.

“These are just, on the surface, very ordinary, very insignificant scenes or shops,” he said. “But once you dive into all these personal stories, it puts a face to the place.”

The artist lamented that Hong Kong was becoming a “cookie-cutter city” as facades that made it unique faded.

“Our generation will be the last generation to ever witness and get to appreciate these places that shaped and built Hong Kong. It’s sad because Hong Kong is going down a very dangerous path ... where we are losing touch with all that shaped us.”

Lam added: “It’s time the government starts looking into preserving these [traditional shops]. Why else would people come to Hong Kong? What, for museums? Or for exhibitions? For Victoria Harbour? Is that it?”

Lam was often captivated by the ruggedness of his home city – the weathered corners, the chipped paint on walls of aged buildings, and the delicate carvings on old metal gates that have stood the test of time.

As a child, Lam was uninterested in Hong Kong culture as he did not get a chance to explore the Kowloon landscape. He had gone abroad for seven years to study, and when he returned, he could barely speak Cantonese.

“It took me many years to start adjusting back,” he recalled. But being a stranger to the city gave him a new-found appreciation for places locals might take for granted.

“Do you notice when you travel, we look for authentic places? The same way expats that have spent time in Hong Kong also see Hong Kong in a different way than locals because they have the advantage of the third-person view,” he said.

“Every time I walk into Sham Shui Po, I still look at it with appreciation ... all those little bits and pieces, every old corner, every crumbling building, every ancient shop there and the people behind it – knowing that these will disappear in my lifetime.”

In his quest to capture in art what cannot be preserved in real life, Lam’s muses include the city’s last remaining mahjong tile carver in Hung Hom, a bird cage maker in Prince Edward and a metal postbox maker whose shop closed down this year.

Lam makes a living by selling prints and postcards of his artwork. He has held a love for drawing since young, but it was only recently that the artist ventured into watercolour urban sketches after witnessing the city’s changes.

It all started with a simple sketch at the city’s 160-year-old open-air Graham Street Market in Central.

“I’ve witnessed [most of] it decimated under the whole redevelopment project ... It was a place with a lot of memories,” he said. “My mum always went to this noodle factory shop to buy wonton wrappers. The shop is still there – I just saw how it changed.”

After reaching out to traditional stores, he would sit on a foldable chair outside to paint and bring to life the beauty he saw in them.

In 2020, the artist began developing his collection as part of a mission to preserve old Hong Kong, while also documenting society amid the coronavirus pandemic.

After finishing his paintings, Lam gifts them to shop owners.

“It makes me very happy when you see them display the painting – the tofu shop, rice shop, the birdcage maker,” he said. “It is also for them to feel like someone found their years of work special ... It is about recognition and respect.

“Hopefully I can bring my work overseas, so that I can share these stories ... and more people can get to know this authentic side of Hong Kong and realise it is not just a shopping paradise.”

To retire or withdraw gracefully

A short account of a particular incident or event

The front of a building, especially a large or attractive building

Having a roughly broken, rocky, hilly, or jagged surface.

Changed in colour or form over a period of time under the effects of weather conditions.

Greatly reduced in number or amount, or having suffered great loss or harm