SOTY 2018: Grand Prize winner on how he wants Hong Kong's education system to change, and embracing being 'stupid' 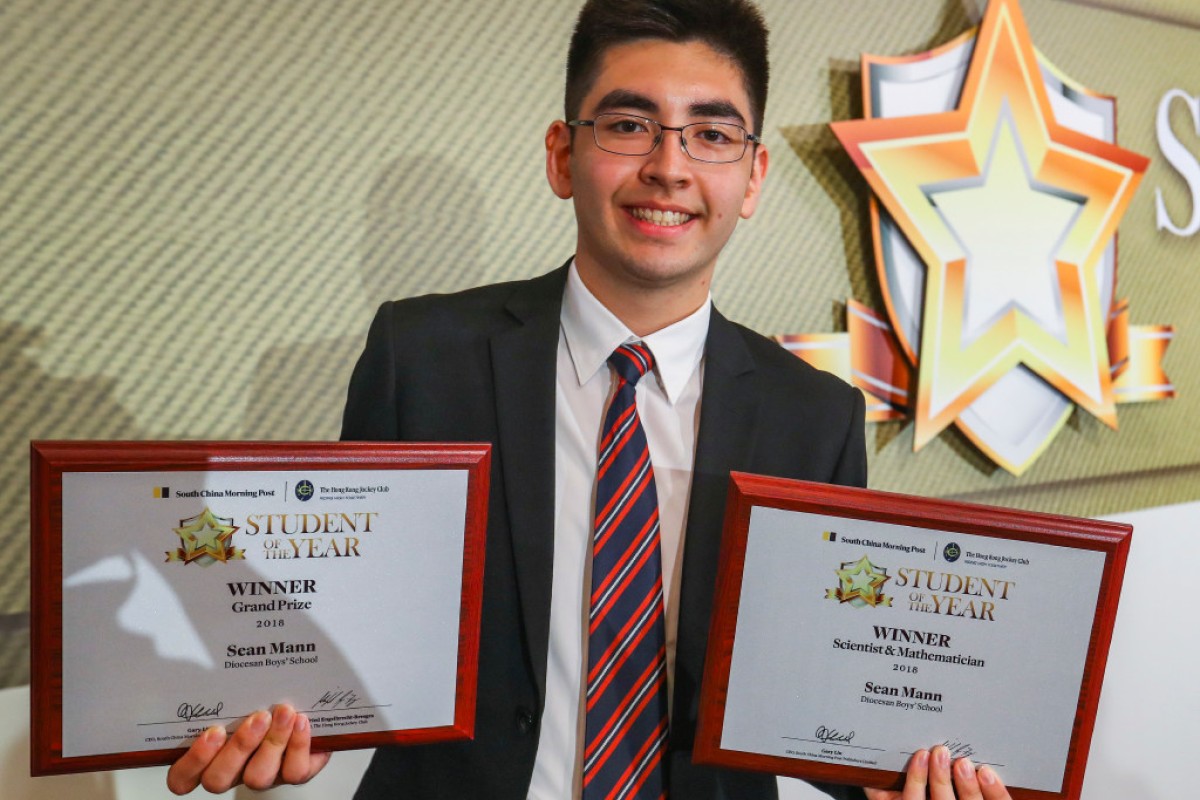 Sean Mann, this year’s Grand Prize Winner at the Student of the Year Awards, can trace his innovative thinking back to one moment three years ago. The Diocesan Boys’ School student was in his school’s robotics lab when lightning flashed across the sky. Much like the storm, a “random and stupid” idea had struck: what if we could use lightning to turn plastic into fuel?

That “stupid idea”, Sean told Young Post, led to an award-winning innovation, and paved his way to his winning both the Scientist & Mathematician, and Grand Prize categories of this year’s glittering award ceremony, which took place yesterday at the Kowloon Shangri-La hotel.

Sean, 18, has been building robots from the scrap parts of other toys since he was very young. In Grade Five, he joined his school’s robotics team programme.

GALLERY: Highlights from the 2018 Student of the Year Awards

That love of robotics persisted through the years into his secondary education, when he and a group of like-minded students set up a robotics team for the school.

“Our school is [better] known for sports and music, because we’re good in those areas,” he says. “When we started a robotics team, our school was like: ‘You’re not supposed to be competing in those competitions, because we’re not that kind of school.’”

Sean and his fellow classmates were that kind of student, though – and even though many of them had to balance robotics with their music duties, they were determined to succeed.

“It’s really about building spirit and making [the others] commit to the team to the point where they [feel as if they should] sacrifice other activities for the robotics team,” Sean, who was the robotics team captain, says. “I’m so grateful that there were quite a few students who loved robotics enough to do that.”

When asked about where his ideas come from, Sean says: “It’s really important to be stupid. Some ideas, on the surface, sound silly to begin with, but I think that’s how innovation happens.”

Case in point, he adds: his lightning-to-fuel idea. “It sounds really stupid, but when I researched lightning and looked at [the different sorts of] processes that can thermally decompose plastics – pyrolysis – I found that it’s actually possible.”

His idea eventually became this: lightning strikes a lightning rod that is connected to a chamber filled with plastic at the bottom of a building. The chamber heats up because of the lightning, and pyrolyses the plastics into fuels such as methane. After Sean and his teammates did the maths and wrote a report, they took the idea to a competition, where they won an innovation award. Sean’s dedication to an idea some might think of as outright silly or impossible had been rewarded – and that’s why he never dismisses an idea out of hand.

“I’ll explore ideas to the point where I realise that it’s physically impossible and stupid, and then I’ll stop,” he says. “I never dispose of an idea that doesn’t sound right in the first instance.”

Sean says he has always wanted to give back to society with his knowledge and talent. To this end, he once developed an electronic device to help children with ADHD (attention deficit hyperactivity disorder) learn better. When he saw his invention was being used in schools, he was thrilled.

Wins like his device being used, and his two Student of the Year 2018 victories, are just the beginning for Sean, who will move to the US to study mechanical engineering and computer science at the prestigious Massachusetts Institute of Technology.

Once he graduates from that university, he says he wants to come back to Hong Kong, and explore more ideas that don’t quite sound right from the get-go, because these ideas might end up helping society as a whole.

“I think the meaning of life is to pursue what you like and to make others’ lives better with it,” he says. “I think it doesn’t feel as rewarding or satisfying when you’re just enjoying what you like but not helping anyone else with it.”

To enable this pursuit, Sean says he wants to see Hong Kong’s education system change in future. Students in the city, he says, are expected to be very realistic in their thinking – there’s no room to be idealistic.

“They calculate everything, and estimate the returns of investing a certain number of hours in a particular activity … But I don’t think that’s how innovation or creativity happens.”

Sean says the key to success lies, instead, in not being afraid to put time and effort into pursuing your goals. That’s why, despite the pressure of exams and the fact university applications mainly look at grades, Sean wants all students to break societal expectations, and to keep an open mind to a broader spectrum of things.

“We have to go deeper and think about the meaning of life, and not just look at how to earn a lot of money,” he says.

“We need to reflect on what we actually want in life. That way, we might [go on to] do more meaningful things.”

Congratulations to all of this year's winners!
Photo: Kelly Ho/SCMP

Past Grand Prize winners on life after the competition, the transition to university, and embarking on the future