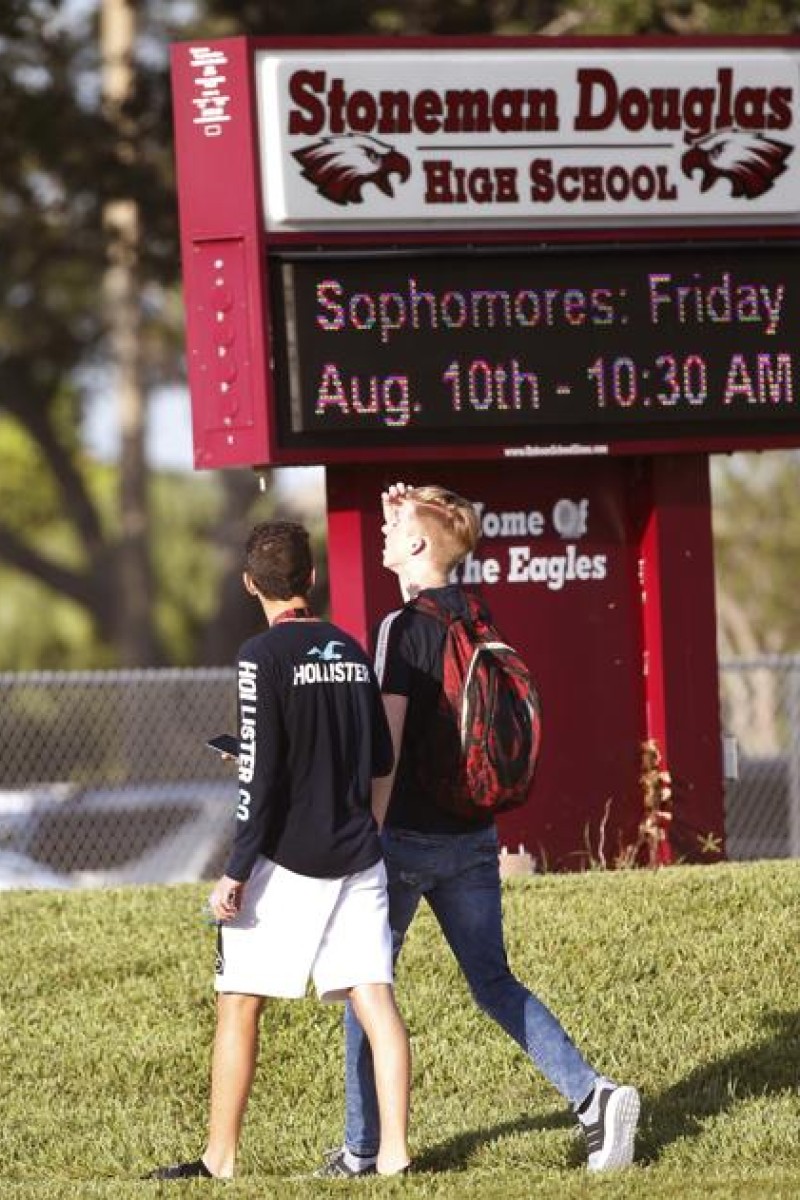 For second-year student Alexa and many of her classmates, it was a bittersweet first day back to Stoneman Douglas High 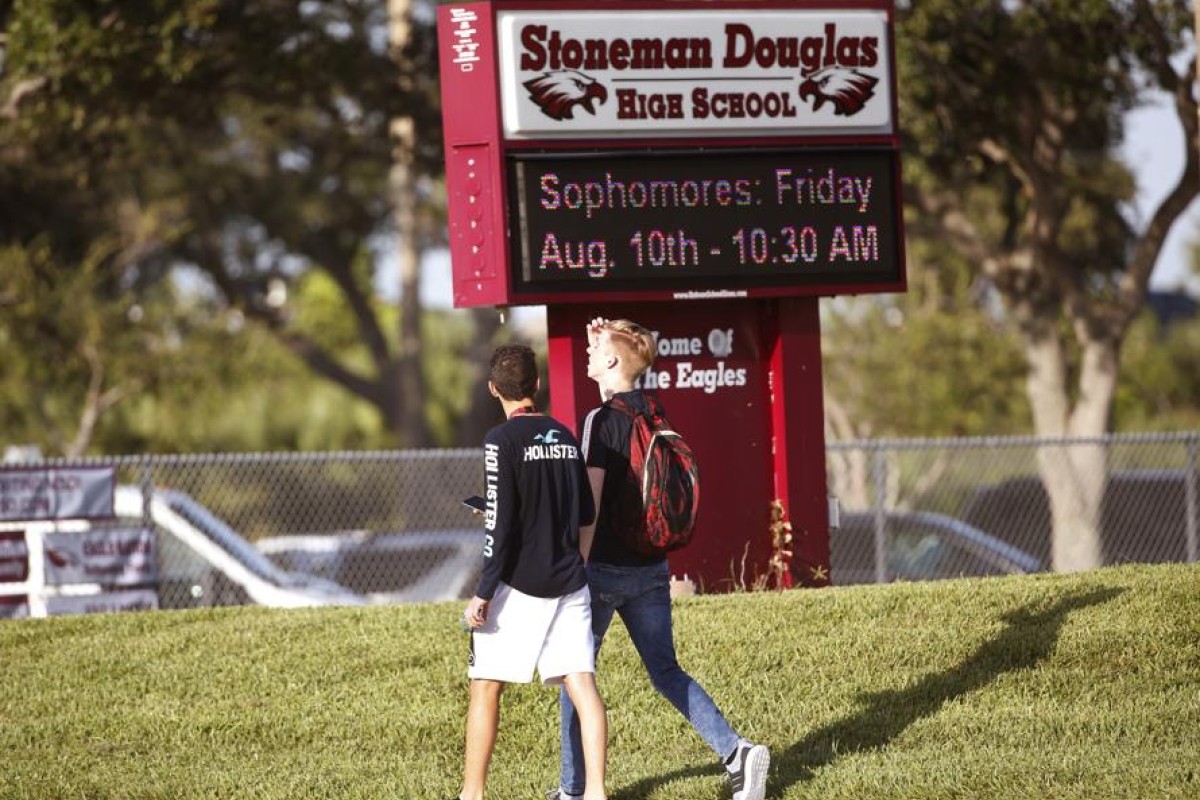 Students at the school returned on Wednesday, to a more secure campus as they began their first new school year.

Alexa Goel had the jitters, just like she usually does on the first day of school.

On Wednesday, Alexa started her second year at Marjory Stoneman Douglas High, home to one of the deadliest school massacres in the country. It’s also where the teen saw her first dead body and ran for her life from a gunman she never met.

For Alexa and so many others at Stoneman Douglas, the first day of school was bittersweet, tinged with hope for the future but darkened by grief for a day that never should have happened.

“That’s something I’ve been wrestling with,” she said. “Not wanting to let it go, but also moving forward with my life.”

At 7am sharp, Alexa, dressed for the start of school in her favourite go-to leggings and hoodie, grabbed her backpack, kissed her mum, her little sister and her poodle puppy goodbye, and then slipped into the front seat of her dad’s car. The 10-minute ride seemed quick, but somehow long, their car merging into a long line of vehicles inching their way toward the school.

She still remembers February 14 like it was yesterday. That was the day 17 classmates and teachers were slain and another 17 wounded.

Alexa, now 14, was in the first-year building that day, on the first floor. When she heard loud popping noises, she dove behind a desk, even though she told herself it was just a drill, nothing real.

Then a Swat team evacuated her classroom.

“When I walked into the hallway, I saw a body,” she said. “I went outside and saw police cars. That’s when I realised it wasn’t a drill.”

To this day, Alexa doesn’t like to say the name of the shooter.

On the ride to school on Wednesday, Alexa couldn’t help but notice the TV cameras lining the road - another new normal for Stoneman Douglas.

“Honestly I had a problem with it,” she said of the hordes of reporters who’ve bombarded the school since the day of the shooting. “I still do. We’re trying to get back to normal. And having them there, it’s a little annoying.”

A Sheriff Deputy watches as students arrive at the school.
Photo: AP

She tried to keep her mind on the year ahead. The positives: her best friend will be in one of her classes. She already knows two of her eight teachers. And she won’t have to take Spanish again.

Jimmy Fallon's speech to Marjory Stoneman Douglas High graduates will make you laugh, cry and be proud of your generation

As Alexa and her dad got closer to the Parkland school, she got a text from a friend asking why she wasn’t on the bus.

“I usually take the bus but I always get a ride on the first day,” she said.

Soon enough, it was time for her to step out of the car and make her way into school.

Her father, Parag Goel, watched as she walked away.

Alexa is still recovering from the trauma of February 14, but it’s going to take some time, he said from behind the wheel.

“It was almost like coming back from war,” he said. “You lose people you were talking to five minutes ago. She wondered if she’d just kept talking to one of the girls, if she’d still be alive.”

Back home, Alexa’s 5-month-old puppy - who’s named Arielle but answers to Ari - kept looking for her young owner from the window. Alexa’s parents brought the poodle home six weeks ago to help ease their daughter’s anxiety.

“She’s just very comforting,” Alexa said of her pup. “She relaxes me, keeps my mind off things.”

But on Wednesday, Alexa had to leave home without her.

Less than two hours after the start of school, Alexa sent her mum a text saying they were going over the drills they would have to do throughout the year.

“That made her nervous,” her mum said.

Each student returning to Stoneman Douglas will experience a range of emotions when they return to school, said Dara Bushman, a clinical psychologist in Pembroke Pines who has treated some of the students and their families.

“They may experience a rush of emotion,” she said. “They could feel anxious, or scared, or disconnected from their friends.”

Even the sight of the first-year building - where the shootings took place - could trigger bad memories and flashbacks, Bushman said.

Banners of support hang from a fence that surrounds the first-year building. For some, those banners are a symbol of love from around the world.

But for Alexa, the building is a reminder of the most painful day of her life.

March for Our Lives students on Time cover

“I hate seeing the building still there,” she said. “I hate that.”

On Wednesday, she was filled with excitement about going back to school, but nervous too. Her mood was a strange mix of hope and sadness.

She still thinks about the shooting every day.

“We’re going back to school without 17 people,” she said. “I don’t think it is ever going to go away, but it will hurt less as time goes on.”

Alexa made it through the day with a little help from her best friend - and her mum, who texted her several photos of her dog Ari throughout the day.

“I was a little anxious,” said mum, Lisa Goel. “I think I was more anxious than she was. I’m just really proud of her.”

Alexa said she missed her dog - and her dog missed her, judging by how she jumped all over her as soon as she got off the bus.

“I’m really happy to be home,” she said. “I do think it’s going to be a challenging year because I have a lot of challenging classes, but I think I can handle it.”

As for the day that haunts the entire school, she believes that will somehow get easier too.

“It’s a new year,” Alexa said. “I keep telling myself, it can’t be worse than last year. It has to be better.”