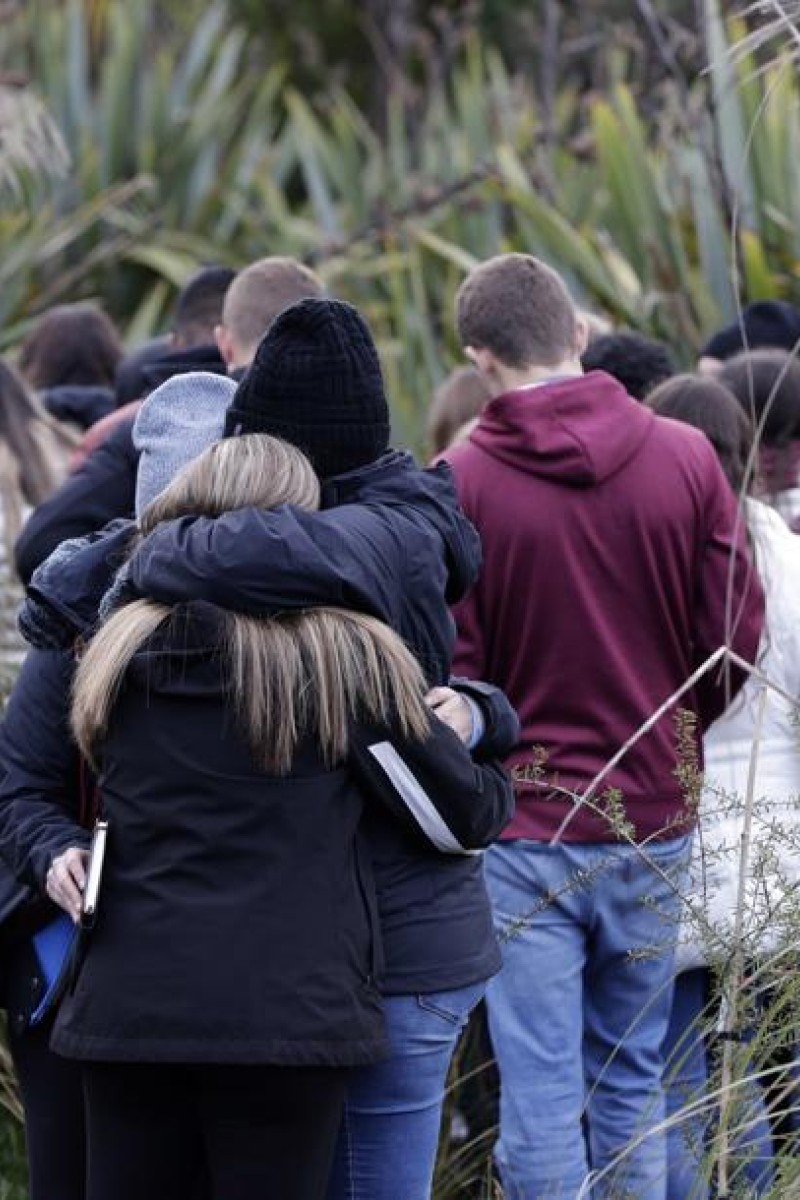 While many Marjory Stoneman Douglas High School students are taking their anti-gun fight global, one student is fighting to cope with regular life 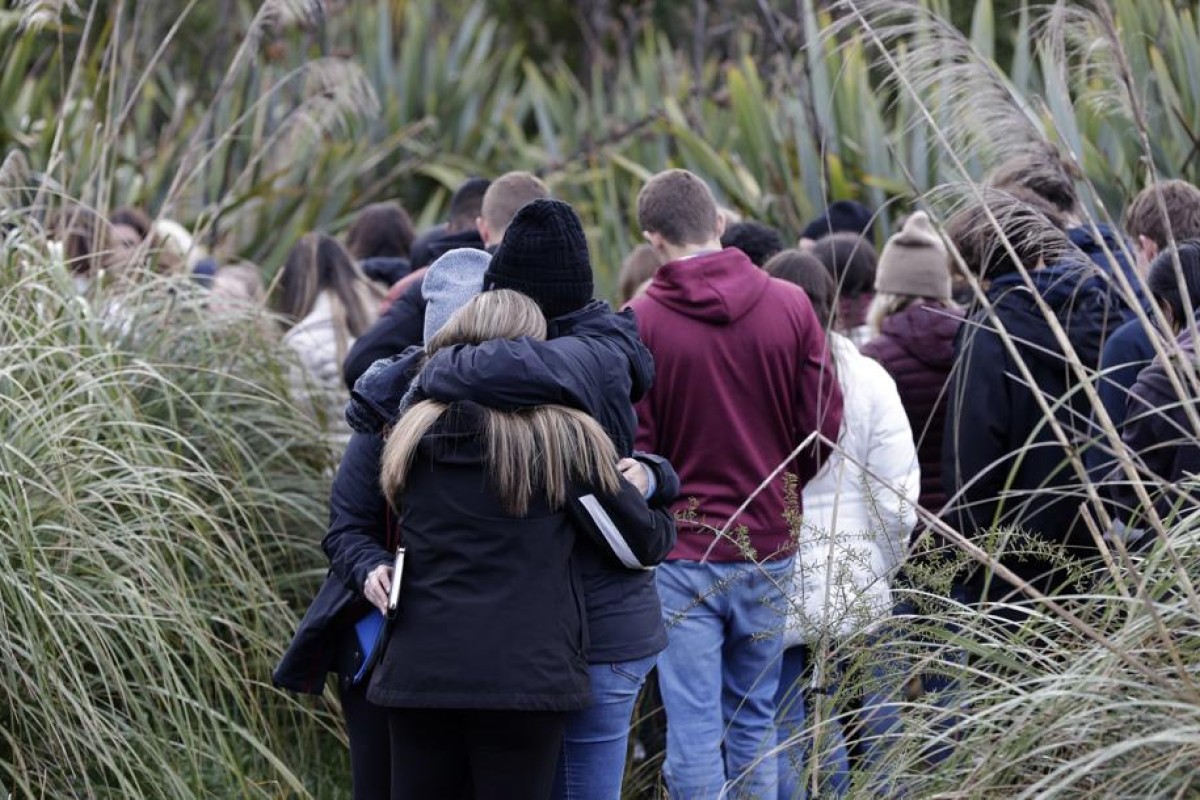 Survivors of the shooting at Marjory Stoneman Douglas High School took part in a tree-planting ceremony during a tour of New Zealand last month.

Marie Laman carefully removes a black bow tie from its box and slips it around her son’s neck. It’s his first bow tie, for his first formal dance. A moment for a mother to savour.

“I don’t want to do this,” Kyle says. He is slumped on his bed, tugging at the sleeves of his dress shirt. “This is so stupid.”

Marie, still struggling with the clasp, does not respond. Suddenly, Kyle shoves her away. “You’re choking me,” he says. “Stop. Stop!” He runs to the bathroom, slamming the door.

“Franz,” Marie calls for her husband. “You need to take over.” She goes to her bedroom and tells herself to take 10 deep breaths.

Once, Kyle had been excited about the Military Ball, a springtime event to honour the students in the junior Reserve Officers’ Training Corps (ROTC) programme. He and his friends were going to rent a limo. They were going to dance all night.

Face-to-face with the shooter

But now the 15-year-old cannot dance, thanks to a heavy medical boot that covers his foot and calf. Some other students are skipping the event entirely, still too traumatised to handle large crowds.

And three of Kyle’s JROTC classmates who should be at the ball are dead. They were among the 17 people killed when a gunman attacked Marjory Stoneman Douglas High School in Parkland, in the US state of Florida, on February 14.

Kyle, who came face-to-face with the shooter in a third-floor hallway strewn with bodies, escaped with a bullet wound to his foot. Doctors told his parents it would be a year before he could walk normally again.

No one can say how long it will take his mental scars to heal.

What should have been a happy occasion for Kyle and his mum Marie turned stressful due to Kyle’s trauma.
Photo: The Washington Post

It’s April, two months since the day Kyle was shot. He still has the rest of a difficult school year ahead of him, then a long and lonely summer packed with doctor appointments instead of days at the beach.

On the night of the ball, it’s Franz who finally leads Kyle back to his room and finishes tying the bow tie for his son. But soon Kyle storms out of the room. Marie looks at Franz and says: “This is so hard.”

It was hard before, too

Of course, it had been hard before. Marie was always nagging Kyle to clean his room. Franz tried to encourage him to stay focused on school.

“But that was normal,” Marie says. They had worked so hard for normal – family dinners on Thursday nights at the local Chinese buffet, weekend trips to Disney, a house with a swimming pool and a garden where they could play with their dog, Katie.

Their most constant source of stress had been figuring out how to shuttle the kids, Kyle and his 12-year-old sister Mya, from school to sleepovers to after school activities.

Marie, a benefits coordinator for the city of Boca Raton, Florida, had been raised by a single mother, with two siblings and few luxuries. Franz, a mechanic at a car showroom in Fort Lauderdale, Florida, immigrated from Jamaica with his family when he was 12.

“We tried to give them the life we didn’t have,” Marie said. The previous autumn, they had moved to this leafy Coral Springs neighbourhood so Kyle could attend Stoneman Douglas High – the best school in the county, in the safest city in the state.

Months later, with a single bullet, their normal was shattered.

The morning after the military ball, Marie learns that the event included a moment of silence for three slain members of the JROTC program: Peter Wang, 15; Alaina Petty, 14; and Martin Duque, 14.

There were also plans to honour Kyle with a Purple Heart, but the boy asked for the medal to be given to him in private. He didn’t want them to make a big deal about him, and he hates any mention of the shooting.

But reminders are inescapable: In the hallways of his school, where he now moves in a wheelchair and can tolerate only a few hours at a time.

Sometimes, Kyle says, he wishes he had died in the shooting. He didn’t think survival would be so hard.

“I just want to be normal,” he tells his mother.

Jimmy Fallon's speech to Marjory Stoneman Douglas High graduates will make you laugh, cry and be proud of your generation

Kyle’s injury was not life-threatening, his doctors said, but it nearly cost him his ability to walk.

Five days after the shooting, he underwent an eight-hour operation that saved his leg.

Kyle, who dreams of entering the Air Force as a fighter pilot, has always been more comfortable with guns than most of his classmates. Before the shooting, he spent much of his free time playing with air rifles with his friends. The only thing keeping him from playing right now is the heavy boot on his injured foot.

What Kyle really wants is to get back in the arena, back on his bike, back on his feet. To be the boy he was on February 13.

He was going to need help

The first time Marianne Sheehan met Kyle, “I knew I was seeing someone who was going to need help,” she says. “But no parent wants to accept that or see it.”

Sheehan, a 26-year-old Air Force veteran and firefighter, had never met the teenager before. She had flown down from the state of Vermont in the wake of the Marjory Stoneman Douglas High School shooting to deliver a handmade wooden American flag to the school.

Mutual friends connected her with Kyle’s family, and she offered to come by his hospital room with her service dog, Cooper.

The big German shepherd helped her cope with her experiences in the military, she explained to Kyle’s parents. Maybe he could help their son.

They invited her in.

Sheehan wound up staying in Parkland for three weeks, spending all her time with Kyle and other students who had been hurt in the shooting. When she returned to Vermont, she gave the teen her phone number and told him to use it whenever he needed.

At the end of April, Sheehan flies to Parkland to help Kyle pick up his new service dog – a German shepherd, like Cooper.

There’s a chorus of coos as the 14-week-old puppy emerges from its plastic crate at the airport, all big brown eyes and oversized feet.

The dog’s legs are trembling, and Kyle rubs its head reassuringly. “Bruce,” he says – the name given by the dog’s trainers. “He likes me already,” Kyle tells his father.

Bruce pees on the carpet within 20 minutes of arriving at the Lamans’ home. It doesn’t dampen Kyle’s mood.

Curled up on the couch with his puppy, he croons: “I love you. You’re beautiful, bubba.”

Sunny Florida spring turns to stormy summer. Kyle undergoes a fifth surgery and switches from a boot to a brace. Bruce grows into his big paws and overlong legs.

And life hasn’t got any easier.

Franz is pulling 10-hour days at the car showroom – “If there’s no work, there’s no money.” – and trying not to feel guilty that he can’t spend more time at home.

Kyle keeps forgetting to walk Bruce, and the puppy has peed on the carpet so many times the Lamans decide to rip it up and replace it with a wooden floor.

“Give me strength,” Marie says of her son.

Certain things begin to make sense. The way Kyle asks whether they can order takeaway instead of going out for their family dinners. His strange new fascination with zombie apocalypses and flesh-eating bacteria.

March for Our Lives students on Time cover

Sessions with a therapist

A trauma therapist starts making weekly visits to the house. She talks with Kyle for one, two hours – as long as he needs.

Kyle doesn’t always tell Marie what he discusses with the counsellor. But she can tell it’s helping him.

In July, a local pastor calls Marie and says his church raised money to pay for Kyle and Mya to attend a week-long watersports camp. The summer camp’s owner specially adjusts a wakeboard to fit around Kyle’s injured leg.

On the third day, he is finally able to wakeboard kneeling. “Mum!” he tells Marie at pickup. “I did it.”

In that moment, he sounds just like the old Kyle.

She worries about the upcoming trial for the accused gunman. It’s so hard for Kyle to talk about the attack or think about the person who shot him and killed his friends. But Kyle may have to testify, since prosecutors are seeking the death penalty.

Some of the other parents the Lamans know have joined safety commissions, raised funds for memorials, flown to Washington DC to fight for stricter gun laws.

She’s glad they’re doing it, she says, and grateful. But it’s not something she can be a part of. “Our fight is at home,” she says. “Our fight is helping our son heal. And it’s never-ending.”