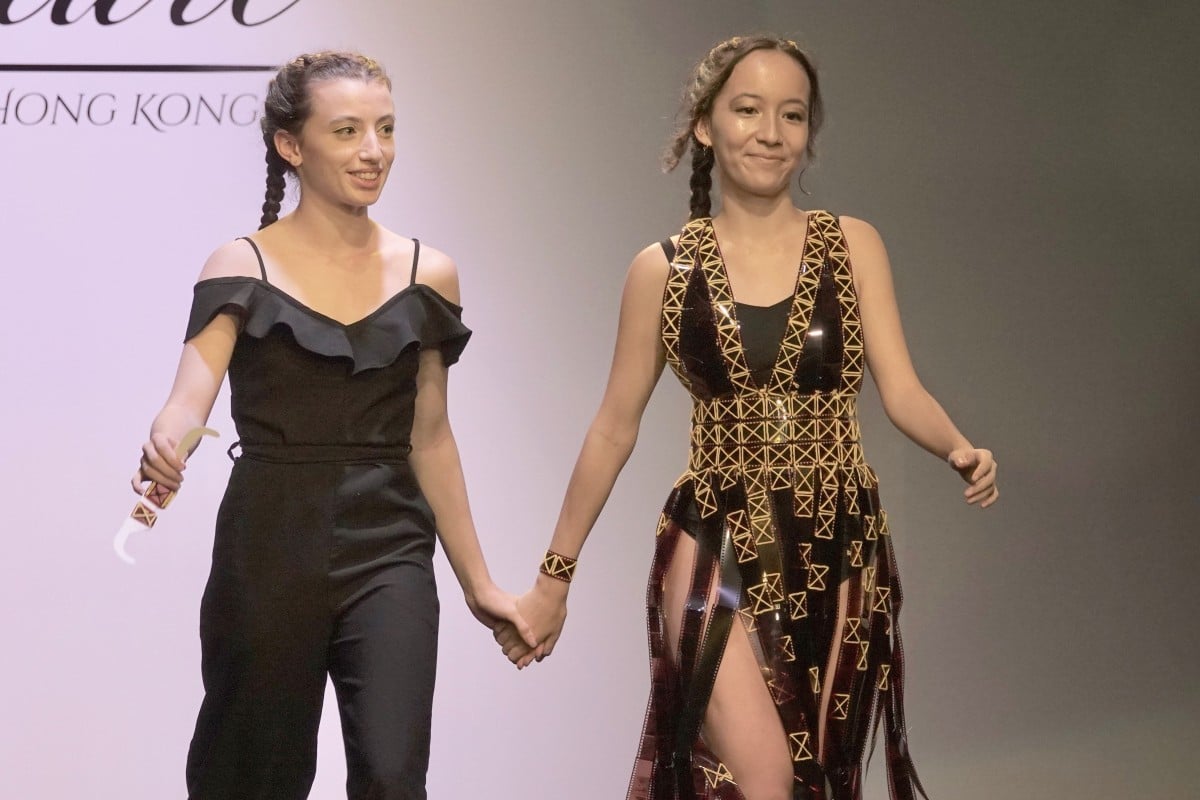 Used lai see packets, out-of-date planners, and broken umbrellas are just a few of the many items we throw away without a second thought. But 30 creative designers from French International School (FIS) were able to take seemingly useless items like these and transform them into glamorous pieces of clothing.

The event’s biggest highlight was the Les Trophées de la Mode competition, which featured Year 10 to 13 students and their spectacular designs made entirely out of recycled materials – one even incorporated broken branches from last year’s Typhoon Mangkhut into their design.

But standing out on the runway were 15-year-olds Alice Darbon and Lucy Hung who won the Best Fashion Designer award for their show-stopping black dress embroidered with criss-crossing yellow lines.

Alice and Lucy, who are both amateur film photographers, thought it would be interesting to incorporate leftover film negatives into their design. They thought the plastic film strips would be a good material to use as it is quite flexible, but said they struggled to shape them to fit the model’s body.

They added they had to rework their first design as they were not satisfied with how it turned out. After working through these minor hiccups, the two said that all that mattered, after months of hard work, was being able to share the stage with their peers.

Alice and Lucy both agreed the experience was unforgettable from start to finish.

Sasha Denham, the leader of Couture and head of the event and sponsor team, also competed. She made an evening gown out of more than 20 old DVDs cut into tiny pieces.

“When I was thinking about what I could create to match [the show’s theme] “Colour Vision”, I thought about the shifting colours you see on the surface of moving optic discs when they reflect light,” said the 16-year-old.

“That’s why I used them as the main component of my design.”

More colour was added to the show by the stunning collection created by a group of four student designers. The youngest among them was Lauren Ramanantsoa, 15. She presented four pieces of brightly-coloured street wear made up of leftover or defective fabrics, hoping to make street wear look not only fun and young, but also elegant.

“By using colours creatively, I knew I could give a completely new life to the fabrics which would otherwise go to waste,” she said.

Her favourite in the collection was a bright outfit inspired by New York’s yellow taxis, which consists of a cropped top and a high-waisted wide-leg pants.

“New York City is where I was born and raised. The design came to me almost naturally, perhaps because of how dear the place is to my heart,” she said.

“The outfit embodies the spirit of the city in a very elegant and fashionable way, and carries a part of me in it.”

“Walking [on the runway] in front of so many people was a little stressful for me, as I can be a little shy” said student model Capucine Vallier, 18. “I also had to practise walking in high heels [which I seldom wear],” she added.

Despite these challenges, Capucine said she enjoyed the experience.

Many were involved in making this event a success, including 18 student trainees from Make Up Art Academy Paris School who took care of the models’ hairstyle and make-up, the show’s art director, teacher Isabelle Bezançon, and 18 student organisers, who are all IB Visual Arts students. They include Sasha and Agnes Shu, the show’s media and promotion team manager.

“For me, organising the photoshoots was the most challenging task because I had to make sure everyone on the team knew exactly what they had to do, without missing any shots specifically requested by the sponsors,” said 16-year-old Agnes.

“[But] it was a very cool experience to work with so many different photographers and sponsors.”

The event is in support of local environmental charity Redress which aims to promote sustainability in the fashion industry.

SCAD fashion students on creating a collection, the importance of prioritising, and knowing your strengths and weaknesses