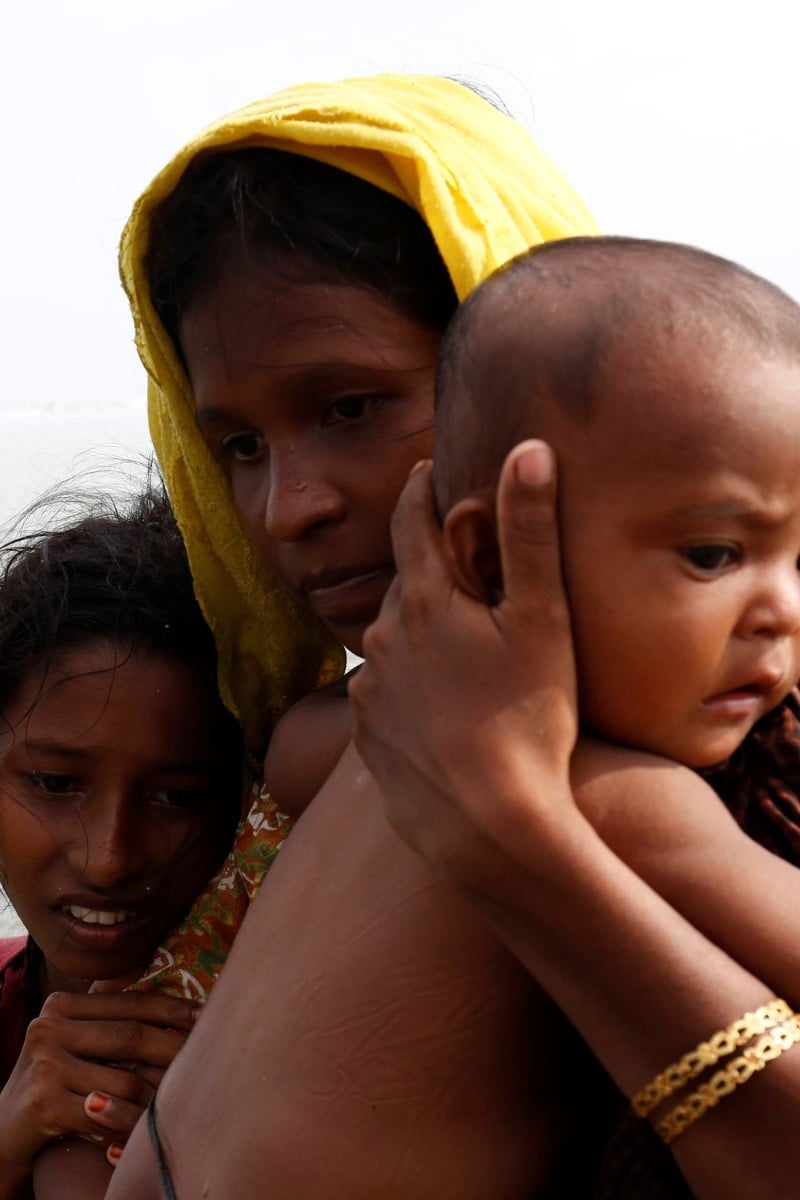 Described as the world’s most persecuted people, tens of thousands of Rohingya are fleeing the country. 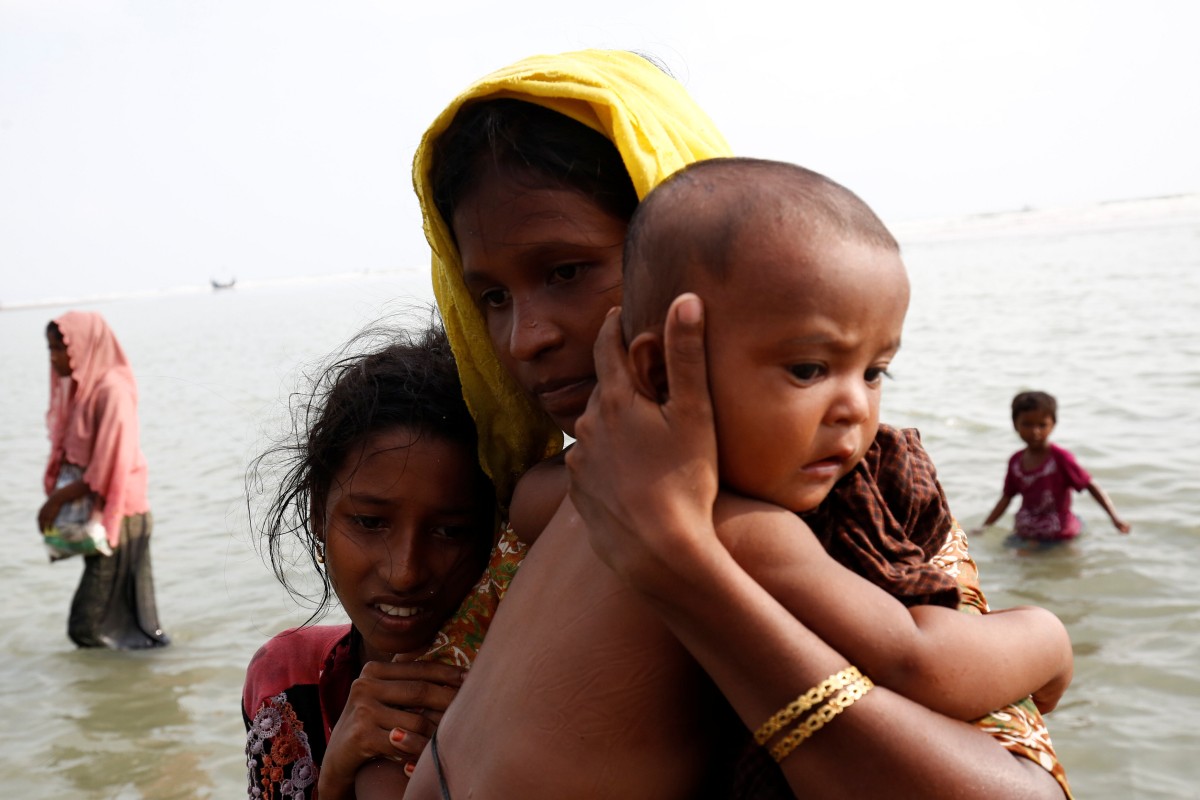 Rohingya refugee woman and children wade to the shore after crossing the Bangladesh-Myanmar border by boat through the Bay of Bengal in Teknaf.

Who are the Rohingya?

Described as the world’s most persecuted people, 1.1 million Rohingya people live in Myanmar. They live mostly in Rakhine state, where they have co-existed uneasily alongside Buddhists for decades.

Rohingya people say they are descendants of Muslims, perhaps Persian and Arab traders, who came to Myanmar generations ago. Unlike the Buddhist community, they speak a language similar to the Bengali dialect of Chittagong in Bangladesh.

"Either they die, or we die" - the harsh reality of life for the Rohingya

The Rohingya are hated by many in Myanmar as illegal immigrants and they suffer from a lot of discrimination. The Myanmar government treats them as stateless people, denying them citizenship. Tough restrictions have been placed on their freedom of movement, access to medical assistance, education and other basic services.

What has been happening to them?

Refugees have spoken of massacres in villages, where they say soldiers raided and burned their homes. The government claims the Rohingya have burned their own homes and killed Buddhists and Hindus, a claim repeated by some residents.

Aid agencies have warned of a growing humanitarian crisis in overstretched border camps and of the dangers facing Rohingya people trapped in conflict zones.

How many have been killed, injured or forced to flee?

The military has reported that 400 people have been killed in the violence. The UN says 123,000 people have fled to Bangladesh. Those who have made it to the border have walked for days, hiding in jungles and crossing mountains and rivers. Many are sick and some have bullet wounds.

More than 30,000 Rohingya are estimated to have sought shelter in the refugee camps of Kutupalong and Nayapara in Bangladesh, which are now believed to be full. Many others are living in makeshift sites and local villages. An unknown number could still be stranded in a narrow strip of no man’s land that separates the two countries, where access to aid is limited. Around 400,000 stateless Rohingya people are thought to be trapped in conflict zones.

On Tuesday the UNHCR, the UN’s refugee agency, said it was “gravely concerned” about the continuing conflict and about reports that civilians had died while seeking safety. On Monday the UN said its aid agencies had been blocked from supplying life-saving supplies such as food, water and medicine to thousands of civilians in northern Rakhine state.

What’s the background to the story?

For decades, ethnic tensions have simmered in Rakhine state, with frequent eruptions of violence. Last October nine police officers were killed by armed men, believed by officials to be Muslims. Amid the ensuing violence, 87,000 Rohingya Muslims fled to Bangladesh and government troops expanded their presence in Rakhine state.

At the time, a senior UN official alleged that the Myanmar government was seeking to rid the country of its Muslim minority – an accusation that has repeatedly been made by human rights groups. The government denies the charge.

Last month, Myanmar further increased the number of troops in Rakhine, after seven Buddhists were found hacked to death. The buildup of troops prompted warnings of a fresh wave of violence .

The most recent violence is seen as a major escalation not only because of the scale, but also because of the involvement of a new Rohingya militant group, the Arakan Rohingya Salvation Army. It says the attacks on government forces were an act of self-defence.

What is the Myanmar government saying?

As well as claiming the Rohingya are burning their own villages and killing Buddhists and Hindus, the Myanmar military has said the majority of those killed in the violence were “terrorists”. Such claims are impossible to verify, as access to Rakhine is limited.

The government has accused international aid workers of helping “terrorists” besiege a village in Rakhine state. The claim was condemned as dangerously irresponsible by aid workers, who fear for their safety.

The Myanmar government has repeatedly denied accusations of “ethnic cleansing”. In June it said it would not cooperate with a UN investigation focusing on allegations of killings, rape and torture by security forces against Rohingya Muslims.

Why hasn’t Aung Sun Suu Kyi done anything about it?

When Aung San Suu Kyi rose to power there were high hopes that the Nobel prize winner would help heal the country’s entrenched ethnic divides. But she has been accused of silently standing by while violence is committed against the Rohingya. International pressure is growing on her to curb the military operations.

Last year she appointed Kofi Annan, the former UN secretary general, to lead a commission looking at long-term reconciliation in Rakhine state. But she has failed to criticise violence against the Rohingya.

Some argue that Aung San Suu Kyi fears an unpredictable military. Despite her position as state counsellor, the military has retained significant political power, with an allocated 25 per cent of seats in parliament.