Ed Sheeran's hometown celebrates the singer-songwriter with an exhibition of his pre-fame life: guitars, photos and a puppet from 'Sing' 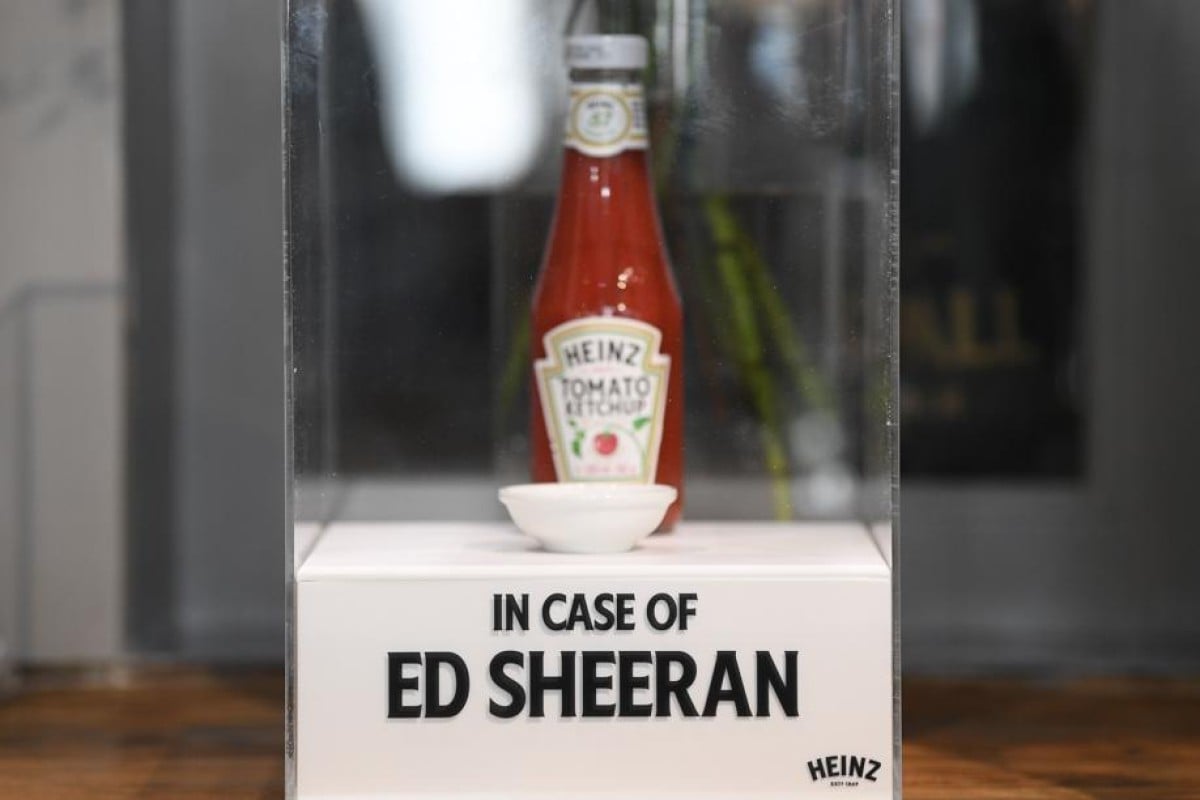 This bottle of the red sauce is kept in case the singer pops by the pub.

The little-known town of Ipswich in eastern England has historically prided itself on farming and football. But is now celebrating the stellar pop career of its most famous son: Ed Sheeran.

The global hit machine’s journey to stardom began in the nearby town of Framlingham, where he played his first gig in front of around 30 people.

Fourteen years later, the singer is capping off a two-year international tour, on which he played for almost nine million people, with four homecoming shows in Ipswich.

An exhibition entitled “Made in Suffolk”, will mark the event, tracing the career of the singer/songwriter responsible for hit singles such as Shape of You, which helped him amass a £160 million (HK$1.53 billion) fortune.

The exhibition reveals his steely determination to make it in the music business, and the unfailing support of his parents, who sold merchandise during his early concerts.

A video montage follows his journey from babyhood to adulthood, with his round face and distinctive red hair a constant presence as he tries his hand at the piano, drums and the guitar, always with a smile on his lips.

A written account details how as a boy Edward Christopher Sheeran sang in the choir and played cello in the school orchestra in Framlingham, while a photograph captures him busking in the street, guitar case open to accept donations, aged 13.

Ed's latest album is a long, long way from his roots, busking in the streets, with collabs from Camilla Cabello, Khalid, Cardi B, and many, many more superstars

Ian Johnson, who spotted Sheeran when he was 16 and helped him break through, explained how he was “impressed with ...  the way he engaged the audience at that  age”.

Sheeran’s career took off with the 2011 release of his first album, +, and a further three so far, which included a series of hits such as Don’t; Thinking Out Loud; and Castle On The Hill, which explores his love of growing up in rural Suffolk.

The exhibition presents both the superstar who electrifies crowds at concerts in Asia, Europe, Australia and the United States – captured by photographer Mark Surridge – and also the four-time Grammy winner’s more private side.

A bronze sculpture depicting a young Ed and his brother embracing each other is on show, as well as several drawings, including an Andy-Warhol-inspired self-portrait in orange and black, his favourite colours.

A series of portraits by the Irish painter Colin Davidson, who counts Britain’s Queen Elizabeth as one of his previous subjects, reveal “the Ed I think we might see whenever he’s seemingly unaware of anyone else being in the room,” he said.

“I like to think that’s the mood that he’s in whenever he’s on his own, creating his work or writing songs,” added the painter.

Other highlights of the free exhibition, which runs until spring next year, are two of his guitars, one of which he named “Cyril”, and which starred in more than 300 concerts in 2009.

There is also a puppet of the performer used in the video clip for Sing.

In Ipswich, the superstar is a hero.

This bottle of the red sauce is kept in case the singer pops by the pub.
Photo: AFP

The Swan pub in the town centre sells postcards and other memorabilia, and even keeps a bottle of Sheeran’s favourite ketchup in a plexiglass box “in case Ed comes”.

Singer Barny Holmes, who jammed with Sheeran about 10 years ago, said his success could be explained partly because “everyone can relate to an underdog”.

“He was a sweet guy that you just didn’t expect to have such a big presence,” Holmes said after a gig in the pub.